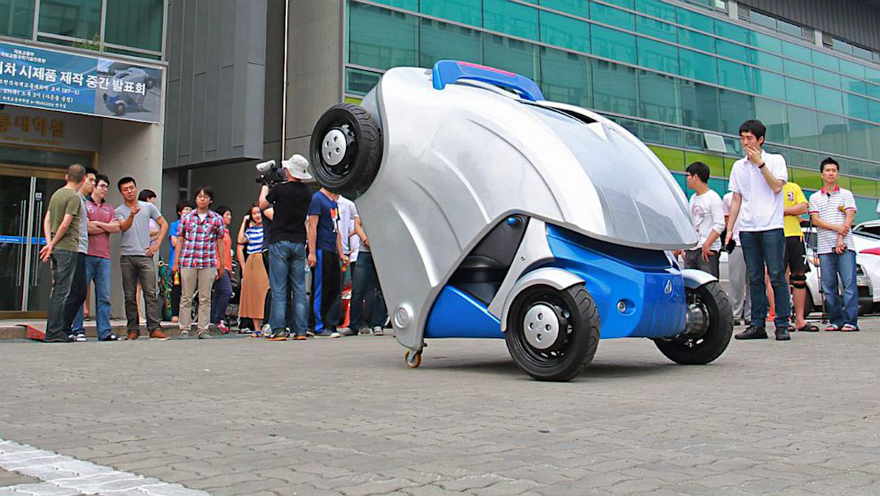 Korea Advanced Institute of Science and Technology (KAIST) recently unveiled a new concept car to add to the plethora of electric and space efficient vehicles. The research group headed by In-Soo Suh, Associate Professor in the Graduate School for Green Transportation, revealed a vehicle inspired by how an armadillo in the wild responds when faced with a predator. KAIST has been making major contributions to the electrical vehicle movement recently with their road charged buses and now with their car aptly named the Armadillo-T. Employing textbook biomimicry, the vehicle achieves its armadillo-like transformation when the rear body of the car tucks over the front covering the windshield. The resulting decrease takes the body of the car from a fully extended 110 inches to 65 inches in its folded position.

Professor In-Soo Suh comments on the car, I expect that people living in cities will eventually shift their preferences from bulky, petro-engine cars to smaller and lighter electric cars. Armadillo-T can be one of the alternatives city drivers can opt for. Particularly, this car is ideal for urban travels, including car-sharing and transit transfer, to offer major transportation links in a city. In addition to the urban application, local near-distance travels such as tourist zones or large buildings can be another example of application.

We appreciate the sentiment, echoing Smart regarding their Bo Concept collaboration a few months ago. The issue still stands that most metropolitan cities don't full embrace EVs because of lack of infrastructure for convenient charging. Thus, the 'urban travelers' are less likely to buy them despite the fact that their small size is intended for city us. Still, New York does have one the fastest growing markets for electric vehicles ranking third behind Los Angeles and San Francisco, according to the Village Voice, news that bodes well for a future herd of Car-madillos cruising down the Brooklyn-Queens Expressway. 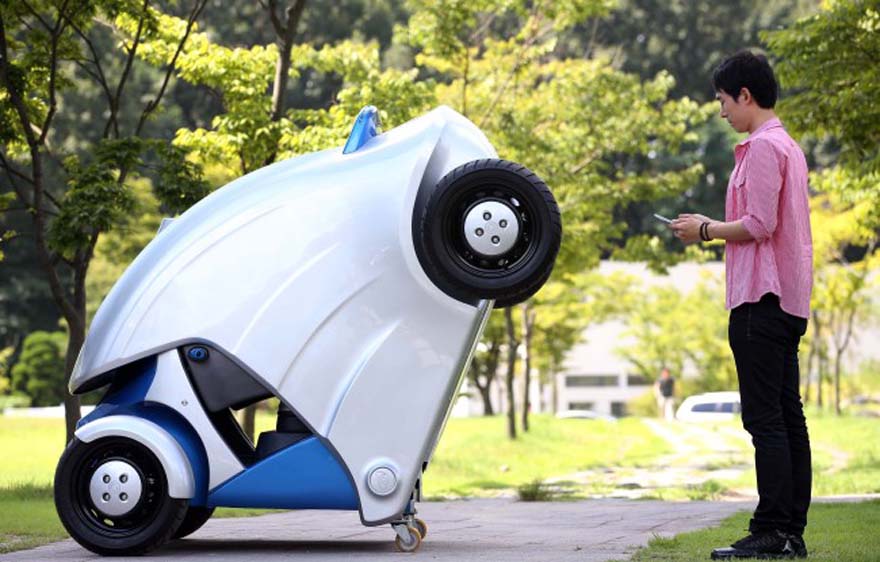 The Armadillo-T does manage to beat the overall length of the Smart Fourtwo (which clocks in at just over 106 inches in total length), but it might be argued that the folding concept car is more artfully realized in the MIT Media Lab's Hiriko CityCar. I expect with the brand new line of 2013 Smart Cars that are now fully electric, the novelty of the folding car (particularly those which seem to borrow directly from the classic Smart car silhouette) won't take hold until they offer greater passenger capacity, style or something other than the decreased inches and elaborate mechanics in order to fold. Even though the claim of fitting three of the Armadillo-T cars in just one South Korean parking spot sounds impressive—first we need to find a smarter way to charge these EVs (and then maybe just make smaller parking spots).