Outlier's Patent-Pending Pivot Sleeve, and How It Came to Be 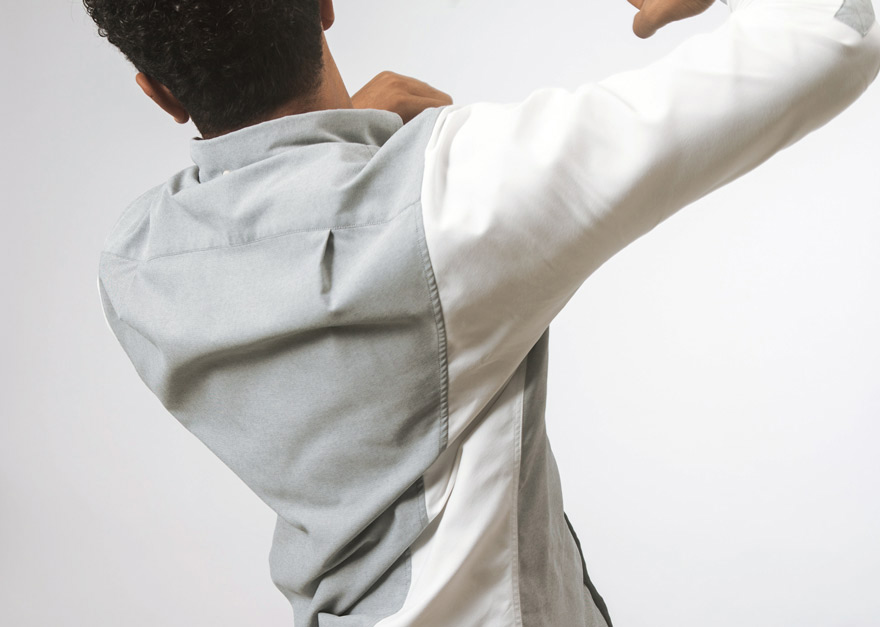 Regular readers of Core are likely aware that we're big fans of local clothiers Outlier. Founded on their mutual interest in designing cycling clothes disguised as regular ones—think slacks and button-ups—Abe Burmeister and Tyler Clemens joined forces in 2008 to create a pair of pants; their first shirt came the following year. By combining performance-oriented materials with contemporary tailoring—check out the case study on their dungarees—they've outgrown the bike-commuter niche and it's safe to say they're now making some of the best garments on the market today (I've said it before, but I basically live in three-way shorts during the summer).

Working with longtime collaborator Emiliano Granado, they've recently produced a video of their patent-pending 'pivot sleeve,' which happened to be another candidate for the case study, if not for the fact that there is actually IP at stake. "The Patent Pending Pivot Sleeve was born trying to solve what we thought was an isolated problem, but the solution turned out to have far wider uses. It's quite simply a button up shirt designed to give you a wider range of motion, and in the process it also manages to both fit and stay in place better as well."

We wanted to create a dress shirt using traditional non-stretch shirting fabrics that didn't bind at the shoulders and across the back when we leaned forward on our bikes. We studied everything we could get our hands on, various tailored shirts, mountain climbing jackets and even the gear that George Mallory used in his fatal yet stylish attempt to summit Mount Everest in the 1920's. Ironically we probably learned the most from a couple overpriced high fashion shirts we bought on clearance in the depth of the financial crisis of 2008.

It took them a year of experimentation to create "something that was genuinely new (at least to the extent of our knowledge and research)," for which they were able to file a patent. At first glance, it simply looks like an extra side panel for a dress shirt... but try on one for size (Open Studio every Friday afternoon!) and it's hard not to be impressed by the subtle but noticeable improvement to range of motion.

A one piece sleeve that flows seamlessly into the back of the garment, creating a rear side panel in the process. The pattern piece for the sleeve becomes L-shaped. At the critical pivot point at the shoulder the fabric lies on the bias, naturally stretching exactly where it is most useful. Removing the rear arm seam prevents the shirt from both binding across the back and pulling untucked when you move your arms, so you both look sharper and are more comfortable. Finally the rear side panels allow for a much more refined shaping of the shirt than traditional constructions. A dress shirt designed to look better, fit better and allow you to move without restriction.

The new Air-Forged Oxford, which features the sleeve, has nearly sold out since they introduced it yesterday; curious to learn more about how it came to be, I reached out to Abe, who pointed me to a making-of documentary from '09...

It turns out filmmaker Michael Kim captured footage of the experiment that would become the Pivot Sleeve over the course of several visits to Manhattan's Garment District. The trailer, above, is more or less all you need to watch—check out beardless Abe!—but I was also interested to see that the text that accompanies the piece offers a fascinating account of the salad days of what is now a rapidly-growing operation based in Williamsburg, Brooklyn. Here is a slightly abridged version:

Outlier is a clothing company owned by Abe Burmeister and Tyler Clemens, based in Brooklyn, NY. Since they produced their first garment—pants—in 2008, Outlier has carved out a niche in two highly-saturated markets: fashion and cycling. Their company tagline "tailored performance" refers to their primary inspiration and motivation as urban bike commuters. From pants, they've worked to expand a line of clothes they consider "future classics," incrementally adding to their catalog rather than reinventing itself each season like traditional fashion companies who release new products while discontinuing previous ones.

Only Tyler currently works full-time for the company and they have yet to establish a permanent, dedicated physical office. Regardless, we were drawn to Outlier's story because it underscores so many of the challenges involved in running a small business, especially in New York City. Since they produce locally, we were particularly curious to see how their production process worked when so much of New York's once mighty garment industry has been offshored and lost. Visiting the garment district today is a clear reminder of that past; it still remains a hive of small-business activity, albeit smaller and less visible.

Our visits with Outlier over the course of six months to the garment district showed us a network of small businesses, a microcosm of the city at large with its layers of interdependencies. As they will readily acknowledge, Outlier is a business born of and reliant on New York's resources. Outlier proves how despite knowing little about clothing, good ideas and resourcefulness can go a long way in establishing a business.

And still, Outlier represents a paradoxical bind many manufacturing companies face who market a "local" brand while depending on the Internet for sales. In some ways, Outlier has no choice but to use the city's garment factories. Because they promise a high level of quality and because their production runs are relatively small, what cost savings that may be gained by offshoring production are minimal at best. Local garment factories, only a bike ride away, can be easily monitored and more importantly, relations easily formed.

The paradox emerges on the income-earning end of Outlier's business, where the retail industry's standard markup structure makes a traditional distribution-based business model cost-prohibitive for small businesses that operate on already slender margins. While they are able to locally produce high-quality goods, Outlier finds itself unable to fully benefit from the benefits of New York City's retail scene. Instead, the company experiences a strange inversion of globalization's supply chain by boasting of a hyper-localized manufacturing system while having to depend on the internet's placeless-ness for sales.

That said, for small companies like Outlier, while it makes good sense—business, personal, political even—to produce everything locally, we wonder how long this production model can be sustained. Already, in the course of our filming, Outlier's locale expanded, slightly yet meaningfully, across the Hudson River into New Jersey.

The video posted here is a short trailer for a much longer feature-length profile documenting the development and production of a shirt. The full-length feature learns about Outlier by observing the company at work, following Abe and Tyler as they figure out how to make a shirt that meets their own exacting standards.

Outlier's Patent-Pending Pivot Sleeve, and How It Came to Be