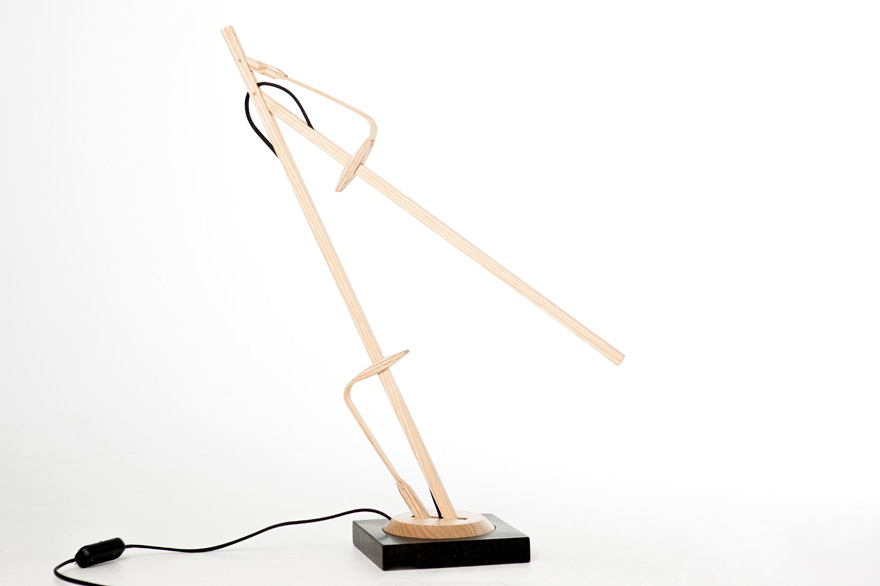 About a year ago, James Smith set out to design a lamp with what turned out to be a challenging set of parameters. With a bachelor's degree in product design and sustainability, and an apprenticeship in cabinetmaking, Smith, who is based Cornwall, England, aimed for something with a simple, stripped-down appearance that was made sustainably. "I wanted to try and create a lamp that has the same sort of functionality as angle pulleys—and to do it all using timber and as many natural materials as possible," Smith says. "It was an exercise in structure and engineering to see what I could achieve without any mechanical components."

Smith chose ash wood as the base material—not only because it's fast growing and indigenous to the UK, but also because he could source the strips from a place he has a connection to: his parents' farm, which has some forestland as well as livestock. When a tree needs to come down, Smith buys the lumber from his father. 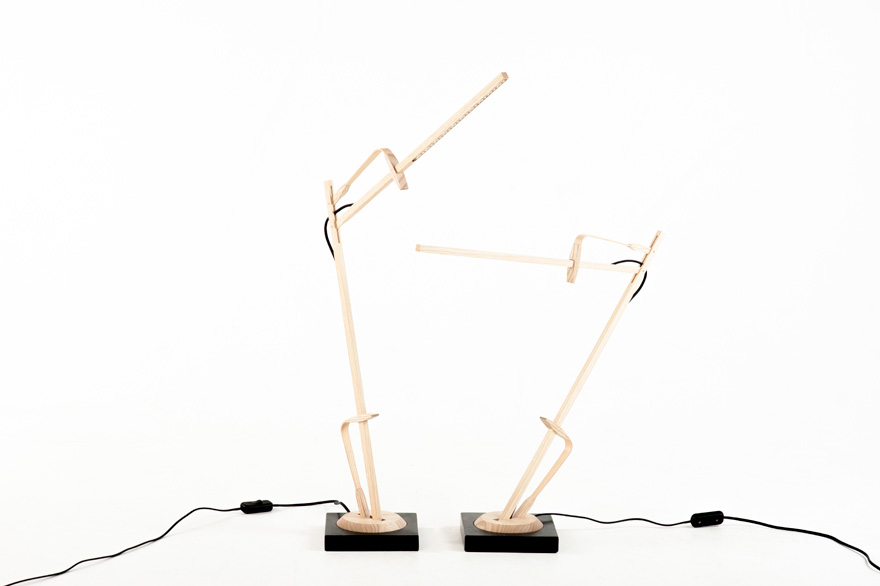 All photos by Artur Tixliski

While the look of the lamp was determined early on, it was the mechanics that posed the biggest design challenge. Figuring out a solid way for the lamp to crane and tuck—and stay in place—took some 30 or so iterations. Smith would, for instance, try out a bowed structure or run cables through the wood; then, after five or so attempts that left sagging limbs or a glut of unnatural materials, he would move on to something else.

In the end, the wood presented its own solution. Smith got to thinking about how hunters or wildlife watchers can get pretty high up in the trees with a fairly simple device called a climbing tree stand. At its most basic, the stand is a rectangle fastened around the tree's trunk. When it's tilted forward, the top edge of the rectangle's back and the bottom edge of its front wedge against the tree and lock the stand into place. It's effective enough that people feel comfortable sitting high off the ground. Smith wanted that kind of security, but on a smaller scale.

So Smith created his own wood-climbing system of sorts. His lamp needed two secondary arms to allow for a full range of tilting maneuvers. Smith made square cutouts in these secondary arms that were just big enough to thread the lamp's main arms through. "There's a millimeter of space that lets [the main arms] rotate a tiny amount—just enough to release the cantilever," Smith says. Once the user has moved the lamp to the desired position, simply pressing on the secondary arm beside the cutout will hold things in place. 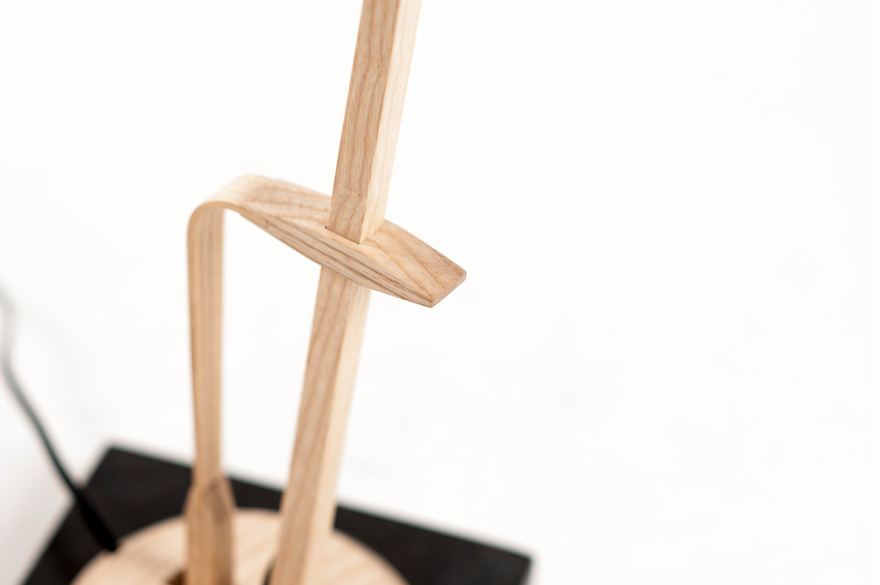 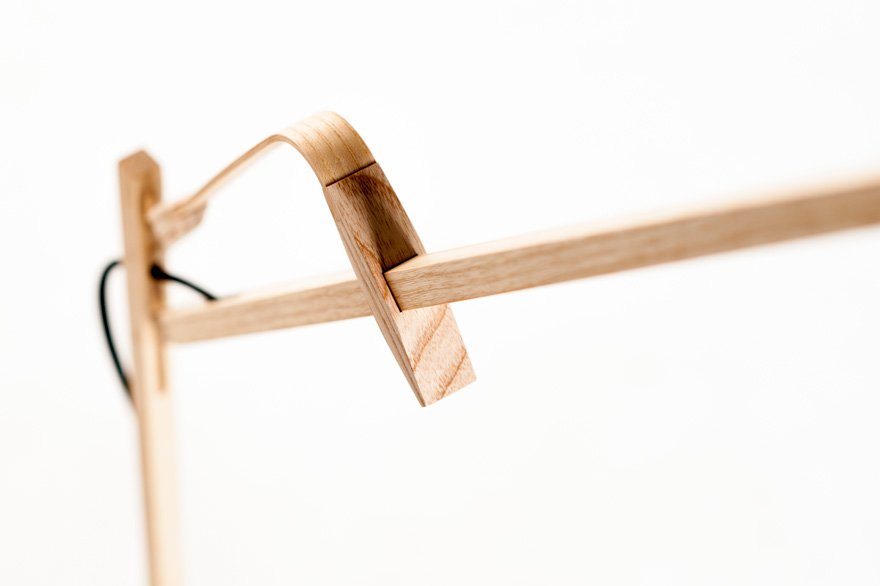 The secondary arms are made of three parts: a base, a long curved piece, and a top piece with the square cutout. For the curved portion, Smith glued together six pieces of thin veneer and pressed them into a mold. 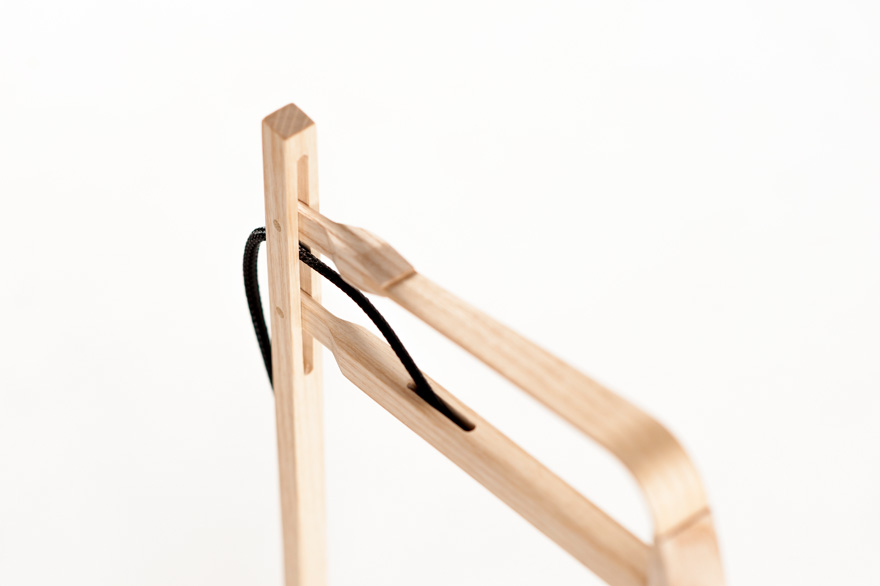 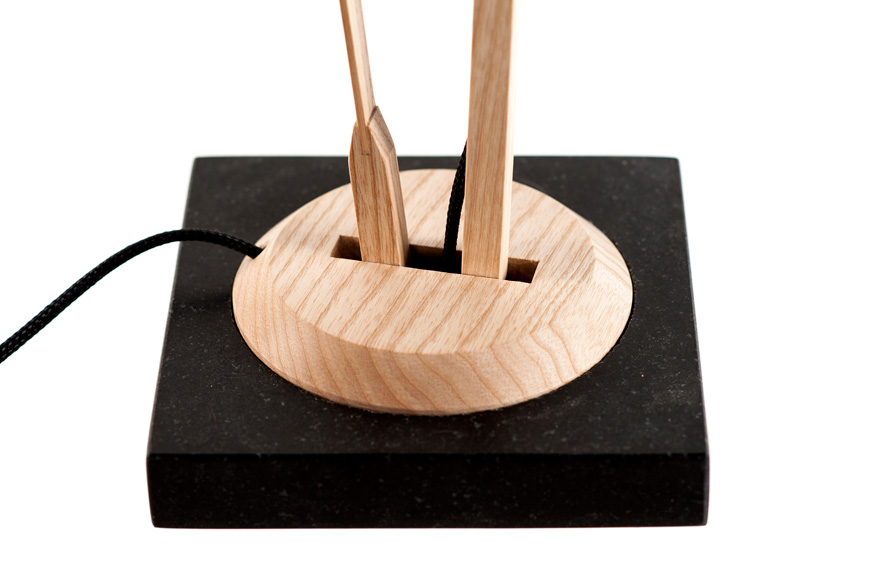 Smith's deceptively simple Task Lamp will debut at 100% Design, which begins in London on September 18.