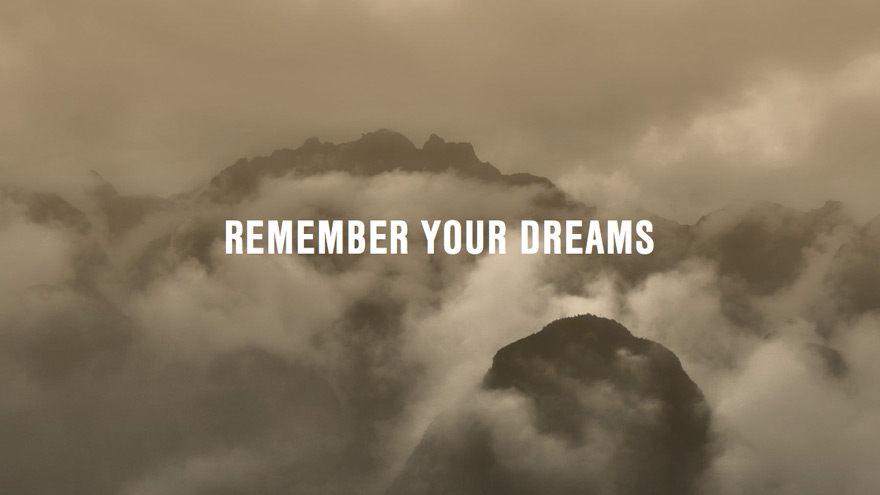 Hunter Lee Soik is no stranger to the creative process. He's worked as a creative consultant on Jay-Z & Kanye West's Watch The Throne tour and is now taking on the app space. Soik and co-founder Jason Carvalho created SHADOW, an app that helps users record and track their dreams through a process of waking them at the perfect time so they can remember and record descriptions on their phones. (You know, those enlightening few moments when you can barely remember what was going on in your head overnight.) The goal: To create a community of dreamers with accessible data on dream patterns from users around the world.

The Kickstarter campaign launched this morning and has already raised $8,400 of its $50,000 goal. We took a few minutes to chat with Soik on his favorite parts of the app and where he sees the "dream community" in five years.

Core77: What was the process of creating SHADOW like and how did you test the app?

Hunter Lee Soik: We're focused on two things: Assembling a great team and building a great product. We've shared alpha versions of the app with the team and advisors, and their feedback has really influenced the product we're building. We're a small team, but we're all over the world. I'm in New York, my co-founder Jay is in Vancouver, our design and engineering are in Berlin. So geographically and culturally we have a lot of diversity, but we also have this dream in common. This variety of input has been invaluable, so we decided to open that feedback loop up even more and ask our Kickstarter backers to help steer the development by telling us which device they want the app on first.What was the toughest obstacle you came across?

We definitely have the same challenges as all other startups: Too much work, too little time. But we thrive in this environment. Risks and challenges are part of the fun of building something. We've been fortunate that we've encountered very little resistance. People have really gravitated toward the idea. 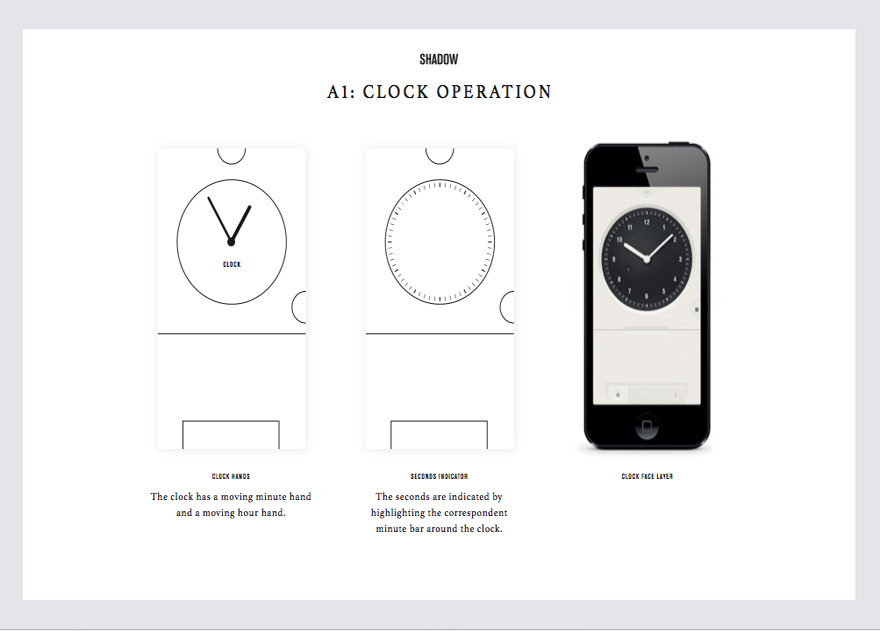 Tell me about your "a-ha" moment with this project.

The idea for SHADOW was sort of a byproduct of designing brand experiences. I loved that work. It's incredibly stimulating. But it's also a 24/7 kind of job, and I rarely slept. So when I finished up my work with the Watch the Throne tour, I decided to take a break. And I did what most people do when they suddenly have a huge amount of free time: I slept. A lot. It had been years since I was sleeping deeply, hitting those REM states where the real dream magic happens, and now suddenly I was having all these incredible dreams that I wanted to remember. I checked out the apps, but nothing really spoke to me. They didn't look how I wanted them to look or function how I wanted them to function. I wanted a more social experience. So I decided to make one.

Where do you want to see this project in five years?

The dream is to have amassed a huge user base and a giant global data cloud that allows us to answer really precise questions about our dreams. So not only can individuals see their dream patterns, but on a global scale we can see what people dream about in particular places and at key moments. What do people dream about after a rainstorm? On their wedding night? After a natural disaster? The system is robust enough to collect this data and connect the dots; all we need to do is get people using it. 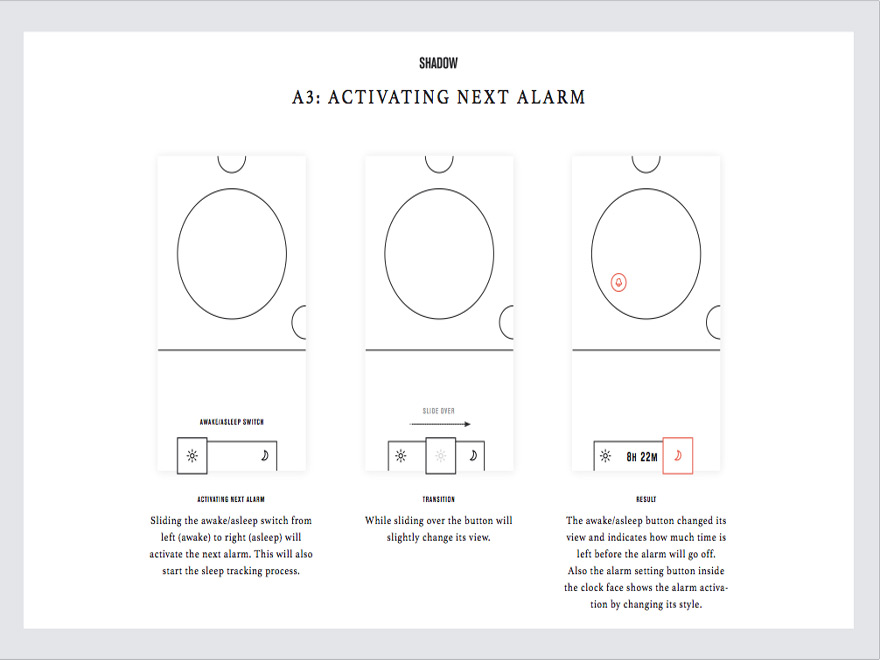 Tell me a little bit more about the community of dreamers. How do you see that developing?

Right now, quantified self is all about measurement: Using new forms of technology to collect data on different areas of your life. But we want to bring psychology into the equation, and help quantified self evolve into understood self. So the big question is: What do we do with this data? How does it help our lives? What we decided was actually pretty simple: To scale, we need to move beyond individuals and build a community. To make the data meaningful, we need to share it. To the average user, this will be a bit of a shift, because we're used to treating dreams as very private experiences. But that's part of the SHADOW challenge: to think beyond our little pocket of experience and recognize the dream tropes that connect all of us. Just in testing the app, we've found that once people get comfortable sharing, they're blown away by what they can learn about themselves and others.

What's your favorite aspect on the app/project?

There's a mystery to the project that's really energizing. Our subconscious mind (our "shadow," as Jung called it), is really underexplored, but we're convinced there's something really huge hidden within it. It's just a hunch. Like Columbus setting off for the new world, we're diving in not knowing exactly what we'll find. But we have the same deep conviction that what's there is worth exploring. That boundless potential is what continues to drive us through many a sleepless, dreamless night. 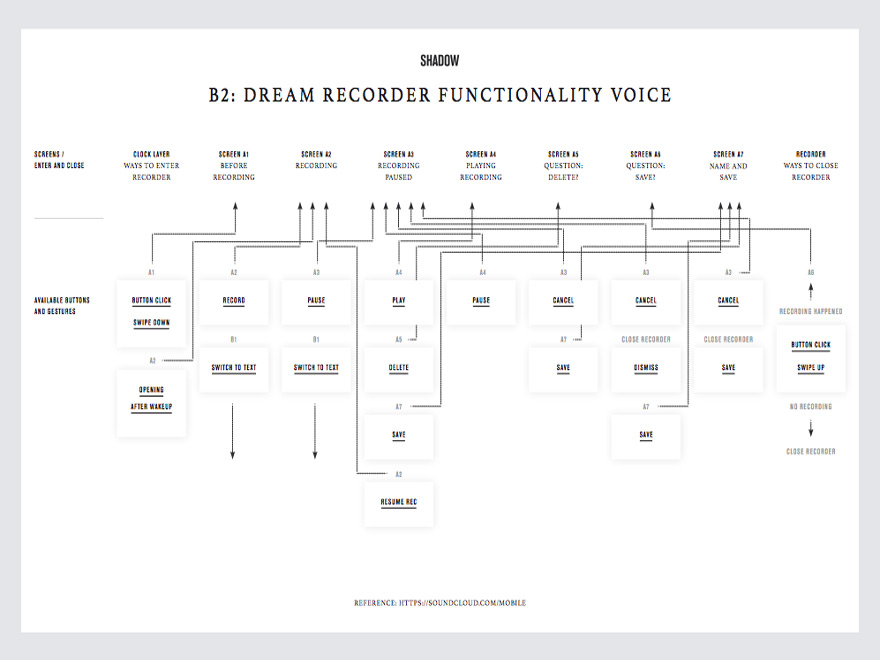 How does the app detect patterns in dreams?

By making the data social. The process on the backend is fairly complicated, but on a basic level, SHADOW takes the keywords and demographic data you input and turns dreams into data points. Then it pushes that data into a giant global dream data cloud. This way, individual users can track their own dream themes and patterns over time, and then they can sort through and visualize an endless stream of data from dreamers all over the world. 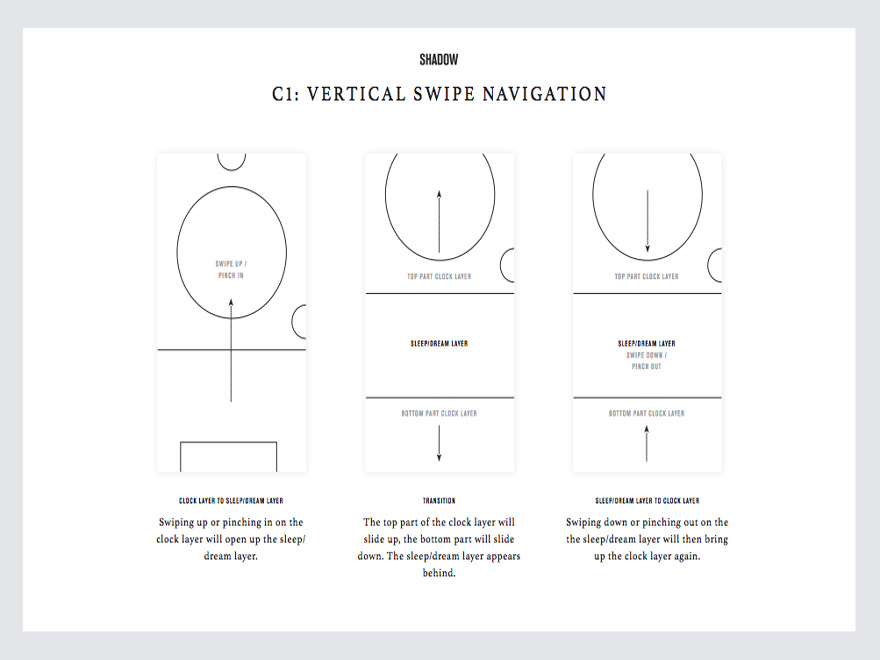 The plan behind SHADOW's swipe navigation

Why is recording dreams and recognizing patterns beneficial, in your opinion?

Because when we remove the barriers of reality, when our mind can really wander, we start to push the boundaries of our own potential. Over that last few centuries, our culture has advanced at such a rapid rate that we've accelerated some really wicked problems, problems like climate change and income disparity that seem insurmountable. But our technology has also advanced, and we've never been more prepared to tackle them. To do it, though, we'll need to come together and dream big. That's where SHADOW can help. There's a reason we call our biggest, most bombastic goals "dreams." It's because our dreams are where this magic happens. We problem solve in dreams, we process our experiences, we make long term memories, and we come up with crazy ideas. We really believe that recognizing this potential and being bold enough to harness it is key to our future.

Can you share any anecdotes or behind-the-scenes situations from creating the app.

When I was working on the Watch the Throne tour, we really needed a designer. So I searched online and found a portfolio site for this guy Raf based in Berlin. I loved his stuff, so I called him up and he actually answered. We really hit it off, and I told him about the project. But I never told him who it was for, I just asked him if he could be in Atlanta in a few days. He agreed and I sent him a plane ticket. When he arrived and saw we were doing rehearsals for a Jay-Z/Kanye tour, and he was pretty floored. We've been collaborating ever since; we both tackle UX and he focuses on UI and engineering. We've had a lot of those little moments of serendipity, and that impulse to take a risk for a big idea is what this company is all about.

Check out the Kickstarter campaign and contribute here.