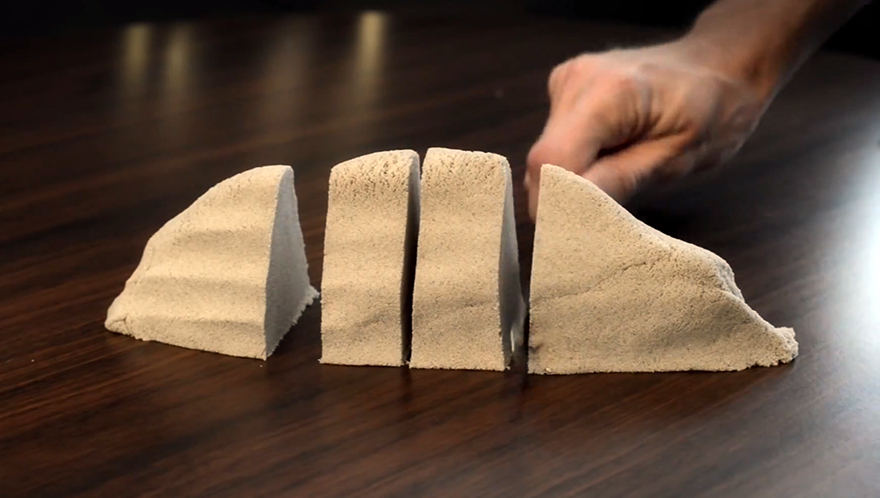 Denmark may have the lockdown on Lego, but a neighboring country is also producing something children can use to build things: Sand. No ordinary sand, of course. A company called Delta of Sweden, which manufactures modeling compounds for use in the educational, medical, therapeutic and arts & crafts markets, has an invention called Deltasand. The stuff has been licensed by several toymakers, most notably Colorado-based WABA Fun, who have produced this video demonstrating the product (rebranded "Kinetic Sand"):

What ingredient could the manufacturers have possibly added to make the sand behave that way? You probably noticed the video mentions the product is 98% sand, but neglects to tell you what the rest of it is—leading one cynical YouTube commenter to respond with "98% pure sand, 2% deadly chemical compounds."

We did a little digging into Delta of Sweden's product-specific medical fact sheet (the document you bring to the doctor after you notice all of the sand has disappeared and Billy's belly looks full). While the proportions are not revealed, there are only two ingredients listed: "silicon dioxid" [sic] and "polydimethyl siloxane."

Silicon dioxide, which is what we assume they meant, is basically sand and presumably the 98% part.

Polydimethyl siloxane or PDMS, on the other hand, is a rubbery, viscoelastic material that's a key ingredient in Silly Putty.

So is it safe? It better be: PDMS, a silicone agent found in caulk, can also be used as an antifoaming agent—something that both McDonald's and Wendy's list in their ingredients for Chicken McNuggets and french fries!