This is a true story. Descriptions of companies, clients, schools, projects and designers may be altered and anonymized to protect the innocent.

Editor: Where we last left off, Design Ninja had practically killed himself to generate 100 concept drawings, in an effort to impress the design consultancy where he'd been hired. Now it's time for the client presentation. Will they be wowed?

I felt both relieved and worried, standing there at the baggage carousel, watching my giant plastic bins come tumbling down the slide. Relieved that the airline hadn't lost them, and worried that the drawings might be damaged. I wanted to take the tape off of the bins and check them right then and there, but my boss said we didn't have time; our flight had been slightly delayed and this was one of those in-and-out meetings. 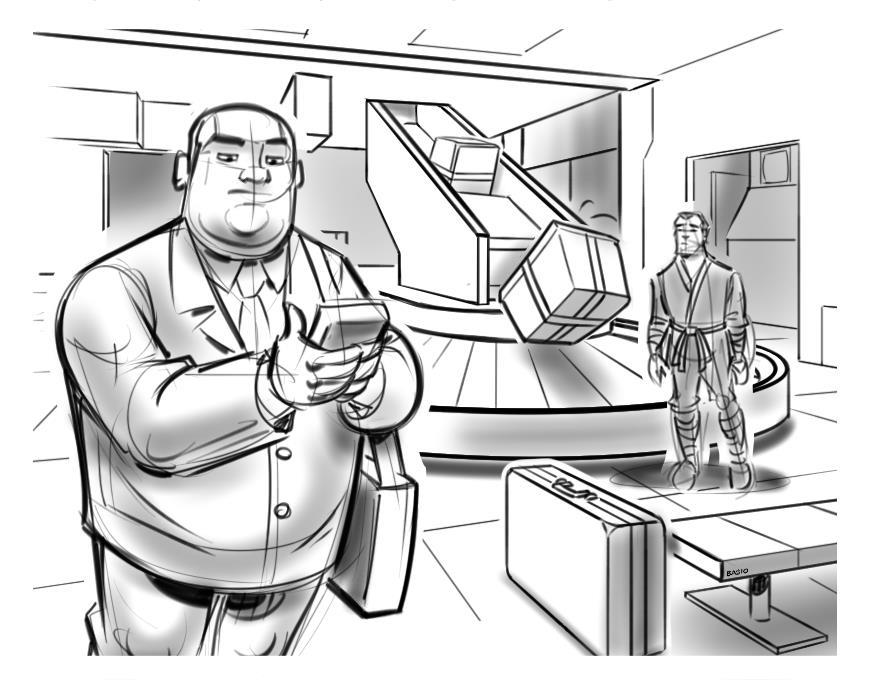 Before I knew it we were in a minivan taxi on the way to Ninja Throwing Stars LTD's headquarters.Although the company owned their headquarters building, it wasn't that impressive; all of the furniture was Mad Men style, but this was before Mad Men was popular, and everything looked more run-down than Mid-Century Modern. Judging by the surroundings it seemed like our client's heyday had been decades ago. But that, I suppose, is exactly why they hired us, to revitalize their product. I suddenly had this somewhat naive, grandiose thought that this company's salvation came out of my pen and was mounted to one of the boards sitting in the plastic bins as we took them up in the elevator.

We were shown into a large, empty conference room with a long rectangular table. One wall was covered in that grey linen-like fabric that you can stick pins into. I looked into the little bucket of pins and said "We're going to need a lot more pins!" a little too enthusiastically to the receptionist. I also asked her for a boxcutter, and after removing all the packaging tape and carefully unboxing each bubble-wrap-filled bin, I saw with relief that drawing after drawing had made it intact. I had packed them well and all 100 were in good shape. 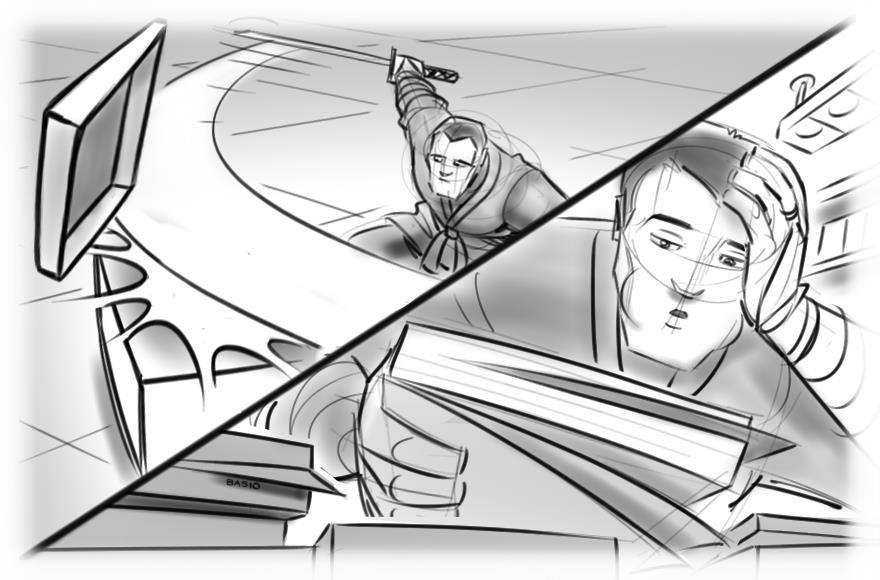 I broke the drawings up into stacks and put them all on the floor, leaning against the wall, so I could be sure they'd all fit on the wall. As I got my configuration right and began tacking them up, my boss would finally see what I'd been working on and I could brief him on the different areas I'd explored.

Or maybe not. "I'll be right back, [Design Ninja]," said my boss, who had been distractedly Blackberrying. He got up and left the room. 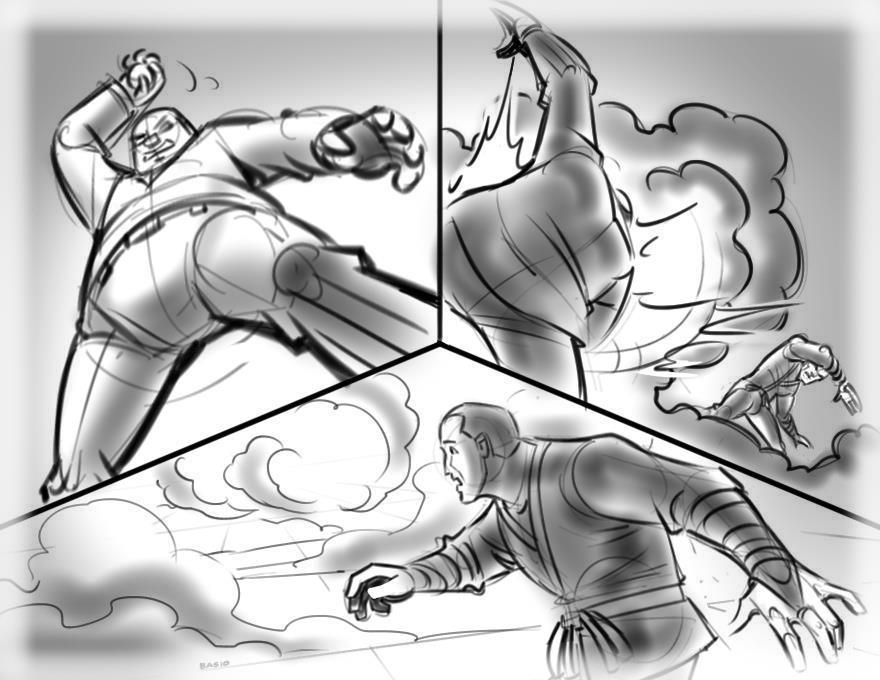 By the time I had all the drawings up, the door opened almost on cue, and I expected to see my boss walking back in. Instead a pile, and I mean a pile, of older executive-type guys walked in, all in suits, all pretty serious-looking. They all gave me that curt, forced smile-nod thing and headed for their seats, and that's when I knew I was in trouble. I'd seen that look before a lot of times at my old corporate gig; it's the face you make to the moderator when they force you to take sensitivity training, where you don't want to be there, feel like this is a waste of your time, but are being forced to go.

My boss came in last, finally tucking his Blackberry away in a pocket. He introduced me to everyone, not individually, but with me standing up there like I was being debuted at a society ball. One by one, like it was rehearsed, they started at one end and went around the table announcing their name and department, i.e. "Mike Flynn, Sales" "Roger Goodman, Engineering," etc. All of them were in their fifties or older, except for one young guy, I'll call him Jimmy, about my age who said he was from the engineering group. There was at least a dozen of them, and I noticed that Jimmy was the only one who was actually looking at my drawings up on the wall.

One seat in the middle of the table was empty, but not for long. In strode a short, fat, but powerful looking man with a bad comb-over who came and took the seat like a king. He looked like the kind of guy who smoked cigars. "Sorry to keep you waiting, boys," he said. (He didn't look sorry.) My boss introduced him as the President of the Company, said a few words about how he thought our concepts were really going to knock their socks off, then gestured for me to begin presenting. 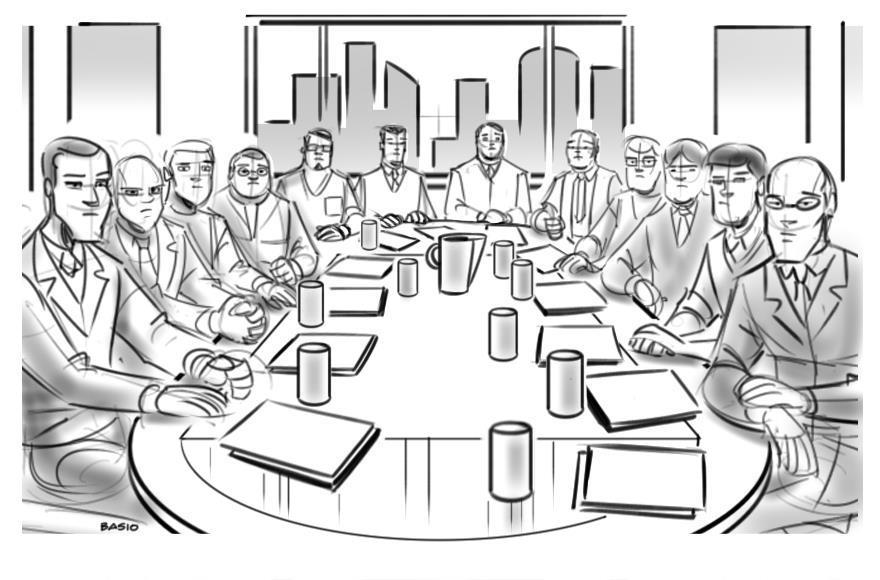 I swallowed hard, walked over to the first row of drawings on the groups' left, and started talking. I had them all grouped according to concept theme, and my sweat pores started opening up as I began describing them. "...so as you can see, these retro-themed concepts really leverage the company's aesthetic history..." "...for a more modern feel, we've got this family of concepts over here..." "...these concepts clearly demonstrate the technological prowess consumers prize..."

I was less than halfway through it when Short, Fat Boss Man suddenly raised a hand. I thought that he had a question, then realized that the gesture meant he wanted me to stop talking. He looked over at my boss, then looked back at me. I will never forget the next words to come out of his mouth: "Do we have to talk about these?" he said. "Because I don't see anything up there that I like."

I froze. My butt muscles clenched up and I literally froze, and was speechless. I was staring at a point on the table in front of Short Fat Boss Man and wanted to look over at my own boss, to see what I should do, or if he was going to jump in, but I couldn't move my head. A dead silence settled over the room.

Suddenly Jimmy, the younger guy, jumped to his feet and came around the table. "Well, there's some interesting stuff here," he said, moving towards my drawings and doing that thing where you cross your arms but use one hand to hold your chin, as if you've suddenly been given food for thought. "[Short Fat Boss Man], look at this one here, this is kind of like what you were talking about a few months ago. And then we've got this one here, Roger's always saying we can't fit [technical component] on the back of our existing model, but this kind of shape would give us the room to..."

I didn't even know this kid Jimmy, and he totally saved my ass. He went from one side of the wall to the other, calling out specific features of my drawings and tying it to things that the execs from different departments were interested in. None of them seemed particularly excited, but he at least got the room talking, bouncing questions across the room and prompting answers from those around the table, and getting that nasty dead air out of the room. My butt unclenched by a few millimeters and I looked over at Short Fat Boss Man. His eyes were no longer boring into me, but he was instead discussing something with the guy next to him.

I looked over at my own boss, and he raised his eyebrows and gave me a friendly Well, whaddaya gonna do? kind of shrug.

I was a little disappointed that he didn't jump in and try to "save" me, though of course I didn't show it after we walked out of the meeting. He didn't exactly give me a pep talk, but he had a little schpiel, the gist of which was "You win some, you lose some." And I learned, over the next few months at [Best Design Consultancy], that that was essentially how this place ran. The corporate experience I'd had was that all of us in the Design Group were "in it together," almost like a platoon, but my subsequent consultancy experience was that it was more like Special Forces, or a bunch of mercenaries that had a common goal but were all expected to pull their own weight.

I eventually rose to this challenge, and grew confident enough to handle it, with each successful project I executed. But I'll never forget that one first presentation, and how awful it felt to be standing up there. Thankfully I have never experienced a presentation like that again.

Oh, and you might be wondering what happened with Ninja Throwing Stars LTD. Believe it or not we actually got to the foam model stage with them, almost 18 months later, before they pulled the plug. By then I'd thankfully proven my worth to Best Design by executing well on some other projects, so there wasn't any blowback, and it was roundly agreed that that particular client was never going to modernize anyway. So this ninja's job was safe. 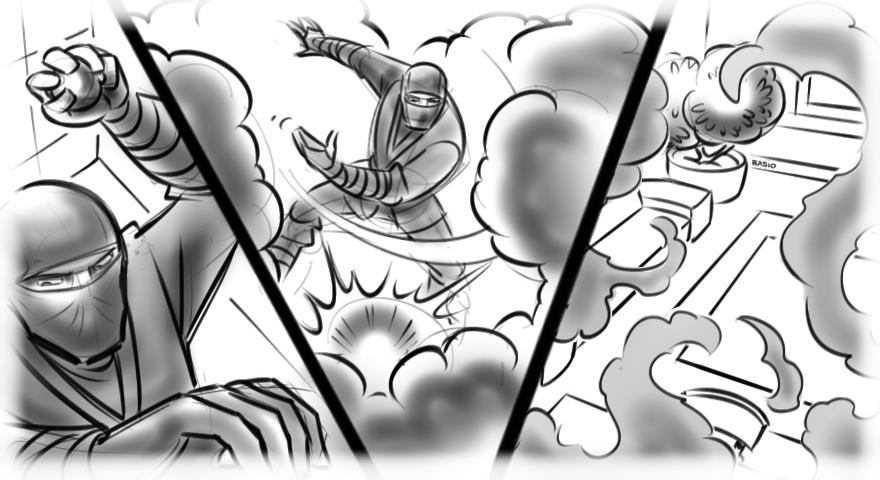