Brendan Ravenhill on Switching From Boat Building to Industrial Design, Working in Los Angeles, and How a Bottle Opener Jump-Started His Business 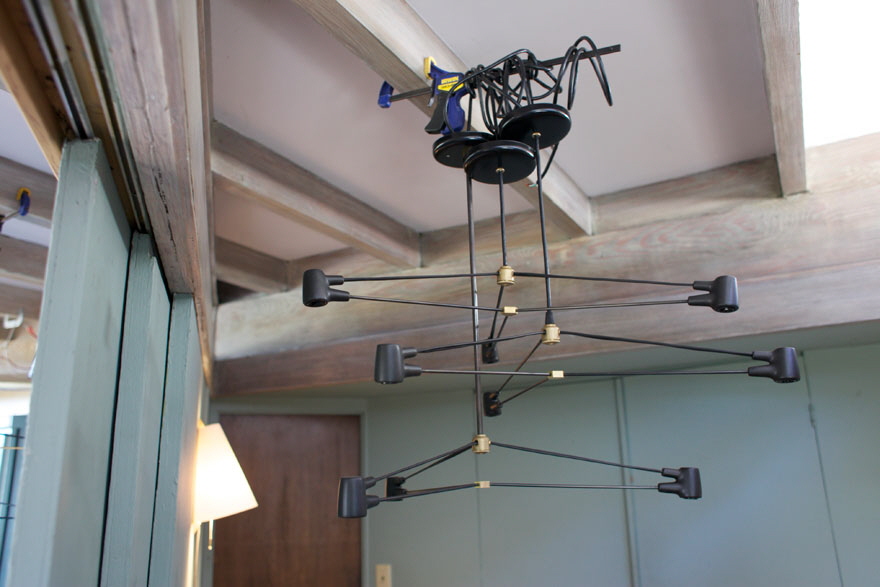 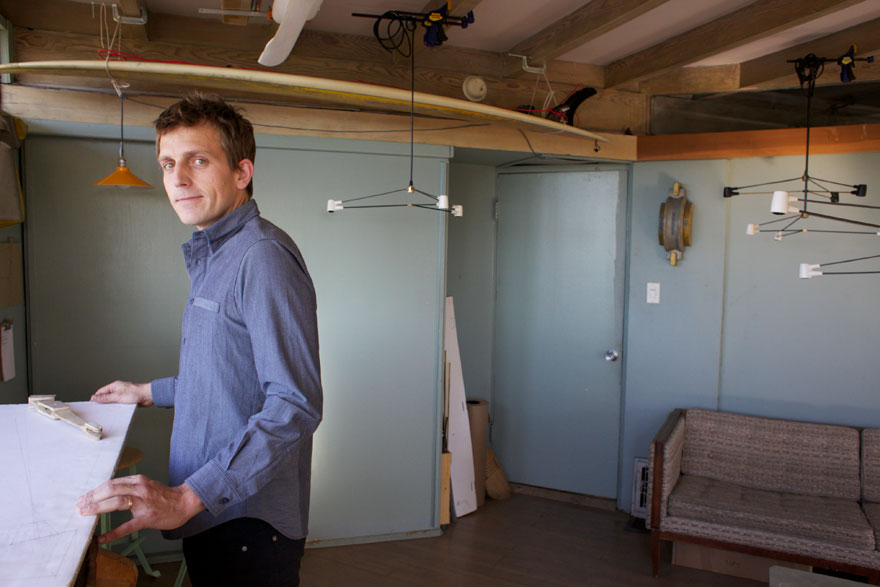 Occupation: I'm a designer—everything from products to furniture to lighting to interiors.

Current projects: We self-produce four distinct lighting families that vary in range from sconces to chandeliers, and from elegant to practical. We're developing a new family of lights for winter 2014, in response to a number of inquiries we've gotten for even more dramatic fixtures that are designed to be adjustable. We hope to preview the line this fall.

We're also currently designing barstools, tables, banquettes and chairs for several restaurant projects, and developing a new cast bronze bracket that can be used in a number of different configurations. The bracket grew out of a meeting with a talented metal caster here in L.A. When we find a local manufacturer to work with, it often starts a whole creative process of figuring out what we can make using that individual's particular manufacturing skill and capability.

Mission: What really motivates our work is how material properties and manufacturing methods can drive a design and an aesthetic. We try to celebrate that and bring that out in the work, rather than trying to hide it. So I'd say my mission is to create objects that have a kind of inherent truth to them, that speak about all the various parts that create the whole. 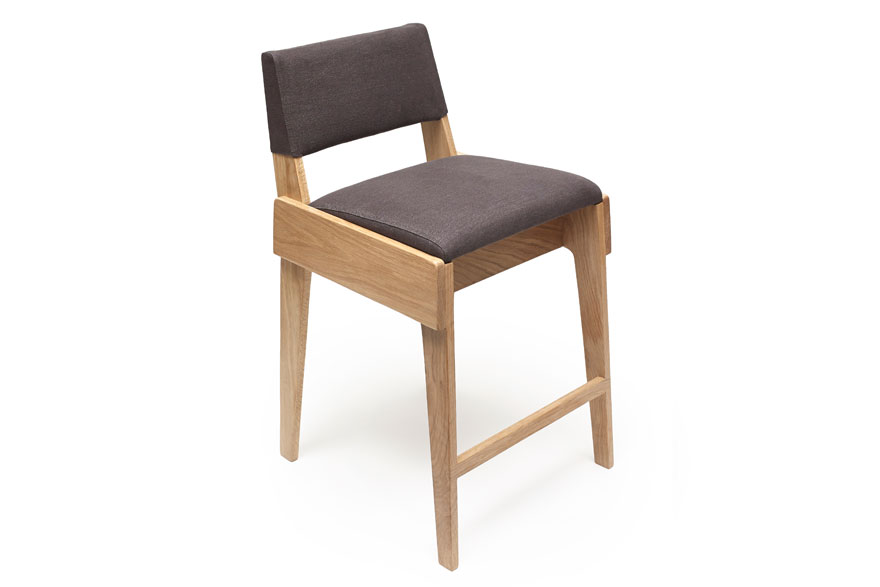 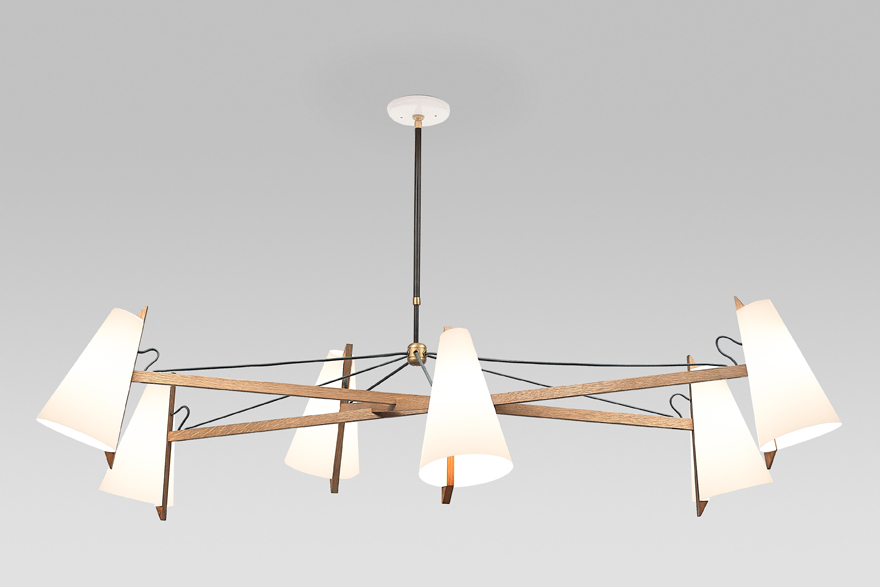 When did you decide that you wanted to be a designer? I have an undergrad degree in sculpture, and for years I was a wooden boat builder. I went back to grad school for design because I loved building things but I was really attracted to the idea of being able to mass-produce objects and furniture. So I went to grad school in 2007 with the idea of being a designer, and I started my own company soon after graduating in 2009.

Education: I went to the Rhode Island School of Design for a master's in industrial design.

First design job: While I was in grad school, I designed a bottle opener that got licensed by Areaware. The bottle opener was one of my thesis objects—my thesis at RISD was about investigating objects that, through wear and use, develop a patina and increase in value. The bottle opener was a simple object that I created to investigate some of those material properties. I made eight and gave them out to friends, and one made its way to Areaware and they picked it up for licensing. That was my first "licensed object" job.

Then when I moved out to L.A. in 2010, I got a job to design a restaurant, because the owner had seen my bottle opener in a magazine. That's what jump-started my business—some of my earliest work that I'm now still producing came out of that project.

Who is your design hero? I have a lot of design heroes, but someone who I really look up to his Nathaniel Herreshoff. He was a wooden boat builder who not only had amazing mastery of form, in making really beautiful and fast boats, but he also had his own manufacturing capabilities in Rhode Island, where he constantly pushed materials and methodologies in boat building. So as much as he was an innovator in new forms, he was also an innovator in how to create those forms. He was an early and huge influence on my design career. 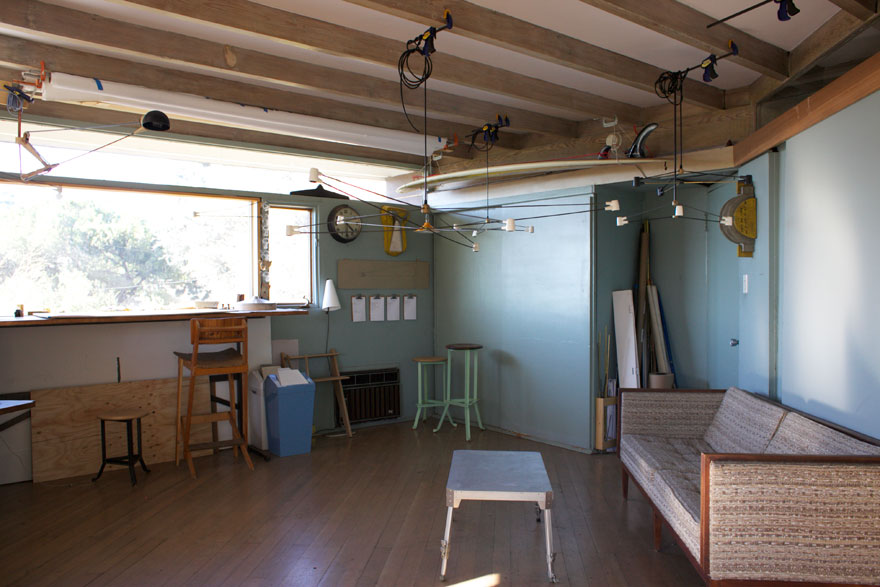 Inside Ravenhill's studio in his Los Angeles home 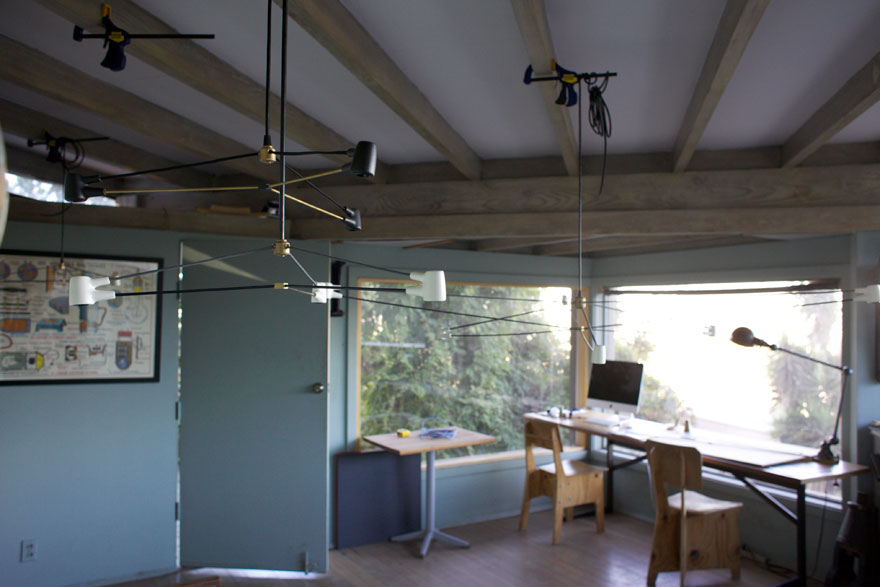 Describe your workspace: I work from home, so we work out of a midcentury modern house in the hills of Los Angeles. Being in L.A., we do a lot of our work outside; we run most of our power tools outside. We also have a little prototyping shop set up in our basement. And then we have a wing of the house that we've converted into a studio for me and my employees. It's probably a couple hundred square feet, with great views of L.A.

Other than the computer, what is your most important tool? I would say pen and paper . . . or the band saw. My process is very hands-on, so I'm more likely to draw something full-size and make rough prototypes out of pine and foam before I would get to the computer stage.

What is the best part of your job? Creating new things. Bringing something to life that's never existed before—it's the ultimate satisfaction. That first time that you sit in the chair that you designed and spent countless hours refining every little detail, it's a pretty amazing feeling.

What is the worst part of your job? Bookkeeping. I never realized how much of my time would be spent on bookkeeping and e-mailing and doing all the paperwork that goes into the backend. You know, I consider myself lucky if I spend a couple hours a day designing. That's what I work for, but more often than not it's a lot of paperwork and correspondence, and that's the part I don't necessarily love. 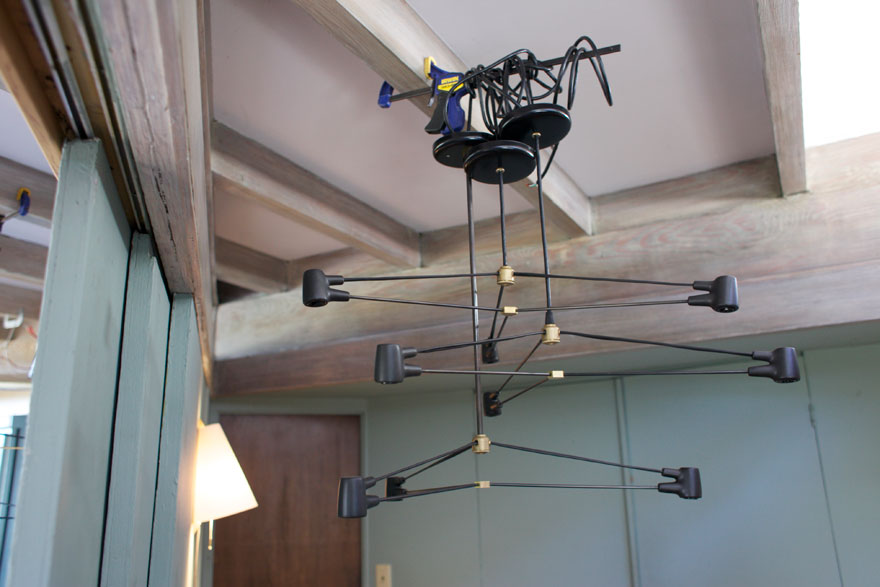 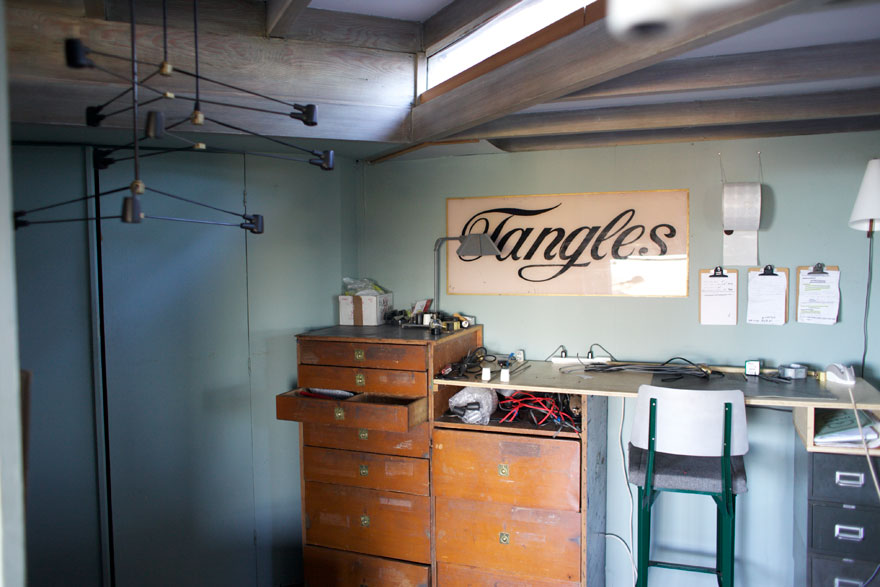 What time do you get up and go to bed? I get up around 6:30 in the morning and go to bed by around midnight. My wife—who works from our studio—works East Coast hours, so we start work at our house around 7:00 or 7:30 every day.

What is your favorite productivity tip or trick? I guess the biggest thing is just to never stop. If you get stuck on something, recognize that you're stuck and keep moving. Just move on to something else. I'm constantly giving myself a long to-do list, and whenever I'm at a point where I don't want to do something on that list, I look at the next thing and just move forward.

What is the most important quality in a designer? Execution. Having ideas isn't the hardest part. The hardest part is actually to be able to execute and push through those ideas.

What is the most widespread misunderstanding about design or designers? Well, for designers, I guess it would be how much time is actually spent designing. I thought that I would spend 30 to 40 hours a week doing design, and I'm lucky if I spend 10 hours a week. It's rare that I have time to come up with new ideas. 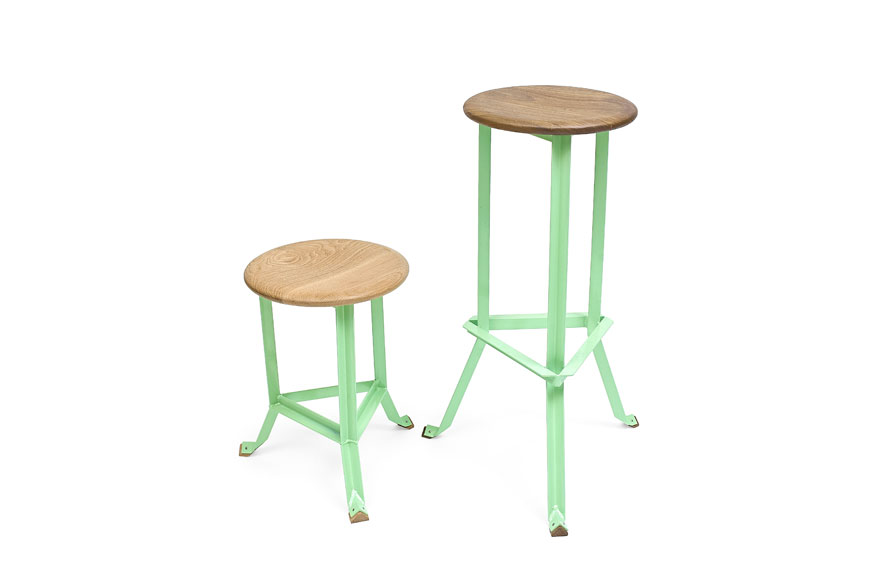 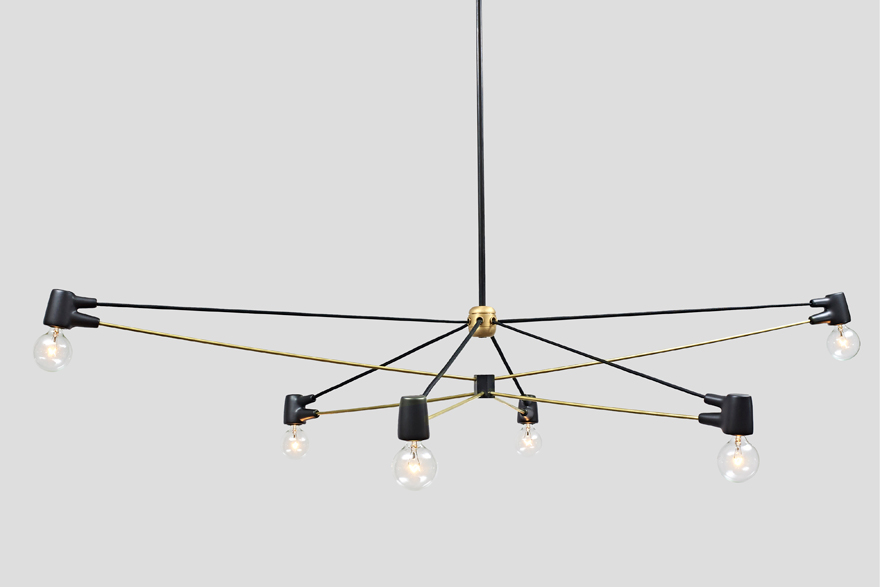 What is your most prized design possession? I have a Jielde lamp that I love. It's a midcentury French design. I got it at a flea market years ago. It's on my desk, and it's just a great piece of industrial design.

What is exciting you in design right now? The ability of the Internet to create new channels of distribution. I wouldn't be in business if it wasn't for this ability to set up my own e-commerce site and have this direct relationship with the consumer. I think the opportunity now for local self-production is really made possible because the Internet is this great democratizer. And it allows for a whole new crop of objects that wouldn't have been able to come to life 10 years ago.

If you could redesign anything, what would you choose? I would love to redesign the Bic lighter. Something that's so perfect, affordable and ubiquitous. I would love the chance to take on a project like that.

What do you hope to be doing in 10 years? I hope to have more furniture being licensed by some of the bigger European and American furniture and lighting producers, while also continuing to have my small studio practice of self-produced work. I'm really attracted to this idea of building a studio that does both of those things.

Lastly, who's more fun to have a drink with: architects, industrial designers or graphic designers? I have friends among all three. I wouldn't necessarily be able to pick. I will say, though, that architects are the easiest to make fun of.

Brendan Ravenhill on Switching From Boat Building to Industrial Design, Working in Los Angeles, and How a Bottle Opener Jump-Started His Business