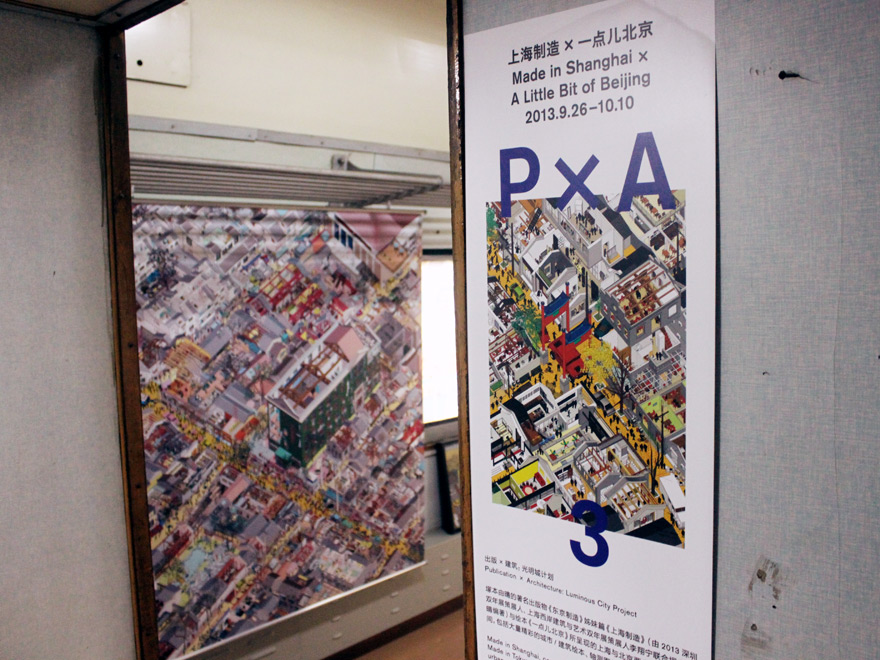 I'd regretted breezing through the NY Art Book Fair this year—I braved the crowds on Saturday afternoon, and the hour I'd allotted myself was not nearly enough time to filter the sheer visual (and yes, tactile) onslaught of printed matter. But a souvenir from Beijing Design Week more than made up for it, and for all the limited editions, handmade zines and other rarities available at MoMA PS1, nary a booth would have had a copy of A Little Bit of Beijing. In fact, I haven't been able to find any information about Li Han and Hu Yan's three-volume graphic novel anywhere online: The book is published by the Luminous City imprint of Tongji University Press—luminous-city.com was offline as of press time—while the website of Drawing Architecture Studio (Li and Hu's practice) is currently "Under Construction." 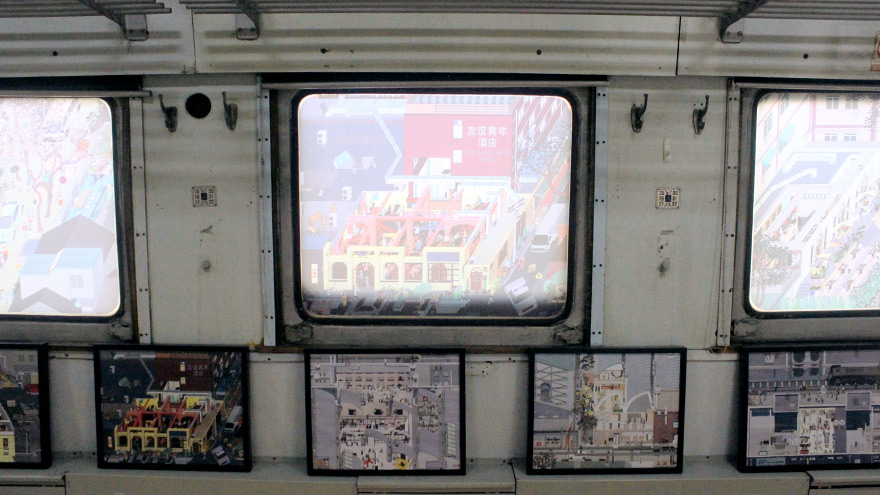 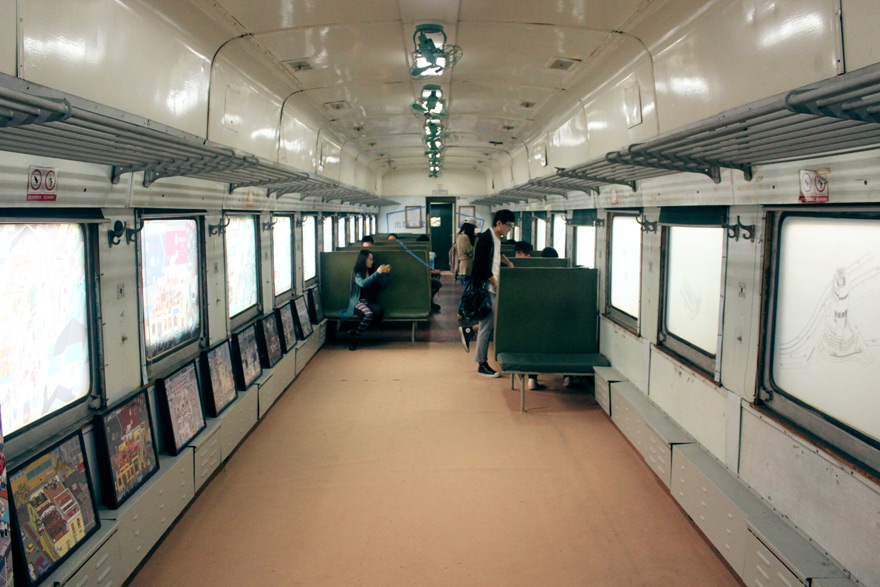 So it was a happy coincidence to discover A Little Bit of Beijing at 751 D.Park, in an appropriately charming venue to boot: Luminous City had set up shop in a passenger train that had been converted into a gallery. (To further compound the confusion, the expository text also credits architects Li Xiangning and Atelier Bow-Wow's Yoshiharu Tsukamoto, who are behind Made in Shanghai and its progenitor Made in Tokyo respectively.) Along with framed prints along the walls, translucent reproductions of the artwork had been set in the windows of the train to striking effect; even magnified several times over, it's quite clear that the vibrant line drawings are painstakingly detailed. 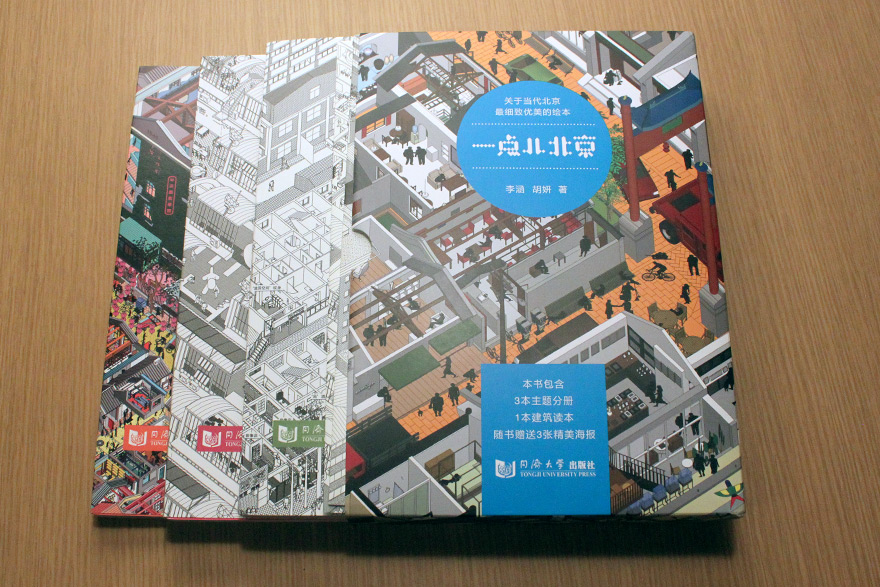 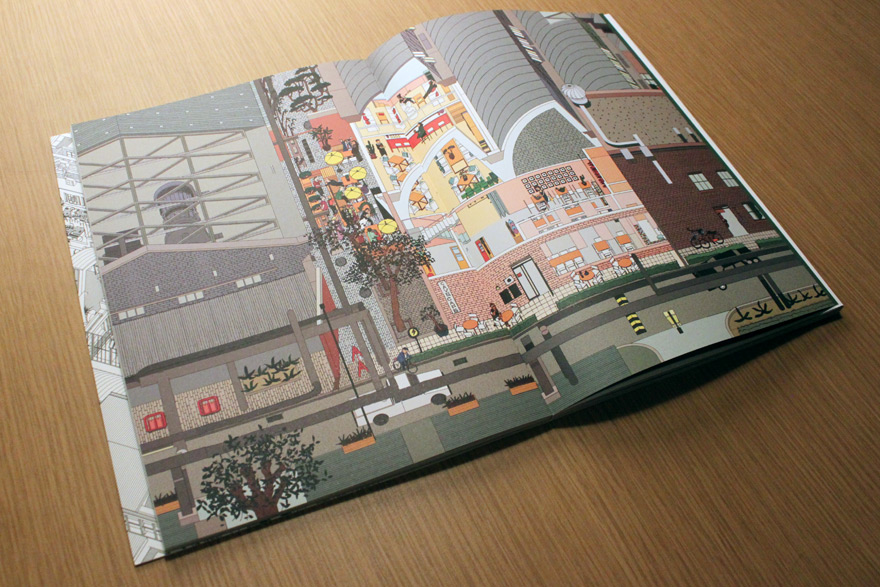 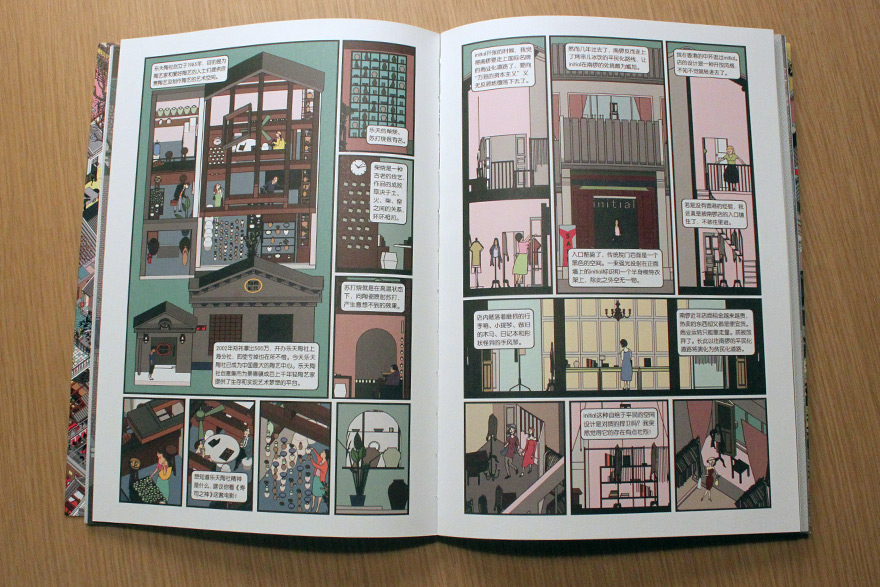 Chris Ware's signature style is the obvious reference point, and indeed the artists acknowledge a debt to Ware, as well as Jean-Jacques Sempé, as source of inspiration. I gleaned as much from the introductory text to A Little Bit of Beijing, but I'm not too proud to admit that my reading ability is far too limited to attempt proper perusal of the book. (Limited though my vocabulary may be, I do know that the third character of the title, 儿 [er], is an untranslatable reference to Beijing's local dialect.) Thankfully, the illustrations effectively speak for themselves, and their richness transcends language, even in the case of the conventional comic-book panels that depict short vignettes. 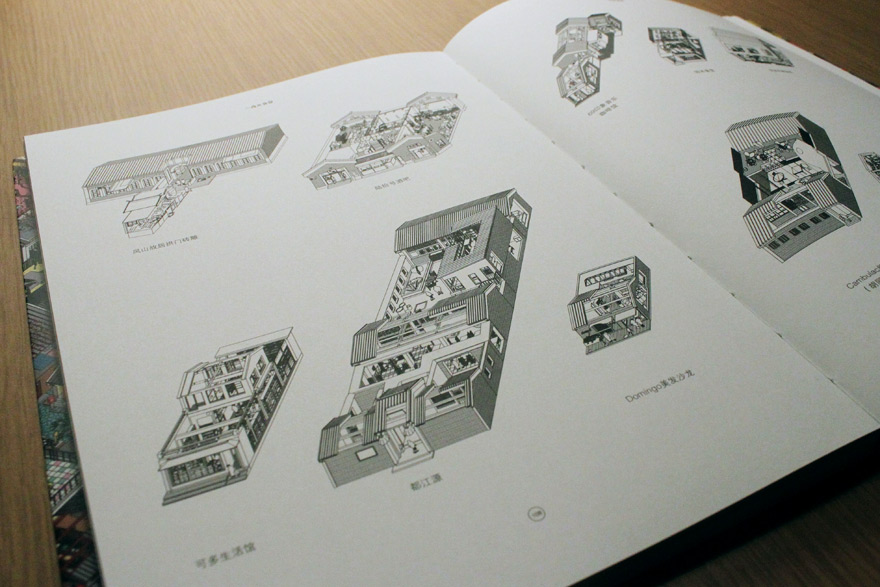 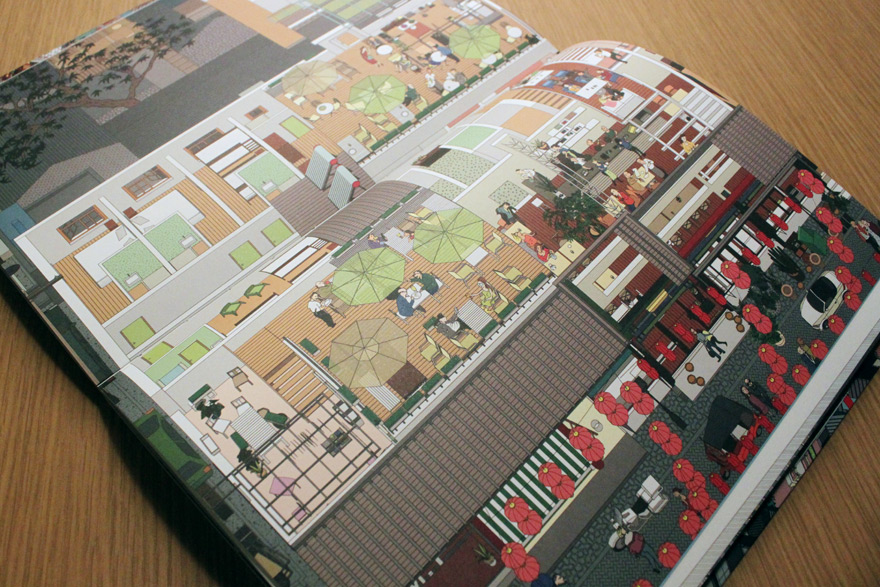 Architects among you might be able to identify the technique behind the vector drawings: Hu related that the majority of each image—the 'fixed' elements—is composed in none other than Google Sketchup, which affords an axonometric perspective that is at once naïve and democratic for its idealized flatness. The artist subsequently adds color and figures in Photoshop, and this layer of humanity—computer-generated though it may be—somehow makes all the difference. (Ware, for the record, executes his drawings by hand.) 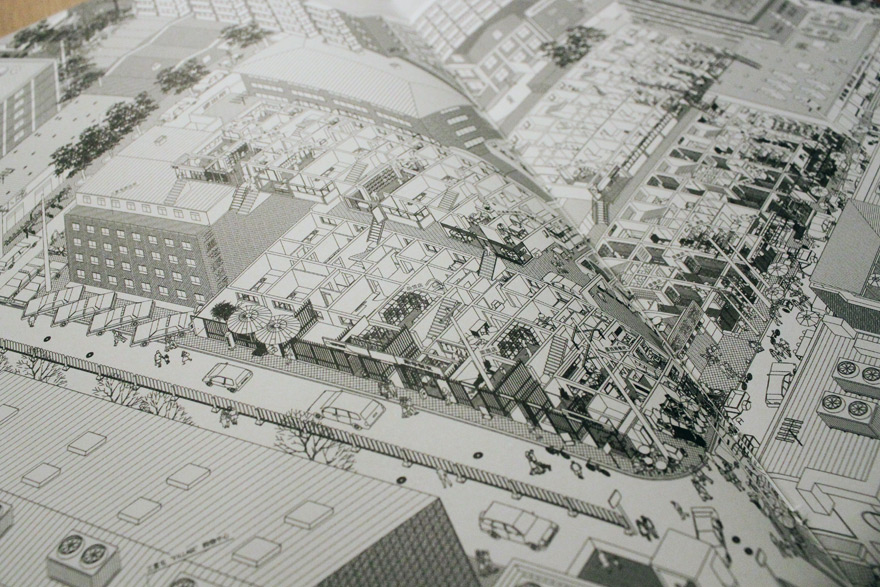 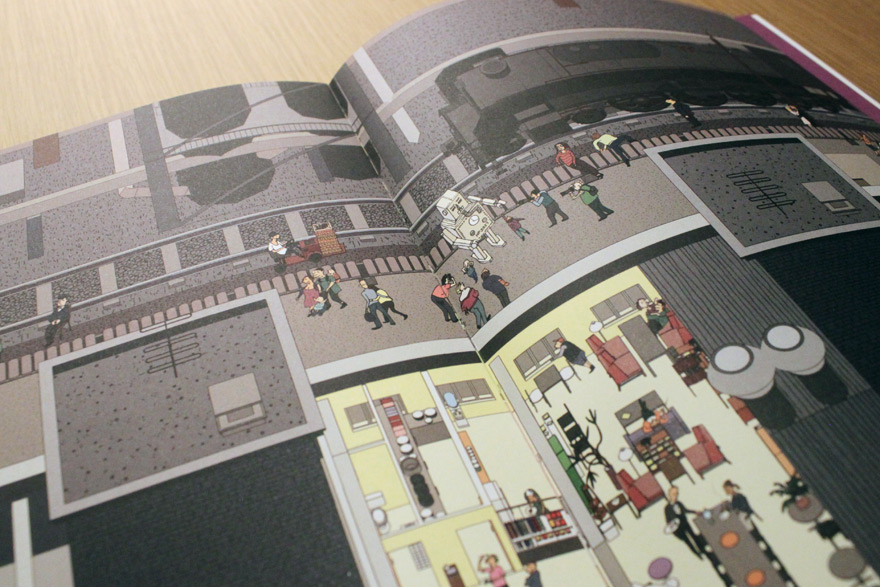 Some of the images read like the most beautiful tourist map you've ever seen; others are patchwork arrays of rooftops and aerial cutaways; there are also appendices of traditional sections and orthogonal projections. The crisp lines of the buildings inevitably conjure Bauhaus, but the undulating rooftops, brick lanes and dappled surfaces serve as textural elements to break up any strict adherence to geometric rules. 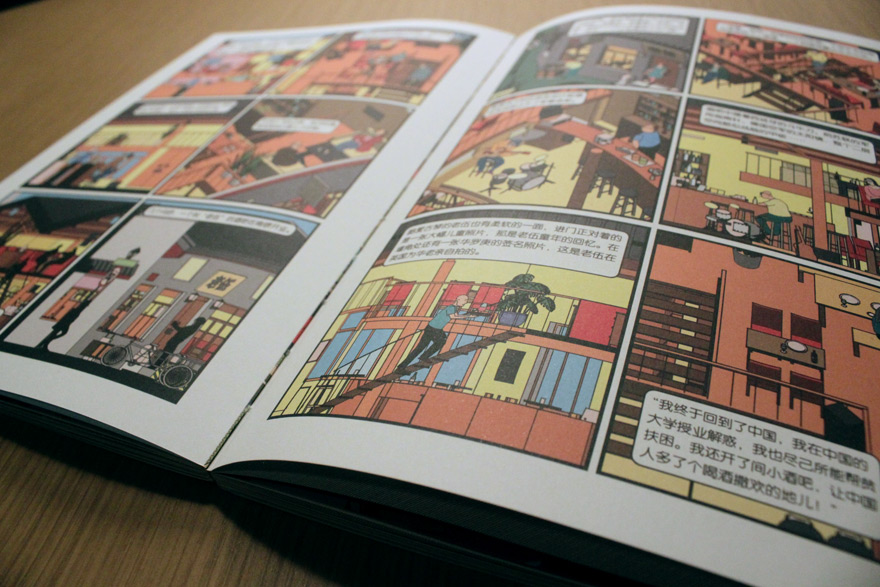 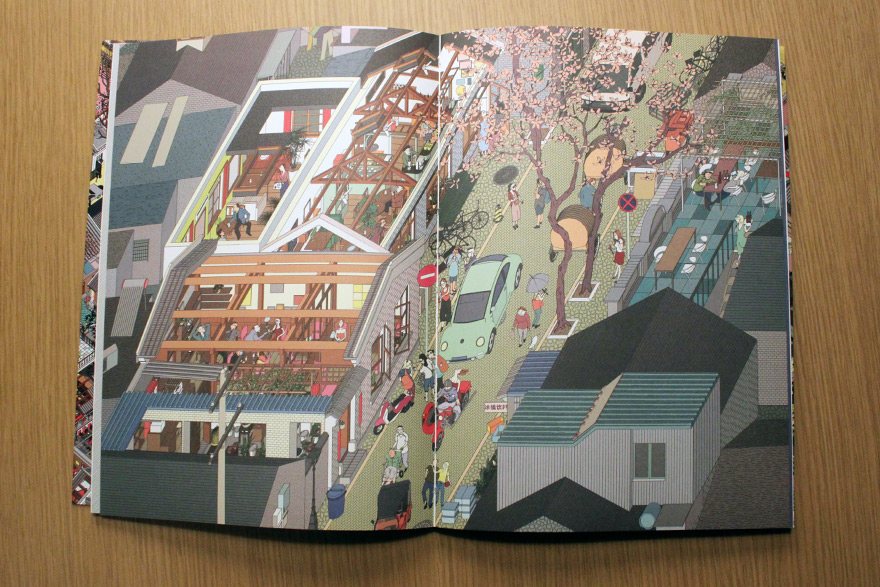 Rather, A Little Bit of Beijing adheres to a less obvious rule: That these are real places, inhabited by real people, in real time. This is perhaps the most remarkable thing about the graphic novels—that both the topography and the denizens of these tiny worlds are based on firsthand research, observation and source photography that Li and Hu gathered from each of the three neighborhoods (one per volume) of Nanluoguxiang, Sanlitun and 798 Arts District. The publication and accompanying exhibition, then, are visual odes to these places as special corners of the city. 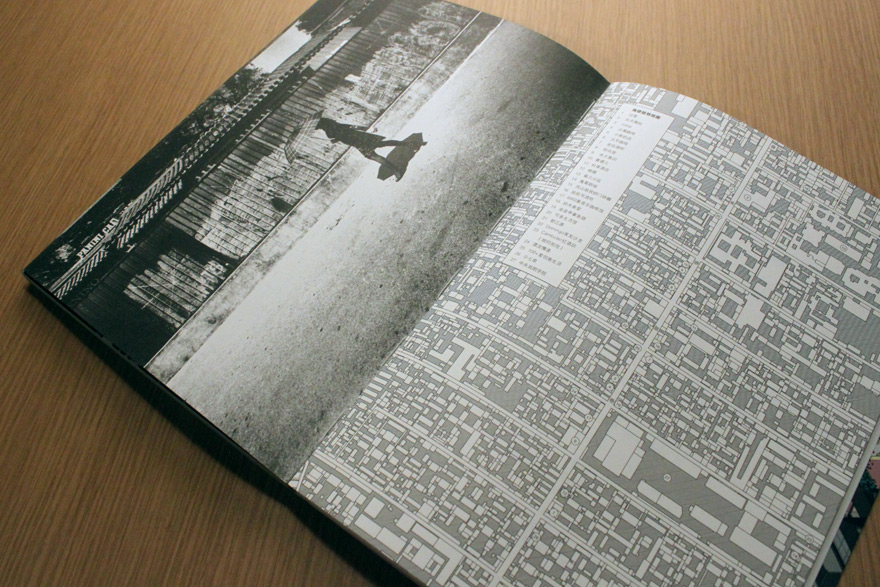 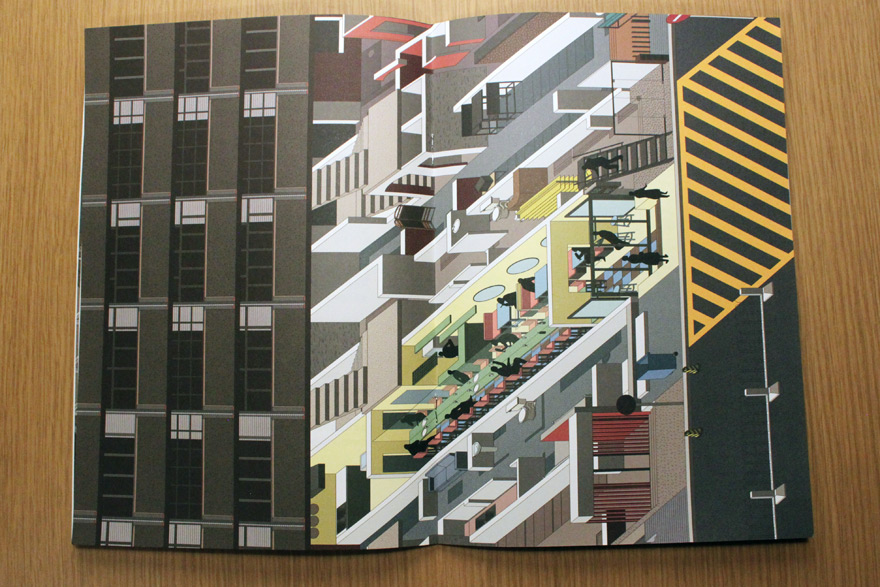 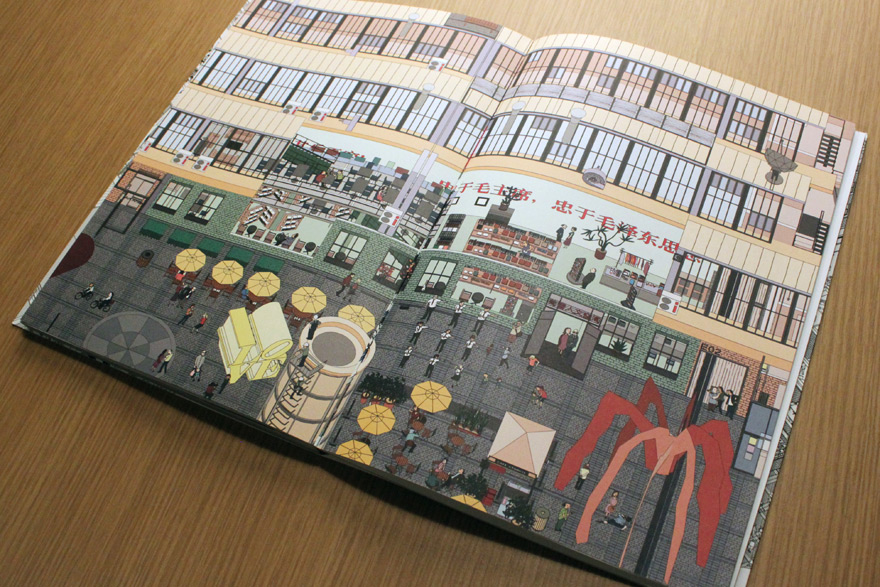 I imagine that the text explores the topic greater length, but the short version is that each of these areas has seen rapid commercialization in the past decade, albeit in different ways, and A Little Bit of Beijing serves as a historical document in the sense that it captures and catalogs each of these places at a specific moment in time. The question, then, is whether the superficial semblance between the depiction of the three neighborhoods, is intended to reflect reality—that gentrification leads to homogeneity—or critique it.

Either way, it's quite beautiful. 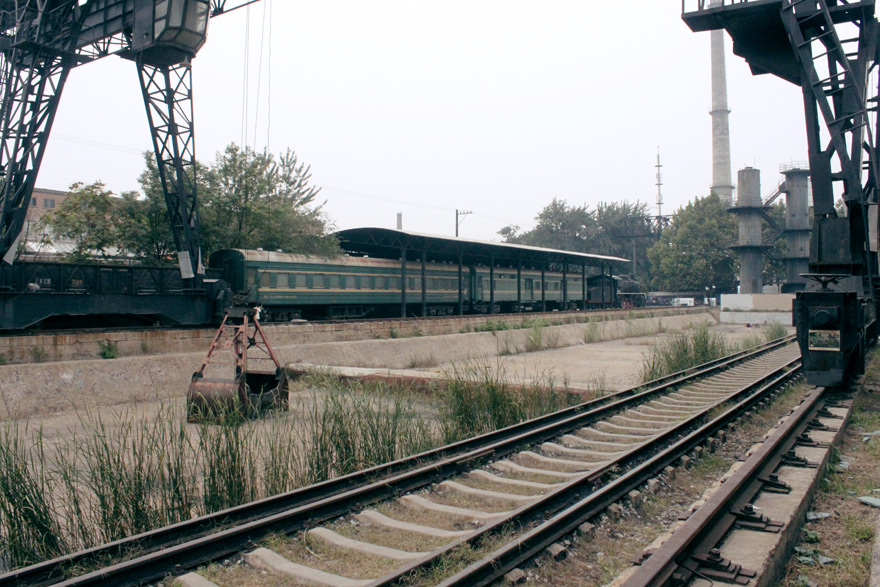 Exterior view of the train 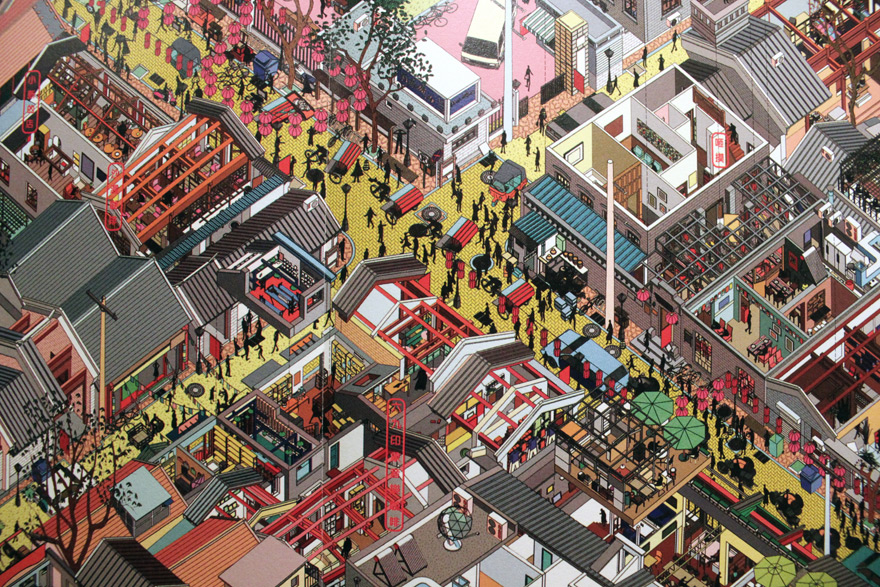