How Much Would You Pay for a One-of-a-Kind Desk... Designed by Jony Ive & Marc Newson for Bono's (RED) Charity Auction? 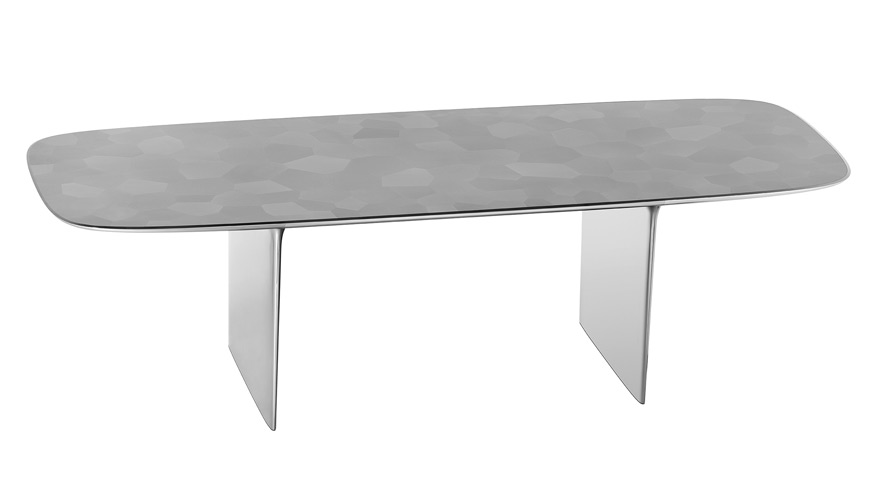 There's still no release date set for the new Mac Pro (it's still "coming later this year" as of press time), but Jony Ive fans will have a chance to bid on his latest project on November 23, when Sotheby's holds it's second (RED) charity auction, featuring a selection of design objects selected and customized by Apple's design lead and Marc Newson. And while their ultra-clean take on the Leica M has been making rounds for the last two days or so, the desk is the only brand-new, never-before-seen design in the auction.

When it came to designing a completely new object specifically for this auction, Jony and Marc knew they wanted to work in aluminum, a material that has long fascinated them. Their creation is a monolithic desk with an aerodynamic form machined from solid pieces of aluminum. It was produced by Neal Feay Studio in Santa Barbara, and the firm's principal considers The (RED) Desk to be a "historic piece with no precedent." The edge of the desk is extremely thin, almost blade-like, but perhaps the most entrancing aspect of the desk is its surface, with a unique cellular pattern that the designers liken to a jigsaw puzzle, with 185 pieces that seem to fit together. With its sublime combination of scale, detail, and refinement—and an innovative manufacturing process that made it possible—this desk is a perfect exemplar of the ideals embodied in Jony and Marc's curation of the (RED) Auction. This unique piece is inscribed to mark the occasion: Designed by Jony Ive & Marc Newson for (RED) 2013 edition 01/01. 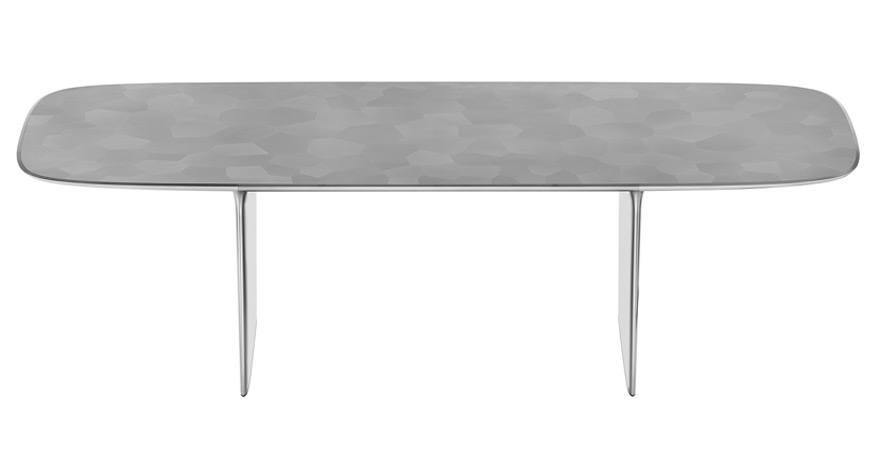 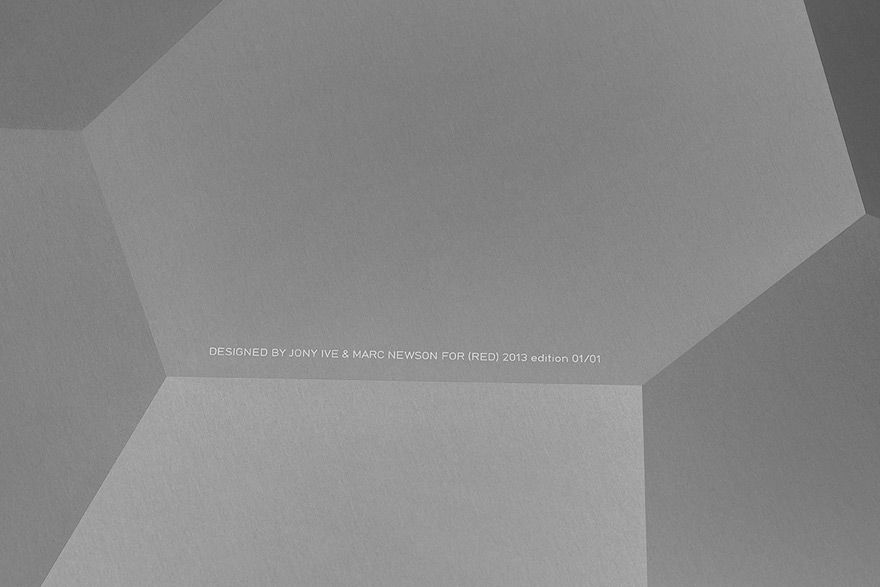 Whereas the Leica has a sticker price that will surely be eclipsed by covetous bidders, it's all but impossible to determine an estimate for the sui generis desk. I'd actually be curious as to which item fetches the highest price, as both the camera and the desk will be auctioned alongside some 40 other luxury goods, including: 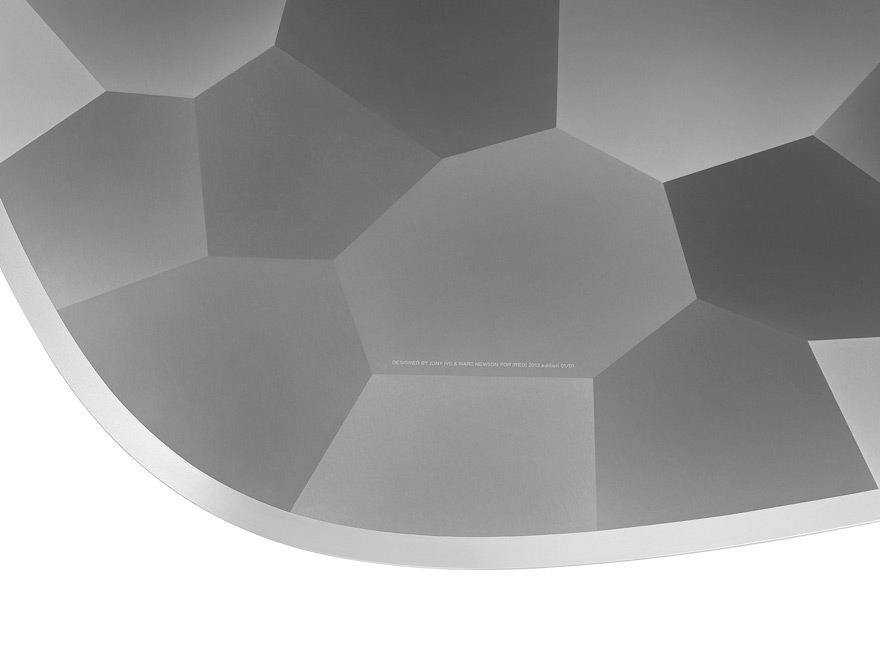 If the design itself looks a little more Newson than Ive, I must say the photography—assuming that they are indeed photos and not renderings—is very much in keeping with Apple's immaculate product photography. (Andrew Zuckerman shot all of the items for the limited-edition catalog, which will feature introductory essays by Stephen Fry and Bono, as well as commentary from the designers; it may well be the only thing that most of us could even consider buying from the auction.) I was also interested to see that the donation of the desk itself was credited to Neal Feay studio, who fabricated the piece. President Alex Rasmussen cited the company's three generations of experience as instrumental to producing a desk that "embodies the virtues of outstanding design and production in the most striking of forms." 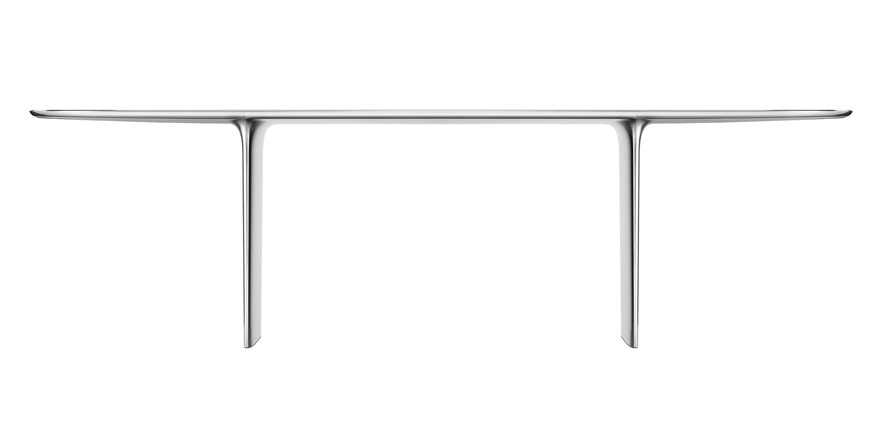 Organizer Bono worked with Damien Hirst on a similar fundraiser back in February 2008, when works by the likes of Banksy, Anish Kapoor and Marc Quinn brought in over $40m for (RED). All of the proceeds from Jony and Marc's (RED) Auction will benefit The Global Fund to fight AIDS, Tuberculosis and Malaria. The work will be on view at Sotheby's New York HQ in the Upper East Side for the week of the auction, starting on November 18. See the full details of the auction, plus images of some of the other items (and a cheesy one of Newson, Bono and Ive) on the event website.