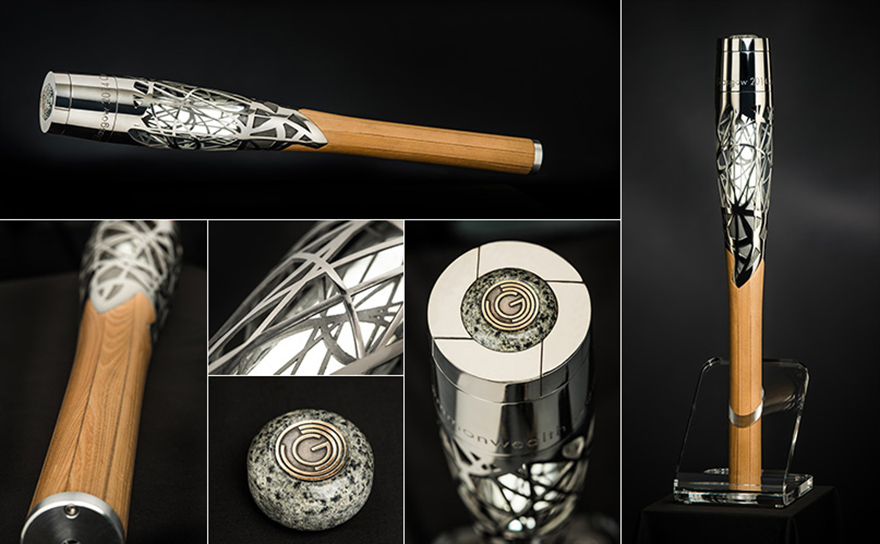 Most Americans are slightly awed by the British ability to reinvent, update and have fun with their own customs and heritage whilst staying true to the roots that give those traditions magic and meaning in the first place. This was plainly evident at Buckingham Palace last Wednesday, October 9, at the launch of the Queen's Baton Relay. The empty baton was escorted to the palace by pipers of the Scottish Guard and presented to Her Majesty, Queen Elizabeth II, by Britain's most successful track cyclist Sir Chris Hoy. As she has done every four years since 1958, the Queen placed the message she will read out at the opening ceremony of next year's Commonwealth Games in Glasgow into a custom-designed baton and sent it on a 288-day tour around the 70 nations of the Commonwealth. Both the design and fabrication of the baton tell a powerful story that embodies not just Scotland's culture but also the Scottish tradition of design and engineering excellence. 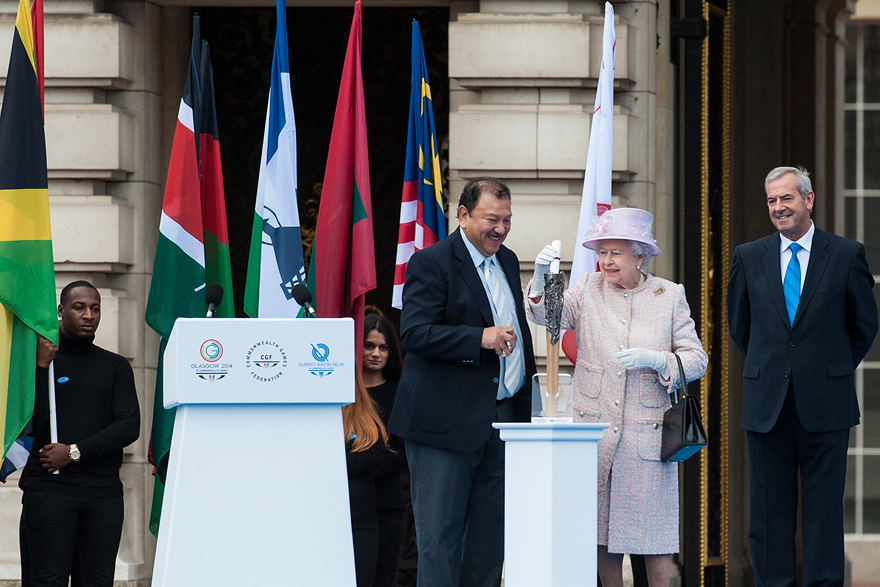 The phrase "one must learn to take the rough with the smooth" is quite popular in the UK, and no one does this better than Glaswegians... or the rest of the Scots for that matter. The aesthetic features of the baton are equally influenced by the rich tradition of Scottish pageantry (and all its associated regalia) and the natural, rough-hewn craft work found in the castles, crofts, weathered landscapes and pastimes like boating and curling found throughout the land. Furthermore, the fabrication technologies reflect the duality of Scotland's unique cultural heritage by joining the cutting-edge innovation of Direct Metal Laser Sintering (DMLS) with woodworking practices from a 1,000-year-old tradition of boat building.

Combining leading-edge technology with artisan skills, the design is literally centered on The Queen's Message and the tradition of the baton as the symbolic invitation to Commonwealth nations and territories to attend the Games. At the heart of the baton is The Queen's Message, inscribed on a sheet of parchment handmade in Glasgow using linen and plant fiber. The message will be scrolled and held in a transparent cylinder within a pure titanium latticework frame. For the first time, the message forms the visual core of the baton design—illuminated from within by LED lights, yet unreadable until the Opening Ceremony. 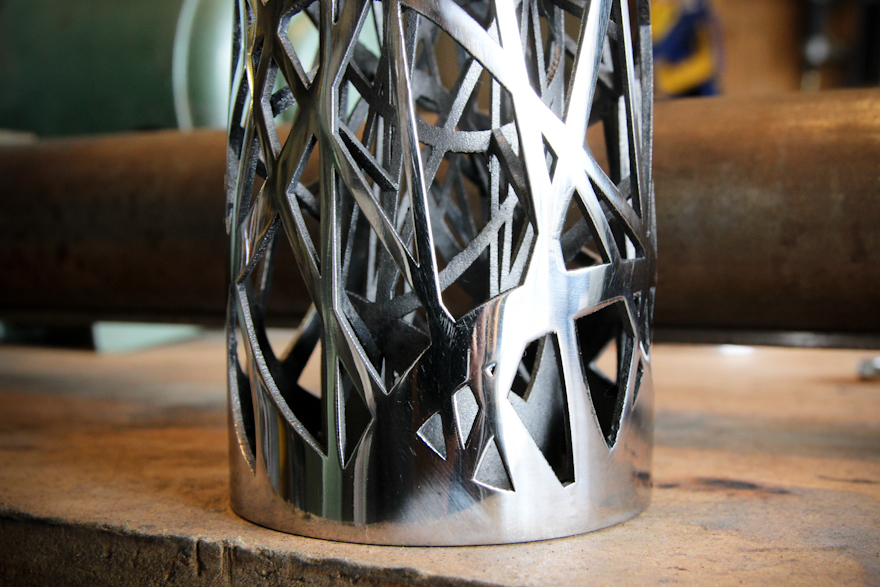 According to Will Mitchell, Design Director of 4c Design, Ltd., the studio behind the baton:

The Baton has several features to enable the Queen's Baton Relay team to monitor its overall health on the journey. The batteries have been selected to ensure that the light will run for a minimum of eight hours straight. There is also an LDR sensor on the outside to compensate for brightness.

Although the battery power is more than enough, should there be any doubt the unit has been fitted with a piece of monitoring software which can be read via Bluetooth and a phone App to show what percentage of charge is left. The App updates the team on the electronics operating temperature and will also allow the operator to turn the unit on and off, which was demonstrated at the Baton launch, when the Queen held the Baton after the message was inserted.The lattice frame takes inspiration from Glasgow's rich industrial and architectural heritage, structurally echoing both the ship building cranes on the River Clyde and the delicate filigree work of Charles Rennie MackIntosh. Designed using a combination of SolidWorks, Rhino and Grasshopper, the latticework file was then printed out by Additive Manufacturing firm 3T RPD Ltd. using state-of-the-art DMLS to fuse pure titanium powder in layers that were just 3/100ths of a millimeter thick over 30 hours. 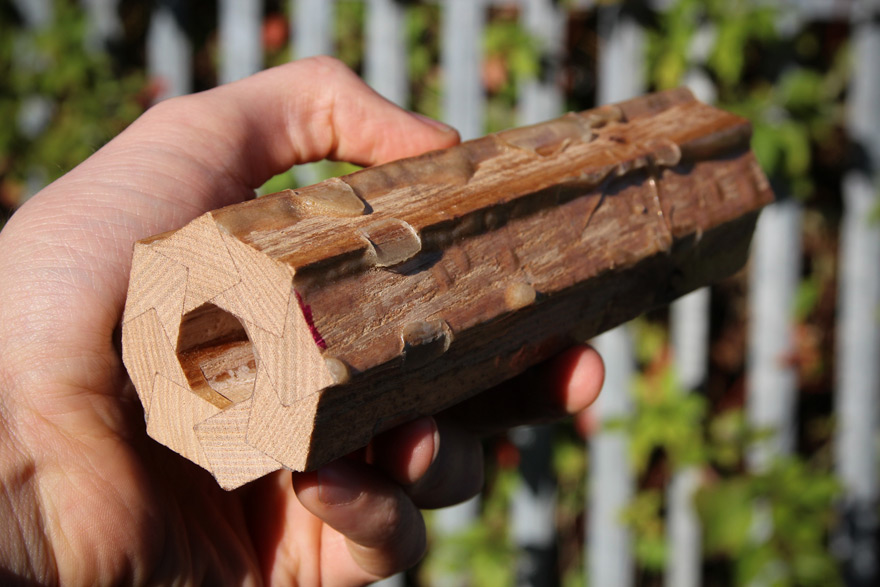 As a tribute to Scotland's natural resources, the baton's wooden handle is made of elm sourced from the grounds of Garrison House, an old Customs and Excise checkpoint station built on the Isle of Cumbrae in 1745 to curb smugglers fleeing Glasgow on the River Clyde. It was constructed using a boatbuilding technique called bird-mouthing, traditionally used to make masts for ships. Light, strong and durable, the handle was created by craftsmen at GalGael Trust, a Glaswegian social enterprise that teaches these ancient traditional handcraft skills to disadvantaged youth and those suffering from unemployment, addiction or depression. 4c Engineer Robin Smith tells us:

Unlike the Olympic torch, where there are thousands made and only the flame is passed from runner to runner, there is only one baton for the Commonwealth Games, so it has to be incredibly durable, robust and able to withstand not just a variety of climate conditions, but also a lot of handling and transporting eventualities. Working with GalGael has been incredible. There is not a computer in sight, but everything done there is just so inspirational. They've helped us create something durable, lightweight and extremely beautiful and because they are a social enterprise there are a lot of people who now have a renewed sense of engagement and pride.

In addition to Her Royal Majesty's message, the baton is also designed to hold a granite 'gemstone,' which will be gifted to each nation and territory. Housed at the very top of the baton, it is released only by opening a sophisticated puzzle mechanism. The gemstones, which look like miniature curling stones, were made of water-resistant granite unique to Scotland and sourced from Ailsa Craig, a presently uninhabited volcanic island in the Firth of Clyde. The granite gemstones were crafted by Kays of Scotland, makers of premier curling stones—including the ones used at every Winter Olympics since the Games were held at Chamonix in 1924—and embellished by jewellers from Glasgow School of Art. 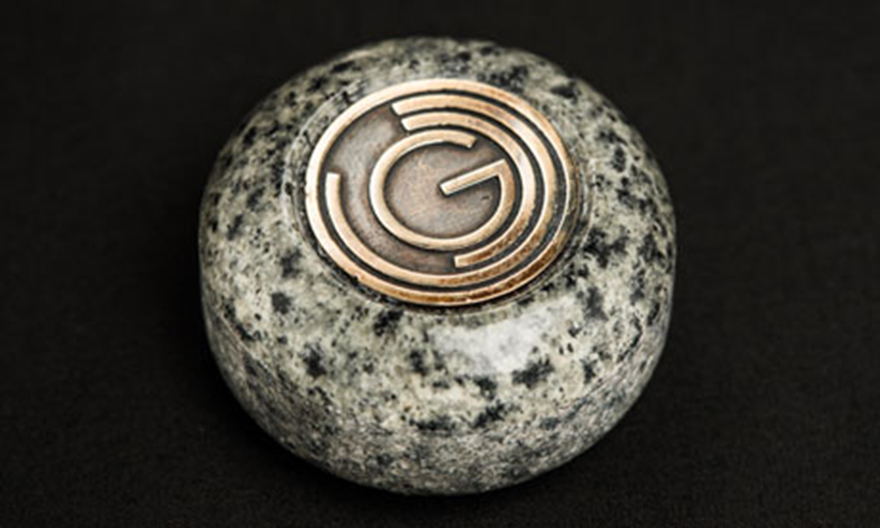 In an animated exchange First Minister of Scotland, the Right Honorable Alex Salmond waxed enthusiastically about the first time anything associated with the Queen's Baton has been left behind as a memento:

The baton is a beautiful design and it symbolizes so much of the history, the culture and the craftsmanship of Glasgow and Scotland. But one aspect in particular that is really fundamentally brilliant is the use of Ailsa Craig granite. It's one of the world's hardest and toughest granites, which dissipates heat and friction, and is resistant to fragmentation upon impact, [which is why] it's used for every proper curling stone that's ever been played. They've incorporated that into the baton so that each country and territory will have a granite gem from Ailsa Craig, which will be left as a permanent symbol of friendship between Scotland and the rest of the Commonwealth. I think that is an absolutely brilliant part of the design.

Persons in the Commonwealth Games Federation close to the Queen during the ceremony report that Her Majesty was very pleased with the design and thought it was "extremely clever." HRH Duke of Edinburgh, an avid design enthusiast who chaired the Prince Philip Designers Prize for more than 50 years, was so intrigued by the design of the new baton (so very different from the silver gilt model he had set in motion for the first such relay to Cardiff in 1958) that he lingered onstage to enquire about the intricacies of the puzzle mechanism, effectively doubling the amount of time the Royal Couple were meant to appear at the event. 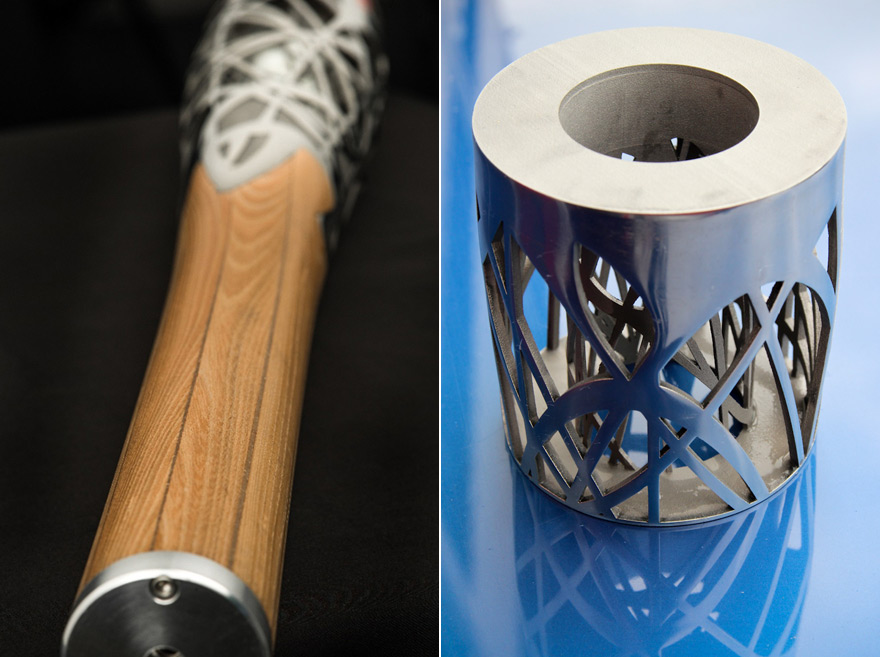 In the past, designs for the Queen's Baton have featured more frivolous components such as GPS tracking systems, webcam devices and LED lighting controlled by bio-rhythmic monitoring sensors. While these designs certainly highlight the leading technology of the times in which they were created, the have not managed to capture the spirit of the people in the host cities or countries they represented in quite the same way that the Queen's Baton for the Glasgow 2014 Games does. Once they were awarded the contract, 4c Design, who had more that 24 different stakeholders demanding input into the project, found themselves having to control the scope of the concept in order to maintain clarity. In an early presentation for the 2014 baton, they had a slide occupied by just a single phrase: "From the story comes the brief. From the brief, the design... By knowing the story you own the design." Technological achievements aside, it is because of this philosophy that 4c Design have created arguably the most beautiful baton in the history of the Commonwealth Games, a timeless classic that visually and viscerally celebrates Glasgow, Scotland, and her people.

Can't get enough Baton? Check out our photo essay on the making-of this year's baton as described here, courtesy of 4c Design. For a visual history of the Queen's Baton, check out the Commonwealth Games Federation's QBR timeline or read more about the history of the Queen's Baton Relay in Phillips Barker's blog. To follow the progress of the Glasgow 2014 baton got to the Glasgow 2014 website, follow Mark Beaumont's blog for the BBC, or subscribe to his Twitter feed here. For the latest developments with the Commonwealth Games themselves, check out the Inside the Games website.

Special thanks to 4c Design, Ltd.; check out their event recap on their blog.