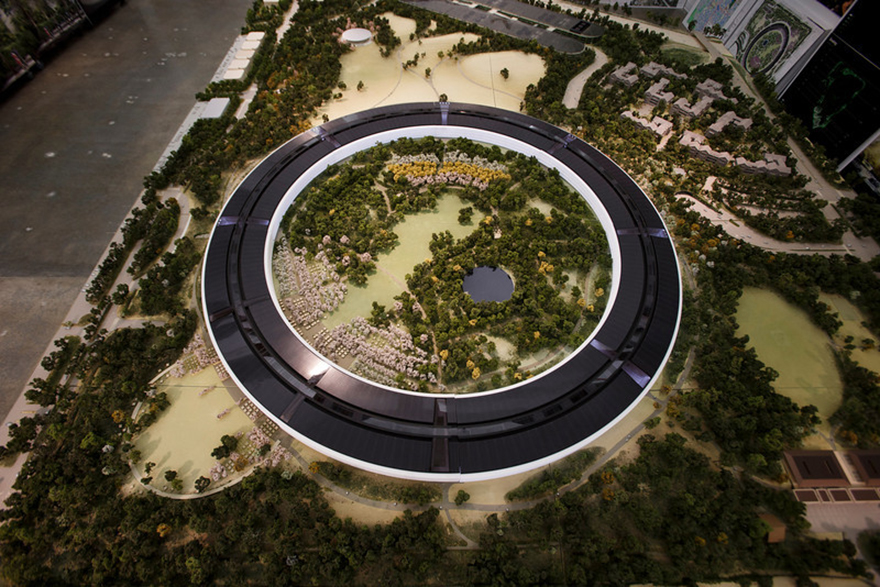 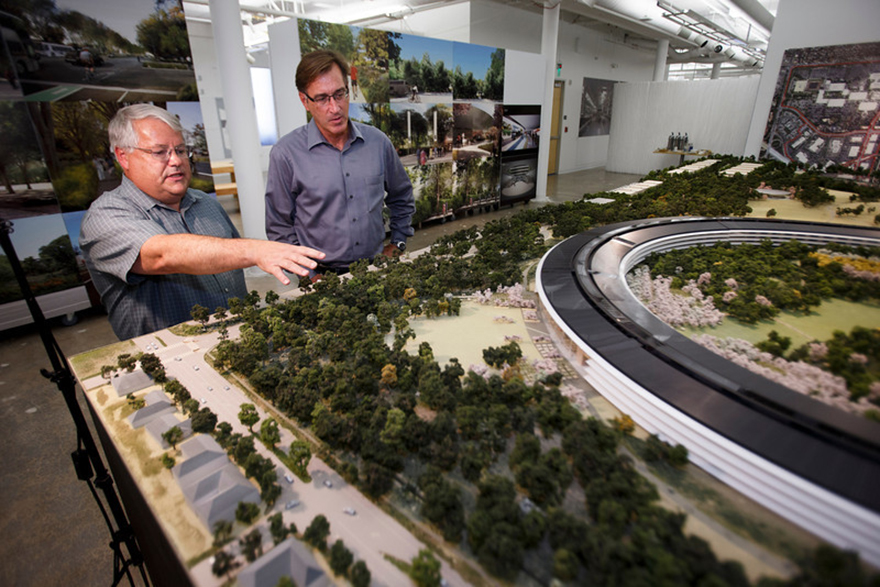 Tomorrow, the Cupertino City Council will cast their final votes on Apple's dream headquarters design, giving a thumbs-up or thumbs-down to the project. Which is why just a few days ago, Apple opened their doors to the Bay Area News Group for a rare glimpse at their in-house scale model for Apple Campus 2. 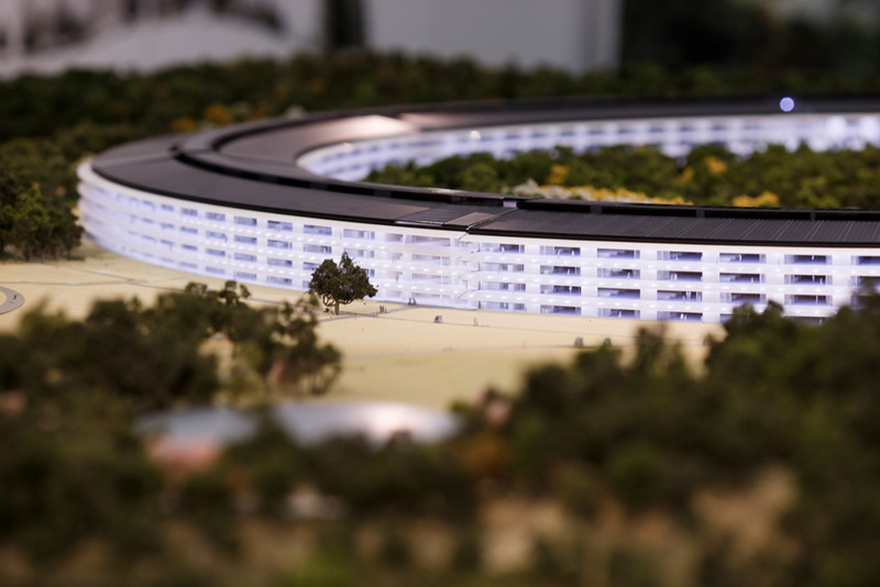 A foamcore hack job this ain't. The "top-secret, living-room sized model" depicts the much-ballyhooed circular main building and the sprawling green campus in detailed glory, and we viewers are now able to get a sense of scale that was absent in the 2D renderings. Whether you call it the Spaceship or the Apple Ring, the four-story round building is nearly one mile in circumference and close to a third of a mile in diameter. 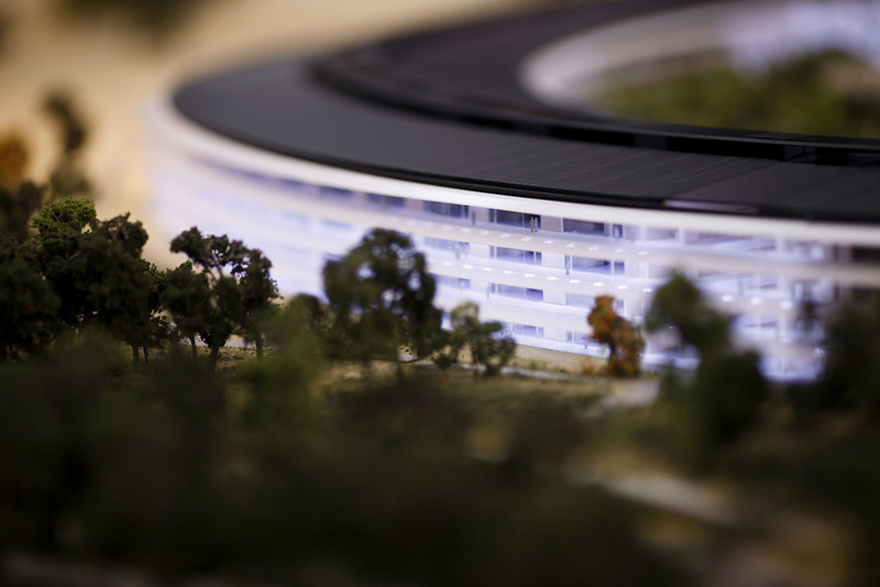 The circular shape isn't a product of whimsy, by the way. "The concept of the building is collaboration and fluidity," Apple CFO Peter Oppenheimer told the San Jose Mercury News. "We found that rectangles or squares or long buildings or buildings with more than four stories would inhibit collaboration. We wanted this to be a walkable building, and that's why we eventually settled on a circle." 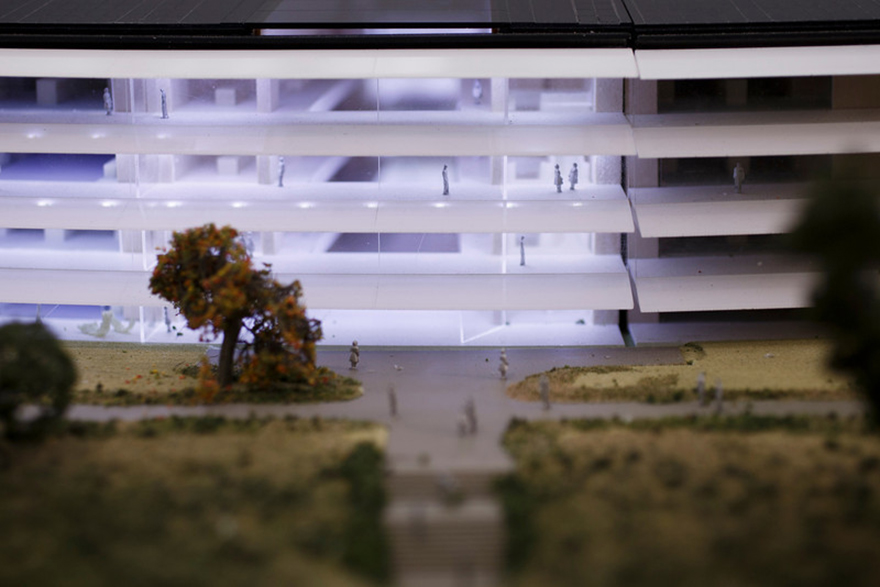 Unsurprisingly, we get no look at Ive's design lair that's presumably buried somewhere inside that circle. The largest glance we can get inside is of the atrium-style cafeteria, with ceilings tall enough that they've got trees inside. 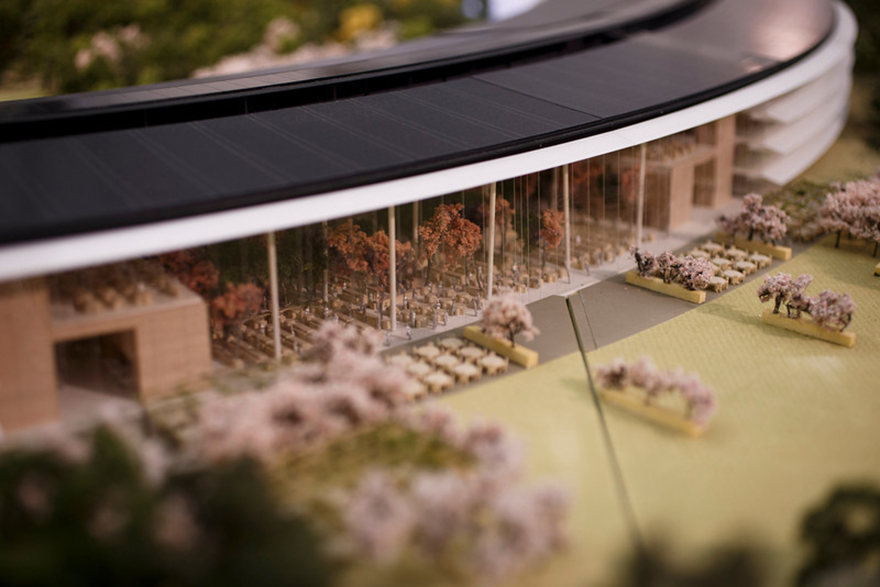 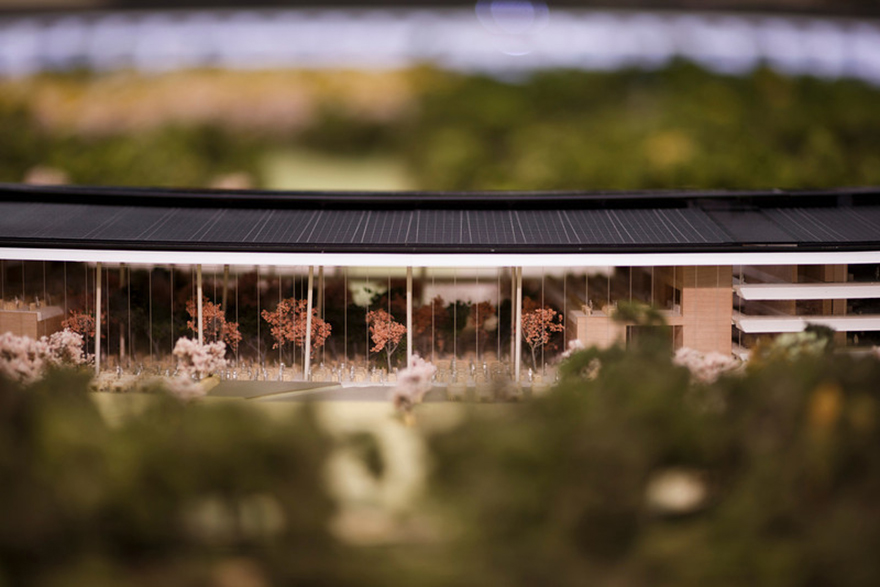 Looks like dining al fresco won't be too shabby either, especially if they actually land these cherry blossoms. 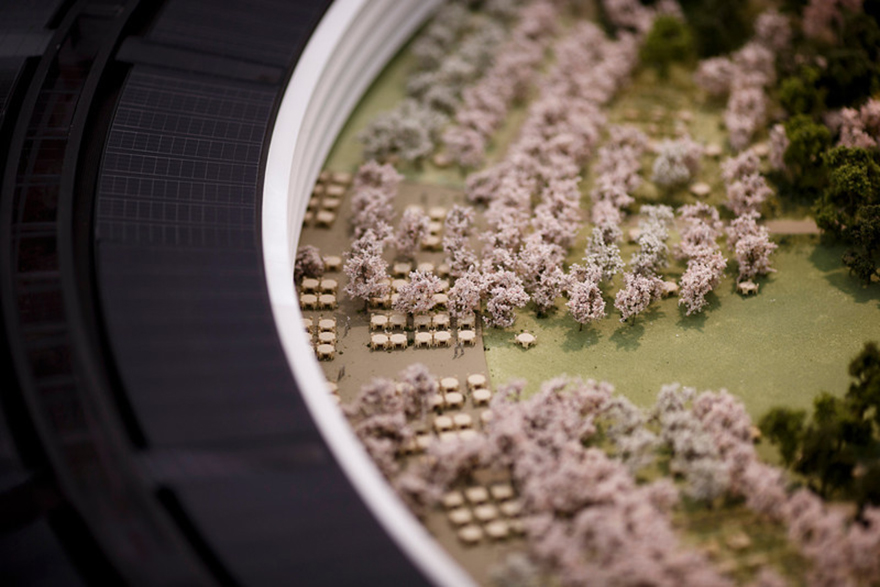 You've undoubtedly noticed the solar-panel-clad roof in the shots above. In the shots below, you can see even the parking structures and what appears to be a public roadway encompassed by the campus are also covered in green. 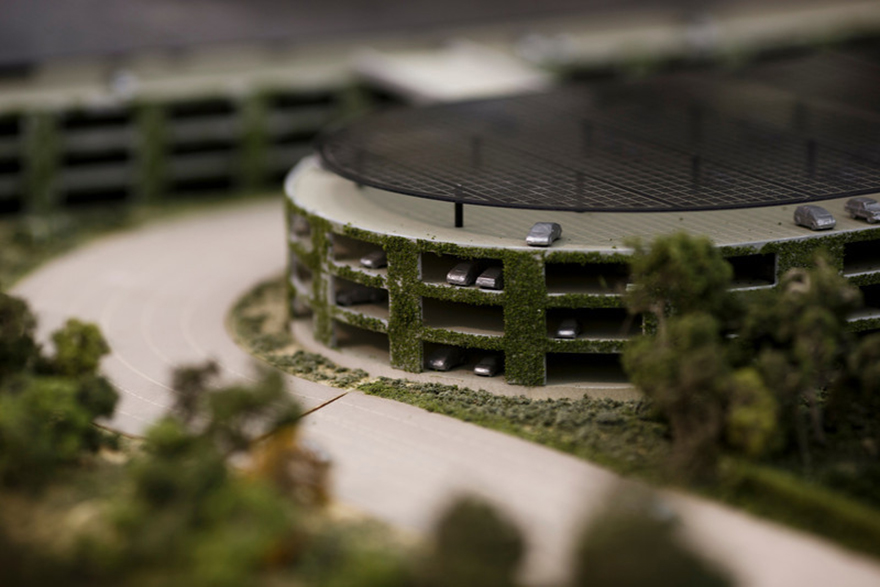 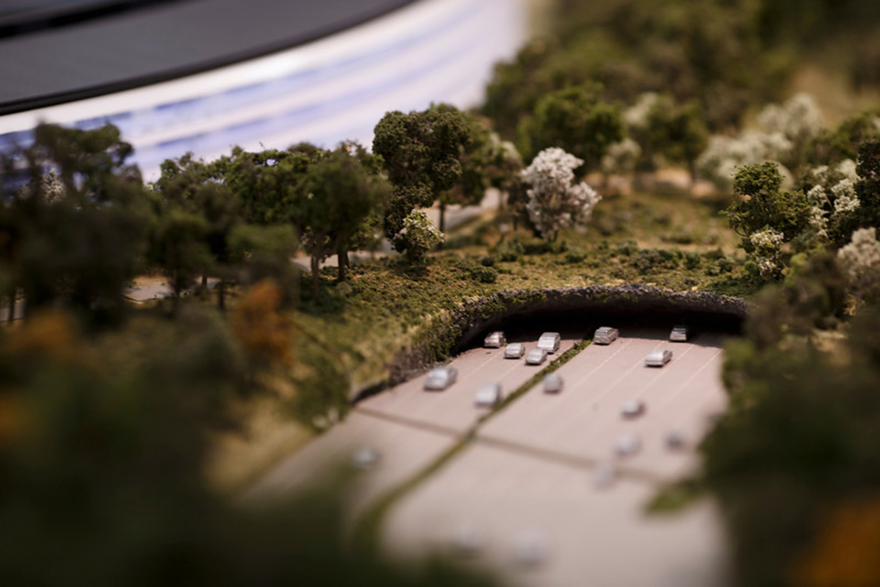 What the shots don't tell you is that "This will be one of the most environmentally sustainable developments on this scale anywhere in the world," according to Dan Whisenhunt, Apple's Director of Real Estate & Facilities. Not only does it use 30% less energy than a comparable building, but what energy it does use is a staggering 100% reneweable—"which is unheard of on this scale, with most of it produced on-site."

And anyone want to guess what this little standalone building is? We have fantasies that inside is a cage-fight-style octagon where Apple weeds out design department applicants in pitched life-and-death battles of skill. 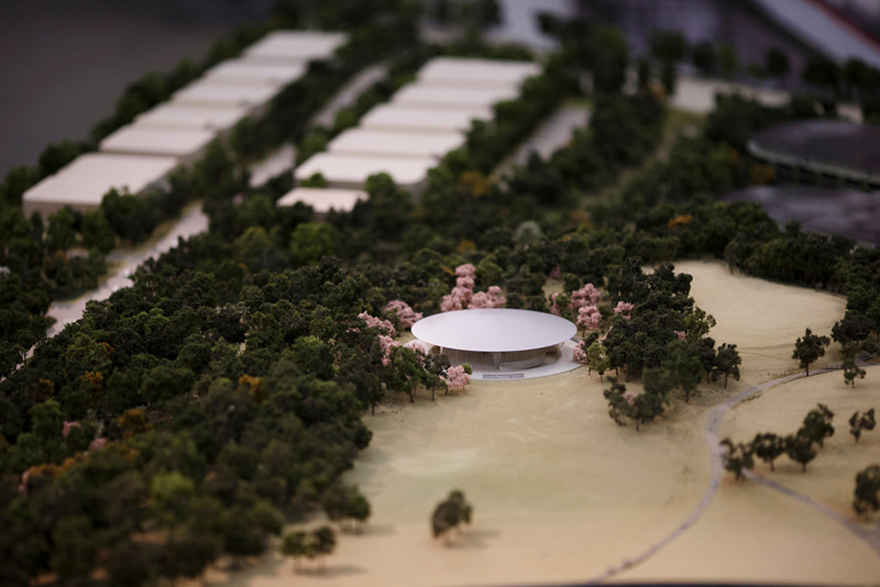 Should this iteration of the proposal get the green light tomorrow, Apple will get set to break ground. And once the projected three-year construction timeline is complete, they'll have created "a place for the most creative and collaborative teams in the industry to innovate for decades to come," according to Oppenheimer.