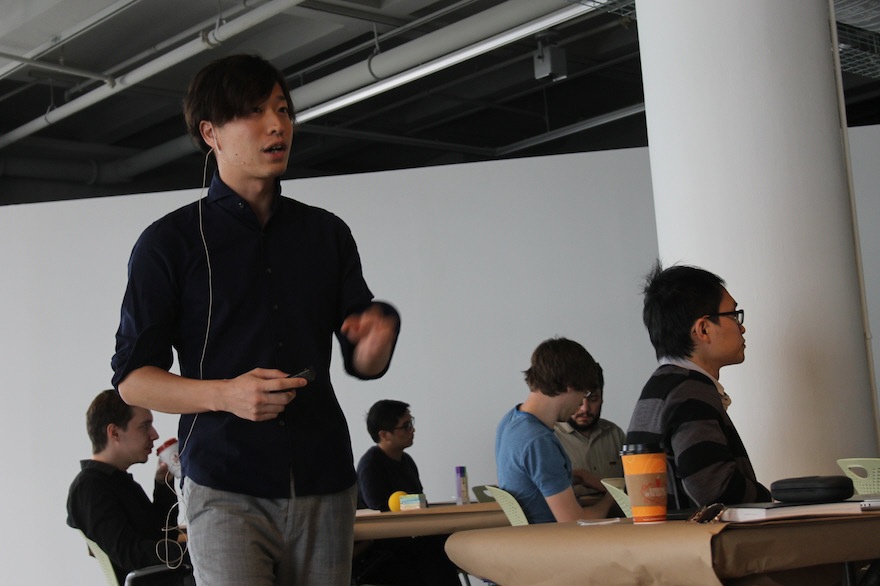 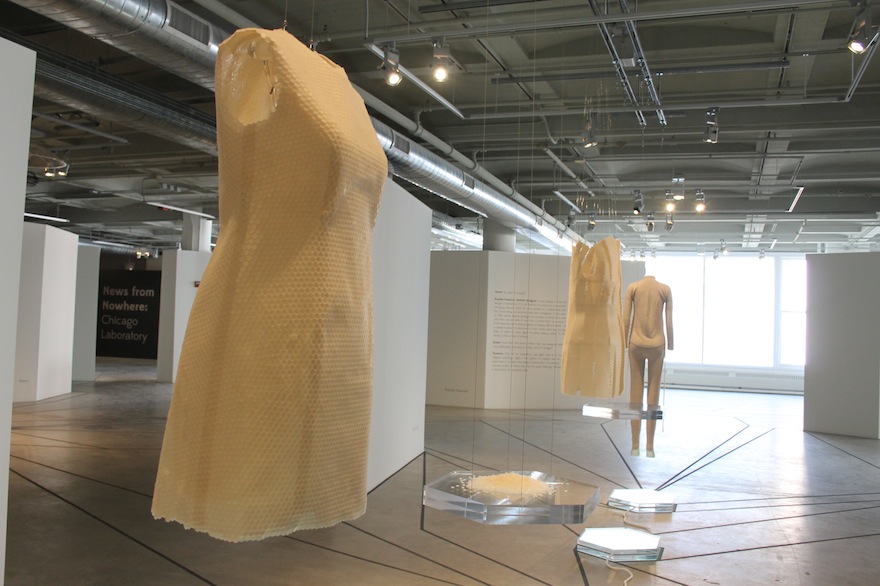 Kuho Jung's Second Skin garment at News from Nowhere: Chicago Laboratory, 2013. Installation view, Sullivan Galleries, The School of the Art Institute of Chicago. Except where noted, all images by the author for Core77.

The premise of Desert Island Discs, one of the BBC's most popular radio programs, is a simple one: if you were sent away to live on a desert island, what would you bring with you? Guests are allowed to take a selection of music (which plays during the program), one book, and one luxury item with them. What makes the show delightful is not the mundane realities of its premise—after all, how would you play the music after the batteries run out?—but the thought process that comes with the assumption of lack.

News From Nowhere, an ongoing exhibition at the Sullivan Galleries at the School of the Art Institute Chicago, takes this basic premise of lack and sets it in the context of design. Developed by Korean artists Moon Kyungwon and Jeon Joonho, News takes the form of a collaborative project in which designers, artists, poets, philosophers and others are invited to imagine a post-apocalyptic world, where humanity almost goes extinct and we must start over from the beginning. The title of the exhibition comes from the eponymous 1890 novel by William Morris, a British designer who imagined a future society in which all property is shared.

A screen still from Moon and Jeong's El Fin del Mundo. Image by James Prinz. Upon entering the exhibition, we are greeted by El Fin del Mundo, a two-channel installation developed by Moon and Jeon, depicting parallel narratives of a young woman in a totalitarian society and an artist developing work on the side. The woman is dressed with plain severity, as many apocalyptic scenarios like 1984 and The Matrix have imagined we will one day dress. She examines a set of Christmas lights without context, while on the lefthand panel we watch the artist install the lights.

Upon entering the exhibition, we are greeted by El Fin del Mundo, a two-channel installation developed by Moon and Jeon, depicting parallel narratives of a young woman in a totalitarian society and an artist developing work on the side. The woman is dressed with plain severity, as many apocalyptic scenarios like 1984 and The Matrix have imagined we will one day dress. She examines a set of Christmas lights without context, while on the lefthand panel we watch the artist install the lights. 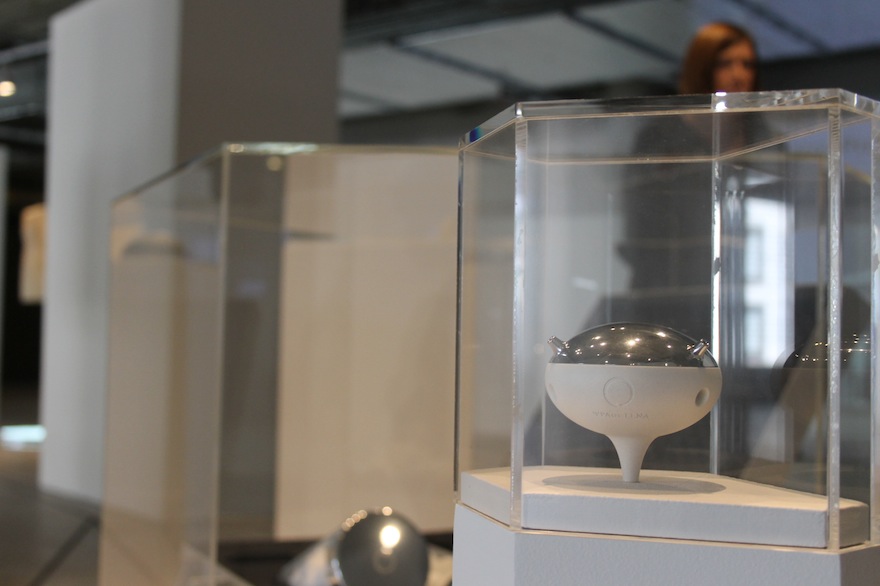 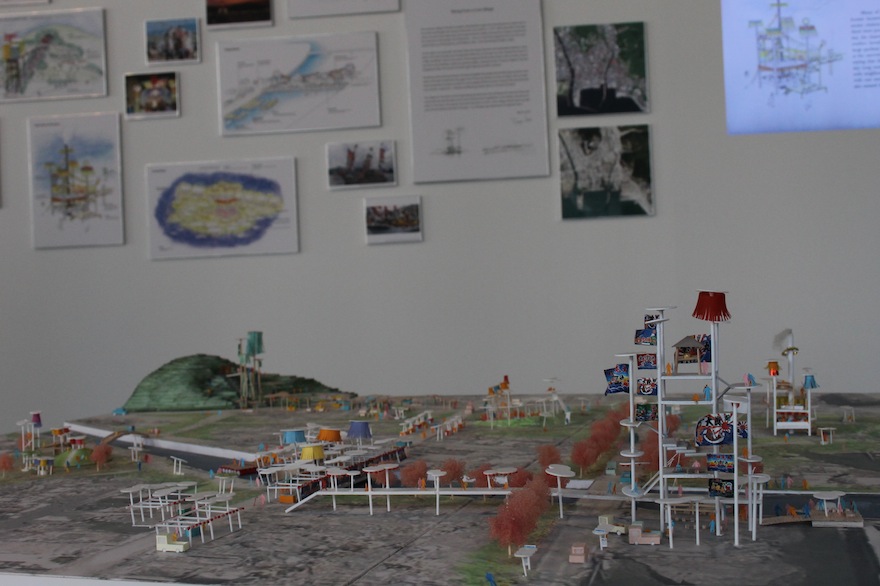 This focus on an object and the narrative behind it sets the stage for much of the exhibition. Moon and Jeon invited leading design thinkers like Toyo Ito, MVRDV and Yu Jin Gyu, amongst others, to participate in the exhibition. Toyo Ito imagined a reconstruction of a Japanese village devastated by the recent tsunami, with a recreation of village life and structures. Takram design engineering's team assembled a series of metallic implants that would make the body more efficient in the face of rapidly-decreasing water availability.These elements of technofuturism belie the premise of the exhibition. There are many parts of the world that have experienced extreme war and devastation, and only in rare instances do they emerge into a high-tech reality. But that's not a critique of this show in particular; it's a common premise of post-apocalyptic literature from the technology-enabled Global North. In a design context, the point of these imaginings is not to propose an actual solution but to provoke a conversation through the designed objects, the backstory and the research that went with it. 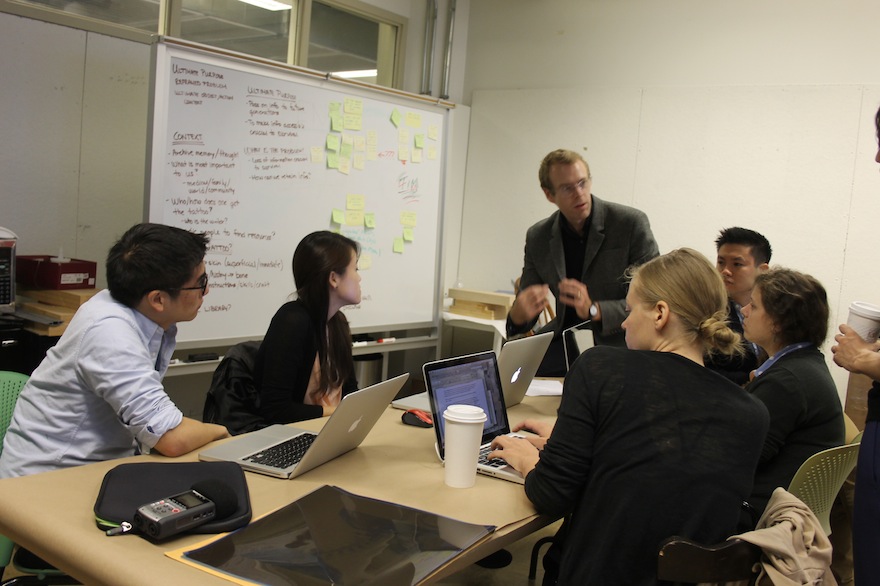 Prof. Tim Parsons and Kaz Yoneda meet with students to talk about their projects.

More than an exhibition of speculative design, Moon and Jeon have set up an experience that evolves over time, in close collaboration with their exhibition partners and the School of the Art Institute's student body. News is in fact an expansion of the artists' installation at Documenta 13, and Sullivan Galleries curator Mary Jane Jacob invited them out to Chicago to develop the concept out further. 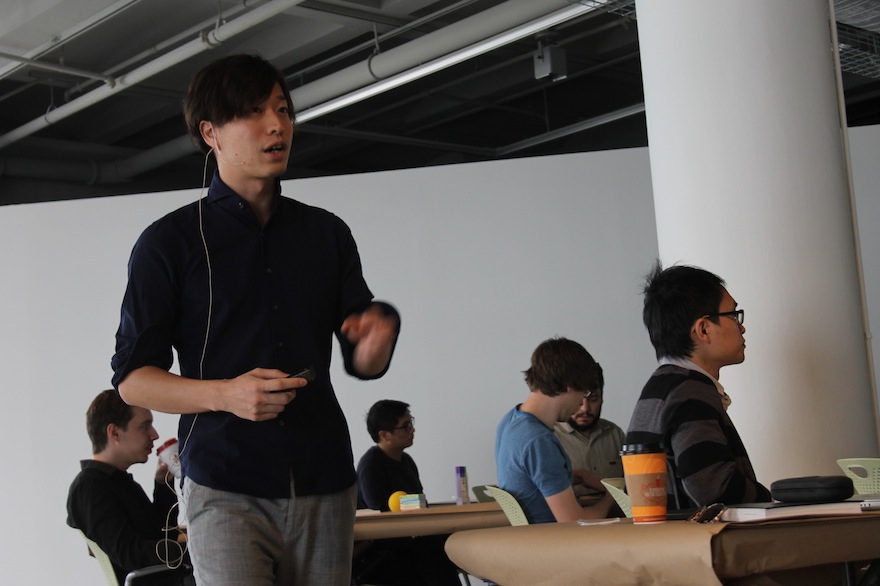 SAIC flew me out to see a workshop led by takram design engineering, a firm based in Tokyo. Two of their representatives, Kaz Yoneda and Kotaro Watanabe, led a workshop around this theme of designing for the apocalypse, and they brought in master's students in the design objects program to work with them. As Prof. Tim Parsons noted, the process of speculative design created a dialogue between art and design and provided a chance for students "to really use your imagination and place yourself in your own future."

The workshop evolved over the course of about 30 hours, a fast-paced design sprint in contrast to what students told me is the usual project schedule of a few weeks to an entire semester. Students formed small groups tasked with reimagining basic objects, like a pen or a watch, 100 years into a resource-constrained future. In a charming exercise, Kotaro provoked this rethinking process through "tangent sculptures," i.e., deconstructing objects via ethnographic, functional, sensory and other lenses without using the object's name. A cup, for instance, is not a cup but a cylindrical object with a bottom but no top. 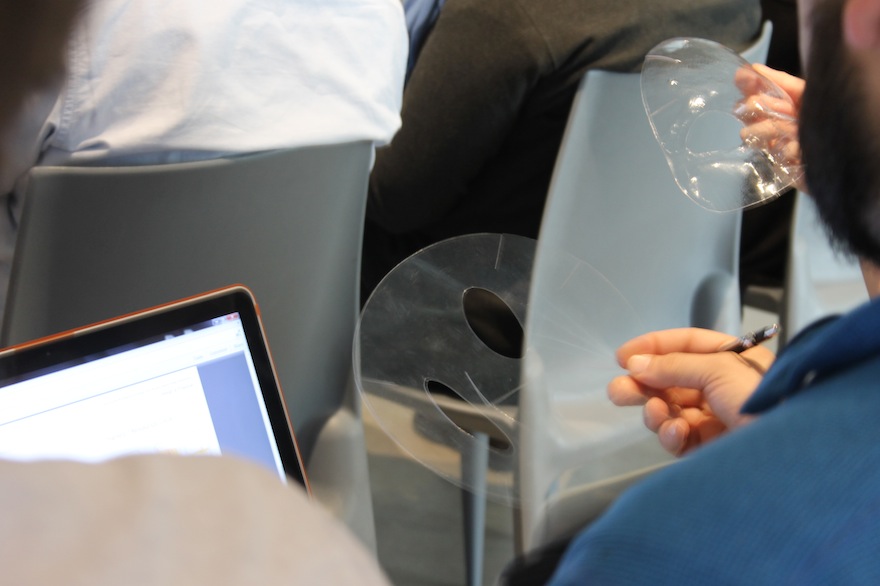 One group of students reimagined spirits 100 years into the future. Understanding alcohol as a "social lubricant" and something that "creates an altered state of mind", they constructed a mask that forced the wearer to smile. The work tapped into the facial feedback hypothesis, an approach in psychology that suggests that the physical act of smiling evokes positive feelings. The physical mask came together in the very last hours, as the team debated and researched the history and backstory, challenging each others' assumptions. 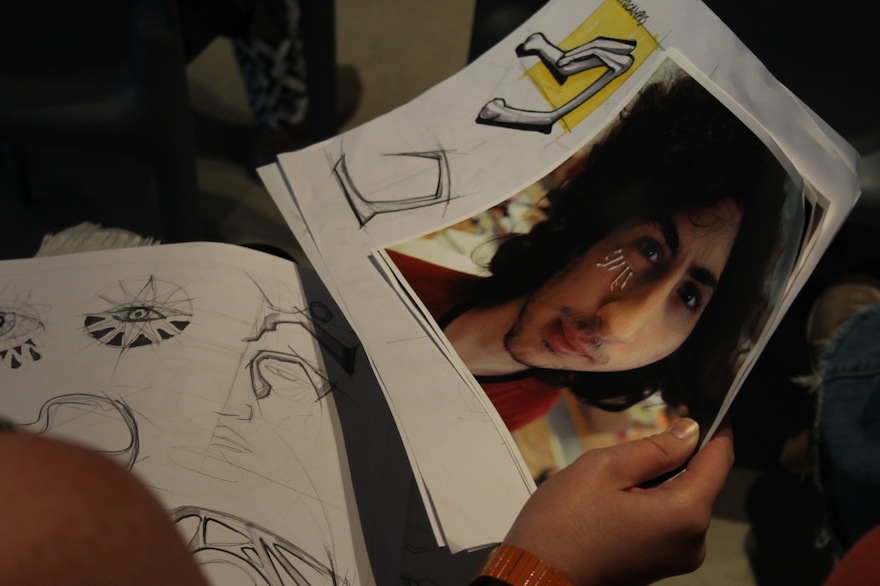 This photo of Eli Bensusan was created as part of a reimagining of money, with student Nayeon Kim and a student who asked to remain anonymous .

Another group reimagined money. In a future world with no currency, barter returns to the fore, but the barter is not of objects but memory. In a world of Bitcoins and stock market crashes on Second Life, the valuation of memory provokes thinking not just about the future but the present, and the way we think of currency and value. 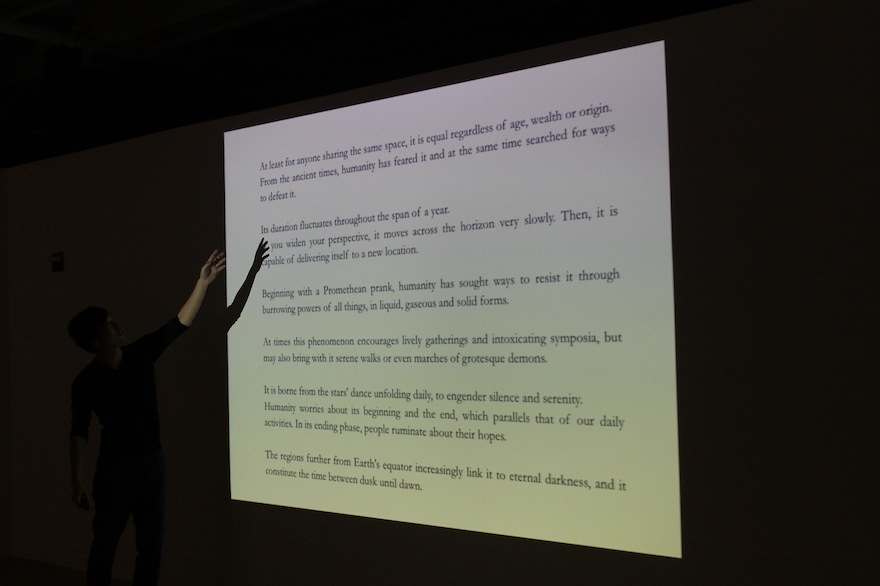 Can you guess what object this is?

The exhibition evolves in this way until it wraps up in December, with another planned workshop on fashion by Kuho Jung and lectures and talks from Toyo Ito and others. As the workshops move forward, the student work is included in a dedicated part of the space, and the workshop area will remain active and accessible until the end of the show.

"The way it's framed," noted design objects student Ben Dayton, who worked on the mask object, "this is not a final solution. It points in a direction and brings up ideas and questions."