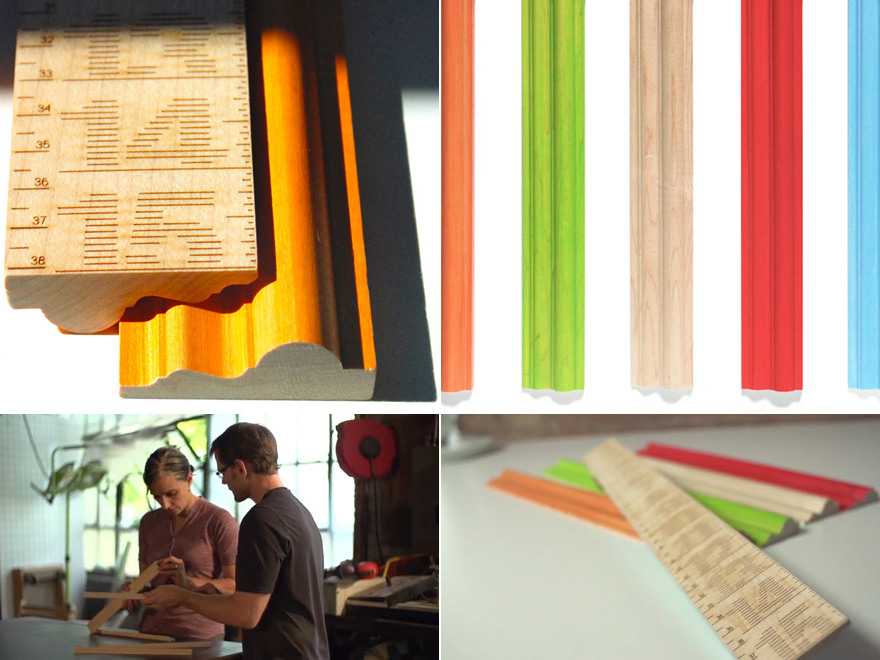 The age-old expression "measure twice, cut once" used by carpenters—and the inspiration behind a new project from materious, a.k.a. husband/wife design duo Bruce and Stephanie Tharp (Bruce has contributed to these very pages). Introducing "Cut Once," the designer-friendly ruler that's catered to making measurements quick, multi-functional and easy on the eyes. But what's as interesting as the product and design is how they're using Kickstarter not only to raise money but also to explore crowdfunding as a phenomenon in itself.

Not only does the measuring stick double as a holder for your favorite writing pen or pencil, but it also serves as an educational tool. Bruce is integrating this Kickstarter endeavor into the syllabus of an entrepreneurial industrial design course he is teaching—with help from Kickstarter rockstars like Scott Wilson & MNML of TikTok/Lunatik fame—at the University of Illinois at Chicago. Each student is required to submit a project to the crowdfunding site and have it approved. Thus, "Cut Once" serves as a case study for the course, one in which the teacher is learning right alongside the students. Bruce tells us more about the class and the creative process behind Cut Once:

Core77: Tell me more about Cut Once's form. How does the molded shape play into the design's story?

Bruce Tharp: We began with the idea of molding—if not actual wooden material, but at least the aesthetic. We wanted to make sure and reference that while it spoke to the idea of molding, it needed to function. In spending a lot of time reviewing molding profiles in books and online, it became clear that Chair Rail moldings (the kind that attach to walls to prevent chairs' backs from damaging the walls) were the right general form. So we modeled our profile on those, but allowed the right width, enough room for the pen/pencil, and allowed it to be used to mark lines effectively. The fact that it forms a recessed edge so that ink is not pulled under the ruler by the capillary action, was a happy accident.How are your students getting involved in the Kickstarter process?

The students are being introduced to what I call a D2C approach—designer to consumer, as opposed to B2B or B2C. The idea is to challenge the conventional notion of what being a business is all about. The focus is on how a student or recent grad can be an entrepreneur on the side, either leveraging the Internet to run their venture or through product licensing (selling their ideas to companies in exchange for royalties). These ventures and licensing can be "side projects" or they can be the start of full-time effort. The two-class track is called Entrepreneurial Product Development (EPD) and one semester is EPD-Venture, the other is EPD-Licensing.

For this semester's venture class, students are starting their own Kickstarter projects as a studio exercise. By the end of the class, they will have a finished campaign. They do not have to follow through with it, but it does have to be approved by Kickstarter. While I know that many students will probably not keep their project live, several have stated their intent to follow through. Next year, I may have the project run into the following semester or have them show up to class with a finished design—it's a lot to figure out for the first time in just one semester, especially when there is money on the line and they could potentially lose money on a project. 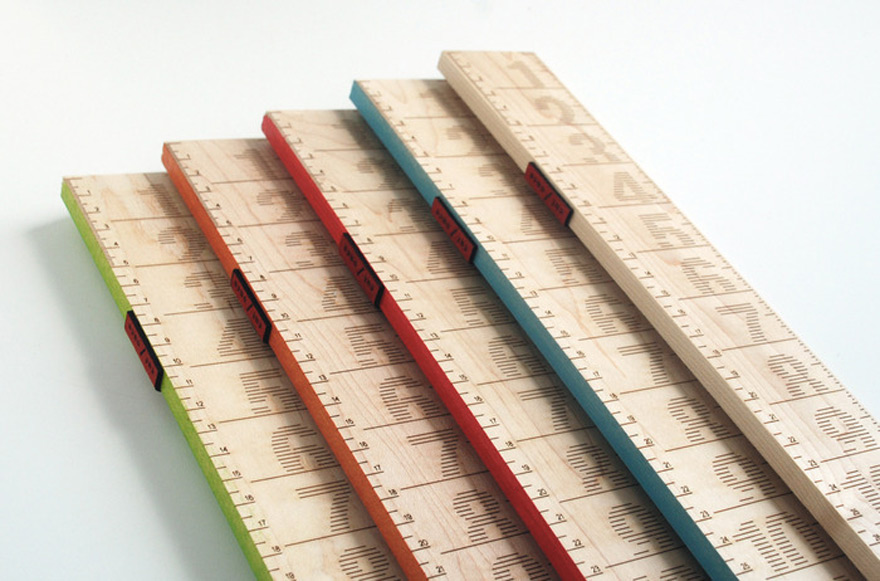 So how does "Cut Once" play into all of this?

What I am doing is using my own project, "Cut Once," as a live case study. The product was mostly developed by the start of class, but I'm sharing the crowdfunding preparation process with them. We discuss the development of the campaign: Financials, strategy, video, etc. The students even provided feedback for me on the campaign before it went live. What is risky and exciting is what happens as it unfolds. It's a live case study and we do not know how it will turn out or what the major lessons will be. The students seem excited and are engaged in a way that they would not be otherwise.

What aspect of "Cut Once" are you most proud of?

It was a very challenging project. In the video, we say it's "deceptively simple," and I even talk about it to the students as "just a stick with numbers." Part of the lesson for the students is how difficult it can be to realize even a product that is so simple, with such a low bar of utility. In my view, one of the problems with design education today is that we are moving away, perhaps especially in the US, from well developed form. This is something that has been getting pushed out of curricula in order to make time for all of the CAD, rapid prototyping, design research, interaction design, etc.

So, we are happy with the fact that we were able to pare it down to something very simple but still beautiful, visually and conceptually. In materious' work we strive for a balance between beauty, function and meaning. And we think we were able to do this in an environmentally respectful manner—in the short term with material choice, and in the long-term with its emotional durability (with heirloom potential). And this simplicity also supports the pragmatics of self-manufacturing. It can be fabricated efficiently, locally and for a reasonable price to the consumer. 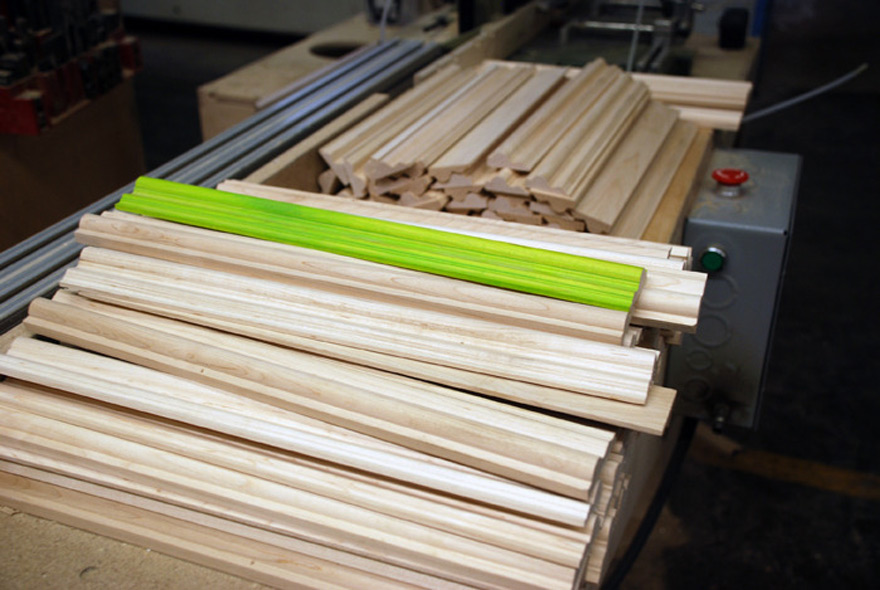 When did the idea for "Cut Once" come about? Was there some kind of lightbulb moment?

I went back to my sketch books to try and find that out for the class and it's actually not so clear to me. Sometimes there's a lightbulb moment and sometimes it starts with a problem/opportunity. Often the problem or opportunity is somewhat tacit—which, as they say, prepares the mind for the flash of inspiration. I often look at my grandfather's stapler sitting on my desk and I think of him when I see it. I also am surrounded by a sea of cheap and meaningless stuff that is serves a function in the cheapest possible manner (though I am trying to constantly upgrade). I think that juxtaposition day after day sunk in to my subconscious and one day the idea came. I do know that we started with the idea of molding, but the relationship with the carpenter evolved. Some of our early sketches and renderings were with extruded aluminum and not wood.

Some of the concerns we had were that rulers, specifically desk rulers not used by those in the arts or technical fields, were pretty unremarkable and neglected objects—cheap, functional things. It's an object that nearly everyone has, but has no meaning. We thought, can we bring some dignity to this? Can we re-imagine, re-enchant this object to the trifecta of beauty, function and meaning (that is sustainably-minded and marketable)? 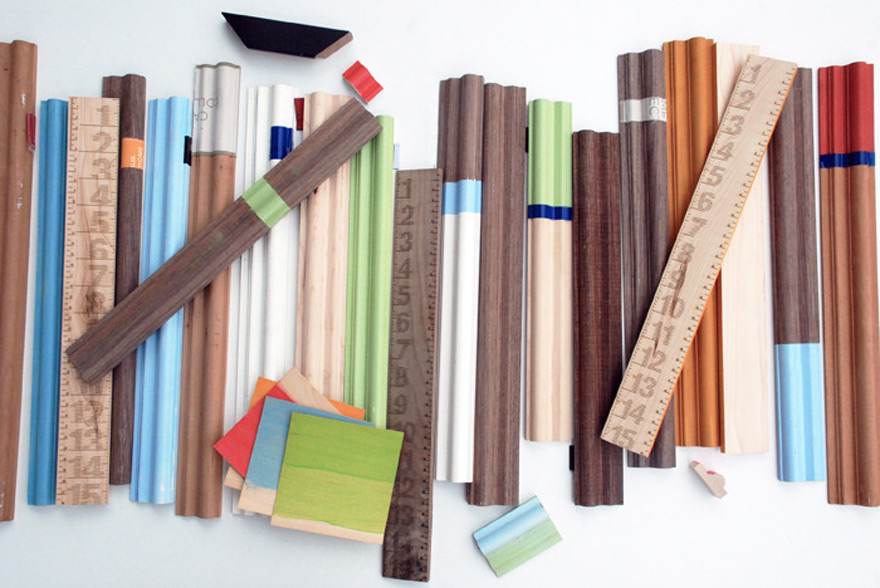 Check out Cut Once and contribute to their campaign here.