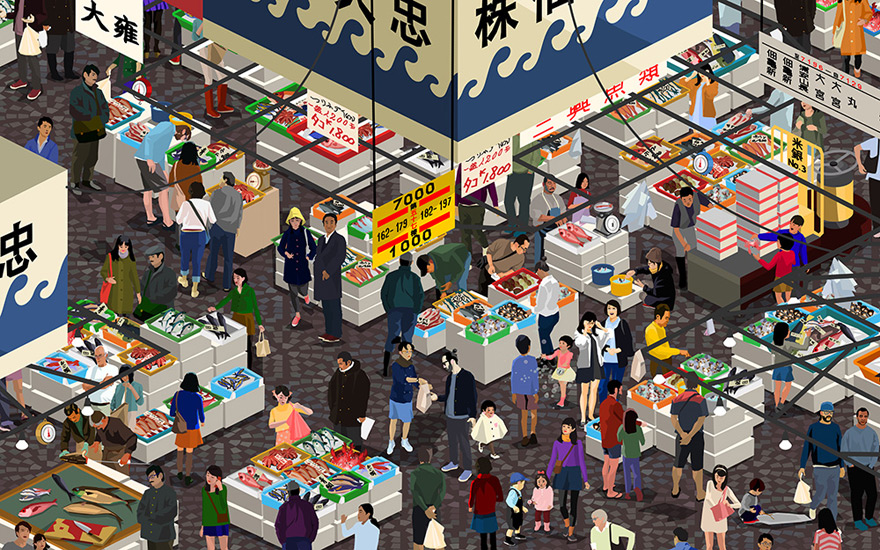 We love open air marketplaces because they mix economic and social transactions between people with a variety of purposes: business, leisure, tourism, and daily shopping. At the heart of every market is the energy of entrepreneurship. Vendors use makeshift tools and ingenious techniques to move their goods efficiently, while customers haggle with expert price negotiators to determine true market price. Many of these markets have been in operation for decades and directly reflect the cultural spirit of their locale.

As designers, we are interested in the way that all the minute details of an environment add up to create a rich and lively atmosphere. We wanted to produce a series of drawings that would represent this, and invite others in as observers. 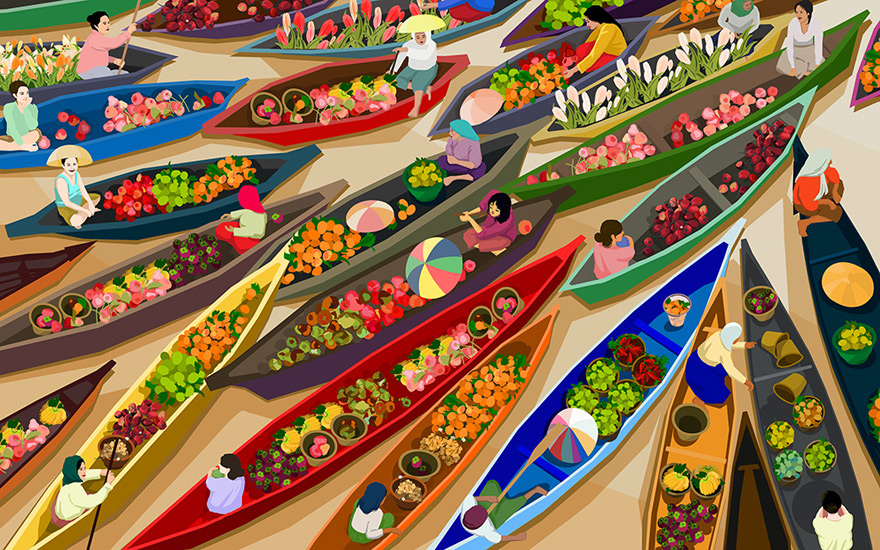 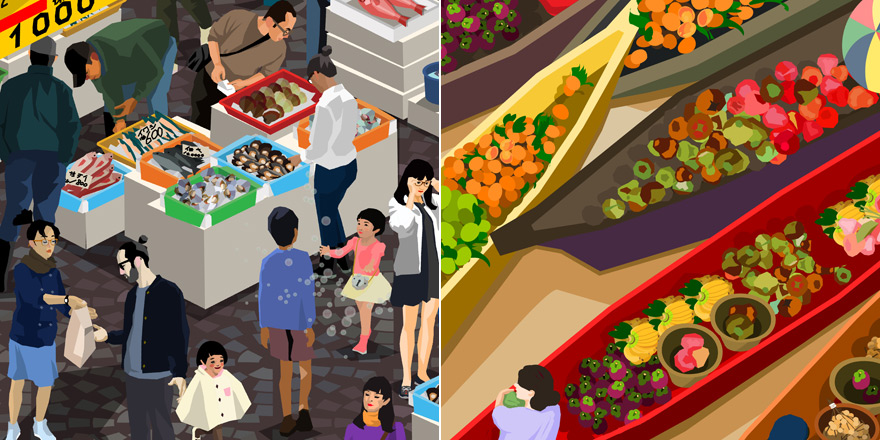 The series is launching on Kickstarter with three markets in Asia-Pacific region: Raohe Night Market in Taipei, Muara Kuin Floating Market in Indonesia, and Tokyo's Tsukiji Fish Market (if the campaign is a success, they'll expand to other continents). Given their axonometric perspective and infinitesimal level of detail, I couldn't help but think of Li Han and Hu Yan's equally beautiful A Little Bit of Beijing, though the latter work is more expressly concerned with inhabited architecture. The "Marketplace Posters" take a more anthropological perspective, portraying various individuals interacting with each other and their surroundings.

We had the chance to chat with Smith about the captivating artwork and how the project came about.

Core77: What was the inspiration for these posters?

Lisa Smith: Caroline and I traveled to Taiwan together in 2010, where we spent a lot of time at the night markets. The kernel for this idea developed then—we often reminisce about the special atmosphere of the night markets, and have always wanted to formulate a project based on our experiences.

The project started off with kids in mind. We like the "Where's Waldo" feel of each scene, and wanted to encourage kids to appreciate observation as a way of "reading" an environment. As the drawings evolved, however, it was clear that they appealed to all age groups, so we aren't being specific about who or where its for, and let the viewers decide.How did the collaboration come about?

Jingyao Guo produced the Trivet Runner illustrations for us as a trade. We were really impressed by her work, and we knew we wanted to do a collaborative project that would showcase her incredible capacity for detail. We had just finished drawing the MCA Cutaway Map, and wanted to collaborate with Jingyao on a project of the same nature, except this time we would be illustrating markets instead of a museum. And, of course, it would be Jingyao doing the illustrating and not us. 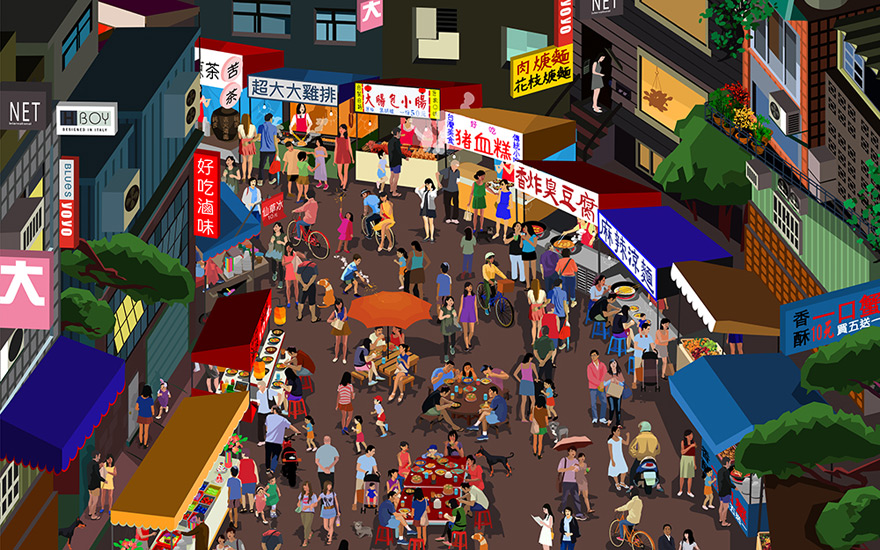 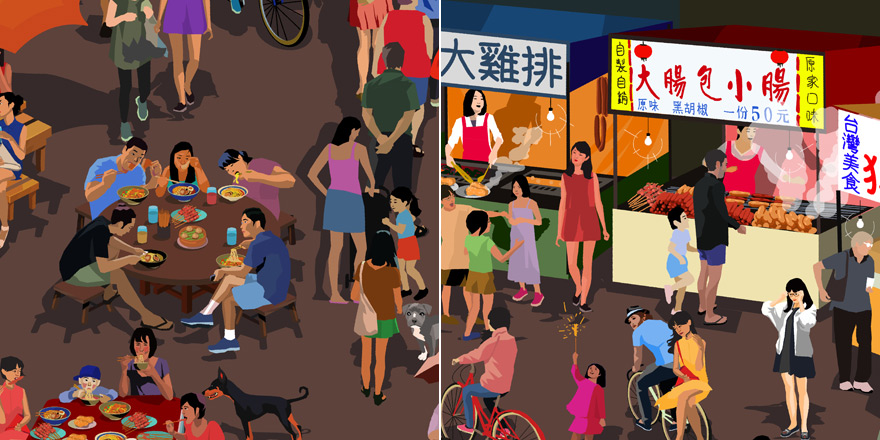 What was the source material for the illustrations?

The Taiwan Night Market was the first to be drawn, because of our firsthand knowledge of them. Then, together with Jingyao, we did a lot of secondary research through image and video searches, and descriptive texts written by people who had visited the market. Based on this, we made notes, she sent sketches, and we worked together to refine the composition and content for each drawing. First we settled on the view, and as the drawing developed, details were added to make each drawing as specific as possible. We have to stress how much work Jingyao put into these—each drawing takes about a month to produce.

Are these illustrations intended to be a comment on how online marketplaces (including Kickstarter) are inherently unable to match the spirit and vibrance of their real-life analogues, or am I just reading into it too much?

That's an interesting reading of the drawings. We weren't so much interested in making a comment about the internet as we were intent on celebrating the vibrancy and humanity of public markets. But the contrast to online marketplaces is so extreme that its not surprising it would feel like a critique of typical internet commerce. We hope that people who encounter these prints will look at markets with new eyes, and see them as highly creative, entrepreneurial, and important social spaces for all members of society.

Head over to Kickstarter to learn more about each of the marketplaces and get your hands on a poster!