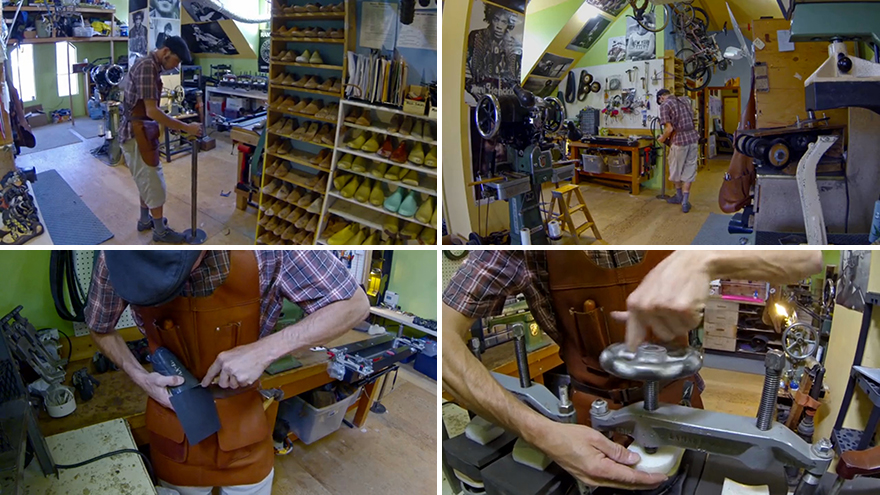 As someone whose primary transportation mode is walking, I wish sneakers were designed more like cars. When your car's tires wear out, you pop them off and install new ones (or remold them if they're expensive); but every eight months I have to toss an entire pair of kicks because the treads are gone, and there's nothing for it. No local business I know of will re-sole a $100 pair of running shoes.

Rock climbing shoes are a different story, as they can be resoled and repaired. Places like The Gear Fix, which is three hours south of Core77's Portland HQ in the city of Bend, Oregon, make their living by repairing outdoor gear: bikes, climbing equipment, ski equipment, camping stoves, backpacking gear, and yes, climbing kicks. And re-soling the latter does not look easy, as it's a blend of art and science. An anonymous TGF employee undergoing an apprenticeship on how to do half-soles posted a video showing the process:

There isn't much actual material used, but just look at all of the equipment required, from the wooden inserts to the hand tools to the machinery to the cool little floor-stands. Then there's the learning time, of course; the unnamed apprentice in the video had been at it for about five months prior to shooting it. So how much do you think it costs for a job like that? I was well surprised by the low price: "Basically $35 for a pair of soles," writes the shop, "and $10 each if you need the rands / toe caps replaced." That's nuts.

A couple of climbing shoe notes:

- If you're wondering why this particular repair is half-sole and not full-sole, the area you see being replaced—from the ball of the foot to the toe—is where most of the wear typically occurs in a climbing shoe.

- The "rands" refers to the parts of rubber above the sole, like the "sidewalls" of the toe, for instance.