[Editor's Note: This was adapted from a post on Synthesis Design + Architecture's PURETension charging concept for Volvo. It has been updated to include a related news item about HEVO Power's resonance charging system.]

HEVO Power has been making headlines this week following the announcement not of the product itself but the fact that they've made the semifinalist round for the SAFE (Securing America's Future Energy) Emerging Innovation Award. That and the fact that they'll be launching a pilot program for their flagship wireless electric vehicle charging system in New York City in early 2014. HEVO Power is founder Jeremy McCool's approach to reducing America's dependence on foreign fuel—he served in Iraq before recently completing his Master's in Urban Policy at Columbia—a solution to overcome certain barriers to EV adoption (which we've previously explored in relation to BMW 360° Electric). Wired reports:

Traditionally, inductive charging requires a primary coil to generate an electromagnetic field that is picked up by a second coil mounted underneath the EV to juice up the battery pack. But it's not particularly efficient, with large amounts of energy dissipating through the coil. With a resonance-based system, both coils are connected with capacitors that resonate at a specific frequency. The energy losses are reduced and you can transmit more energy at a faster rate and further apart.

Hevo's system comes in three parts: a power station that can either be bolted to the street or embedded in the pavement, a vehicle receiver that's connected to the battery, and a smartphone app that lets drivers line up their vehicle with the station and keep tabs on charging. 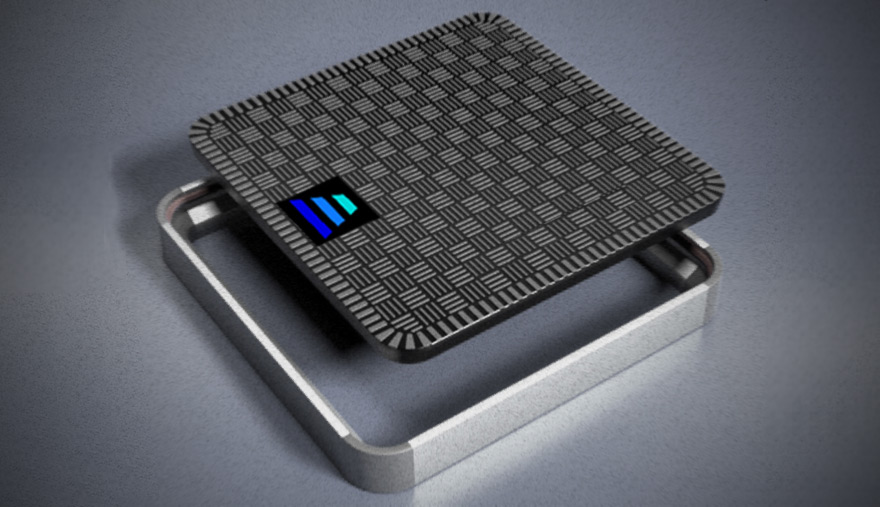 To be honest, I'm not so impressed by the fact that they 'blend in' to extant infrastructure, I see it as a kind of quasi-skeuomorphism: Granted, HEVO is not a vestige of an outdated sanitation system, but the manhole-cover aesthetic is essentially a marketing hook for a subtle, street-based. (Then again, the idea of transposing a charging port onto the traditional gas tank is as good an example of the S-word as anything.)

In any case, the pilot program—HEVO is partnering with NYU to install a pair of stations for electric Smart ForTwo's near Washington Square Park—is widely being hailed as a major step towards greater adoption of electric vehicles... ostensibly because New York City is a tougher crowd than, say, the Greater Bay Area. Yet a far more ambitious plan in Gumi, South Korea, is already underway. Engineers at KAIST have developed what (I assume) is a similar resonance charging system, SMFIR, which boasts a whopping 85% transmission efficiency and will be embedded in bus lanes in Gumi, under certain stretches of road.

The other upshot of KAIST's SMFIR system is that the buses can incorporate smaller batteries, which allows for weight and cost savings, as well as reducing the unquanifiable variable of range anxiety. With a bit of data, I'm sure someone could undertake a cursory CBA of whether installing a widespread induction/resonance charging system—cf. Citibike stations: start dense within a limited area and slowly expand, maintaining the same density—would bring down the cost of (and resistance to) the vehicles themselves, and what the break-even point would be. (It's also worth noting that only certain battery systems will work with these charging systems.)

Cost considerations aside, I'm also curious about issues of user error, or the huge potential for such: For example, how closely the vehicle have to be aligned to HEVO power for optimal transmission? If, say, a Vespa or XL SUV shifts the parking spaces by half a car length, does it preclude use of all/any charging stations? And, for that matter, will regular cars be allowed to park or stand there, or only EVs? According to Wired, HEVO is currently "focusing on Neighborhood Electric Vehicles with small footprints, low speeds, and minimal battery capacity... perfect for inner-city delivery vehicles." But more often than not, I see delivery trucks idling on shoulders, at hydrants and (of course) in bike lanes—delivery parking is few and far between in the City—which brings us back to Citibike as a case study. In order for HEVO to be remotely practical, there will need to be enough of them to support fleets of electric delivery vehicles within a given range.

It's crazy, when you think about it: You park your car in a hot parking lot. Come back later and the car interior is absolutely baking, thanks to the sun's passive energy. So you then spend fossil fuel energy cranking up the A/C to get the interior back down to a habitable temperature. It would make more mathematical sense, and be more ecologically sound, if we intelligently used the sun's energy to cancel itself out, by powering the car and the A/C.

That may be a long way off, but we're getting closer to that ideal, as evidenced by Synthesis Design + Architecture's Pure Tension, a collapsible pavilion designed to showcase Volvo's V60 Hybrid Electric Diesel. SDA's design was the winner of a Volvo design competition to create a pavilion to merely showcase the car at traveling events, but principal Alvin Huang and his team took things further: The crazily flowing shape of the Pure Tension is covered in fabric-embedded photovoltaic panels that absorb energy, from either the sun or artificial lighting indoors, which can then be transmitted to the car. In other words, it's like a huge sunshade that you can plug the car into.

It also fits handily into the trunk when broken down. Yes, you still need a crew to assemble the thing, but this isn't intended to be a practical, ready-to-buy solution; it's a pure exploration of what's possible using current technology and fabrication techniques. It also handily incorporates the "dynamic mesh relaxation" process—"a real-time digital form-finding process that utilizes computation to simulate physical forces in materials to discover form/force equilibrium" that SDA has been independently researching. It's something like "tensegrity" on steroids, or what Buckminster Fuller could have done had he had access to CAD.

In the following video, Huang discusses the project and doesn't gloss over the design elements that had to be sacrificed in order to realize the project. (For example, the Pure Tension takes an hour to erect, a concession to budgetary constraints; the original concept had the entire thing popping into shape when released, like one of those twist-folding photography reflectors.)

Of course, HEVO and Pure Tension represent opposite ends of the spectrum when it comes to charging solutions: the former may well find its way beneath our feet (or wheels) within a few years, while the latter is a fantastic experiment to literally and figuratively stretch the limits of current technology. If it remains to be seen what technologies will ultimately reach the consumer, it's clear that the success of the electric vehicle is contingent on a seamless charging ecosystem. Thus, skeuomorphism—superficial design that marks an intermediate step from one paradigm to another—is a moot point by its very premise; rather, the entire system needs to change. Automobiles have been dependent on fuel since day one, and while gas or EV stations won't disappear overnight, HEVO (and SMFIR) offers a compelling alternative: a future free of refueling or recharging, where our cars are powered by the very roads on which we drive.