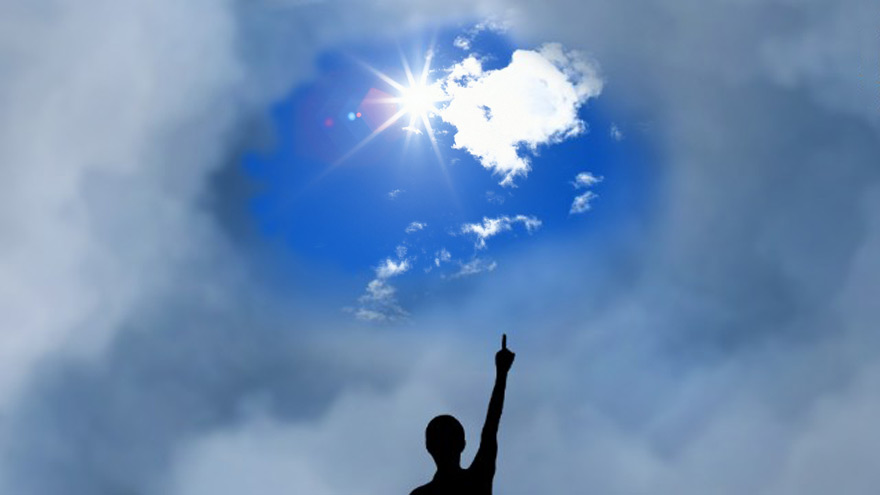 In what is surely a sign that the world is getting smaller—or perhaps just an indication that urbanism is a hot topic these days—the last two months have seen Daan Roosegaarde bounce between stages on both sides of the globe. In August, the Dutch designer took a short trip to Copenhagen to accept the INDEX: Design to Improve Life Award for his much-lauded "Smart Highway" concept. A month later, he turned up at Beijing Design Week as a speaker at the intersection of the "Smart Cities" theme and the Guest City program, representing his native Amsterdam. But if his globetrotting lifestyle is partly predicated on his nationality, so too is his work informed by his experiences abroad: back in his homeland for Dutch Design Week, Roosegaarde has put forth yet another visionary proposal... inspired by Beijing's infamous smog-o-sphere.

Developed in collaboration with a team at TU Delft, "SMOG" is designed to suck pollutants out of the sky by generating a massive electromagnetic field using copper coils embedded in the earth. "It's a similar principle to if you have a statically charged balloon that attracts your hair," Roosegaarde notes in an interview with Dezeen.

As the story goes, Roosegaarde drew on his firsthand experience during Beijing Design Week, when he happened to stay at a hotel with a clear view of Rem Koolhaas's CCTV Headquarters. "I had a good day when I could see it and I had a bad day when I could not see it. On a bad day the smog is completely like a veil. You don't see anything. I thought, that's interesting, that's a design problem." If he gets the project off the ground, so to speak, it will 'drain' a column with a diameter of up to 50–60 meters of the particularly nasty particulate matter; he likens it to 'drawing' by erasing smog—I'm imagining something like an inverse skywriter.Of course, it's one thing to present a lofty concept with renderings and animations at Design Week; navigating the nebulous logistics and bureaucracy of turning it into a reality is another matter entirely. But Roosegaarde has a solid track record: After all, "Smart Highway," which garnered an initial round of press when it won a Dutch Design Award almost exactly a year ago, has been on track to launch in Holland with a pilot program by the end of the year even before he won the 100,000€ prize attached to the INDEX Awards. Roosegaarde is similarly optimistic about the timeline for "SMOG"—he's already in conversation with the mayor of Beijing, and he is forging ahead with the R&D process.

Yes. We have a 5×5-meter room full of smog where we created a smog-free hole of one cubic meter. And that happened this week. And now the question is to apply it in public spaces... The research and development is the biggest hurdle as always. It will take another 12–15 months with a good team of people to make it work, to make it safe. But we know it's possible and you know me by now: I have a scientist who says it's possible, you have me, a designer who creates the imagination and you have a client who is desperate. And now all we have to do is find the "merge" button. It's a new challenge.

In the interest of corroborating Roosegaarde's story, I too bore witness to Beijing's carcinogenic weather patterns, as well as what residents have long suspected to be the work of the Beijing Weather Modification Office. For the past few years, the smog has consistently lingered until the October 1 Holiday, when a so-called 'blue sky day' broke the spell overnight. I wasn't so sure when I woke up to overcast skies that morning, setting out for Steven Holl's "Linked Hybrid" in drizzly, miserable conditions. By lunchtime, I'd resigned myself to working at a café... only see the skies clear before my eyes as I gazed out the window. Within a few hours, the sun had dried the streets and it ended up being the most pleasant day of the week I'd spent in Beijing, restoring my faith in PRC mojo. It's no wonder, then, that the Chinese government has taken an interest in Roosegaarde's variation on the weather machine.

Via a (Dutch only) segment in De Wereld Draait Door

In any case, "SMOG" happens to be particularly timely with the recent news of what has already been Wikipedia'd as 2013 Harbin smog, which broke just the day before Roosegaarde unveiled the project. The Internet hype machine, it seems, can be just as felicitous as the weather.