Benjamin Hubert on Carrying a Notebook, Taking Productive Breaks, and Why Design Is Not a Glamorous Profession 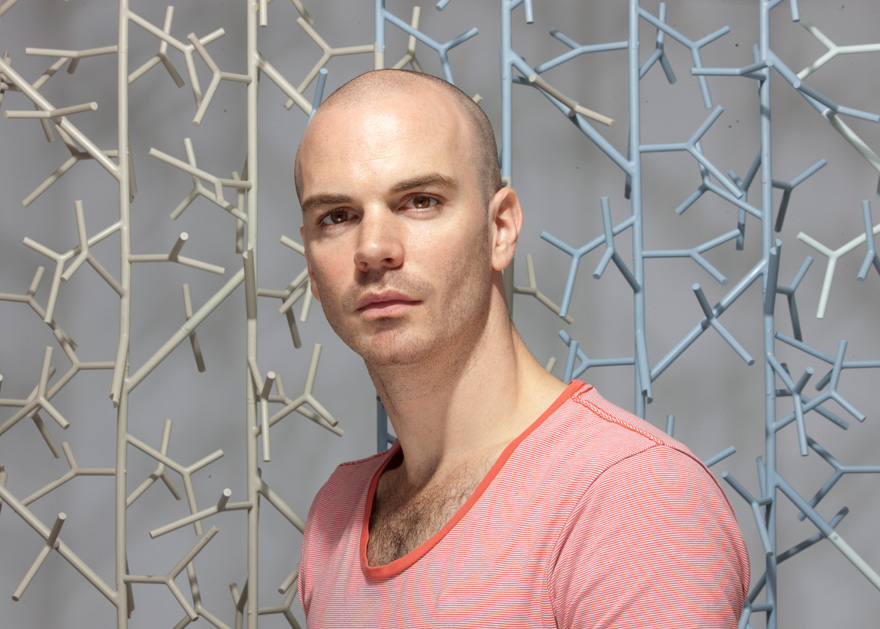 This is the latest installment of our Core77 Questionnaire. Previously, we talked to Sam Hecht of Industrial Facility.

Current projects: Most things we can't talk about, but we're working on everything from furniture and lighting to smaller desktop objects and interiors and installations and wallcoverings. It's a very large range.

Mission: To create objects that solve problems and are innovative. 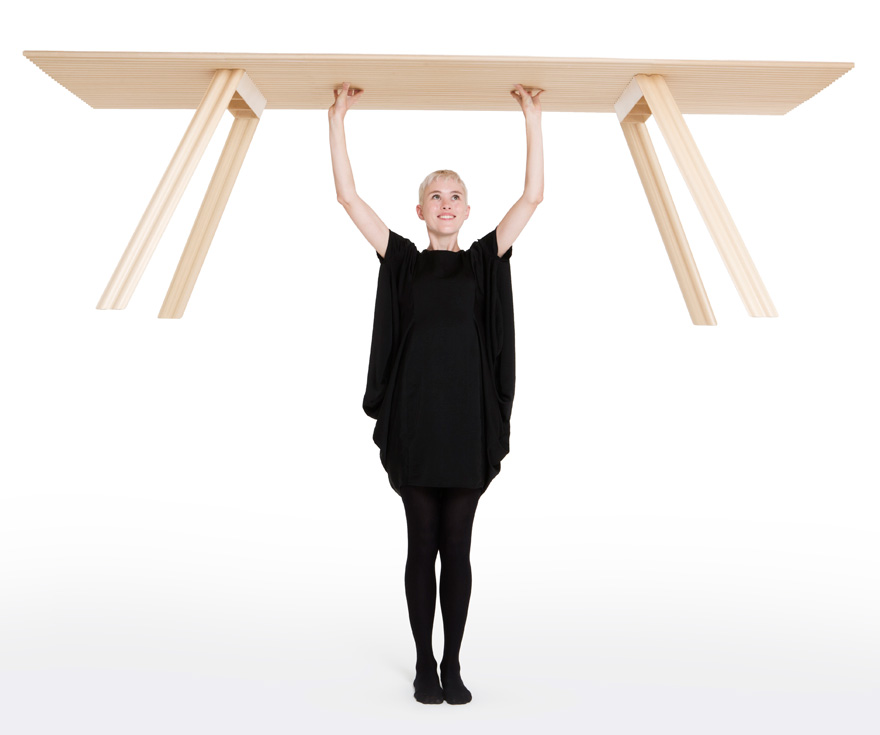 Ripple is made by corrugating plywood through pressure lamination, a process developed by Hubert with the Canadian manufacturer Corelam. 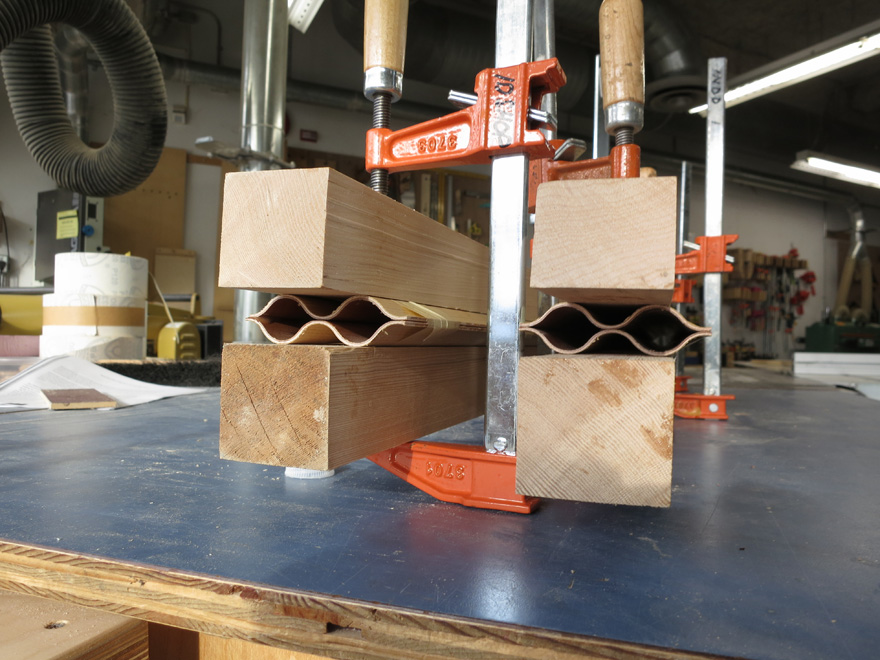 When did you decide that you wanted to be a designer? When I was 18. It was a decision at school to continue studying design rather than art, and I made it by choosing a course at university in design.

Education: I studied industrial design and technology at Loughborough University.

First design job: Being a design intern at a company called DCA

Who is your design hero? I don't really think about things like that. We tend to think about things outside of our industry, and we don't focus too heavily on what people have done and what they're doing. So I wouldn't say we have a hero. 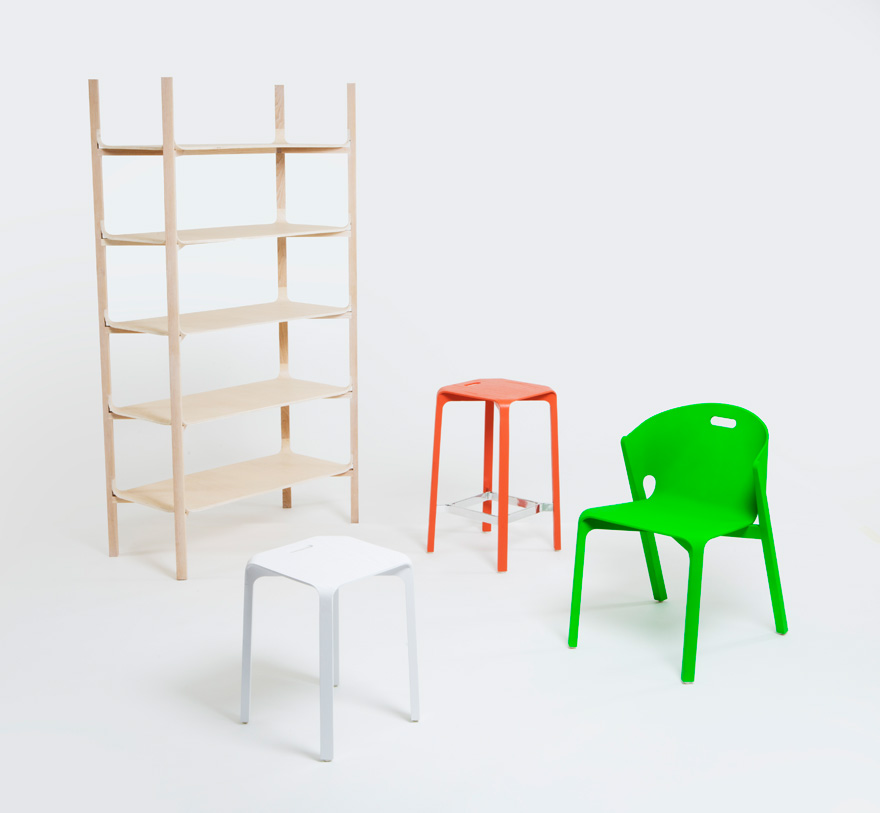 Hubert's new Pelt collection for De La Espada includes a chair, stools, and a shelving system, all of which feature a thin plywood shell wrapped around a solid ash frame.

Container is a desk lamp made from ceramic components secured together by a silicon band. 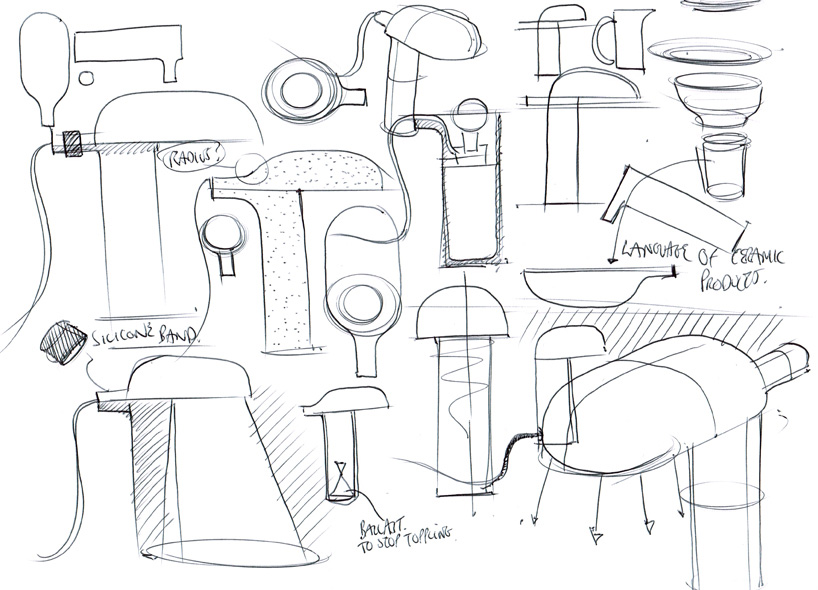 Sketches for the Container lamp

Describe your workspace: It's a studio space painted white, with white concrete floors and a very large desk in the middle that eight of us sit around. There's a workshop facility and shelves with prototypes and tests and experiments and sketches everywhere. And the walls are covered with various hanging samples and other bits of work.

What is the best part of your job? There's lots of good parts, so it's very difficult to say what's the best part. I think it's when you see people using your product. That's quite a nice moment.

What is the worst part of your job? It's a very long process, designing something, and you have to be prepared to go all in and dedicate enough time and energy for it. So that is the joy and the pain of being an industrial designer, that you're not doing things that are super immediate—things take years. 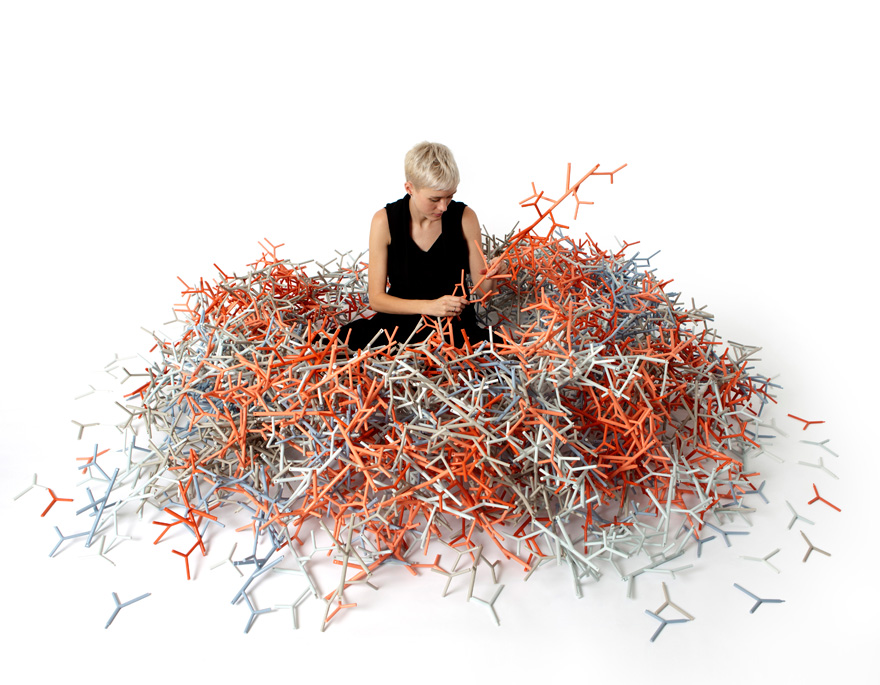 Amass is a system of recyclable plastic modules, developed as a more sustainable option for exhibition design. 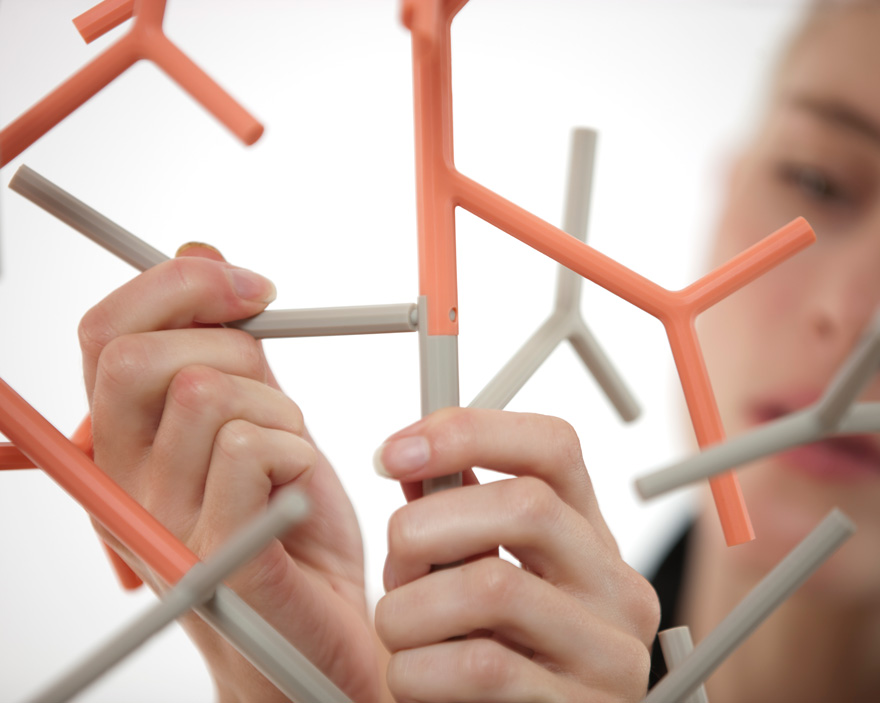 The product comprises three components that can be assembled into straight and right-angle walls. 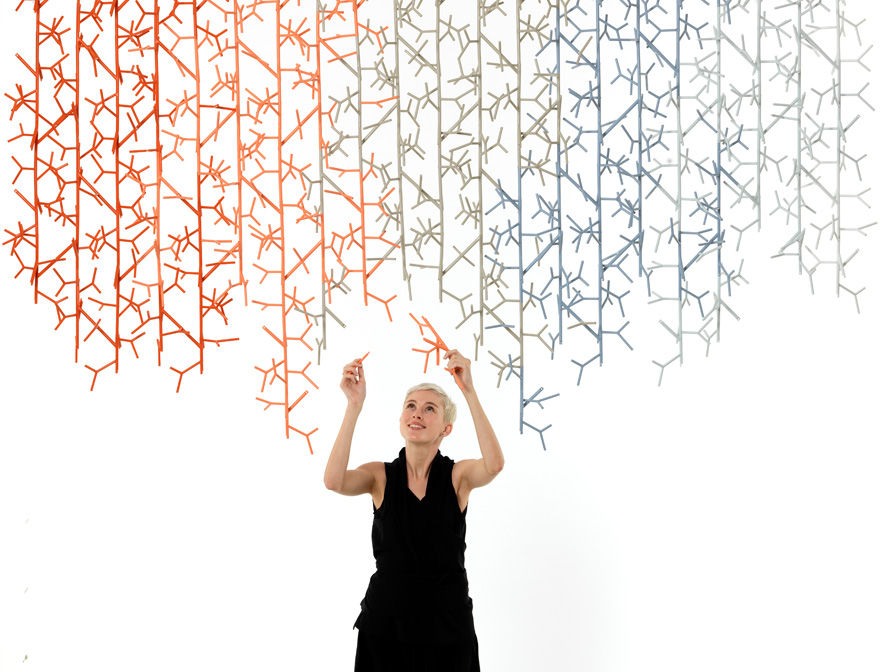 What is the most important quality in a designer? Determination

What is the most widespread misunderstanding about design or designers? Design isn't glamorous. I think the reason why there are websites like Core77 and everything else is because people think it's a glamorous industry for one reason or another. But that's a huge myth. When you talk to any designer about that side of the industry versus the work put in—you know, you have to put a huge amount of work in, and then you maybe spend five days a year that are nice, celebratory moments. 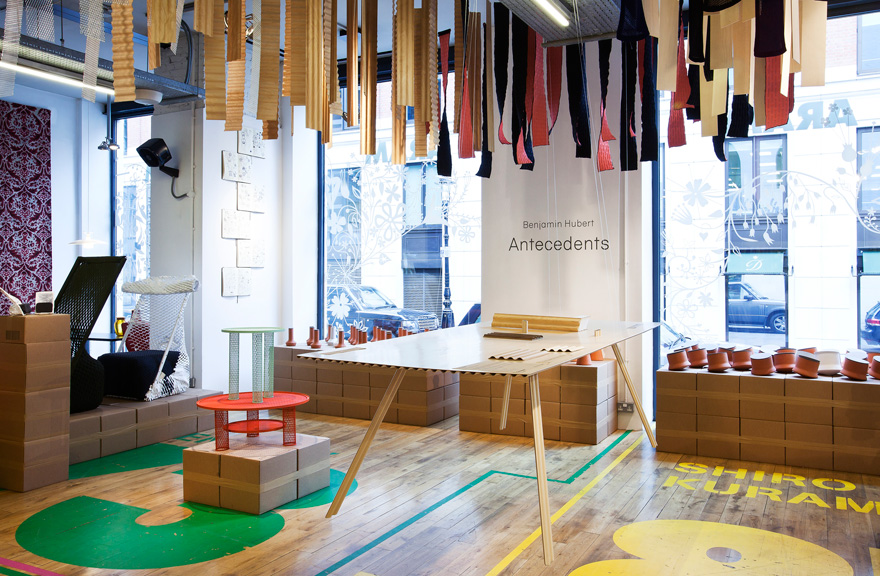 During the London Design Festival, the exhibition Benjamin Hubert: Antecedents showcased a selection of new products and prototypes from the studio. 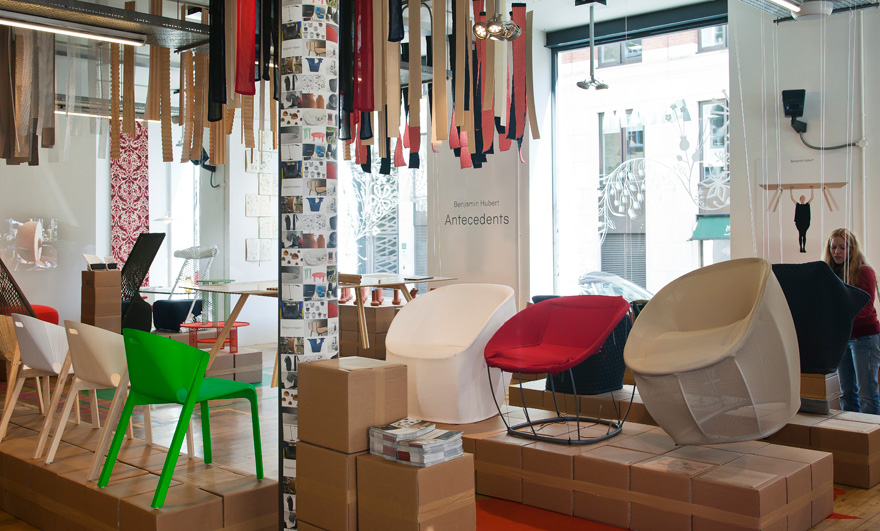 What is your most prized design possession? I carry a Moleskine with me at all times. That changes every two weeks, but having a sketchbook is the most important thing to me.

What is exciting you in design right now? The way people are changing the way they live. The pressures of things like globalization and smaller dwellings and travel—all of these things create new issues and new problems to solve. And that's what a designer's job is, to help the world move forward.

If you could redesign anything, what would you choose? Transatlantic travel. I don't know whether it's redesign exactly, but it would be nice to travel around in shorter amounts of time. Whatever that solution is.

What do you hope to be doing in ten years? Be designing things that work and are worthwhile and necessary

Lastly, who's more fun to have a drink with: architects, industrial designers, or graphic designers? None of the above. Most of my friends fall outside of that. I think it's nice to escape sometimes.

Benjamin Hubert on Carrying a Notebook, Taking Productive Breaks, and Why Design Is Not a Glamorous Profession