Editor: Where we last left off, "Family Man" was in the middle of an important salary negosh. But with a wife and two kids to support, money is just the first hurdle he needs to clear. Can he get the clan to the other side of the country?

"I can't do it for less than eighty," I said. That was exactly double my salary back home. Less than what my wife and I made together, but the cost of living out here was slightly lower.

He leaned back in his chair and laced his fingers behind his head.

Before I knew it we were both standing and shaking hands across his desk. But I told him I couldn't finalize yet, that I still had to sort some things out. See, if I was a single guy, it would have been a done deal right then and there; but my name in this story is Family Man, and there's a reason for that. The money Liberace Batcopters was offering was great, but now I just had to make sure I could provide a good home for my family.

When I told Batcopter Boss what I needed to do next, he said he'd ordinarily accompany me, but that he had to finish up some things. So he opened a desk drawer, pulled out a set of keys, and tossed them to me. At first I thought they were the keys to his Audi, but I was wrong; he led me around the side of the building to where there was a freestanding garage. He punched a code into a keypad, the door slid open, and inside was a shiny, cherry-red, jacked up Ford F-150 with a Batcopter logo on the side. "Company car," he explained. "Try not to scratch it." 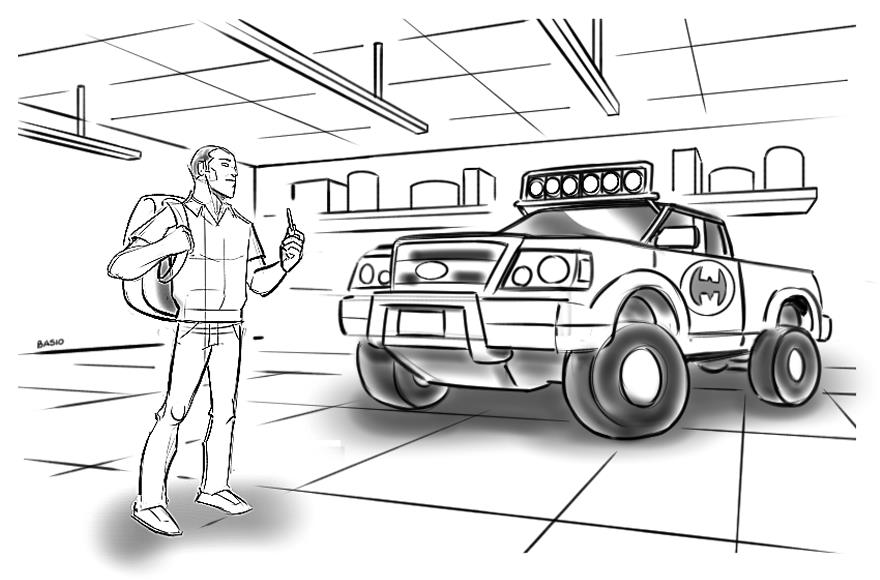 This thing was sweet! It even had GPS, which back in those days was not very common. I punched in the realty office I was headed to, and took off down the mountain. My wife and I had done a little preliminary research and there were two school districts in the area, one good, one better. My job was to check out the houses that would put our kids in the better school district.

I linked up with the realtor and she brought me to a quiet little community set a decent ways back from the main road. It was tough to tell how large the houses were from a distance, but they seemed pretty impressive, and I really liked how far apart they were from each other; back in [Hot Weather City] we were practically living on top of the neighbors, which neither my wife nor I liked. We wanted to live somewhere where you didn't know what the neighbors were watching on TV that night.

The model house just floored me. Back home we were in a 1,400-square-foot house that we got for $160,000; this place was 3,100-square-feet and came in at $210,000. It wasn't that much more money, and the place was much nicer: All granite countertops, plenty of exposed wood, huge rooms, plenty of storage space, open-plan ground floor, three-car garage. 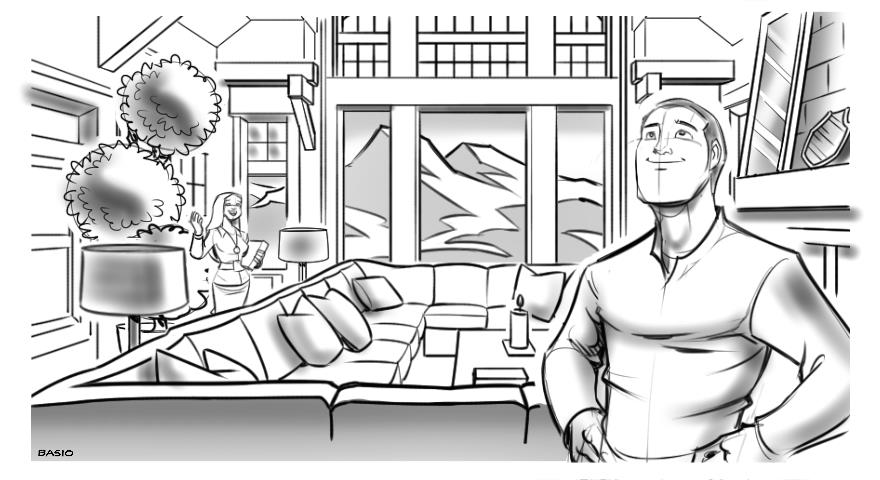 That sealed the deal, at least for me. I took plenty of pictures, and when I got back to the sweet hotel that Batcopter Boss had put me up in, I emailed them to the missus and we got on the phone. She was sold, too.

Back at my old job the next week, I had a contract from Liberace Batcopters in my bag, signed and ready to go. Now I had to take care of the little matter of quitting. I wasn't worried about telling the boss, because I didn't have one; he'd quit earlier in the month because this company was going down the drain.

But I had to break the news to Rick, my buddy and co-worker. I took him out to lunch, and when I told him he was visibly shocked. Where we worked was not a pleasant place, and he and I were the only things that kept each other sane in that hellhole. He took a moment to recover, then said, sincerely, that he was happy for me. I felt kind of bad, like I was leaving him behind, but he had a family too and he understood.

To officially quit I had to talk to my ex-boss' boss, a person I'd had almost no contact with. But he knew I'd designed [famous product] and was an integral part of the design group. He offered me a five thousand dollar raise to stay. I didn't say it out loud but I was like, Are you kidding me? Batcopter Boss had already given me a five thousand dollar raise, on top of double my current salary.

I actually stayed on for another four weeks. My wife and I had to sell the old house and close on the new one. I didn't mind the delay because it meant I'd get to help Rick wrap up some projects.

Finally the day came. We'd sold the house in 19 days, closed on the new one and were ready to go. Rick came by with his oldest son to help us load the U-Haul. I promised him I'd find where the good hunting was in [Cold Weather State] and that they'd have to come out for a trip. It was tough watching the boys say goodbye. 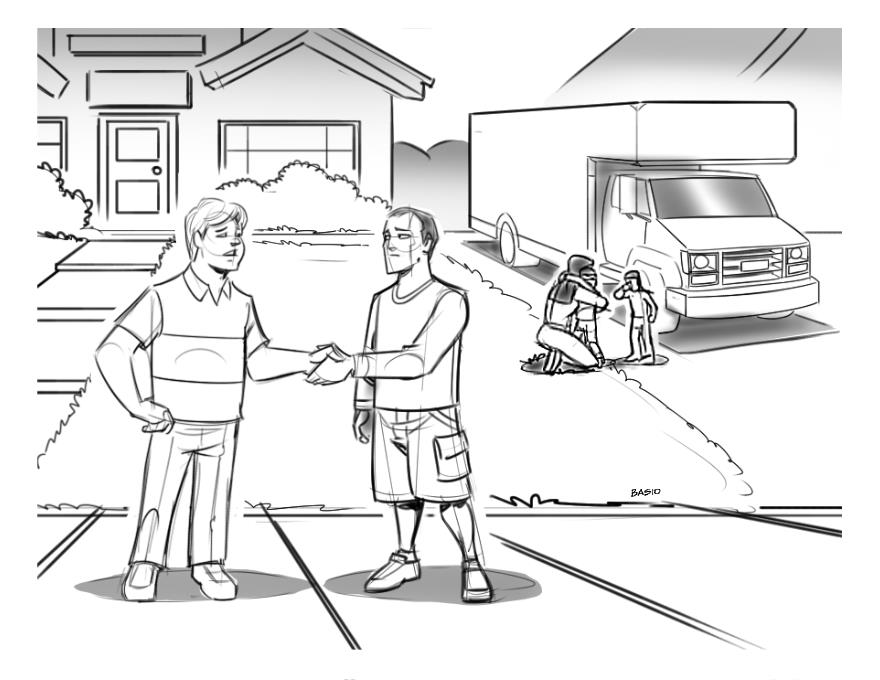 That cross-country drive was hell, man. My youngest was sick so we had to stop like every two hours. We naively thought the drive would take us two days, with me and the missus switching off at the wheel; instead it took us three and a half. But as hellish as it was, I was excited for us to be starting this new chapter in our lives, and thrilled that we we'd be able to change our boys' childhoods with a superior setting. 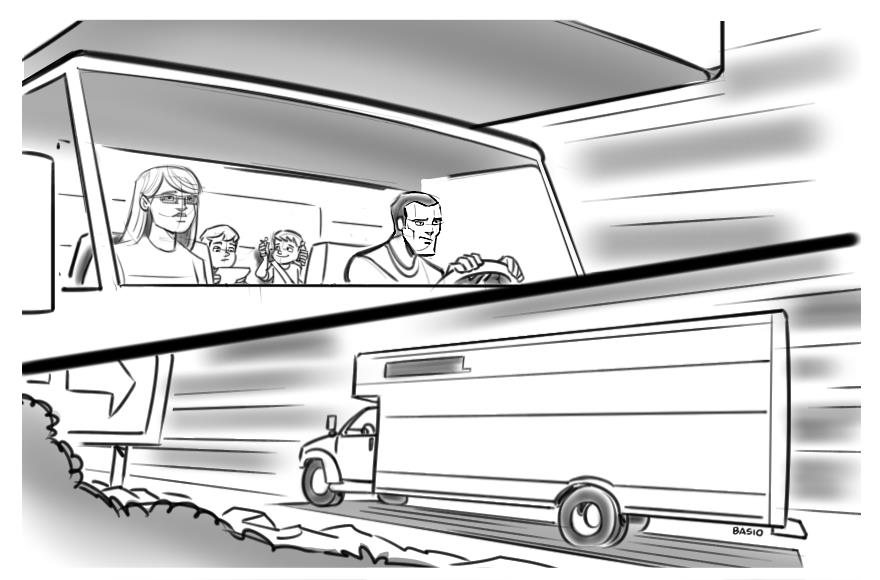 We'd left nothing behind. Everything we owned was in that truck, all of our stuff, every last one of our belongings. Down between the front seats was my bag, and inside was my copy of the signed contract with my new employer, Liberace Batcopters, Inc.

I was sure that I'd read that contract very carefully.