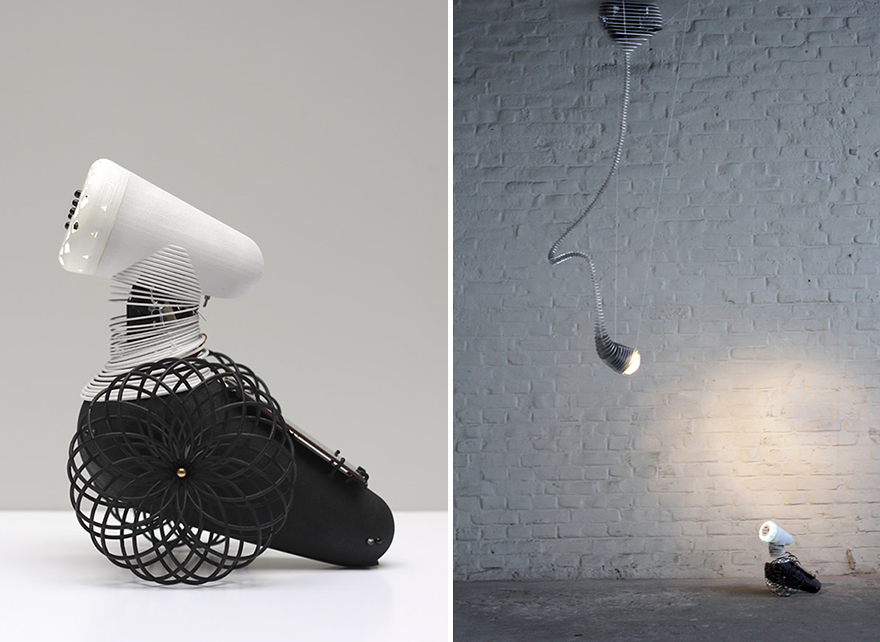 Spend any amount of time sitting at a workbench, as I do in my machine-fixing hobby, and your issue is always getting light to the right spot. I spend almost as much time fiddling with the swing-arm lamp as I do manipulating tools. I've thought about getting a headlamp, but suspect it won't solve the issue, although it will make me look like more of a dork.

[The] two lights...act and react like autonomous creatures. Wallace responds to changes in light intensity in its environment and brings light to the darkest corners. Having done that, it's no longer the darkest space, so he moves on, constantly bringing light where it is darkest. Meanwhile solar-powered 'Darwin' searches for sunlight during daylight hours to charge his battery, and in the evening wanders around the house seeking movement - accompanying people with his light. The interaction and emotional relationship they bring contribute to our well being. They behave like pets. They are lively lights you can play with.

I'm less interested in playing with them than having them serve me, but that's because I am prejudiced against robots. De Graaf, for his part, is not: "I am a big fan of Wall-E, I think Pixar did a really great job in showing how a robot can be adorable," he said in an interview with UK-based We Heart. Not that the Pixar flick, or the hopping Angelpoise lamp, was his inspiration: "My inspiration comes mainly from nature. In nature everything moves all the time, some things really quickly, others really slowly, but nothing has a fixed form or place. That's why I think it's really interesting to work with movement, instead of denying it and working with fixed forms."