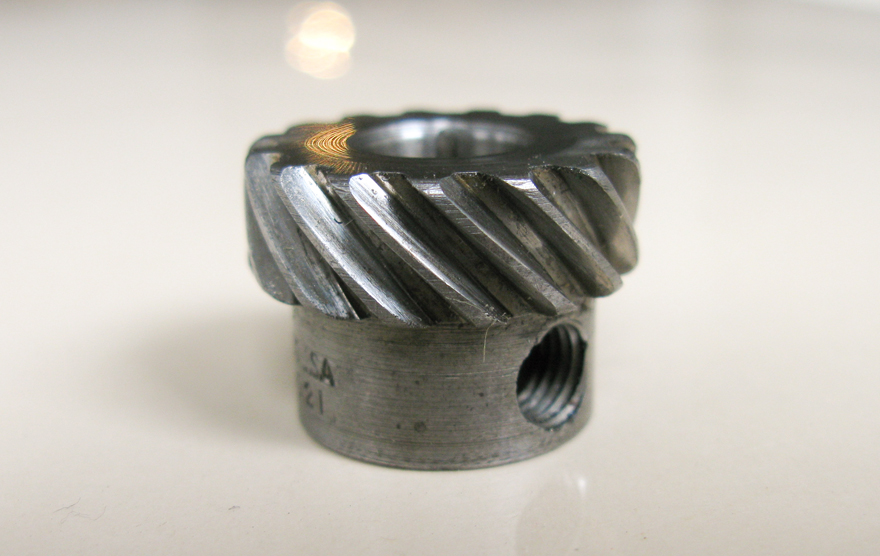 That's the hook gear for a Singer 111w155, an industrial sewing machine much-beloved by (and cloned for) those who produce upholstery and heavy-duty sewn goods. It was originally produced in the 1950s and virtually built to last forever, so a well-tuned machine like this will run you over $500. I bought mine for $5, because that hook gear was worn out; the owner deemed it junk and was planning to give it to a scrap metal guy.

That a useful 100-lb. machine could be rendered worthless for want of a part that weighs 0.875 ounces is an absurd but common reality. And never mind sewing machines: How many vintage motorcycles, vehicles, power tools and industrial machines suffer the same fate from stripped or worn parts that are no longer produced? To 3D print that hook gear, which must mate precisely with another gear on the shaft, would require a complicated 3D file. But GE's emerging "cold spray" technology can offer a second lease on life for machines by digitally repairing worn parts rather than fabricating them whole.

Developed at the GE Research Center's Coating and Surface Technologies Lab, cold spraying, an additive technology, is more akin to painting than 3D printing. Metal powders are sprayed onto a worn part at high speeds to build elements of that part back up. GE is mum on the formula, the surface prep required and the precision with which the material can be deposited, but they refer to the nascent technology as "a potential 'fountain of youth' for metal."

They've also mentioned that cold spray can be used to create parts from scratch, but again, have not elaborated on how that can be done. And the technology's killer app is thought to be large structures, where it is more practical to repair on-site rather than disassemble and replace.Anteneh Kebbede, Manager of the Coating and Surface Technologies Lab at the GE Research Center said, "In addition to being able to build new parts without welding or machining, what's particularly exciting about cold spray as an innovative, 3D process is that it affords us the opportunity to restore parts using materials that blend in and mirror the properties of the original part itself. This extends the lifespan of parts by years, or possibly by decades, ultimately providing improved customer value."

Spray technologies are particularly attractive for the production of large structures, which are challenging for today's powder-bed additive manufacturing processes due to equipment size limitations. The cold spray technique has the potential to scale up to build larger parts, with the only limitation being the size of the area over which metal powders can be applied.

Cold spray—also known as 3D painting—demonstrates a unique marriage of materials, process, and product function which can, in the immediate future, transform repair processes for industrial and aircraft components such as rotors, blades, shafts, propellers, and gear boxes. Since cold spray does not require heat, like common repair processes such as welding, it allows a repaired part to be restored close to its original condition. In GE's Oil and Gas business, GE researchers are exploring cold spray as an alternate way to repair or coat parts involved in oil and gas drilling and turbo machinery.

The demo video GE's just released is a bit underwhelming, but it doesn't take much imagination to understand the potential benefits.