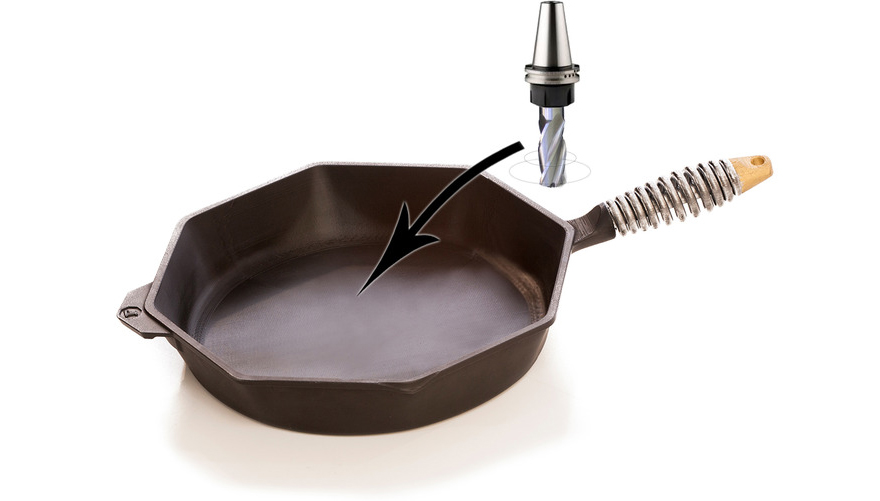 As an industrial designer, which would you rather do: Design brand new objects and interfaces that have never existed before, or design improvements into existing objects? Both have their challenges, but I for one love seeing folks tweak longstanding, everyday designs to improve their functionality.

The latest Kickstarter smash success falls into this latter category. Portland-based Mike Whitehead is a product designer who loves to cook, but after years of using a common cast-iron skillet, he realized it was "long overdue" for a re-design.

First off, the handle of a cast-iron skillet is essentially a design fail that people are willing to live with. The standard handle is tiny and loop-like, the faster to dissipate heat, yet you still need an oven mitt to handle the thing, so you get the worst of both worlds: An uncomfortable, unergonomic handle that can burn you.

Secondly, the finish of a cast-iron skillet's cooking surface wears its production method on its sleeve: The rough texture screams sand casting. This makes it tough to clean.

Thirdly, a skillet's circular shape distributes heat evenly, but does not lend itself well to pouring out the sauces you've been simmering.

Let's take a look at how Whitehead, with the help of industrial designer David Lewin and 3D modeler Kip Buck, solved these problems with their Finex design:

At press time the Finex had blown way past its $25,000 target with over $150,000 in funding. There are still three days left to get in on it and the first units will ship on December 15th, just in time for the holidays.

By the bye, the Finex logo was designed by Aaron Draplin of Field Notes fame.

Hit the jump for some bonus manufacturing footage: How they prototyped the handle, and a look at the sweet 5-axis CNC mill cutting the mold.