Driving, as we all know, requires complete and total attention. When operating a complex machine shuttling along at 60 miles per hour, it's not only necessary for the driver to be totally and fully alert, but it's also necessary for public safety. According to one articled posted on New York State's SafeNY site, "The state of drowsiness itself is a significant impairment while driving and has been shown in several studies to be as dangerous as driving drunk. In driving performance testing, 17 hours of sustained wakefulness was equivalent to driving with a blood alcohol content of 0.05%."

But drowsiness is just one of many issues that can affect driving. The ignition interlock device is designed for drunk driving, but what about everything else? A baby crying in the backseat. A chatty seatmate. A funny joke on the radio. A ringing phone (even if you don't stop to pick it up). In most of our lives these days, we live with plenty of distractions, and those distractions don't go away when we start driving

An article in Wired pointed me to a new system that's intended to deal with these distractions: the Attention Powered Car. A collaboration between the EEG company Emotiv and Western Australia's Royal Automobile Club, the car slows down when it detects distraction."We know inattention is a problem," says one of the interviewees in the video. "We just don't know enough about it." And it's a thorny issue: anyone's who driven on a busy freeway knows that being able to flit your mind around to different parts of the road is critical. You have to be able to see to your left and right, front and back, while maintaining a steady speed. Doesn't that count as distraction too? 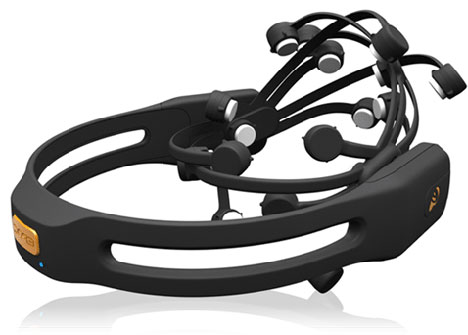 The researchers looked for changes in how the subjects processed information, which allowed them to get a picture for what normal driving looks like as well as detect attention switching between different tasks. Most interesting is the fact that Mackellar could tell when a driver was about to be distracted. The headset and machine learning were about to be distracted even before you grabbed your phone to send a text.

It's easy to imagine applications for this kind of research, both in driving and in other tasks that require high levels of attention, like operating heavy machinery or conducting surgery. And while the EPOC is hardly a practical device to be wearing all the time, it's a lot more comfortable than a more complex EEG setup.