Anyone who has ever visited the Taj Mahal in Agra, India, would probably agree that it is one of the most fascinating buildings that he or she has ever been in the presence of. Even in pictures, one can sense the almost magical aura of this massive marble memorial, which appears as though it is floating. If it has a breathtaking effect from afar, it becomes truly mind-blowing when having a closer look—when one can see that all the delicate patterns that cover the huge marble blocks are actually stone inlays.

On a recent trip to India, I had the chance to learn how these stone inlays are made. They are in fact still done in exactly the same way that they used to be done in 1633, when the 17-year construction of the Taj Mahal began—except that the craft is applied to souvenirs rather than mausoleums these days.

The Taj Mahal was built by the great Mughul emperor Shajahan, in memory of his wife Mumtaz, who died giving birth to her 14th child. To create it, the most skilled architects, inlay craftsmen, calligraphers, stone-carvers and masons were called from all across India and lands as distant as Persia and Turkey. It is said that the most skilled individuals who had worked on the Taj Mahal had one hand cut off after it was finished so they could never duplicate this work again. 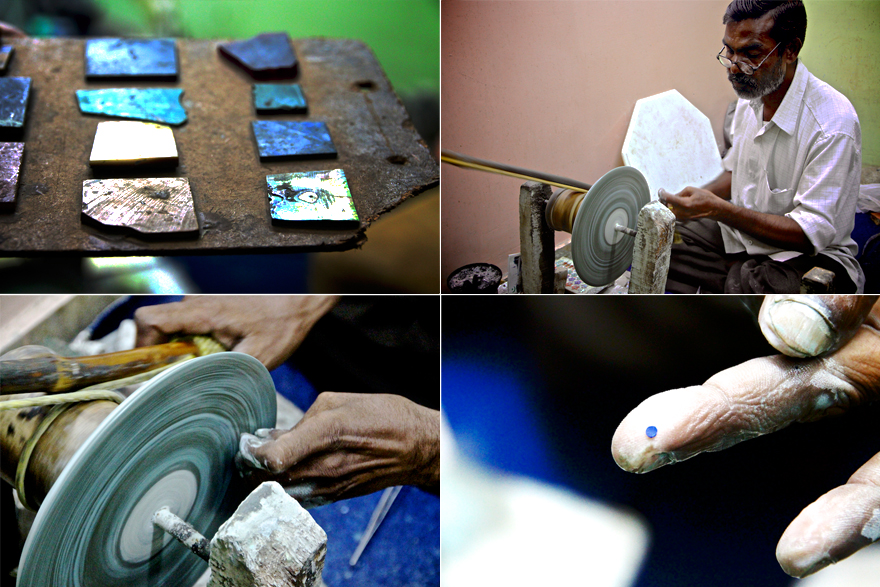 Fortunately, the artisans were still able to pass on their skills to future generations (although only to the men and only within the family), and, 14 generations down the line, I had the pleasure to meet some of their descendants, who demonstrated how these stone inlays—pietra dura or parchin kari—are made. The artisans work together as a cooperative, meaning each of them remains an individual artist with complete creative freedom, but all profits are shared equally.

The starting point are thin sheets of various (semiprecious) stone, from which the artisan creates delicate shapes, some only a few millimetres in size, like the little dot in the picture above. Only a (human-powered) grindstone is used, and the craftsman will inevitably also abrade the skin on his fingers during this process.

Each shape is ground individually and must fit precisely without any gaps. Once a perfect fit has been achieved, the marble plate, into which the ornamental pattern will be integrated, is covered with a layer of henna paint. 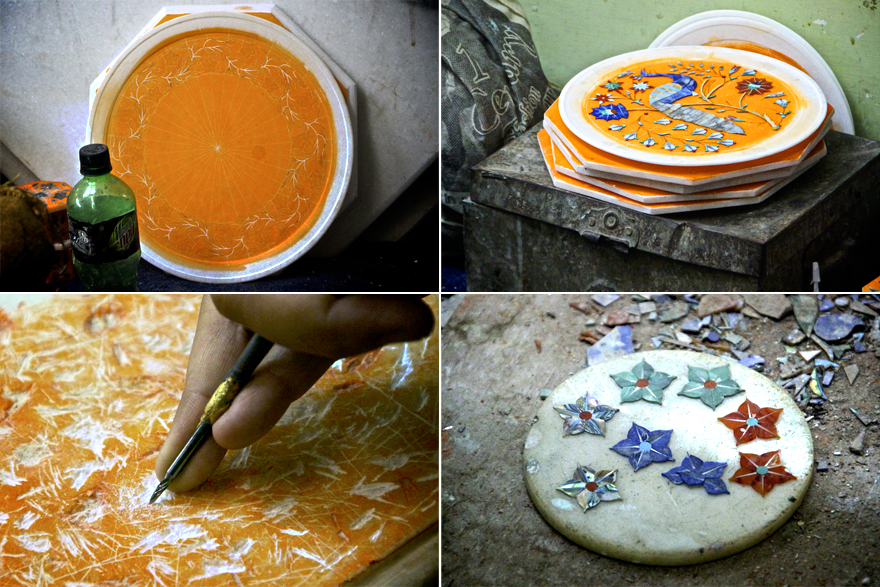 The single pieces that make the inlay pattern are laid out on the marble plate and their outlines scratched into the surface. The orange color serves as an orientation when carving out the individual grooves, into which the semiprecious stone pieces will be glued.

Not much has changed in the 363 years since the completion of the Taj Mahal: the glue in use is still a paste made from sugar cane, bees wax, honey, lemon juice, marble dust and lentils. A grind stone shard is used to smoothen the surface after the inlays have been inserted.

The henna paint is also removed during this smoothening process. The inlay piece is now properly integrated into the marble plate, and gets a final finish with a layer of wax. 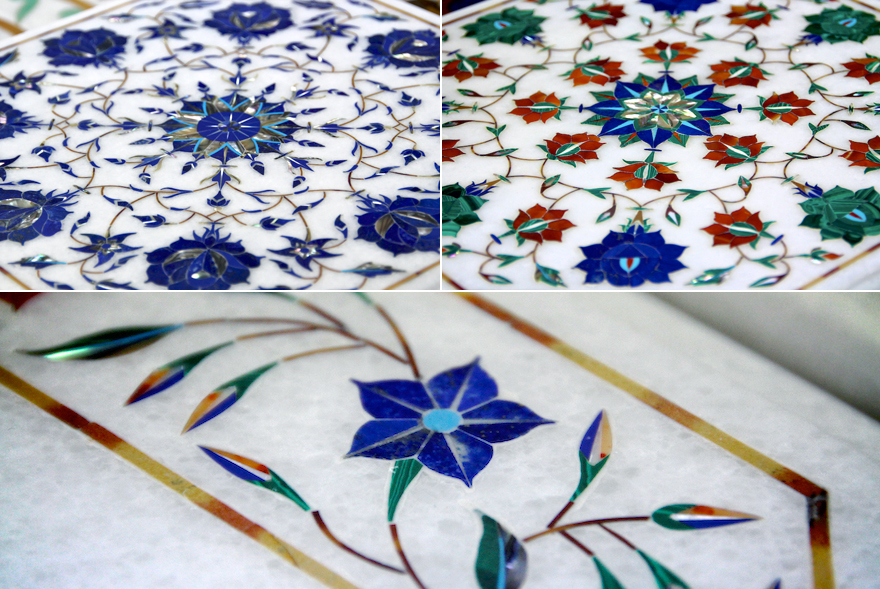 The more skilled the artisan, the more precise and detailed the ornaments he creates. For labor intensive pieces like this, which take several weeks to make), the price can easily reach several hundred dollars.

Unique for its translucency, marble from the Makrana region in northwestern India was used to build the Taj Mahal, as well as many other famous buildings such as the White House, St. Pauls Cathedral and Sydney Opera House, to name a few. Here a demonstration with a torch light shining through the Makrana plate from behind. 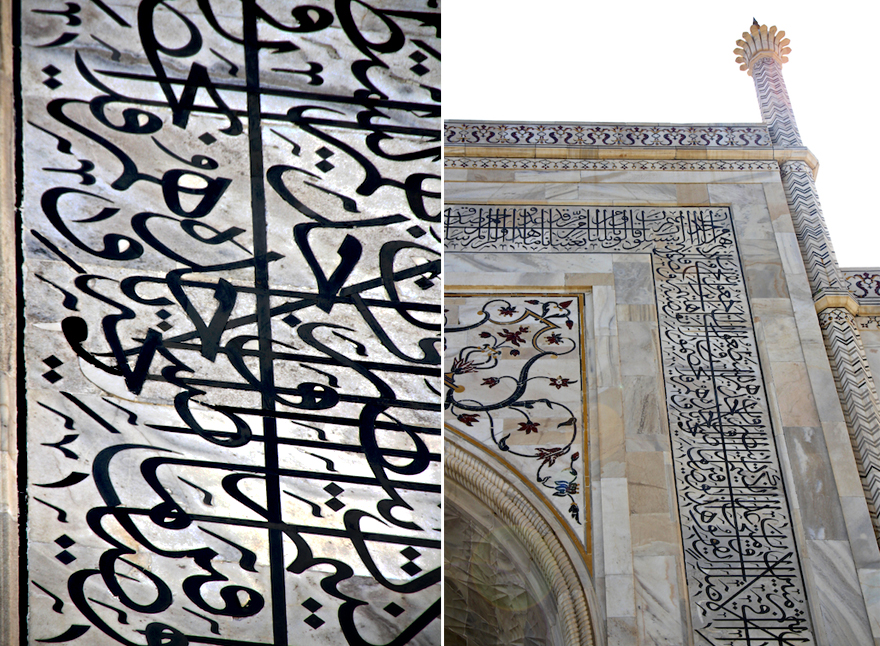 These inlays are only a small part of a total of 26 Koran chapters, which are applied to the Taj Mahal. The stone used for the black arabic script is onyx. 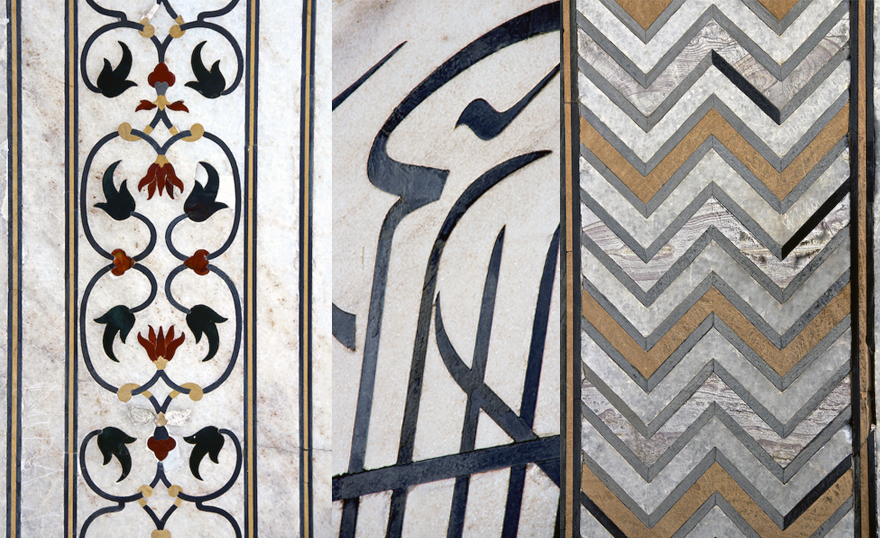 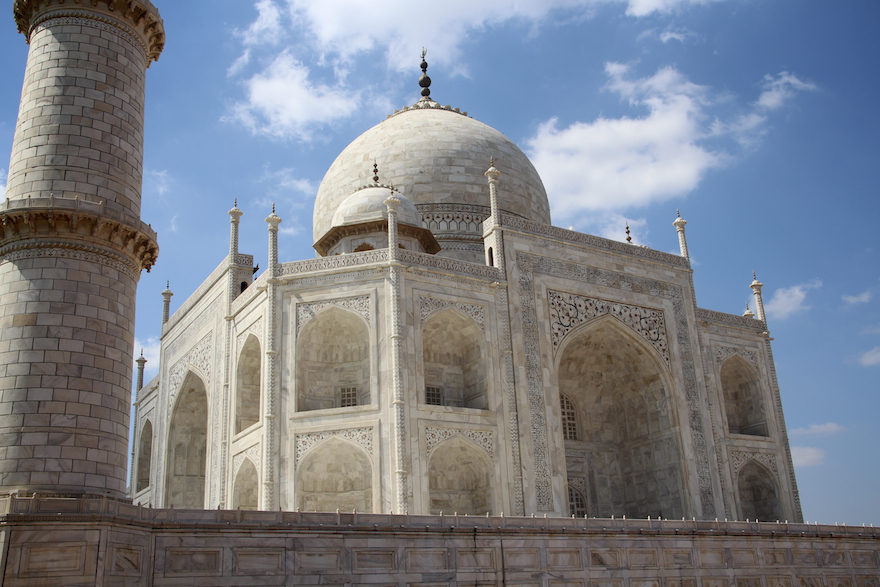