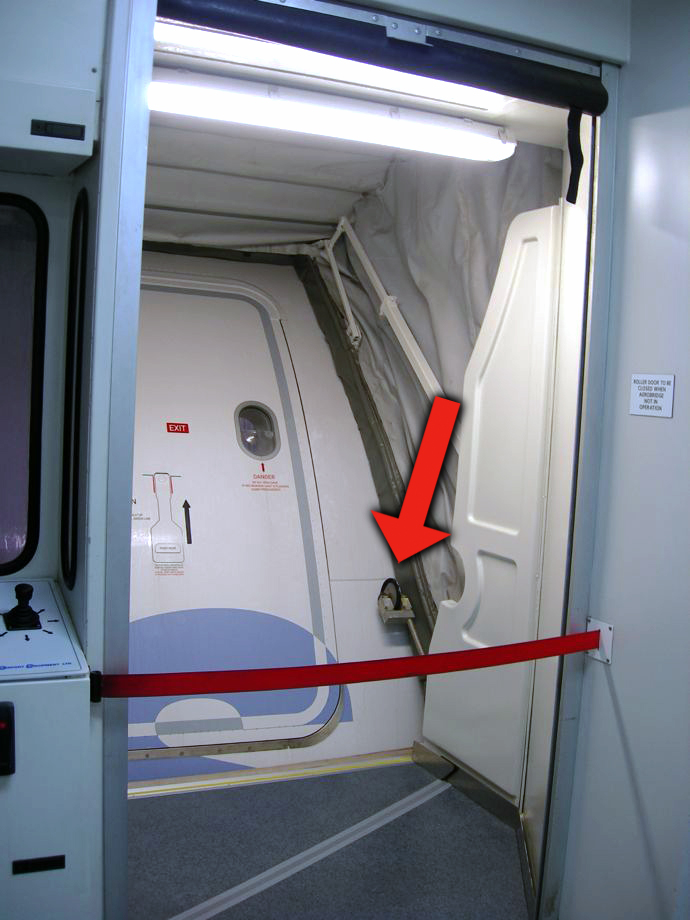 Your correspondent managed to travel via subway this Thanksgiving, avoiding the car-clogged roads, the train-jammed tracks and most importantly, the airplane-choked skies. But this past weekend, I departed for Autodesk University on the other side of the country, meaning there's a plane ride in my immediate future.

On the jet bridge, I'll be looking out for that little wheeled thing in the photograph above, which I've not noticed (so much for being an observant industrial designer) on the numerous flights I've taken in my lifetime, probably because during the boarding process I'm more concerned with if there's any overhead bin space left. Slate, however, has been kind enough to point the object out and explain its function. Can any of you guess what it is, and what it does?While Slate used an Airbus A380 for their example, I'll be flying out on a Boeing 737-800, so I dug up some stats to do a little math. First off, that little wheel is attached to a sensor that judges the actual level of the plane relative to the jet bridge, which changes as the plane goes from laden to unladen, and vice versa.

Why? Because unladen, the 737-800 can weigh 80,000 to 90,000 pounds, depending on the configuration. The capacity maxes out around 210 people (or 210 "souls," if we crash; for some reason, whenever an air or sea vessel goes down, they always say "X number of souls were lost on [vessel] #213 out of New York." But I digress). Let's say we Americans have an average weight of 180 pounds—ha, ha, ha!—and that we've all maxed out our 40-pound carry-on allowance. Throw in the pilot, co-pilot and crew, and that means that once we've all packed our fat asses and gear onto that baby, we're looking at a plane that's had nearly 50,000 pounds added to it during the fifteen minutes it takes to board. And that's not counting whatever amount of fuel they're pumping into the thing, and the weight of the delicious, nutritious meals being loaded into the galley, and our checked luggage going into the belly.

During that time, the jet bridge needs to stay level with the entrance of the plane, and that's what the wheel is for; as the wheel travels, detecting if the plane has sunk (or raised, during de-planing), motors kick in and automatically raise or lower the jet bridge to match, so that we don't have a bunch of travelers tripping all over themselves and figuring out how much they can sue the airline for.

The little wheel and its attendant system, by the way, have a clever name: It's called "autolevel."