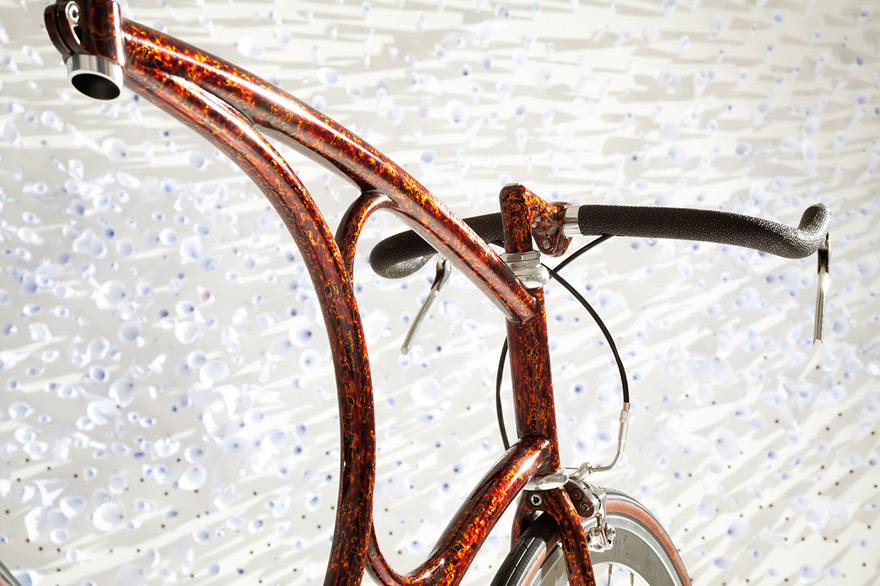 Last few weeks ago, a Cinelli "Laser Nostra" prototype sold for nearly 2.5 times its high estimate of $20,000 at a charity auction, raising $47,500 for (RED)—a fraction of the $13.1m total, but certainly a handsome sum for a bicycle that reportedly won the 2011 Red Hook Crit in Milan. (The one-off red Mac Pro went for nearly a million bucks, grossly eclipsing its $40,000–60,000 estimate.) Of course, the hammer price with buyer's premium comes in at one-tenth the figure of the most expensive bicycle sold at auction, a Trek Madone adorned with custom Damien Hirst 'butterfly' graphics—real wings applied to the frame and wheels—raced by Lance Armstrong during the 2009 Tour de France (see the full ranking here). The lepidopterous lightweight sold, pre-doping scandal, at a 2009 charity auction for the controversial cyclist's Livestrong organization, bringing in (as Lance Tweeted) "Half a million bucks!!!"—far and away the most of any of the art bikes he raced on that year. 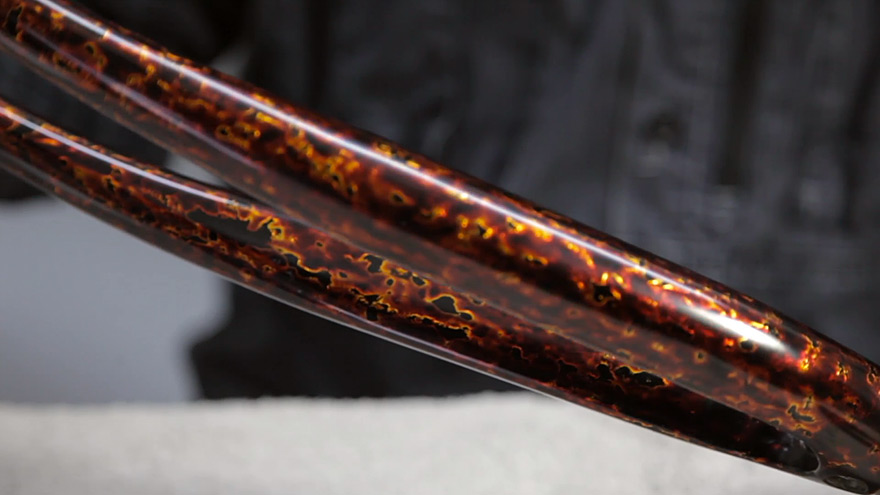 Now Sotheby's, the esteemed auction house behind both of these notable sales (Bono is the man halfway-but-not-really behind the curtain), has commissioned a kind of artist's edition of bicycles from Herman van Hulsteijn, whose elegant seat tube-less frame design we first admired a couple of years ago, shortly after he launched his eponymous bicycle brand (styled as Vanhulsteijn). The Dutch designer has outdone himself with his latest project, a collaboration with his neighbors in Arnhem, who specialize in the craft of lacquer, also known as urushi.

Urushi is the sap of the urushi or lacquer tree (rhus vernicifera). It is a member of the sumac family (anacardiaceae) and native to China, Korea, Japan and the eastern Himalayas. The sap of this tree contains a resin (urushiol) which, when exposed to moisture and air, polymerizes and becomes a very hard, durable, plastic-like substance. Urushi is in fact a natural plastic. The process of applying the lacquer is long and labour intensive: independent of the size of the surface it takes on average 6 months to carry out the finishing. In some cases 60 layers are applied and polished by hand. Depending on the kind of lacquer the time it takes a single layer to dry can take from two hours up to three months. Due to its fascinating characteristics which are both sustainable and aesthetically beautiful, urushi is still used for a wide variety of purposes.

Most of us have probably encountered Japanese or Chinese lacquerware at some point and might recognize its distinctive gloss; I didn't realize that the raw material is a toxic sap. Indeed, the rich, ten-millenia-plus history of urushi includes distinctions such as sacred-tree status and similar deference to urushi artists; it was used to rust-proof weapons as late as WWII.

In the 20th century a number of designers working in France began to use Asian lacquer for furniture and other decorative arts. Eileen Gray and Jean Dunand are two of the artists who produced screens, furniture and paintings using Asian lacquer. Today, while many craftspeople still make beautiful lacquer ware, urushi has become an important material in the art scene in Japan and other parts of Asia. Contemporary artists are increasingly working with urushi, its colors, shapes and techniques in their paintings, art objects and jewelry. 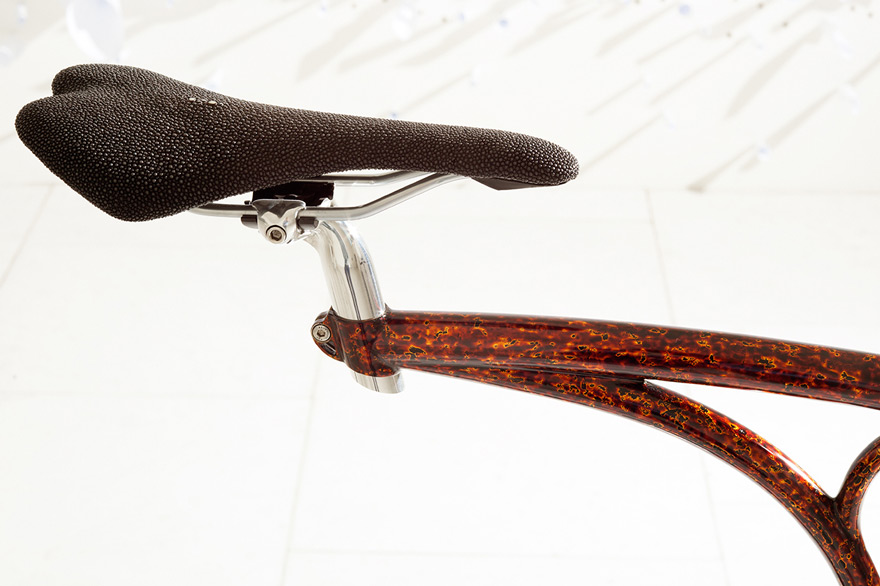 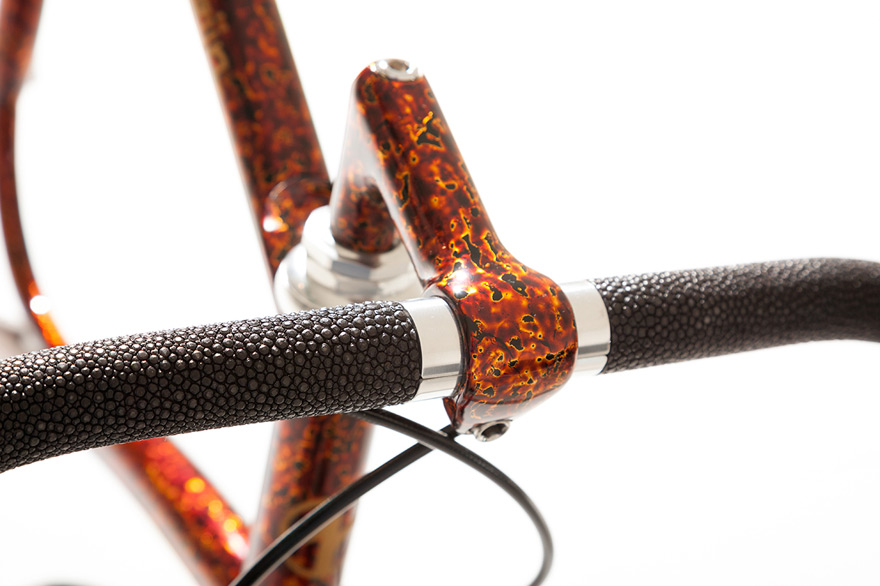 For those of you who care about these things, the components include H+Son rims laced to Paul track hubs, a Campy Pista drivetrain, and custom brake levers and calipers. I'm not a huge fan of the bespoke 'ray-skin' upholstery of the saddle and bar tape (well-worn Brooks & custom leather wrap would be perfect ATMO), but there's no denying that it's a looker—like Ralf Holleis's VRZ 2, the urushi project is a rideable work of art. Lacquer finish or not, I'm still curious to try a Vanhulsteijn myself... but the idea of the urushi treatment on, say, a classic 3rensho might just be bike perfection. 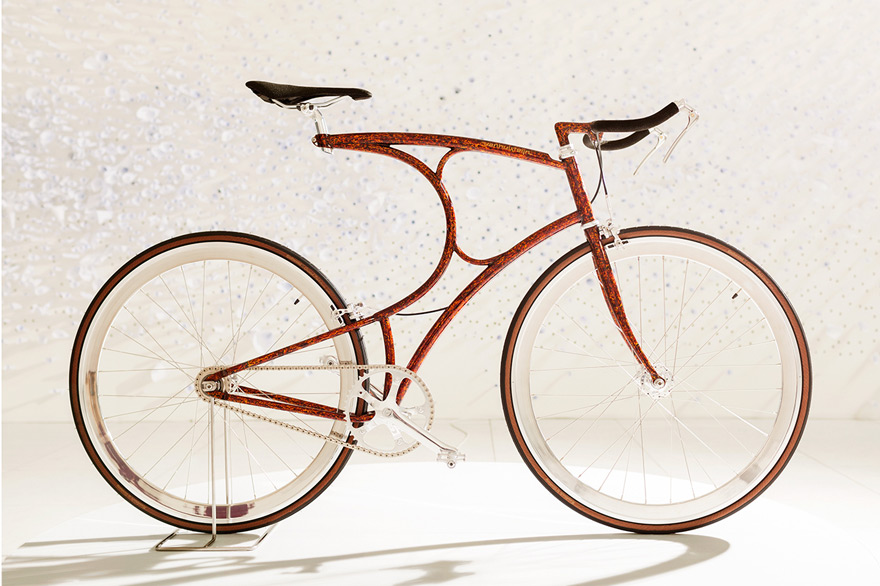 Which brings us back to the pricetag for owning the prestige: The highly limited edition of nine bicycles will be available exclusively through Sotheby's in five production sizes for €32,000 each, roughly $44,000 (as of press time)—just under that of the Jony & Marc-approved Laser. Not exactly your daily beater... unless, of course, you happen to own the Butterfly bike, in which case you can probably afford to buy a new bike for every ride instead of locking up (the rest of us will have to make do with Citi Bike).