Commute Culture May Have Just Peaked with this Passive Aggressive Fashion 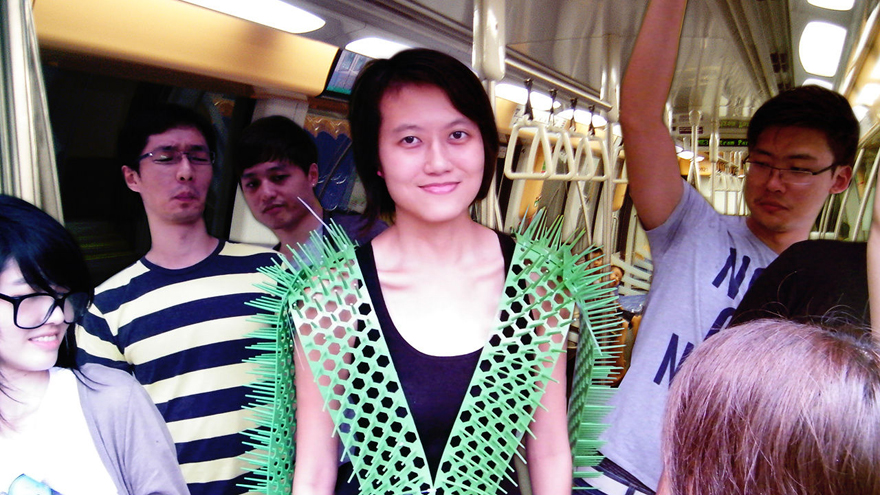 No one really likes commuting (except maybe those who have readily accepted "Tube Games" into their daily routine). We might temporarily curb our discontent with a few minutes buried in a good book, slowly head-bobbing to music or eyeing the cute straphanger across the train. It doesn't push past the fact that no one likes being crammed into a sweaty sardine can with a crowd of groggy people on their way to work.

If anyone has come even remotely close to making that scenario the least bit enjoyable, it's industrial designer Siew Ming Cheng. She's put together a commuter get-up that'll keep even the bravest of morning riders at bay. Just make sure you aren't on the receiving end.

Cheng's creation, "Spike Away," was the product of a two-day workshop at the National University of Singapore. Students were directed to come up with a "Chindõgu"—the Japanese art of designing gadgets to solve a mundane problem. Cheng decided to focus on maintaining your personal space during the crowded peak hours of the public transit system. Her question: "What would happen if I wore a vest of spikes?"

Students were given half a day to find their chosen materials and put together a working prototype. Cheng's design features a handy store find: strips of spiky, flexible plastic she found in the gardening section, which is intended to keep pets away from plants.

I can imagine the reactions now: Babies on their way to daycare being pulled in closer to their parents, curious toddlers poking and prodding the vest, commuters actually paying attention to where they're slinging their work totes—and a potential disaster for rogue earbud cords. All in all, from a seat far away this could just make the morning commute a much more entertaining place.

What do you think—do any of you have a quirky solution to the self-centered commuter crowds on public transit?