In the Details: Converting the Sleeping Bag into an Everyday Household Blanket 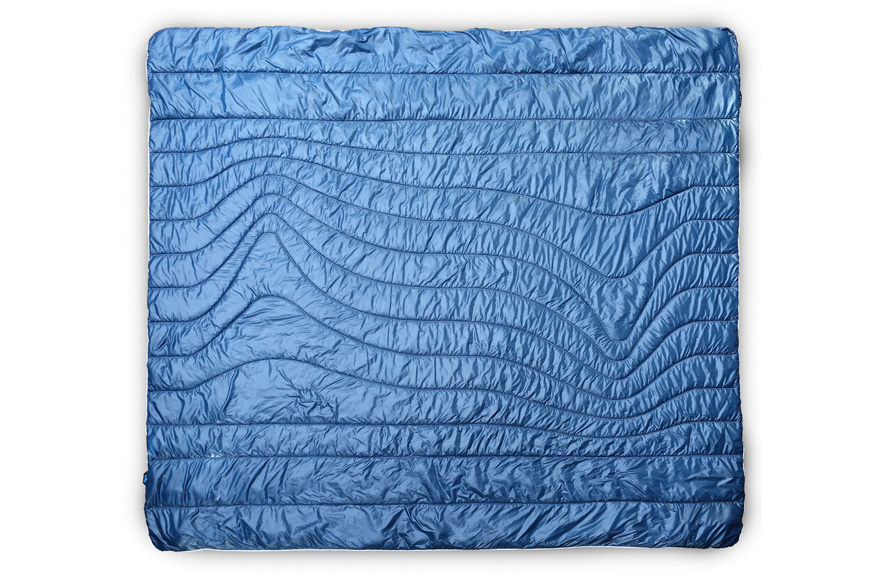 Early this year, on a surf-and-ski trip gone awry, the San Franciso–based designers Wylie Robinson and Nick Polinko found themselves stranded in their car overnight in sub-zero temperatures. Luckily, they had sleeping bags, which not only kept them warm until they could get their car towed but gave them an idea for a new product—a high-performance blanket for the home that they dubbed the Rumpl and launched on Kickstarter this month.

"We felt that the soft, warm, durable materials used in our bags had the potential for many uses other than camping or super-technical apparel," Polinko says. "We realized the everyday blanket was severely lacking a modern update, and the boring style options at local home supply mega-stores were dull and repetitive." Looking at the options available, they noticed that everything seemed to be made for either college students or Martha Stewart. With a shared spite for dealing with clumsy duvet covers and an affinity for the feel of technical materials, the two knew they could develop something better. "We set out to solve a problem that we had, and found out that lots of other people felt the same way," Robinson says.

But realizing their vision was hardly a straightforward task. Robinson and Polinko knew exactly what kind of material they wanted—a durable, water-resistant coated nylon like the kind found in high-end jackets and sleeping bags. Their first step was to source the material in bulk, a surprisingly challenging task. With backgrounds in product design and graphic/environmental design, respectively, Polinko and Robinson had a lot of experience building new products from scratch, but never in the soft-goods department. To fill that gap, they brought in an apparel designer. 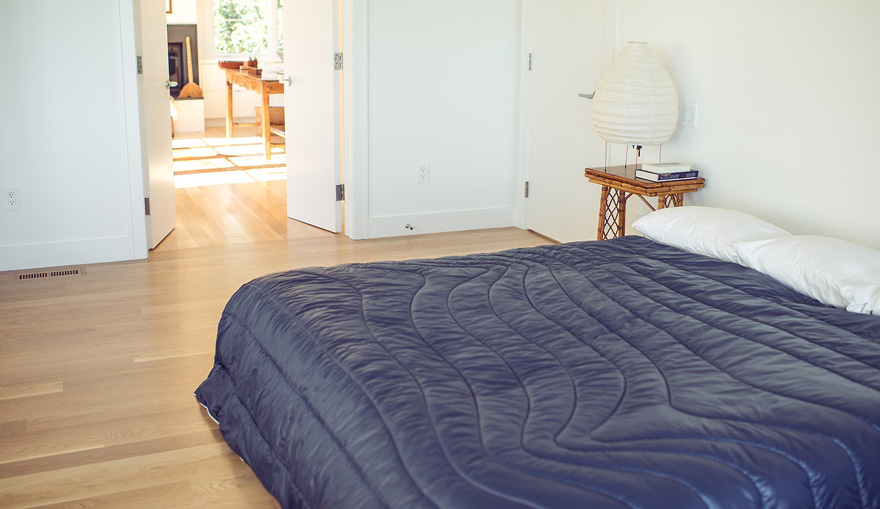 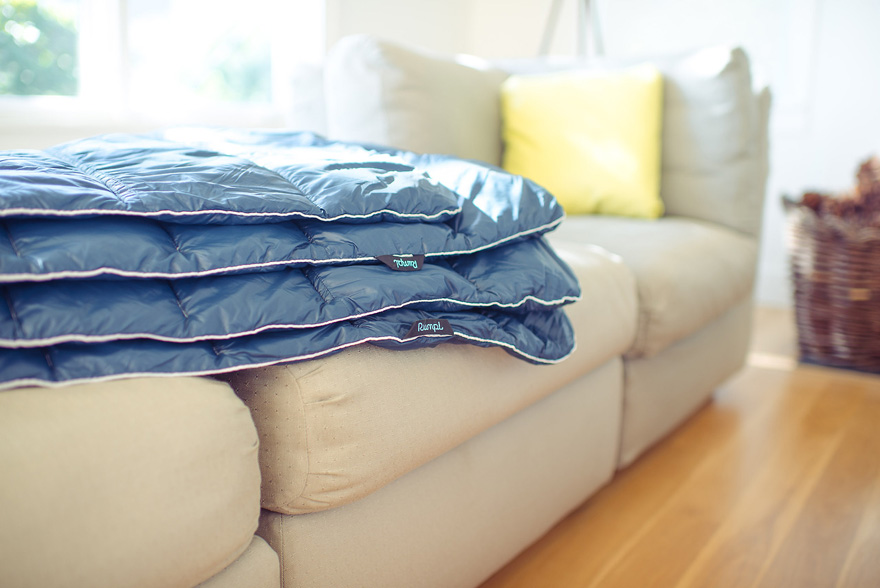 "Local fabric stores did not carry premium material, and the few places that sell it online have it marked up 300 percent from the bulk rate," Robinson says. He and Polinko quickly learned that most outdoor brands actually re-brand material with their own names while another company produces it for them. "We almost thought we were dead in the water until we finally lifted the veil on the soft goods industry through some very helpful contacts," Robinson says. "We got plugged into fabric sources that the 'big guys' in the outdoor industry use, and were able to get exactly what we needed down to the look and finish."

But even after they found the exact material they wanted, the Rumpl team struggled to schedule meetings with manufacturers, due to their small size and the limited run they were looking to do. After finally securing a meeting, they were presented with hundreds of nylon samples that, to an untrained eye, looked nearly identical. This necessitated another steep learning curve—the Rumpl team had to quickly educate themselves in the art of judging fabrics and understanding the tradeoffs between different varieties.

Once that hurdle was overcome, they had to find a factory to manufacture the final product. The nylon didn't make this process any easier, as its light and smooth features make the material extremely difficult to work with. Factories that specialized in working with nylon for outdoor products lacked machinery large enough to produce something scaled for king- and queen-size beds. Traditional duvet and bedding manufacturers, on the other hand, were hesitant to work with an unfamiliar material, let alone a small, un-established company. 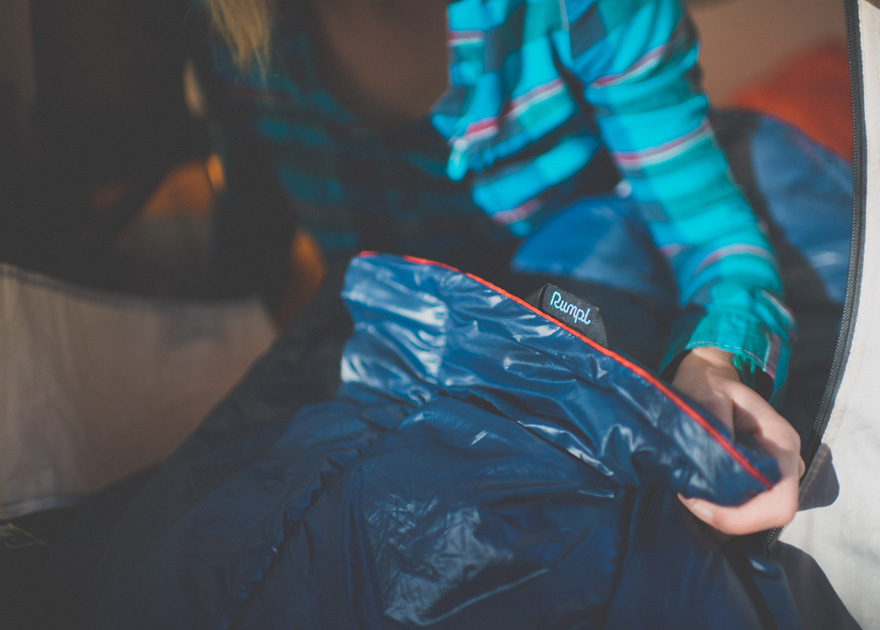 The team also needed a CNC quilter to stitch the final pattern onto the blanket. That design element, they believed, would be one of the key things that would set Rumpl apart from existing products. "We finally found a company that had CNC machines big enough to do any design on any size blanket we wanted," Robinson says. "While this is not the most cost effective nor traditional method of producing a comforter, it is by far the coolest, and it gives us limitless possibilities for new patterns in the future."

The stylishly flowing stitch lines, rendered in 20D ripstop nylon, definitely set the Rumplr apart from typical home bedding, as does its DWR coating, which makes it stain and odor resistant. Inside, the blanket has an ultrasoft synthetic down insulation that is washable, not to mention ridiculously warm and cozy.

The final result, the Rumpl's creators say, is something truly unique in the home bedding market. "We didn't invent the idea of using nylon in a blanket, and we are not using uncommon or rare materials, but we did take all these existing pieces and made them into something meaningful, useful and good looking," Polinko says.

In the Details: Converting the Sleeping Bag into an Everyday Household Blanket