The Science of the Snowflake 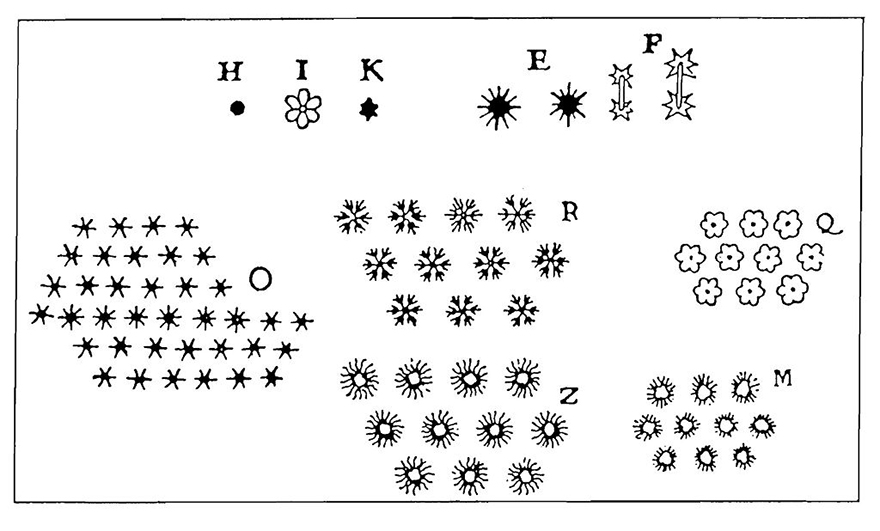 "These were little plates of ice, very flat, very polished, very transparent, about the thickness of a sheet of rather thick paper... but so perfectly formed in hexagons, and of which the six sides were so straight, and the six angles so equal, that it is impossible for men to make anything so exact."

The philosopher Rene Descartes made that observation when he attempted to catalogue snowflakes back in 1635, and wound up with a fairly thorough description of snowflake shapes, especially since all he had was the naked eye. See drawings above.

And we've experienced the same astonishment as Descartes when we wrote about platinum crystals. There is something about crystals that just looks too unreal. 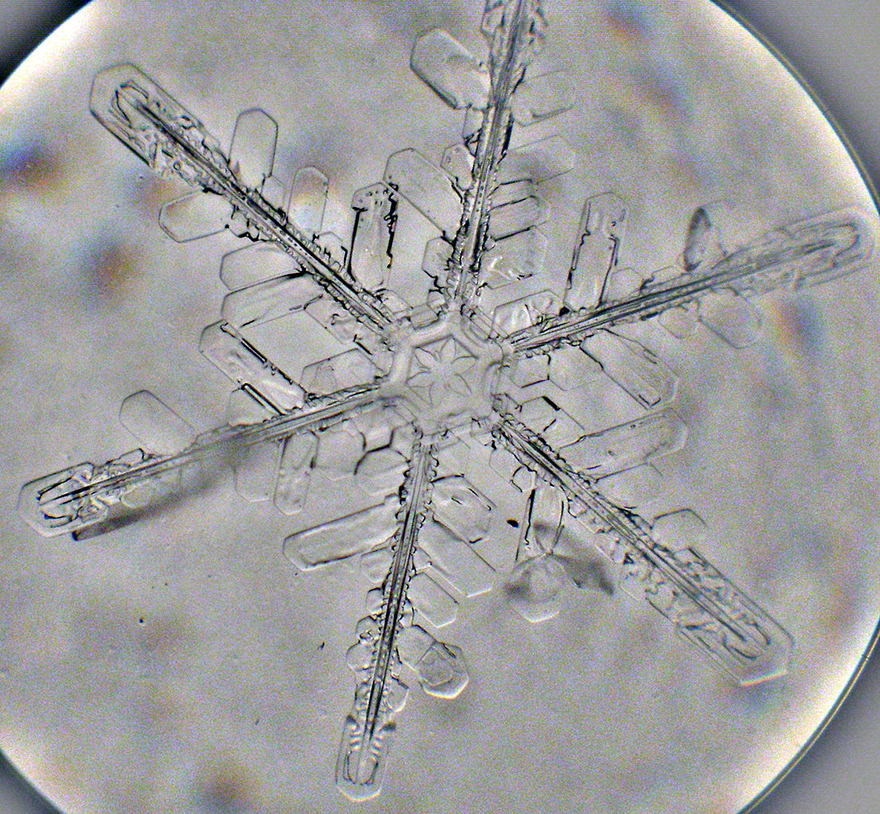 It needs to be around freezing for water vapor in clouds to form ice crystals and this is when they skip the raindrop phase altogether (although the warmest snow is pretty wet and is the best kind for snowballs.) When the temperature drops below freezing snowflakes become smaller and lighter, and feel more like powder.

But the key to a snowflake's amazing shape is hexagonal symmetry. Ice crystallizes in a form that is scientifically known as Ice 1h, this means that its base shape is a hexagon, but the interesting part is that if you turn the crystal 60 degrees it maintains a hexagonal shape. 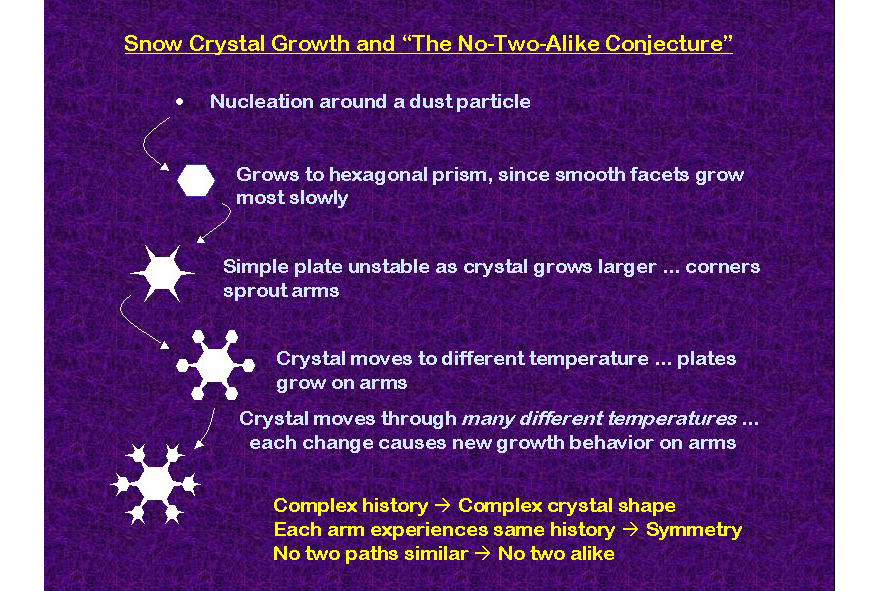 And this hexagon is due to a physical phenomenon called faceting: The ice crystal initially forms a six-sided prism. Then a second physical law kicks in called branching, this is what forms the beautiful arms that grow from each point of the hexagon. And this happens because ice grows fastest on the edges of a prism. As the crystal falls through the atmosphere (an average flake falls at an average speed of 3 miles per hour) it gets more complex, forming more and more facets and branches, until the flake arrives finally on the ground. Although the ice is clear, the scattering of light by the crystal facets and make the flakes appear white.

Check out this amazing image taken by Caltech physicist Kenneth Libbrecht who travels to Northern Ontario or Michigan to document crystals. 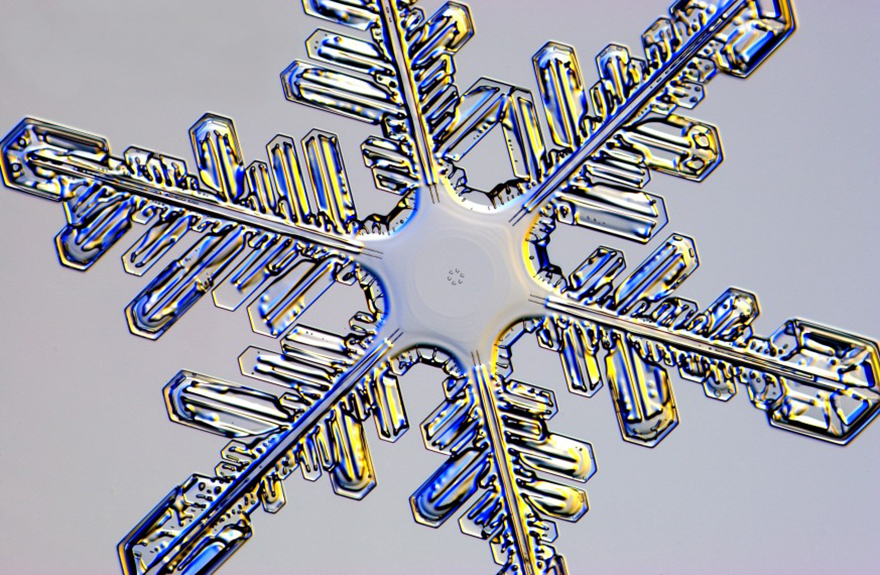 Libbrecht uses a tiny paintbrush to transfer the crystal to a glass slide and then takes the shot with a digital camera mounted to a digital microscope. His images are pretty striking, so much so that one landed on a US commemorative postage stamp in 2007. 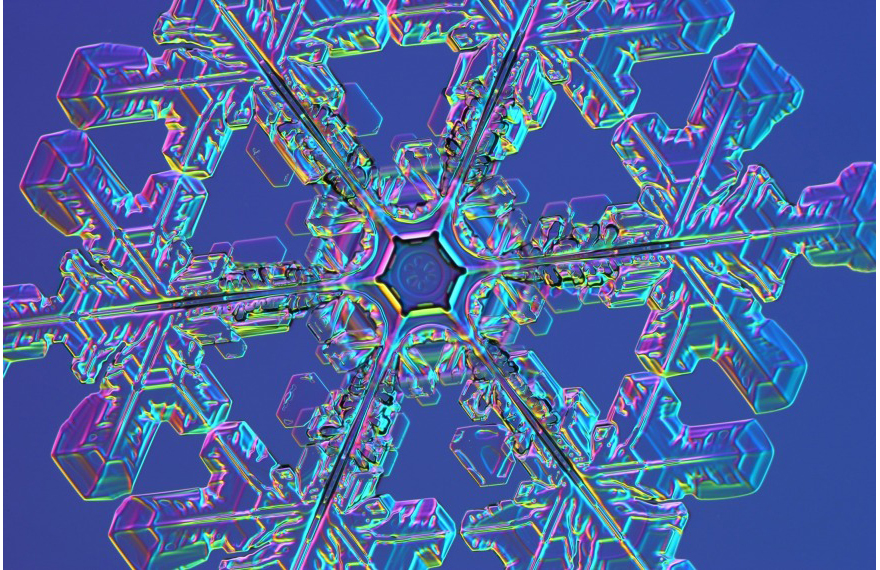 Scientifically we know that every snowflake is unique. This is because each shape grows more complex as it moves randomly through different temperature and humidity levels on its way through the atmosphere. (This also makes it very hard to measure—NASA says that we are 50 years behind rain in our ability to accurately measure snowfall.) Some philosophers might argue that it's possible for two snowflakes to be nearly identical, but others have also argued that according to the Philosopher Gottfried Leibniz, if two objects are distinct then there is some way in which they differ, therefore two snowflakes cannot be identical.

Philosophizing aside, it's pretty unlikely that the 10 quintillion water molecules that make up an average snowflake would fall in the exact same pattern twice. 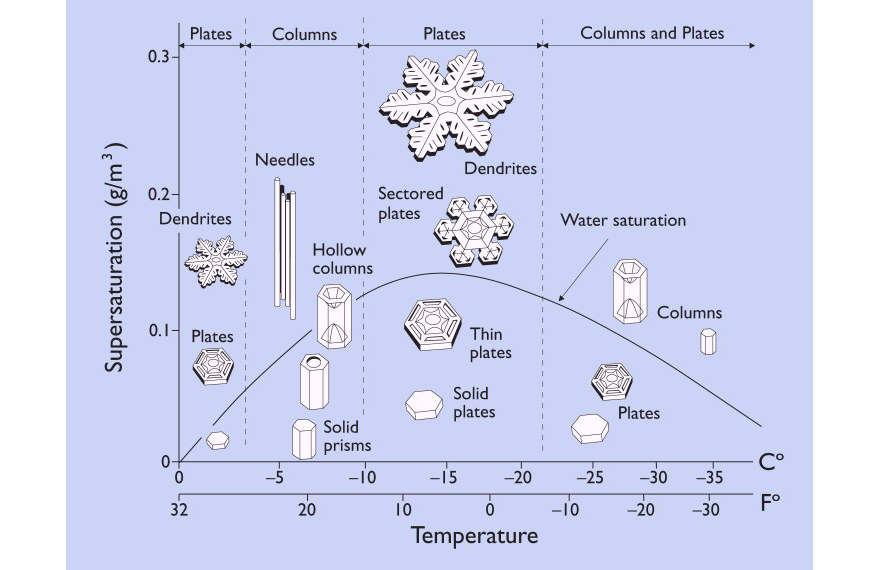 But there remains a lot of mystery surrounding what ought to be an ordinary crystal. Most of it is rooted in the slow growth of the snow crystal—as it travels from cloud to ground—that creates so many shapes. So much so that NASA launched the Global Snowflake Network, a huge crowd-sourced classification of falling snowflakes.

For more on the art and science of snow, and its flakes check out this lovely video created by USC Dornsife:

The Science of the Snowflake