Getting Hired: To Land a Job at LUNAR, Be Authentic, Ask Follow-Up Questions and 'Add to the Organism' 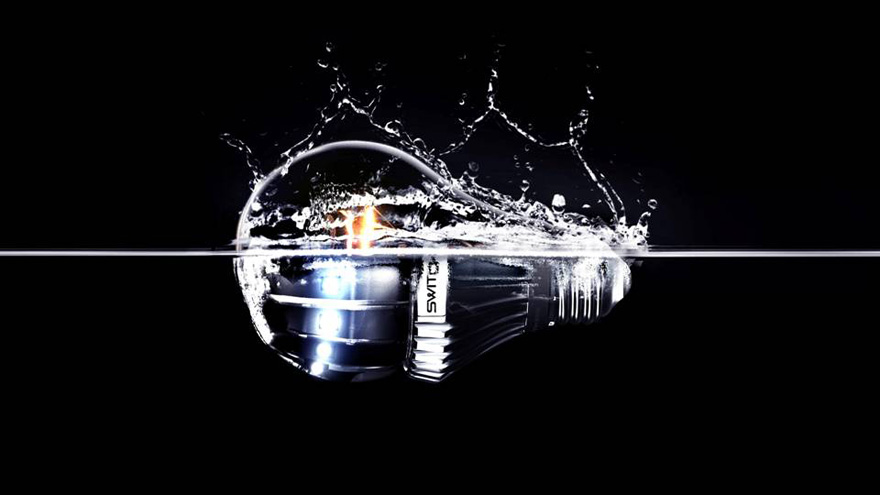 For Switch, LUNAR helped develop a liquid-cooled LED bulb that casts a warm glow and draws only 13 watts.

Founded in 1984 by Jeff Smith and Gerard Furbershaw, LUNAR has since grown into a full-service creative agency with offices in San Francisco, Chicago, Hong Kong and Munich. Still in touch with its experimental, California roots, LUNAR's 70 employees work on everything from high-concept cycle trainers to Koo, a combination bassinet and rocking chair designed for new parents. Jeff Salazar, who fell in love with LUNAR after a fortuitous meeting with Smith and Furbershaw while he was still in college, is now the vice president of design, leading the 15-person-strong industrial design team. Salazar's 19 years at the firm have helped him understand how to grow an energized and balanced community of talent.

First, it's about really understanding the need. The need could be driven by any number of things: a vacancy, an emerging market we want to spend more time on, an emerging skill set that we feel we need in order to complement what we already do. Rather than just plugging in a body, we want to make sure it lines up with our long-term goals and isn't just a near-term reaction—like, "Oh crap, we're busy, let's hire people." People stay here, on average, for seven to eight years, and I think it's because of how we thoughtfully identify needs and introduce new creative energy to the team.

Once we've identified a need, it may be that we already know someone—a freelancer, a contractor or a former intern—who could fill this role immediately. If not, we have to craft the right way to talk about it. Unfortunately, I don't think people always read that stuff. I think they just see, "Oh, so-and-so is hiring," and they send their portfolio. We have to then wade through an enormous queue of portfolios, and maybe one out of three are a fit.

In reviewing portfolios, I want to be moved by a point of view—because that's what we then want to do out in the world. And as I'm combing through portfolios I'll also be having conversations with the team about what we need. I have an idea for what we need in a creative director, for instance, but I'm interested in the team that's here now. What are they looking for? What's that persona like? 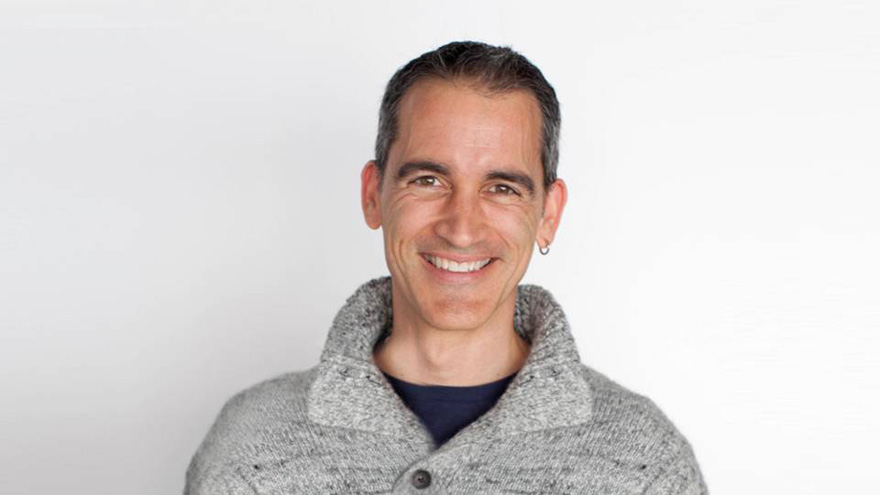 What makes good candidates stand out? And what are some red flags that might disqualify a potential hire?

There's not a formula. To job seekers, I would say: Just realize the context, be honest with yourself and try to deliver the essence in a way that's compelling. The work has to be thoughtfully presented even when you're not there. That's your job. Sometimes all people have to do is show me a couple of images, no text. If the work is there, it'll speak for itself.

Plenty of people will talk about storytelling. It's a tool we rely on every day, and I do expect somebody to have that skill, because it's so much more a part of the culture now. I just don't have the energy or the time to pull messages out. I want to do a first glance at the portfolio and feel like there's something there; then I can go back and look at it again later.

One of the most challenging things, more so now than five years ago, is that people are far more hybridized—meaning that they're less specialized or focused. How do you convey that in a meaningful way? In those cases, I really listen to how people talk about their work, and how they talk about themselves.

My push and pull is always the candidates' potential. Hopefully they have work that shows that potential, and is distinctive enough. Work that isn't generic or too trendy. There's a voice. They've got some chops and a point of view, which we can bring out within our ridiculously talented team. 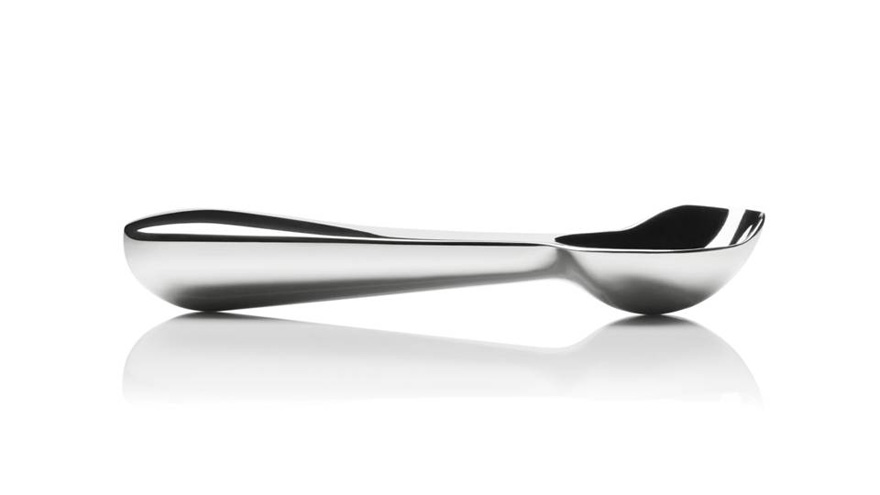 The Belle-V ice-cream scoop was designed to take advantage of the natural rolling action of the wrist to maximize scooping leverage.

Stay in control of the dialogue. Show up with an agenda. Show your interest in us by being thoughtful about how you spend the time. If you're just relying on me to run the show, I'll run it, but it says a hell of a lot about you if you take more initiative. Anybody that's going to interview you is coming from something else or is in between something; they've got a bunch of stuff on their minds, and how are you going to make yourself memorable?

Follow-up questions are important. It has to do with controlling the dialogue and the conversation. You don't want to be a pest, but all of this is a relationship that mimics how we interact with clients. We only have their focused attention for however many minutes or hours. They want to know our point of view, where the challenges and opportunities are. They're going to get off the phone and go do other things, and it's important to get that.

A red flag is someone who just doesn't seem engaged and interested. It's not only that my time is valuable, but if you really want to be here, ask me questions, challenge me, tell me what you want to do with your life. Tell me about how you failed and what you learned. Be transparent. You don't need to put on a show, but be authentic. When I feel like someone is trying to pitch me something, it's hard to get through. LUNAR is about authenticity and it's really great when you can connect on that level.

The other thing that is a must, whether candidates are experienced or not, is they've got to bring something new. Something that will inspire the rest of the team. That could be a tool, a process, a background, any number of other things. It's a fairly small team, and each individual really needs to add to the organism instead of sucking from it. I've been lucky enough to witness that happen over time as people find their niches. They may not be the strong, confident visionary type, but they love to refine and detail and we're OK with that. We've found places for people like that. You need to have a balance, especially in a consultancy that has a broad range of work that is highly detailed and highly conceptual. 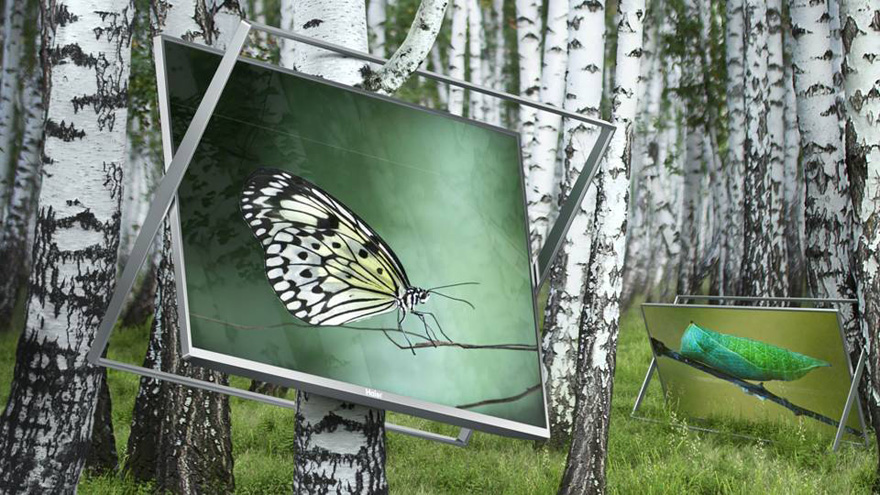 LUNAR worked with the manufacturer Haier to perfect its Easel series of televisions.

I really haven't witnessed anything I'd consider outrageous. I've seen some gimmicky ways to present work that are memorable in their gimmicky-ness. It might be a particular presentation method, like an animated portfolio. In the good old days when things were mailed, maybe it had a different kind of gravitas, whether it was in the construction, the materials or the size. No one's ever stalked our office. It's almost a little disappointing. It's about being creative, so I thrive off of that when I see it, and I don't think I've seen enough of it.

What other advice can you offer to designers hoping to work at your firm?

I'm interested in where individuals or designers want to help LUNAR get to. We have an understanding of where we're going to go, but I like to feel we value the passion and the drive of individuals. Be thinking specifically about LUNAR. When you come to talk about and show your work, be thinking about what it means for you to be here. Be thinking about how you can help move the needle and be part of that dialogue. It's really easy to fall into the trap of getting put into a position, and getting fed client work. Hopefully people don't want that here, and I wouldn't want that from people who show up here. So, again, be engaged in the conversation, and keep in mind that the conversation extends beyond the actual conversation we're having. Help me paint the picture of what it's like for you to be here. That means doing some homework and thinking ahead of time.

Getting Hired: To Land a Job at LUNAR, Be Authentic, Ask Follow-Up Questions and 'Add to the Organism'