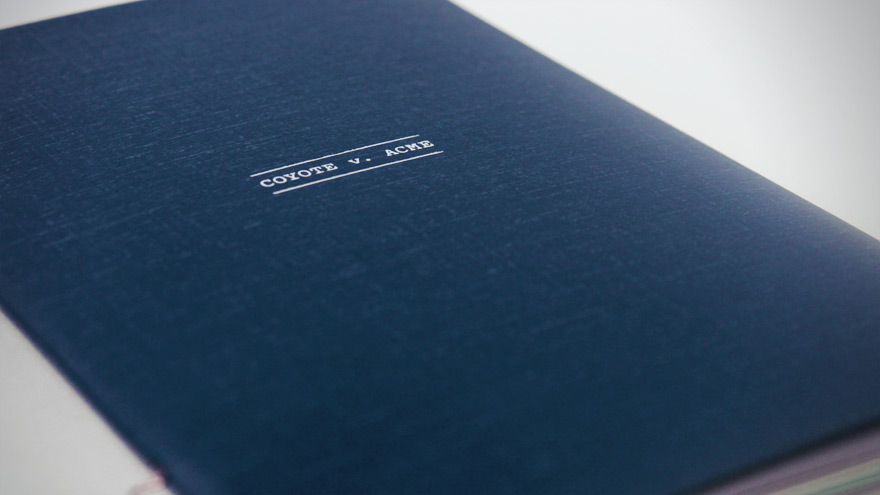 In 1990, Ian Frazier published a fiction piece in the New Yorker, casting an antagonistic yet universally beloved Looney Tune as the plaintiff of a court case against a corporate entity for its seemingly nonexistent QC standards. No doubt you are already familiar with the laundry list of complaints enumerated in Coyote vs. ACME. Time and again, we took pleasure in witnessing the episodic pratfalls of the pathetic Mr. Coyote (given name Wile), as the nefarious ne'er-do-well nearly obliterated himself on multiple occasions in his attempts to assassinate his long-standing rival, the Road Runner. Each and every time, a dangerous piece of equipment would malfunction at the worst possible moment with suspiciously predictable consistency, rendering the aggrieved as a veritable case study in schadenfreude.

The suit alleges that ACME is at fault, but new evidence suggests otherwise. 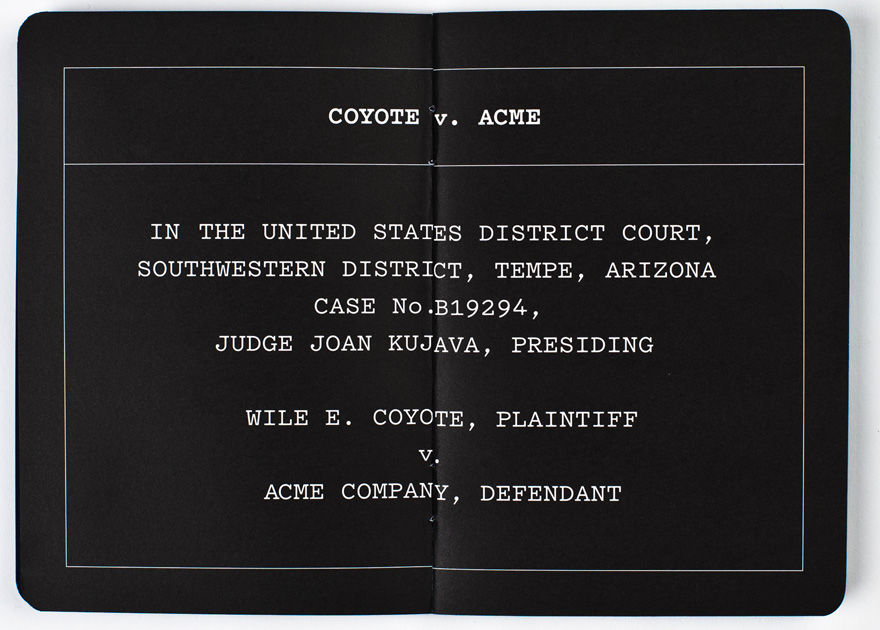 Glitches aside, the various instruments of death and gravity-defying wearables employed by Mr. Coyote in the cartoon are much more than mere stretches of the imagination—they are, in fact, prime examples of design fiction. We just didn't realize it until a designer from Pentagram took a stab at bringing the cartoon to life in a new way for their annual Christmas card.

Unlike the fictional plaintiff, designer Daniel Weil succeeds in his efforts: From the iconic spherical bomb to the more obscure Burmese Tiger Trap, these concepts may be more utilitarian than his previously-seen "Clock for Architects," but the inner workings of the five ACME products are certainly no less considered. 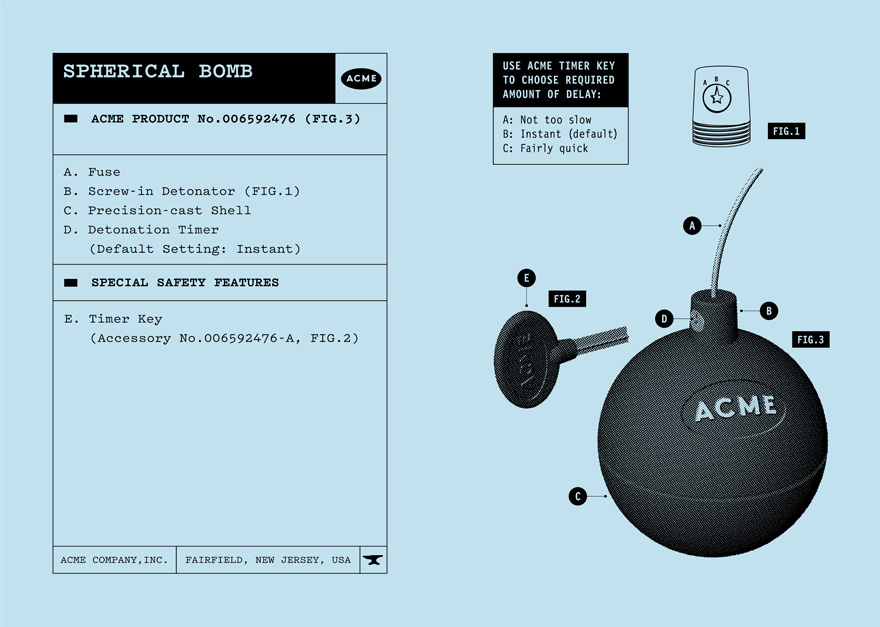 Click image to enlarge
Click image to enlargeJust as Frazier's hypothetical lawsuit outlines the various incidents and subsequent injuries that the Coyote has suffered while operating ACME products—"severe singeing of the hair on the head, neck, and muzzle," "sooty discoloration," etc."—Weil has brought the same attention to detail for the visual counterpart to Frazier's fiction. "My partner Michael Bierut suggested the idea is reprinting Ian Frazier's piece as an entertaining Christmas card from Pentagram," Weil says. "His request was interesting yet daunting as at that point I couldn't see how I would approach the product design aspect of the assignment. Then it became clear that my role as a designer was to be the ACME designer and respond to both the fiction of the original cartoons and to the legal comic/serious document of Ian Frazier." 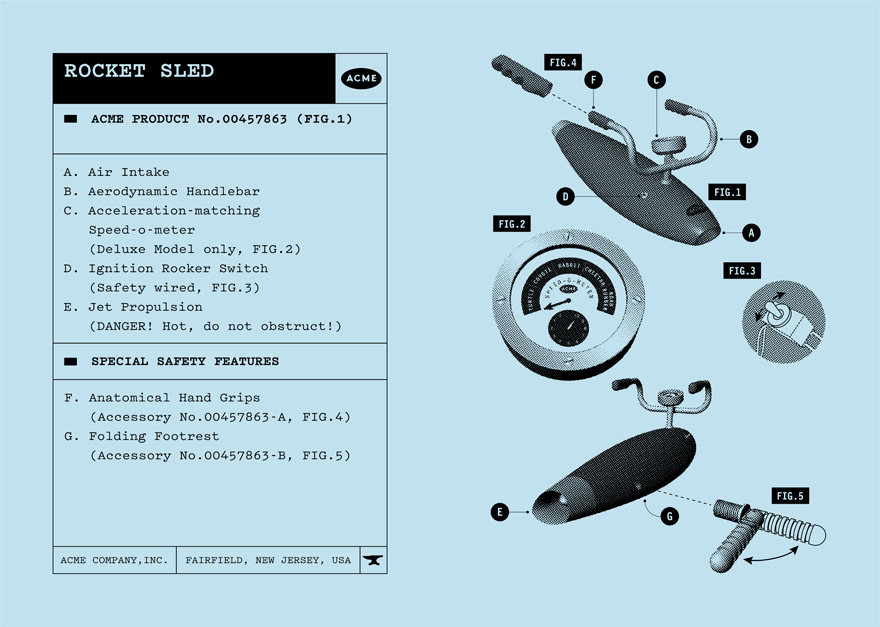 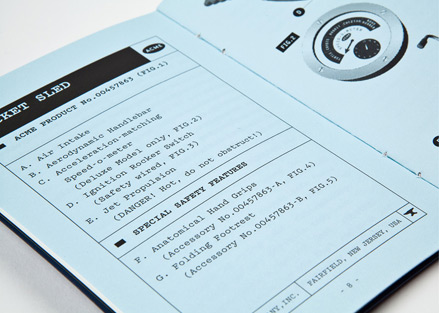 Weil, who is a part of the original Looney Tunes generation and relates they were a part of the "visual and imagination diet" of his early years, spent the better part of a month pulling together diagrams and sketches mimicking photorealistic diagrams à la McMaster-Carr. But if ACME's extensive arsenal exist solely in animation cels and our imaginations, Weil found that the design process was true to life. "In thinking about the illustrations seriously, there was no difference between real life and the designing of these objects," he says. "They are all situation-driven and they respond to a very precise narrative with the intention to exonerate ACME in court from any wrongdoing." 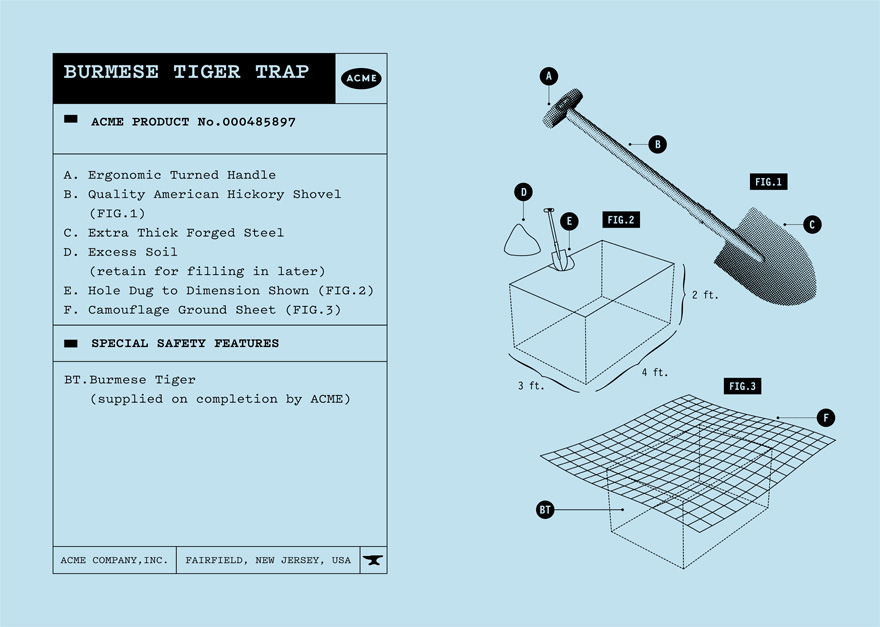 Weil noted that the tiger trap was the most challenging one: "It's both a diagram and a conceptual piece with a punch line 'Burmese Tiger supplied on completion by ACME.'"

Thus, his technical drawings serve as an exhibit from the defense, echoing Frazier's deadpan humor in a different medium. "The humor in the illustrations is found between the lines," Weil says, and indeed his depictions are rigorously accurate—albeit with an exculpatory twist. It turns out that the user is responsible for, say, using the "Timer Key" that comes with the bomb, or a "Weighted Armor Jacket" (for "Balance and Safety") for tyro rocket-skaters. By highlighting key accessories, Weil becomes one himself, so to speak, in the role of a safety-minded designer for ACME Company. 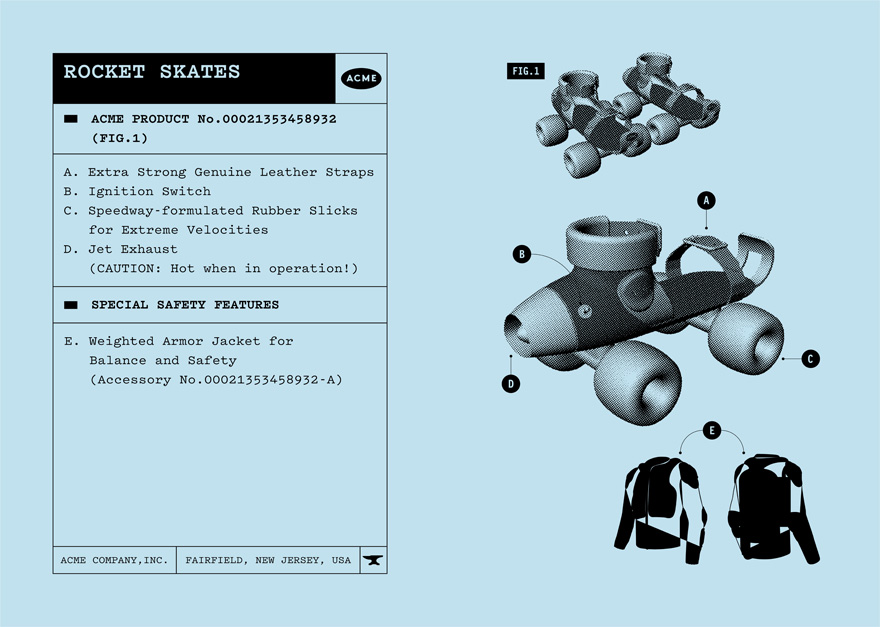 Of course, the plot of the cartoons has nothing to do with whether Road Runner would get away—rather, it was a matter of just how the hapless Coyote's plan might backfire due to his unwavering faith in the (seemingly) ever-defective devices. Weil felt compelled to prove that ACME products really are not that poorly designed, but he admits that one gadget left a lot to be desired. "The spring-powered shoes are a very primary cartoon example of malfunction," he says. "The spring is an object of fun—already not unlike the 'slinky'—so visually in the cartoon they are loaded to be a badly conceived invention and anarchic object." 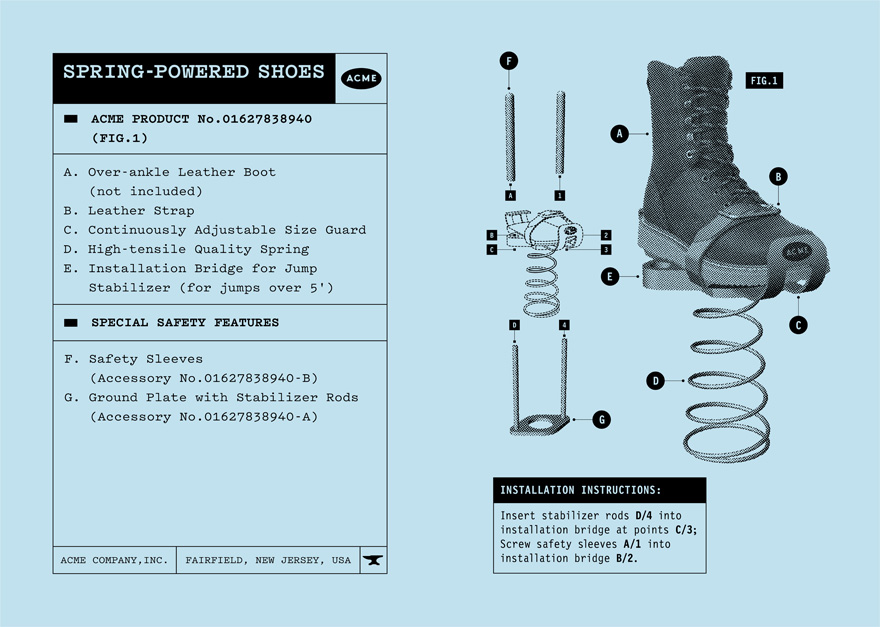 Weil's colleagues Michael Bierut and Jesse Reed designed the object itself, a handsome Moleskine-sized booklet—which is probably more refined than your average legal document, what with the navy blue cover, brass loop binding and impeccably aligned typewriter text. According to Pentagram's website, the team also created their own version of an official ACME Company logo, which they wore proudly on lab coats for a special reading of the book in New York City last month. 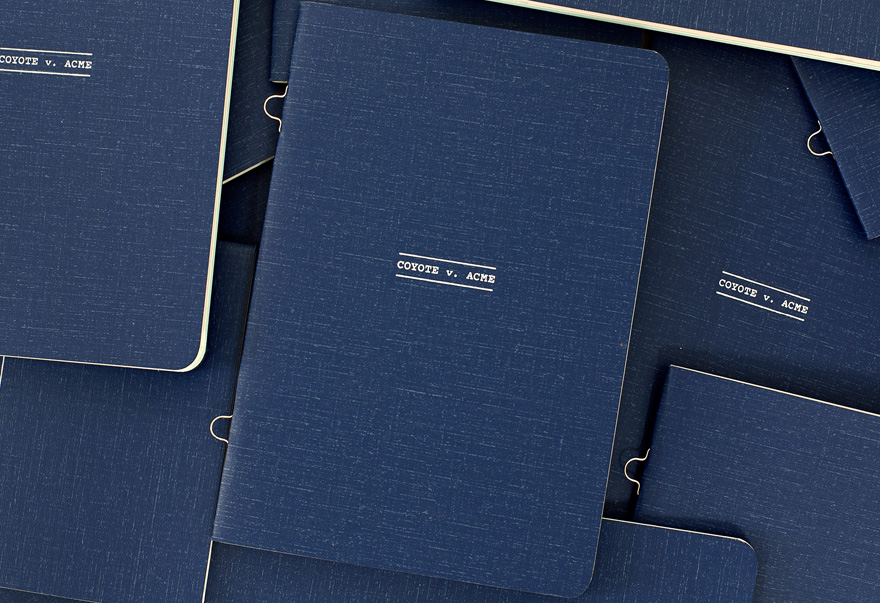 And while the project is an amusing bridge between high and low culture, the winsome diagrams belie a deeper meaning as depictions of authentic cultural artifacts. "All of the designs face the same challenge: to create a missing history of ACME products," Weil says. "I think this is a forensic identity exercise. It fills the gaps of what ACME is as a company—no more than a name on a crate. It now has a real life catalogue to add to the cartoon world enigma. Imagination is one of the most important tools when designing. It's a tool for design."