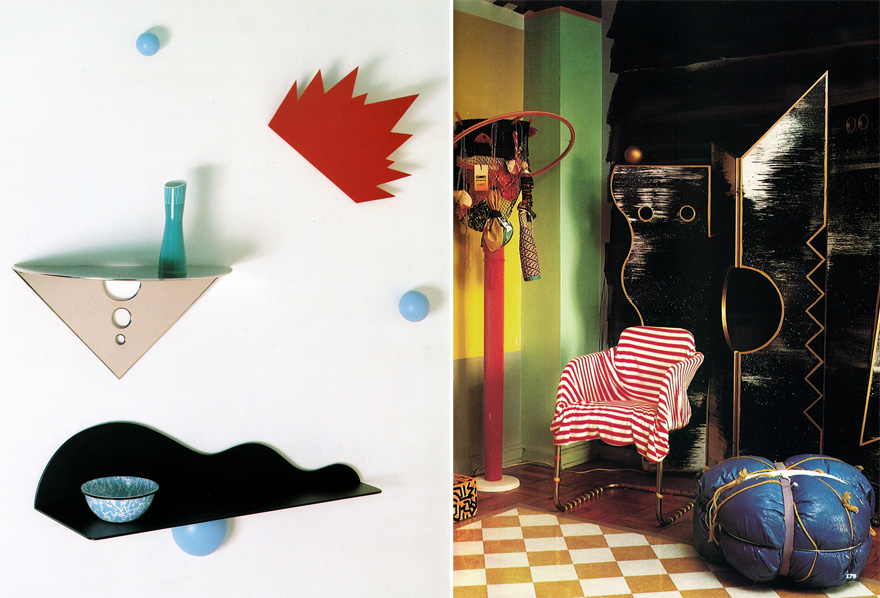 In this series, Matthew Sullivan (AQQ Design) highlights some designers that you should know, but might not. Previously, he looked at the work of Luigi Caccia Dominioni.

The best a designer can do is consistently offer forthright attempts at communication, by way of an open and multifaceted mind. The offerings of most designers are meant to be metabolized instantly, as minor tweaks to existing models; this is commerce without content. It is a rare designer who resists what is a very seductive and embedded process. Rarer still is a design practice that weds a loving knowledge of her/his craft with reflections of the self, the client, the globe and the cosmos. The latter description was Dan Friedman.

Friedman was central to the 1980s New York scene. The decade and place was ridiculously fertile, breeding genius in every corner of culture—home to the likes of Sherrie Levine, Alan Buchsbaum, Jim Jarmusch, Jean-Michel Basquiat, Haim Steinbach, John Zorn, David Byrne, Paul Auster, Keith Haring and on and on... This multidisciplinary, multicultural, gender-role-fighting, polysexual vanguard is often placed under the banner of postmodernsim, though many involved bristled at this ism (Friedman referred to himself as a radical modernist). Friedman came to this place of hardcore and restless bounty by way of a fairly rational progression, almost pedigreed. From the Midwest he went to college at Carnegie Mellon, from which he traveled to Basel to study orthodox modernist graphic design under Armin Hoffman (and others) at the Schule für Gestaltung. In the '70s he was the epitome of success in his field, with teaching posts at Yale and positions at Anspach Grossman Portugal and Pentagram. But in 1982, deeply disenchanted, he restarted his private practice. "What I realized in the 1970s, when I was doing major corporate identity projects, is that design had become a preoccupation with what things look like rather than with what they mean." 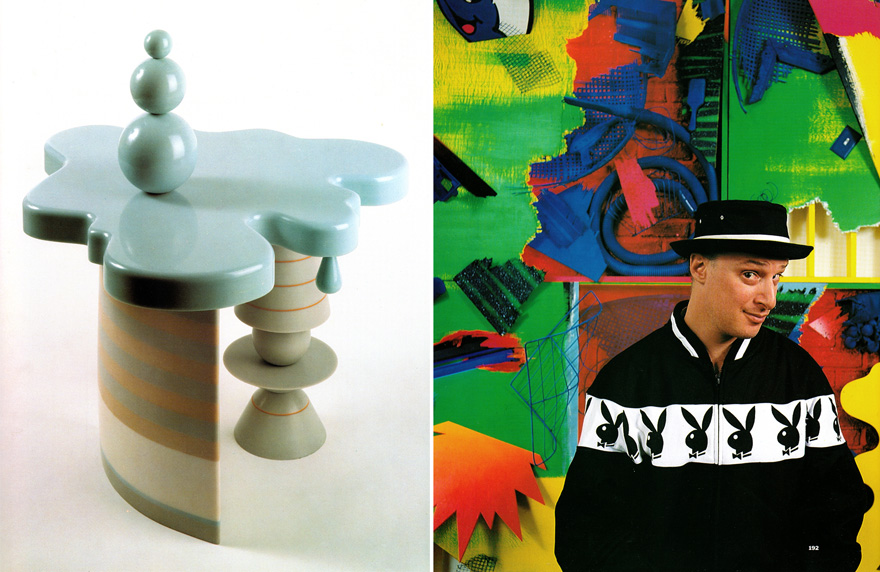 Left: Friedman's 1988 Fountain table for the Formica Corporation. Right: Friedman in front of his 1985 assemblage The Wall. Top image: Astral shelving and wall elements (left) and Friedman's apartment circa 1982 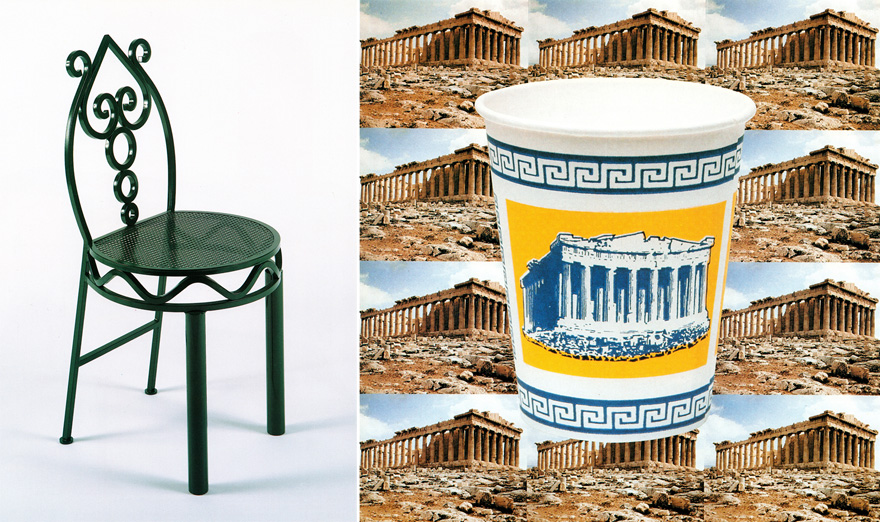 Left: the Corona chair for Neotu (1991). Right: a Friedman collage for the Cultural Geometry show at Deitch Projects in 1988

There is little in Friedman's oeuvre that isn't simultaneously incisive, formally beautiful, groundbreaking and meditative; this was true for the interior his own apartment, his various logo graphics (his work for Paul Ludick and Mobiflex are personal favorites), his obsessive array of folding screens (see Primal Screen, 1984), his publication and book designs (particularly the three books he designed in conjunction with Jeffrey Deitch in the 1990s) and his furniture for the now defunct Parisian gallery Neotu (see the Corona chair from 1991).

Although Friedman didn't necessarily endorse the label postmodern, it's not incorrect to associate his work with that movement's preoccupations. Friedman himself said, "I have always tried to move away from being associated with style"—and that notion itself is a large part of the postodernist proposition. "Style" is a sort of standard, something repeated enough that a label can be applied. As we all know, labels, standards and styles are a tricky business: Who is making the standard? Who is responsible for exclusion and inclusion? Roland Barthes probably said it best: "Who is speaking thus?" Friedman's work, even very early on (particularly his graphic work for the Neuberger Museum and Yale University), had this sensibility—it was inclined towards mutation, not necessarily loose or improvisational, but resistant and searching. Maybe it could be said that his work, being so close to modernist tenets (Platonic forms, universality, reduction, purity, modular structures, etc.), eschewed the modernist reverence of logos for the postmodern inclusion of genealogies.

One thing is clear when thinking about Dan Friedman, and this should be taken as a model of sorts: He had scope—he had a really wide scope that he effectively welded to an ethical fortitude and an educated talent. His work always strived, taught and was, ultimately, deeply communicative. His work in the 1990s was a continuation of what he had always done, but building in momentum and speed. Unfortunately, his output was truncated by his death from AIDS at the age of 50 (fuck Reagan). 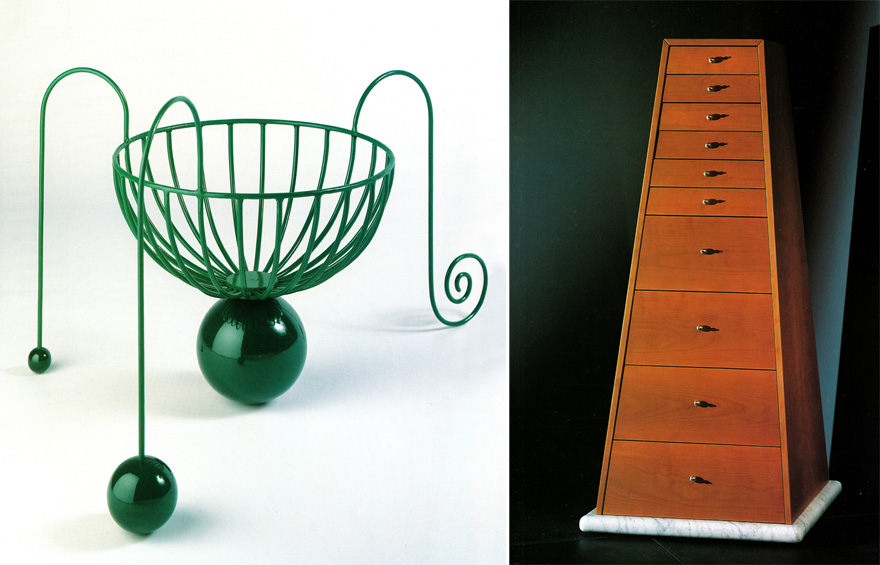 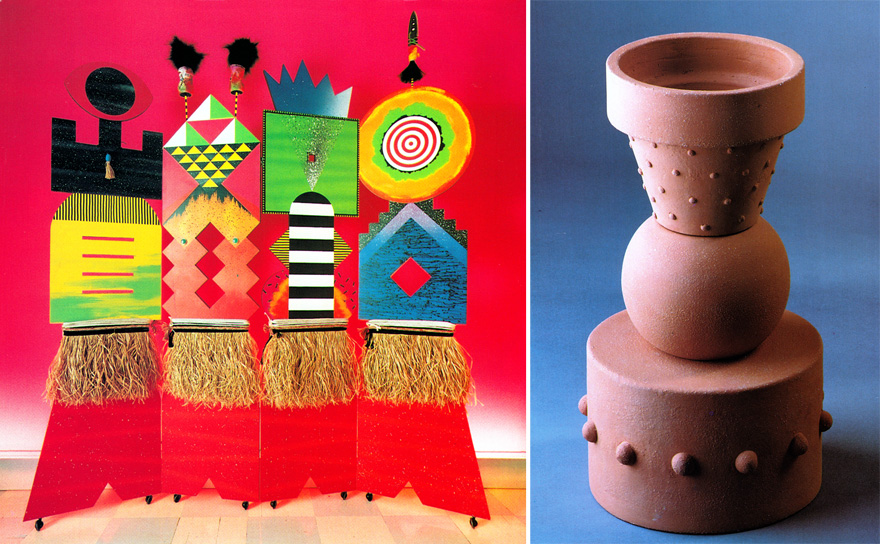 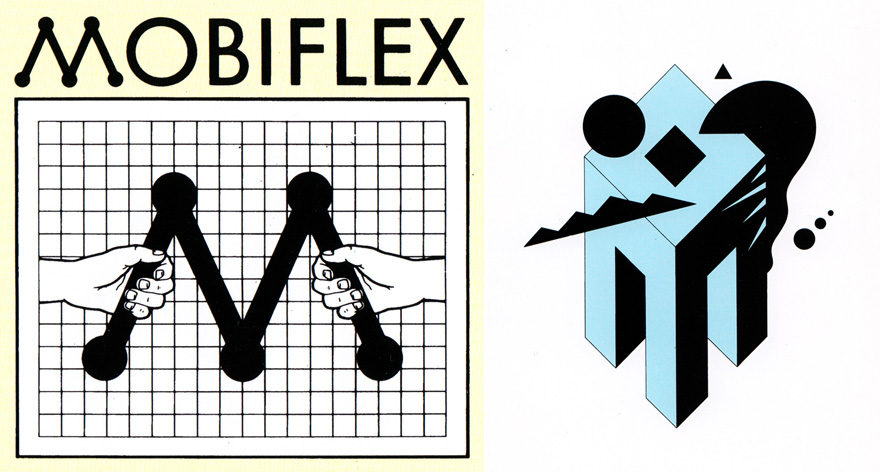 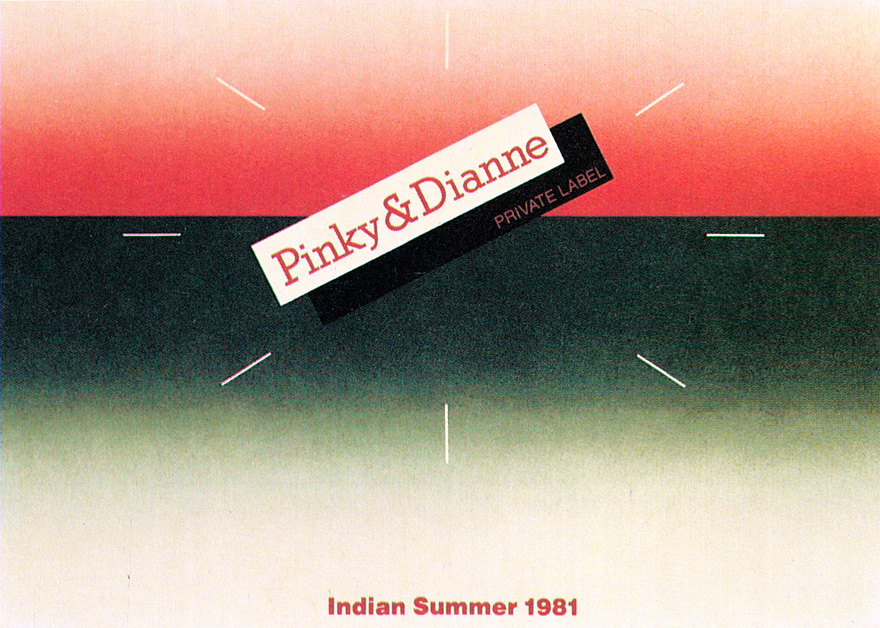 A 1981 announcement card for the Japanese fashion label Pinky & Dianne 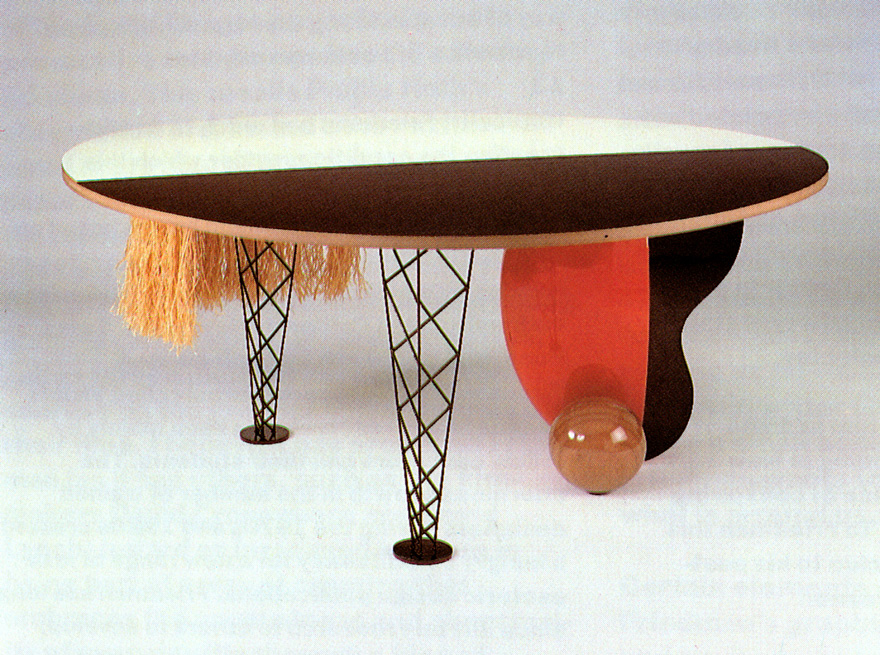 The Primordial table for Alchimia (1986)