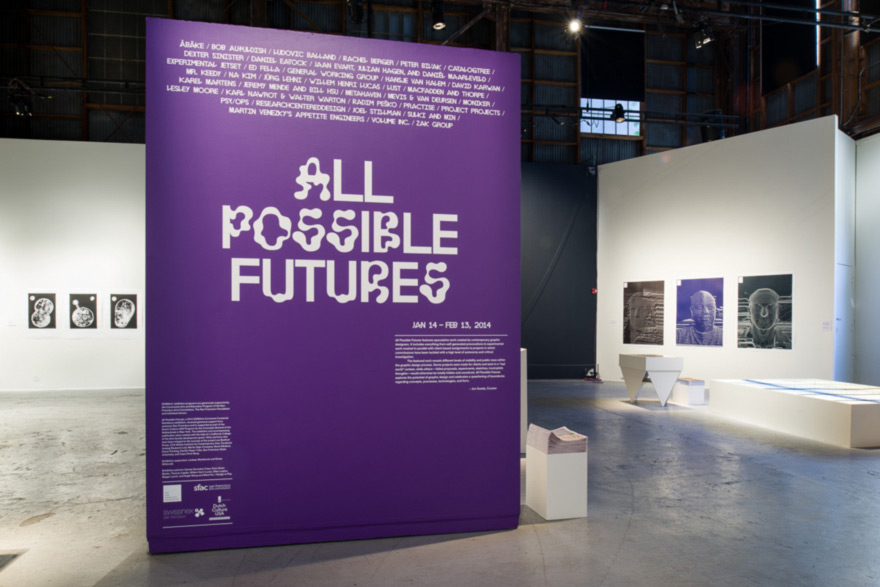 Curated by Bay Area designer and educator Jon Sueda, All Possible Futures features 37 projects from renowned designers Ed Fella, Experimental Jetset, Daniel Eatock, Martin Venezky, and many more. The idea for the exhibition originated from Sueda's interest in showcasing the value of design projects that failed for any number of reasons, including being rejected by clients. The result is an exhibition of speculative design pieces that celebrate the questioning of boundaries regarding concepts, processes, technologies and form.

Christine Todorovich / Design Mind: The title of the exhibit is "All Possible Futures"—it seems you're implying something about the parallel lives these speculative projects lead? Can you talk more about the meaning behind the title?

Jon Sueda: Before All Possible Futures was an exhibition, it was actually a title to an article I wrote in 2007 for a publication called Task Newsletter. The original piece was a set of interviews with five graphic designers, and also the renowned critical design team Dunne & Raby, investigating speculative design projects. At that time, the criteria was clearly inspired by "visionary" or "paper" architecture... each project had to somehow distance itself from "real world" parameters, perhaps representing potential imaginings of the future. The final selection ended up being a set of project proposals that were either rejected by their client or critical provocations never intended to be produced. This exhibition is a build-out, or expansion, of these early ideas.

Your interpretation of the title is correct. In fact, I titled the adjunct program for the exhibition Parallel Universe?. In a sense, you could argue that all the work in the show is an example of a "parallel universe" of graphic design... this work operates on the margins of practice, created by designers who initiate their own investigations that exist outside or question the traditional commission structure. 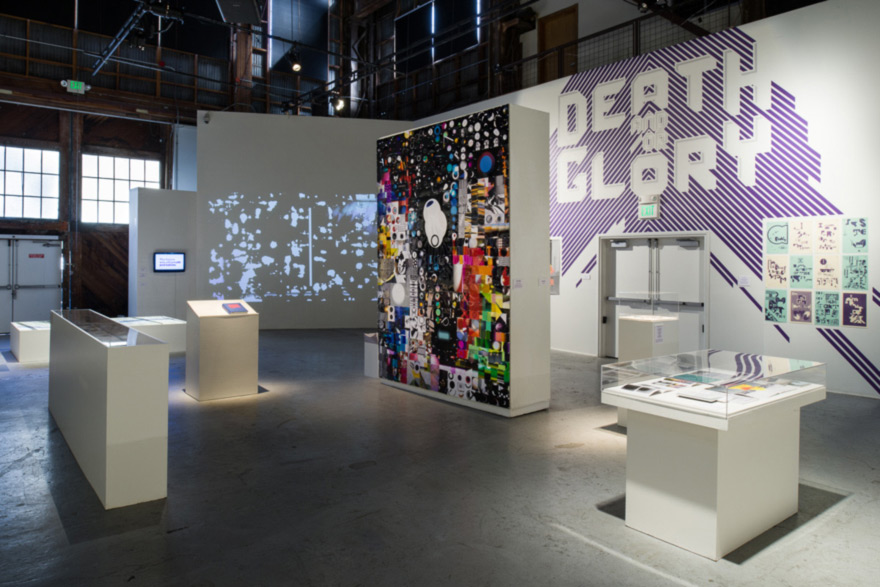 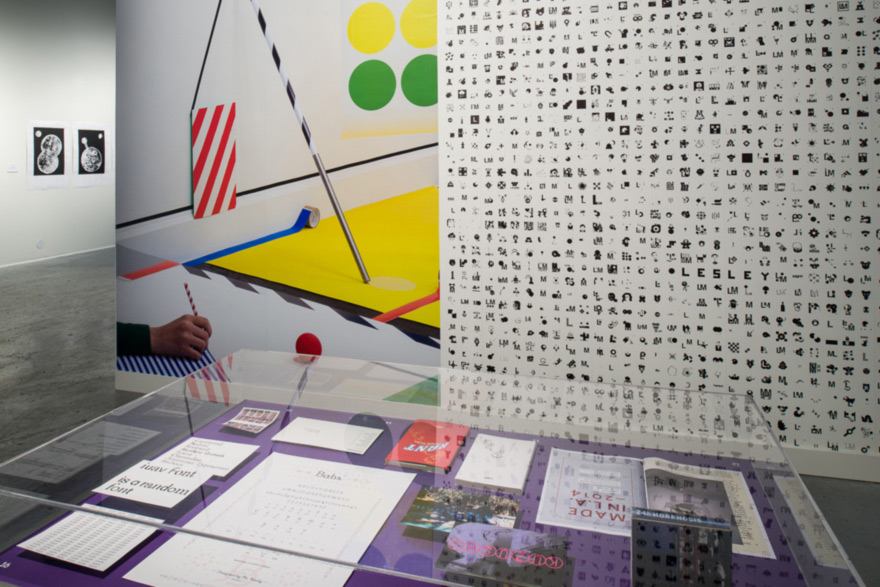 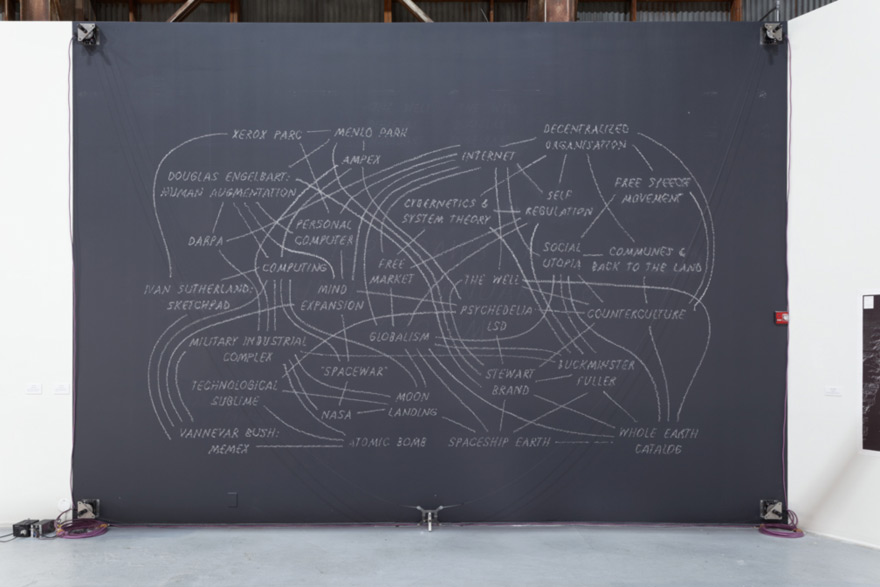 Through this exhibition, you posed the question, "What happens when graphic designers extend the boundaries of their discipline and initiate creative explorations built on risk and uncertain ground?" What's an example from the show that highlights the value of this kind of inquiry?

"Risk" is maybe a dramatic word: what are graphic designers risking, really? But I do see much of the work as exploring new contexts, technologies, and formal languages. Jürg Lehni's practice, for example, blurs the boundaries between graphic design, engineering, programming, and art... He's a designer that is able to create his own tools, which allows him to explore both new forms and break into new contexts. Viktor, his scalable robotic drawing machine (which is featured in All Possible Futures), is able to draw with chalk on large surfaces and has become a dynamic platform for performances and presentations. Hector (Viktor's spray paint wielding older brother) has become featured in many art exhibitions and has made everything from large wall paintings to editions on paper.

As designers, our profession is largely defined by the work we do for clients. What do you think is the consequence of incorporating self-initiated experimental projects into a design practice at large?

Self-initiated projects in the context of graphic design is nothing new... Since I started design in the mid-90s all the designers I admired (Ed Fella, Rudy Vanderlans, Allen Hori, Studio Dumbar, etc...) had some form of self-generated practice. With the Internet today, this type of work has much more of a life than it did back then... it's now very mainstream and easily accessible. The positive side of self-initiated projects is that it gives the designer an area to explore personal interests and subjects that might not be of interest to their clients. Someone like Ed Fella is a great example of this. Over the early part of his career as a young commercial artist in Detroit, he worked on automobile ads and health care brochures by day and simultaneously created a separate body of experimental work that emerged publically much later (in his 50's) when he attended Cranbrook and became the iconic "Ed Fella" we know today.

On the other hand, the negative side is that self-initiated projects give the designer an area to explore personal interests and subjects that might not be of interest to their clients. In my conversation with Experimental Jetset during this show, they [brought] up a very valid point that when you have a "parallel practice," and completely separate your personal interests and creativity from the work you do for clients, you risk completely marginalizing what you do... you become a designer who has two portfolios: one body of work for "love" and one for "money," which can be a real detriment to your work. I'm paraphrasing, but they use the hypothetical example of Hitchcock making really commercial "blockbuster" movies, and going home and making really enigmatic "arty" films in his basement on the weekends... to them it's much more interesting that he found a way to fuse those two ideas together.

I think both points of view are valid... after all my research, the parallel practice tends to be more of an American approach. Designers in the exhibition from Europe seem to agree with the sentiments of Experimental Jetset... this is a whole other question on how cultural context really shapes the production of graphic design. 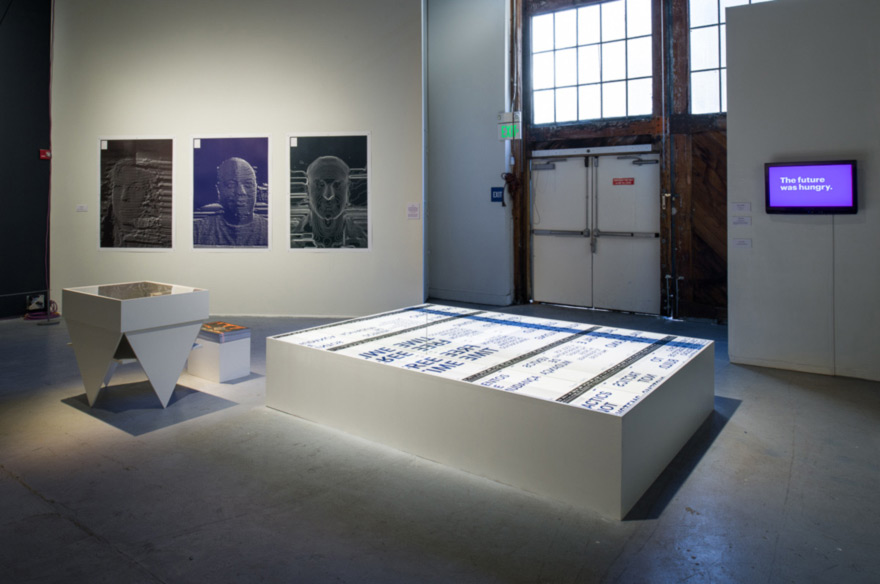 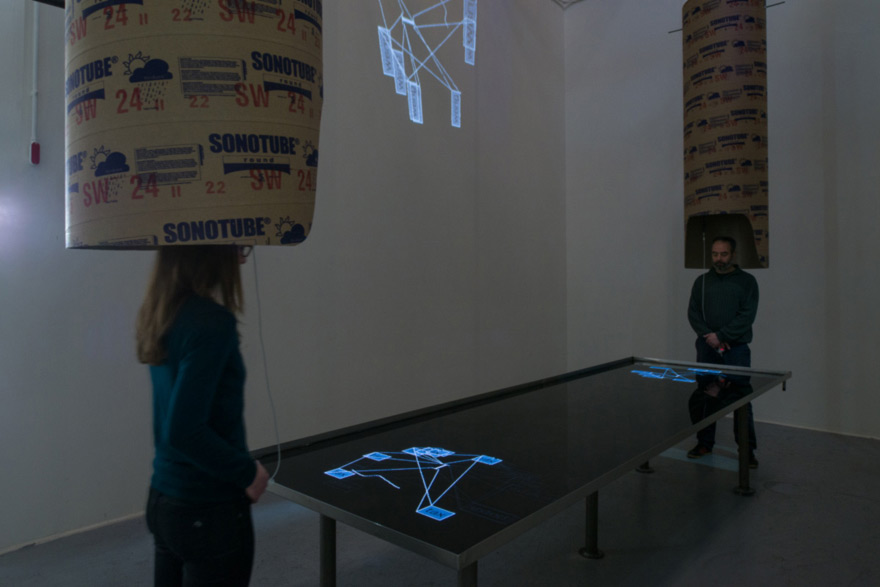 Designer Brenda Laurel is often quoted for saying, "A design isn't finished until somebody is using it." If they're not being used, what's the value of the unfinished works featured in APF?

Other design disciplines, like architecture for example, have a long history of speculative work. Since the 60's "visionary" or "paper" architecture practices have created designs that are not really intended to be built but represent idealistic or utopian imaginings into the future. This area of inquiry is fully embraced by the architecture community and our larger society, and is thought of as valuable and even a necessary contribution. In contrast, the profession of graphic design (at least in the US), doesn't really support work that is made for pure investigation... In general, projects awarded by professional organizations need to be produced fully "realized" within a certain model where there is an external source—a "client" generating the project. The featured work in the "Unrealized Archive" within the show are projects that I've learned about through conversations with friends and colleagues over the past ten years or so. They are really interesting inquiries that were perhaps too radical for the time they were proposed or maybe the technology to execute them didn't exist... some are just good ideas that got rejected for some strange reason. To me, the value of including these in the exhibition is allowing them to enter the larger discourse of graphic design and propel our discipline forward.

It seems relevant to point out that you raised funds for this project on Kickstarter—do you think crowdsourced fundraising methods like Kickstarter are furthering the ability for designers to question boundaries by enabling them to author their own projects?

I think Kickstarter is a great tool for creating opportunities... It allows many creative projects to get off the ground. However, I must say that Kickstarter was only a small part of my backing for the show. I had much greater support from organizations like swissnex San Francisco, The Consul General of the Netherlands, and CCA. Without the greater support of these organizations the show wouldn't have happened. 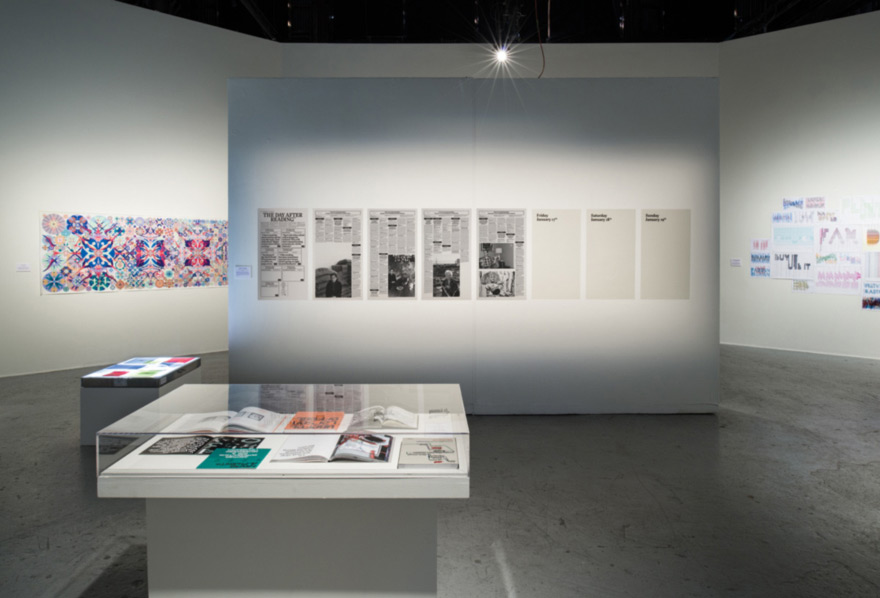 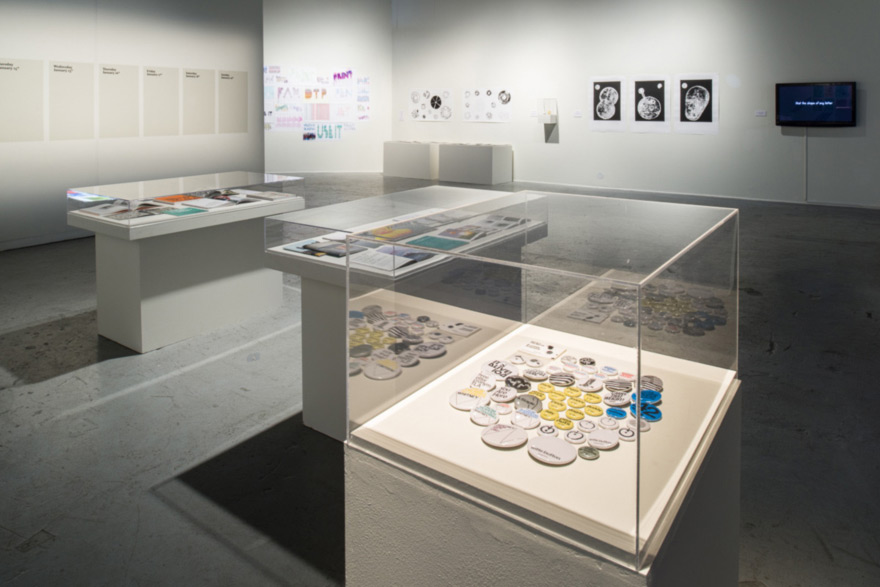 Exemplified by the rapid prototyping mantra "fail fast, fail early, fail often," the design industry is embracing failure as a means of innovation—what do you think this particular body of work says about failure?

I think failure is often the result of asking questions, rather than looking for easy answers. Graphic design is a very unstable process that cannot be measured so easily, and doesn't nearly result in the precise outcomes we intend... I think we fail way more often than we admit.

Beyond the notion of learning from failures, it seems the significance of an exhibit like this is that it says something about time—the projects serve as artifacts representing the designers' hopes and hypotheses about the future. What story does APF collectively tell about this current moment in design?

Every exhibition like this is a mirror of what the curator is interested in and looking at right now. This show is not trying to create an objective or comprehensive picture of contemporary graphic design. I spoke at a conference in Italy last year where another curator proposed that we should all start looking for another profession to go into because Graphic Design will not exist in 10 years! This exhibition's narrative doesn't support that point of view.

All Possible Futures is my vision of a possible present and future for Graphic Design, which involves the blurring of disciplines, an idiosyncratic and integrated use of high and low technology, critical engagement, and formal invention. I would like to leave it quite open for people to see the show and form their own conclusions of how (un)likely this future is. 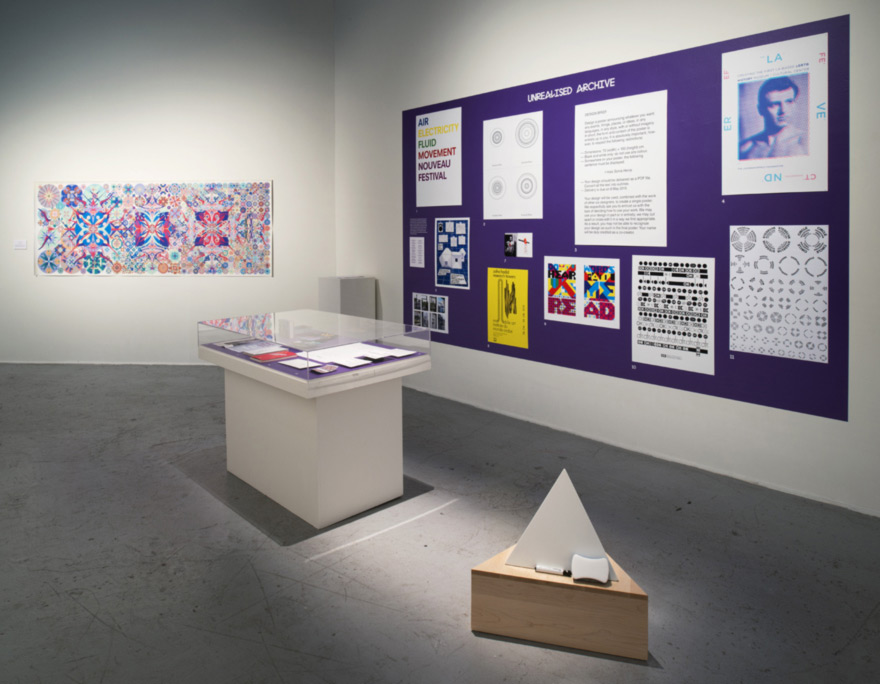 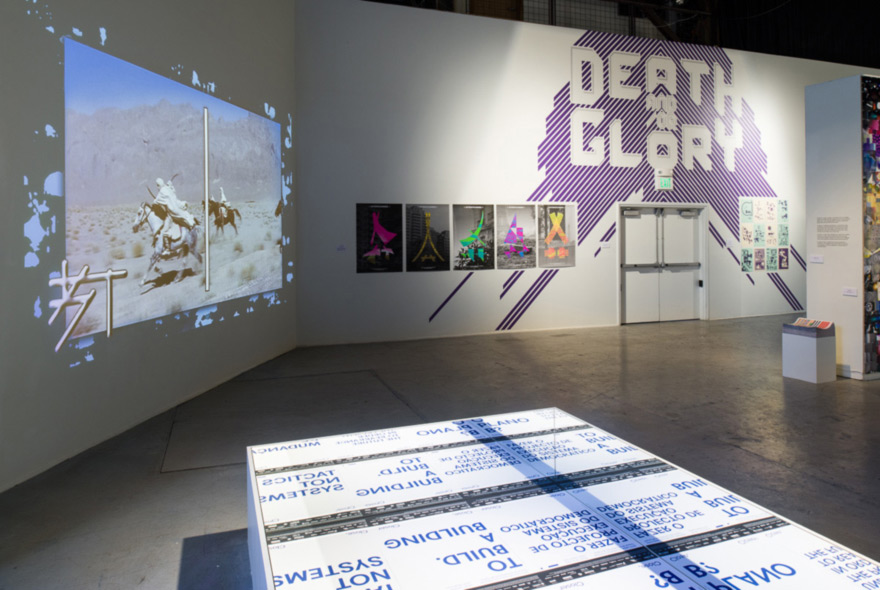 All Possible Futures will be on exhibit at SOMArts in San Francisco until February 13. For those not local to the Bay Area, an exhibit catalog will be released in mid-February.