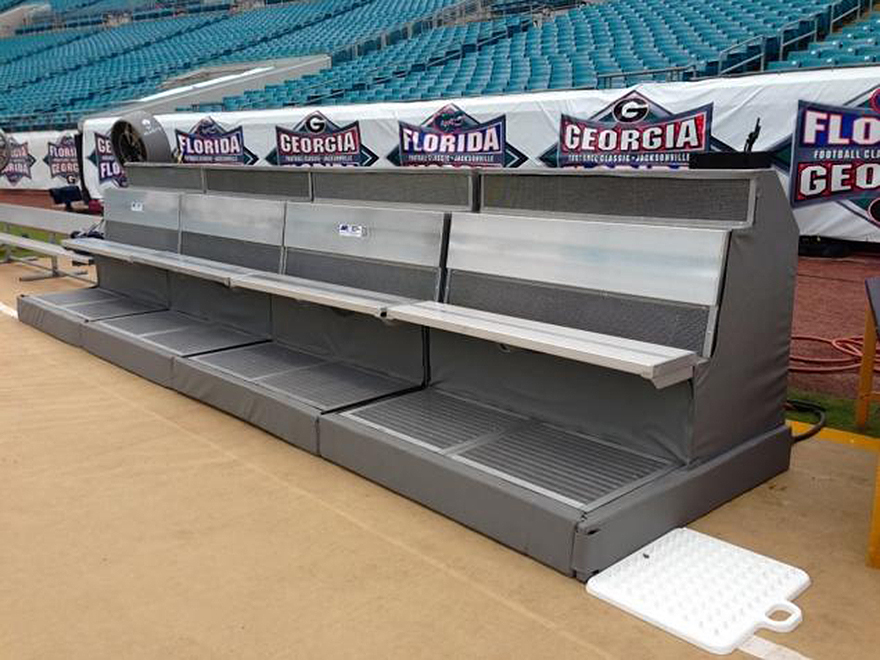 Those of you who watched yesterday's Super Blowout might have found more interesting viewing on the sidelines. You may have spotted, between the bouts of non-action, the chunky-looking benches you see above.

As their size and conformation indicates, those are no regular benches. With early weather forecasts unable to rule out a cold snap, and because it was popularly assumed that Denver was going to show up and actually play some football, keeping the players warm on the sidelines was a concern. So a Florida-based company called Athletic Recovery Zone was commissioned to deliver their Recovery Zone benches, which blow hot air out of the bottom and headrest, encapsulating players in a cocoon of warmth.

The benches first hit the market in 2010 and were originally designed to create the opposite effect: Brian Cothren was contacted by the Jacksonville Jaguars because their yankee players couldn't cut the swamp-like Floridian humidity. Cothren's aluminum, air-conditioned design kept the players from wilting on the sidelines (even if they didn't do a damn thing for the Broncos), and he successfully launched ARZ to produce them.

The Recovery Zone benches are rented, not sold; installation requires a forklift and for ARZ technicians to route plumbing and electrical into the units. They can be switched from hot to cold, and in addition to sports venues—for college ball, the PGA, NASCAR and the like—ARZ is now targeting "the harshest of indoor or outdoor workplace environments" in the commercial and industrial sectors. Smelting operations, oil and gas rigs, and even paper mills are places where workers are exposed to extreme temperatures and could use a little temporary relief.

ARZ claims that the temperature relief is proven to boost employee productivity and morale. But we're guessing they're not going to sell too many in Colorado.