The Efficient Passenger Project vs. the MTA: Is Good Signage a Bad Idea? 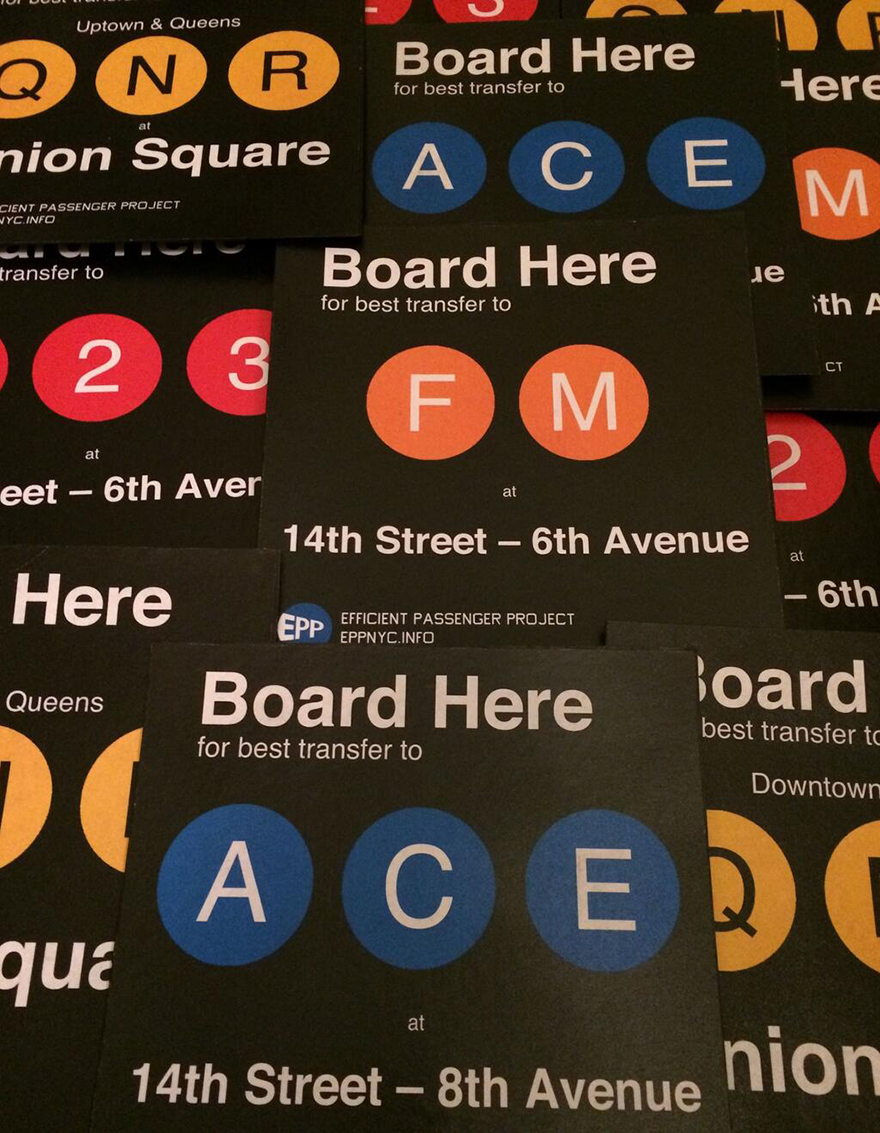 I just came from a Dunkin' Donuts, where some idiot left their bag and an iPhone on top of it completely unattended. The iPhone was charging, plugged into an outlet in the wall near the pick-up queue, which was well away from the tables; and of the folks seated at the tables, no one was bothering to keep an eye on the bag, even as a steady line of strangers moved past it. That wouldn't have happened here 20 years ago, when living in then-high-crime NYC actually required street smarts and common sense.

Common sense also has its place while not just riding, but boarding the subway. Every native I know with a regular commute has learned which I-beam to stand next to when the train arrives, in order to hit door X of car Y, which perfectly places you by the desireable stairwell Z when you exit, speeding your commute. But now the anonymous person behind the Efficient Passenger Project, as they're calling it, is seeking to install signs that do all of that work for you. By tracking which areas of the platform will line you up with particular transfers and exits, the EPP seeks to "[facilitate] a faster, more enjoyable commute."

From a design standpoint, the EPP has kept the Helvetica, in an effort to make the signs look like the MTA commissioned them. Which they haven't; and in fact, as the EPP surreptitiously gets the signs up, the MTA is just as quickly taking them down. Why are they opposed? The MTA cites it will unbalance the trains, leading some cars with desireable areas to be stuffed while others go empty.

I myself think the signs are a dumb idea. Regular commuters should be smart enough to figure this stuff out for themselves, and as for the tourists riding the subway for the first time, are they really in a rush? They're not, judging by the way they slowly traipse down sidewalks and platforms four abreast, blocking the passage of people who actually have some place to go.

Part of what made NYC, NYC was that it was once a tough place to get by in. People here were survivors, and if they weren't clever, they got clever, or else they washed out and moved someplace else where they could actually cut it. In short, I think a coddled New Yorker is no New Yorker at all.

(P.S. Guess what, stop walking around with your mouth agape and your nose buried in your phone, and your phone won't get snatched.)