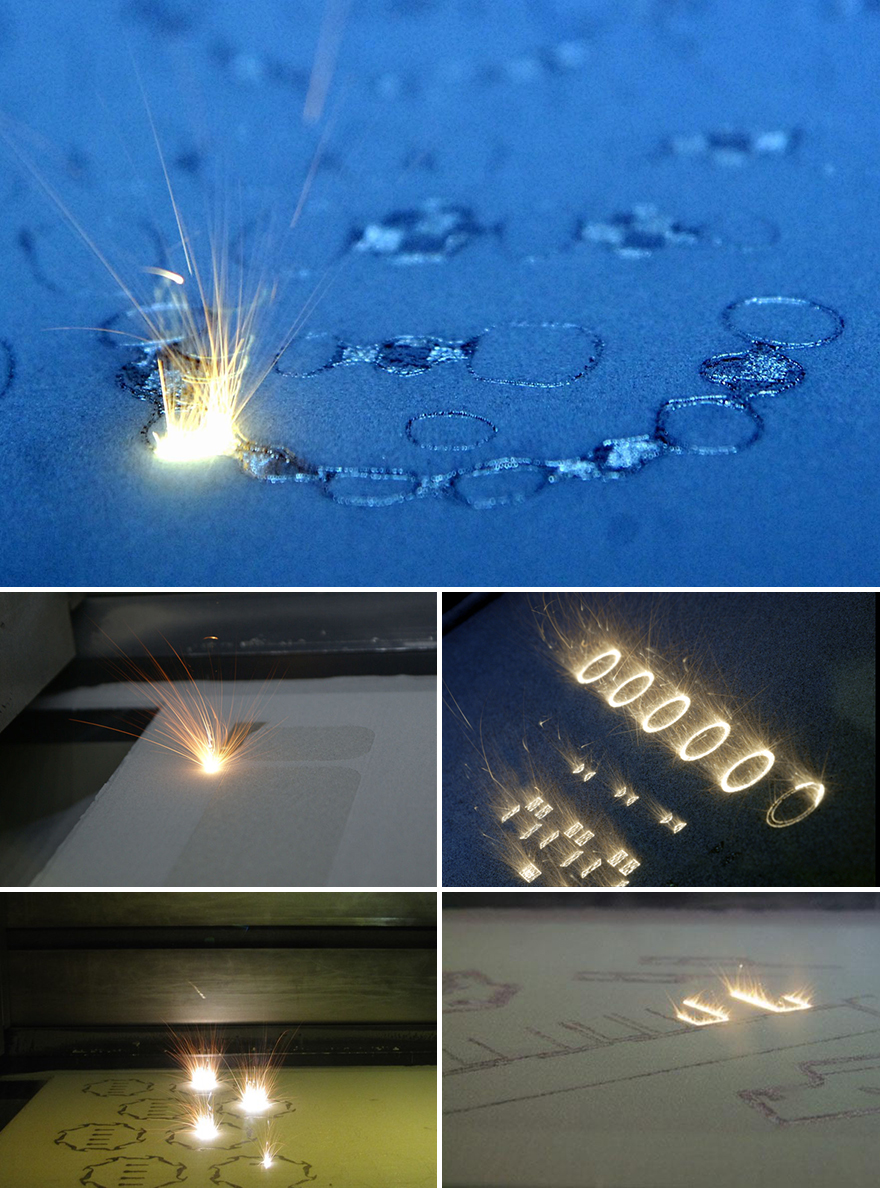 As an industrial designer, if you confuse extruding with embossing during a job interview or at an engineering meeting, you'll get some funny looks. But if you screw up the difference between laser sintering and laser melting, you're likely to be given a bit more slack. That's because there's a lot of confusion about the difference between Selective Laser Sintering (SLS), Direct Metal Laser Sintering (DMLS), Selective Laser Melting (SLM) and LaserCusing (no sexy acronym), and in fact, some vendors of these technologies themselves do not always draw clear distinctions between their capabilities. As conflicting information is being circulated, here we will attempt to explain the difference between the terms. (And hopefully those of you in our readership directly experienced with these technologies will sound off in the comments.)

First off, all four procedures follow the same basics:

1. A designer/engineer designs a part 2. Software cuts that part up into virtual slices on the horizontal plane 3. A chamber in the production machine is filled with powder 4. A laser runs over the powder, solidifying it and building up a thin layer of material 5. Layer after layer is built up from bottom to top, until the part is finished 6. The leftover powder is re-usable, leaving no wasteSelective Laser Sintering and Direct Metal Laser Sintering are essentially the same thing, with SLS used to refer to the process as applied to a variety of materials—plastics, glass, ceramics—whereas DMLS refers to the process as applied to metal alloys. But what sets sintering apart from melting or "Cusing" is that the sintering processes do not fully melt the powder, but heat it to the point that the powder can fuse together on a molecular level. And with sintering, the porosity of the material can be controlled.

Selective Laser Melting, on the other hand, can do the same as sintering--and go one further, by using the laser to achieve a full melt. Meaning the powder is not merely fused together, but is actually melted into a homogenous part. That makes melting the way to go for a monomaterial, as there's just one melting point, not the variety you'd find in an alloy. To nutshell it, if you're working with an alloy of some sort, you'll go SLS or DMLS; if you're working with say, pure titanium, you'll go with SLM.

As for Laser Cusing? Though there are some technical distinctions, it's essentially a trade name for SLM, something like Xeroxing is to photocopying. Further adding to the confusion is that DMLS might stand for Direct Metal Laser Sintering—yet "DMLS" is also a trade name for Selective Laser Melting. 3D printing consultant Joris Peels, who previously worked for both Shapeways and i.materialise, describes the distinctions between these technologies thusly:

Some people use the terms interchageably, others maintain that there are sharp differences between them and others think that it is just a bunch of Germans who used to all be friends playing word games in English.

...Essentially there were several companies and institutes developing these technologies and they had a falling out and now due to marketing and patent issues they all refer to the same technology by different names.

The one laser technology whose nomenclature all manufacturers can agree on is also the newest: DMSL, or Direct Mogul Skier Lasering, which recently made its debut at Sochi.

Yeah, I know, getting a lot of mileage out of that clip. Sue me.

Previously: There's More Than One Way to Additively Manufacture a Metal