Editor: Here in Part 2 of "Accidental Designer's" story, he engages in one of the more unconventional design/build educations we've ever heard of—and unwittingly lays the foundation for a big next step on his way to starting his own company.

If you're behind on this tale, you'll want to catch up with Part 1 first.

It amazes me that those of you in design school learn your craft in four years. Since I had no plan, I spent well over a decade building up my skillset and learned a lot of things the hard way, though I don't regret a day of it.

After graduating high school I had no notion of design as a career, and more immediately I knew college wasn't for me. Neither was staying in my mom's house. So at 18 I moved out, and started living on a derelict wooden sailboat that my brother and I had bought with money we'd saved up working for my dad.

With every dollar we had spent on the boat, there wasn't anything left over for paying for a space to dock the boat. So my brother and I became experts at "the slip-around," where you'd find a slip someone had recently vacated, then dock the boat there. Eventually Harbor Patrol would realize your boat was in a slip that someone had stopped renting, then you'd get towed to the impound dock. But it didn't take a genius to figure out that paying a $35 fine a couple times a month was a helluva lot cheaper than the $300 monthly rental fee.

I supported myself using the skills I'd learned under Mr. Barkington in that hellish Shop class, particularly that last big boat restoration job. I had also taught myself some new tricks through trial and error, and I talked some folks into hiring me to restore their boats. With the money I saved I was able to buy some boats of my own, real junkers, but I'd live in them, restore them, flip them, then buy another, rinse and repeat. That worked out pretty good. 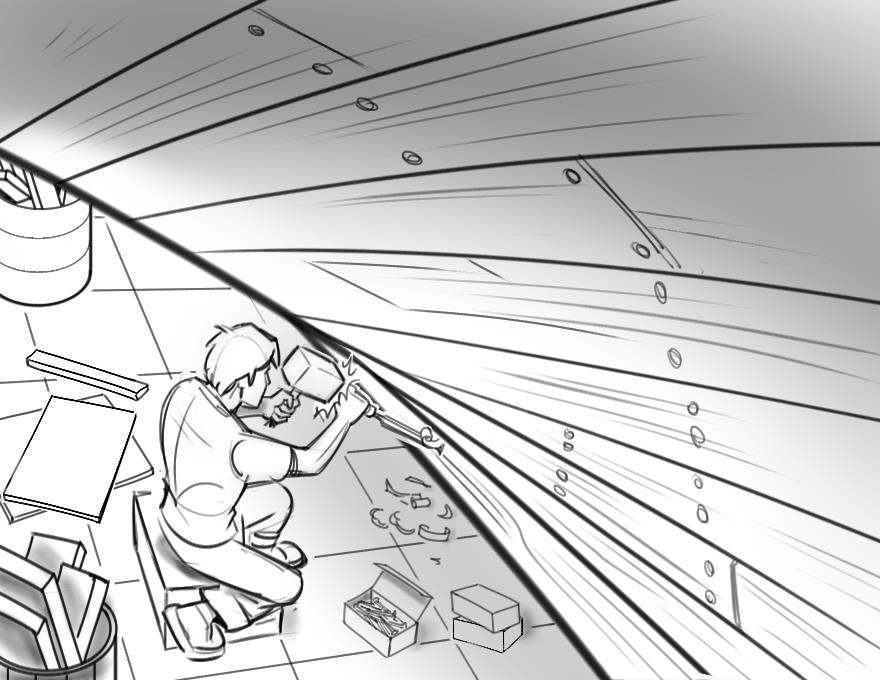 People got to know my face around the marina, and I got hired to do odd jobs around the place. Instead of the Harbor Police writing me tickets, I became the guy they'd call if a boat was sinking in the harbor, and I'd go pump it out. If someone showed up in the middle of the night for an early-morning haul, I'd help them get set up. Because I was there practically 24-7, I became the boatyard's de facto security.

Eventually I caught the attention of the local boatyard. They had this old-school shipwright, a really crusty old-timer who wanted to retire, and he needed an apprentice who could keep the work up. I'll call him Mr. Wright, and I'll tell you that this guy made Mr. Barkington look like a kind, nurturing soul.

But I wasn't there for praise, and apprenticing under an old-school guy like that, who really knew his business, was one of the best educations I could get. Soon I was living in the boatyard with my own, legal, slip. And for the next eight years Mr. Wright taught me proper process and procedure, along with a system of wood joinery that was centuries old. He taught me how to balance following tradition with thinking on your feet. I got to use all kinds of unusual shipwright's tools, like a handplane with a bowed, springy bottom so you could plane concave surfaces, tools the likes of which I never saw before or since. He had this special kind of adjustable "story stick" that he used to measure windows, he called it a "Preacher stick." I asked him why and he looked at me like I was an idiot and said "Because it never lies." 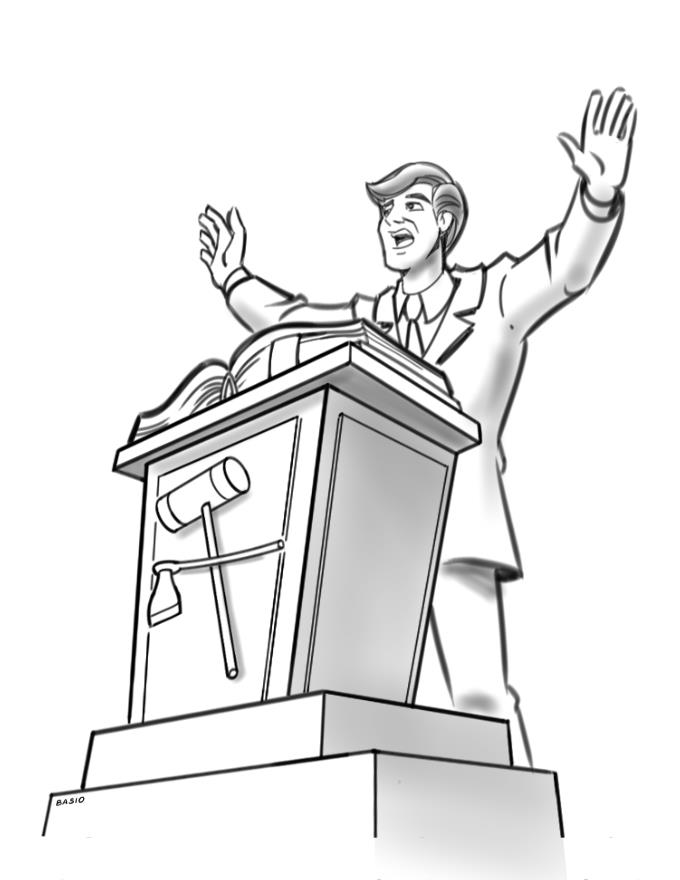 After Mr. Wright finally retired, I became the boatyard's resident shipwright. (By the way, one lesson Mr. Wright taught me was that you can't call yourself a shipwright--you're only a shipwright when other people refer to you as a shipwright. Maybe the same should be true of designers? In any case, now you know why I call him that.) And I'd also started hustling things on the side; like I'd hear about some guy selling a garageful of teak, so I'd go buy up the whole collection, then slowly sell it off to guys around the boatyard. (My truck and some of the wood actually got stolen while I was picking it all up, but that's another story.)

And it's a good thing I had so much of that teak, because it helped out with a few disasters I had. There was one job I had to do the cap rails on an 80-foot sailboat. The cap rails are the ones that run along the sides, from bow to stern. I came up with this beautiful design where I'd join eight ten-foot sections of teak on each side, using this complicated joint that looks like a lightning bolt with a square peg in the middle to lock it together. But I couldn't figure out how to glue the damn things up in place. So I laid it all out on either side of the boat, which was in drydock, and did the glue-up down on the ground. After giving it time to dry, I then hired 15 guys to help me lift each side up into place; I'd calculated I needed 16 bodies (including me) to lift it up evenly.

So I laboriously undid all of the clamps, then got everyone into position.

And we all lifted this 80-foot cap rail in one beautiful, synchronized motion.

And then the entire goddamn thing fell apart.

I'd given the glue ample time to dry, so I couldn't figure out what went wrong. Then I realized that I'd applied epoxy, Side A, to one side of the joints. And on the other side I'd applied...epoxy, Side A. Brilliant. I'd completely ruined the 160 feet of teak it had taken me forever to shape, and I became the laughingstock of the boatyard for at least the next year.

But luckily, no clients had been on hand to witness that particular disaster. So this is where the design comes in. As I mentioned I'd started getting my own commissions. There'd be, say, some rich couple that just bought a boat, and they wanted it customized, and the boatyard would send them my way. And I'd make a plan with the boat owners to go out to dinner together and talk about their project. 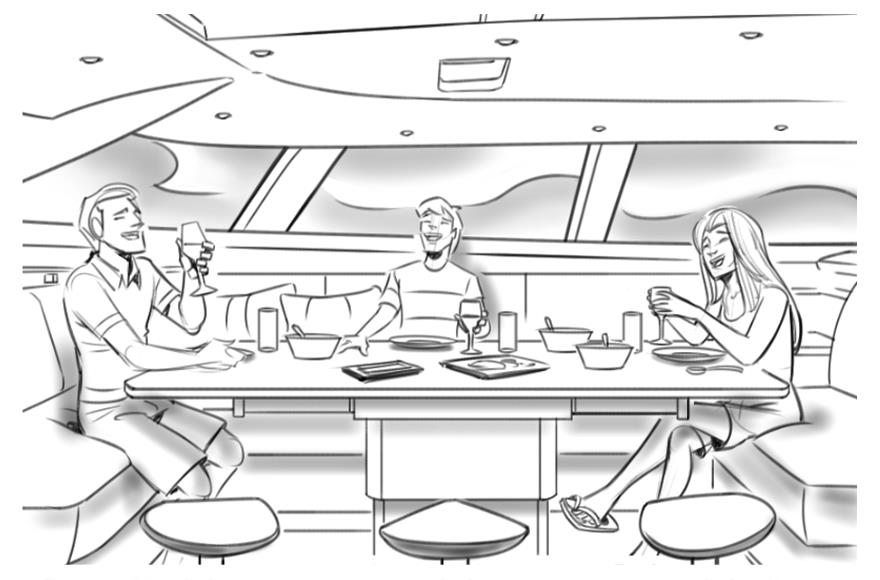 I didn't realize it at the time, but those dinners were essentially combination client-briefing and design-brainstorming meetings, filled with plenty of lobster and top-shelf rum. (As my reputation spread, I had no shortage of clients happy to wine and dine me. Didn't see that one coming.) I had a genuine curiosity for people, so while we ate and drank I'd ask them all about themselves. And once you got them talking and learned their interests, you knew what kinds of designs you needed to provide for them.

Sometimes it was obvious stuff, like you find out that the husband likes playing poker with his buddies, so you hook up a built-in casino-style card table in the cabin. But a lot of times people don't know what they want, and it's your job as the designer to figure it out. Sometimes me and the clients would be well into the third round of drinks before the wife would start spouting off about how much she hated their kid's music. So I'd think about that before I fell asleep that night, and the next morning I'd come up with a design that incorporated built-in headphone jacks every five feet in the cabin, so the missus would never have to hear Junior's heavy metal.

Speaking of missuses, I didn't have one of my own, I wasn't married. But twice a year they had this big craft festival over at Hermosa Beach, and my buddies and I would go to look at the girls. My God, but some beautiful women would show up to these things.

However, it wasn't a woman that caught my eye at this particular craft festival: It was a chair. The guy who had made them was selling them out of a booth and they caught my eye. With all of my experience in building, my eyes ran over this chair and I could clearly visualize myself crafting every single piece of this thing. I knew I could make them—and I damn sure had enough teak—and I knew I could sell them like hotcakes to my boat design clients.

There was just one problem: This chair was someone else's design.

I then made a fateful decision, one that was going to come back to bite me in the ass. 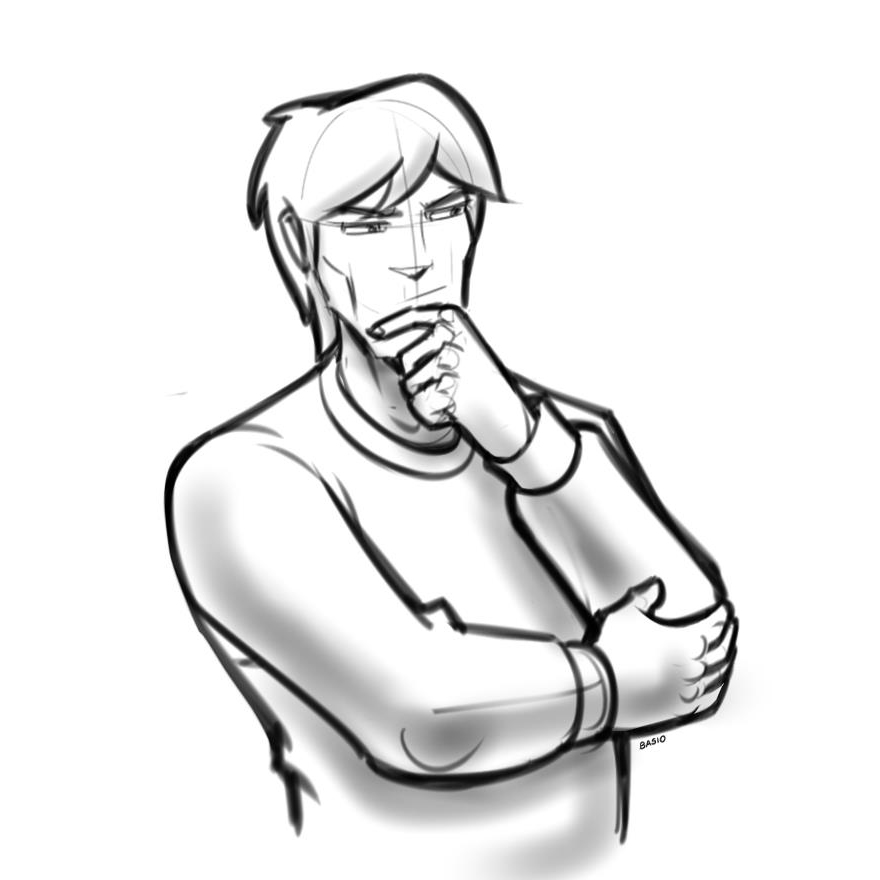