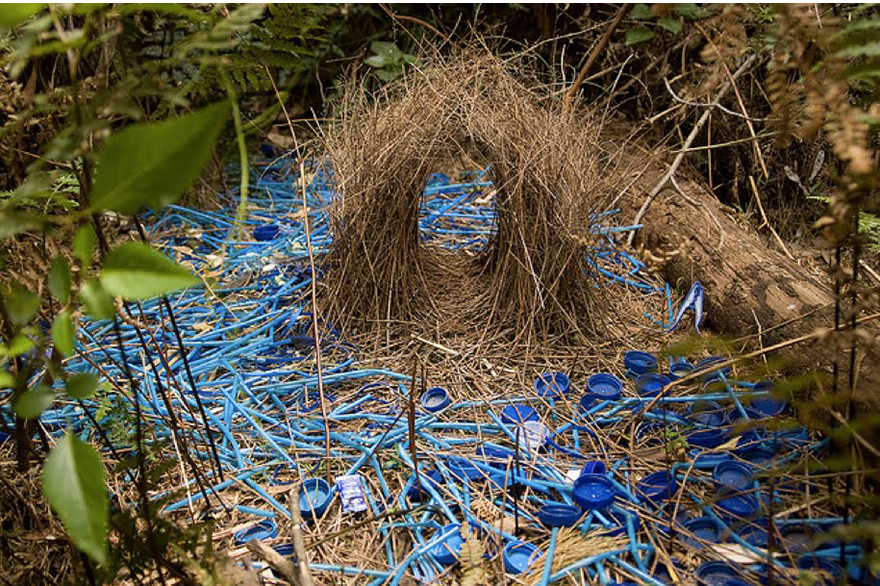 Turkeys strut, peacocks preen, and bowerbirds design. Of all the strange things that male birds do to attract a mate, the bowerbird's ritual is the only one that could make it into the MoMA. They use two distinct types of "architecture" and have a keen eye for color as well. 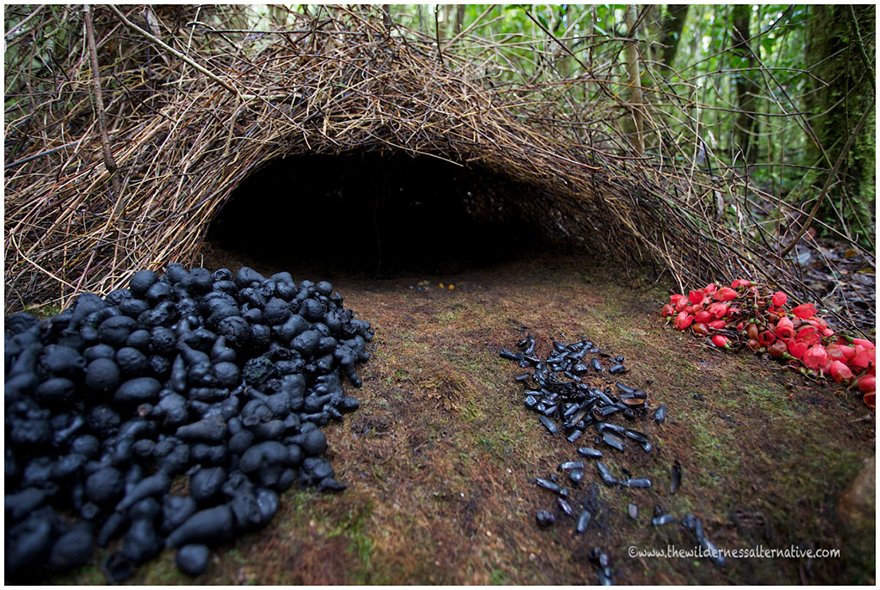 Once mating season rolls around, these Oceanican birds start gathering sticks and using them to erect structures called bowers. Amusingly, the bowerbirds pick one of two architectural styles, depending on their subspecies. One type is a "maypole" bower, where the sticks are arranged around a sapling to form a kind of teepee or cave: 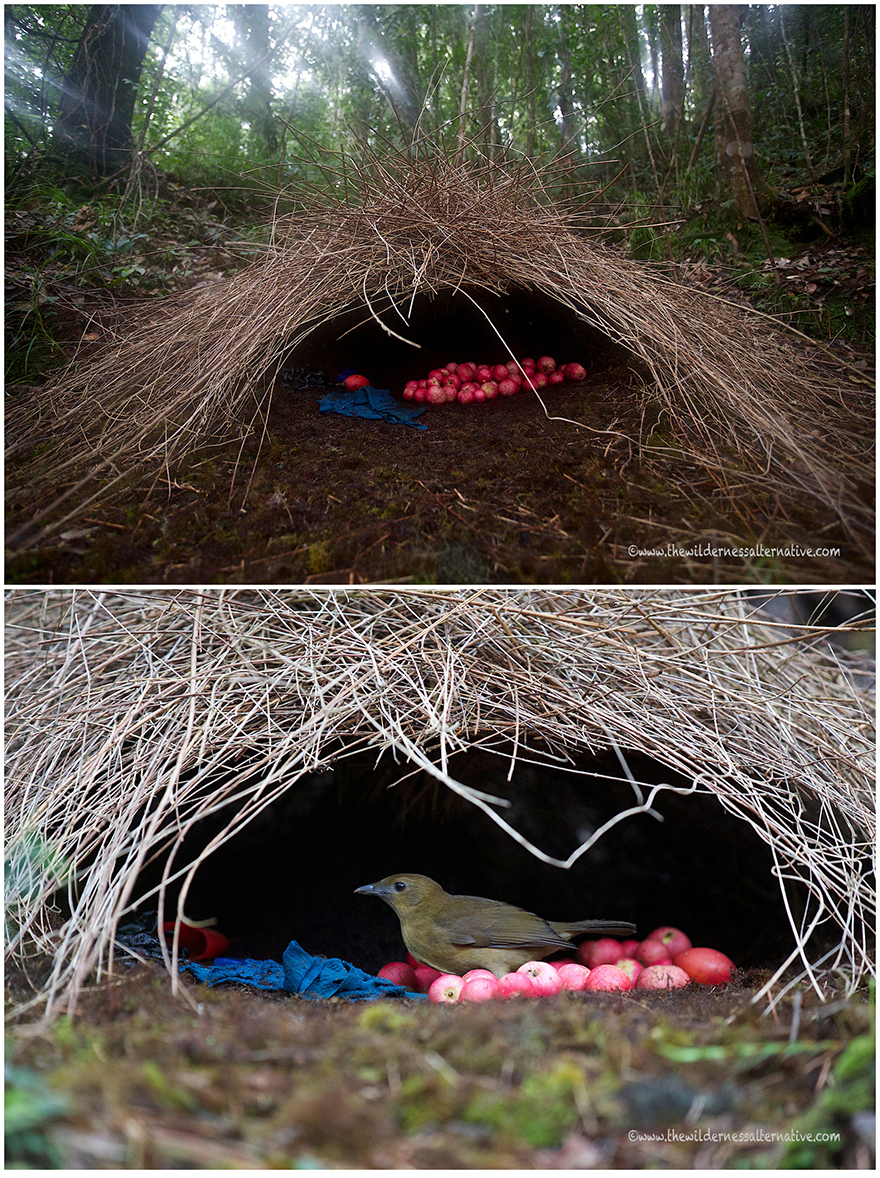 The second is an "avenue" bower, where the sticks are arranged vertically to make a path down the middle, like something you'd see a bride and groom walk through at a wedding venue. 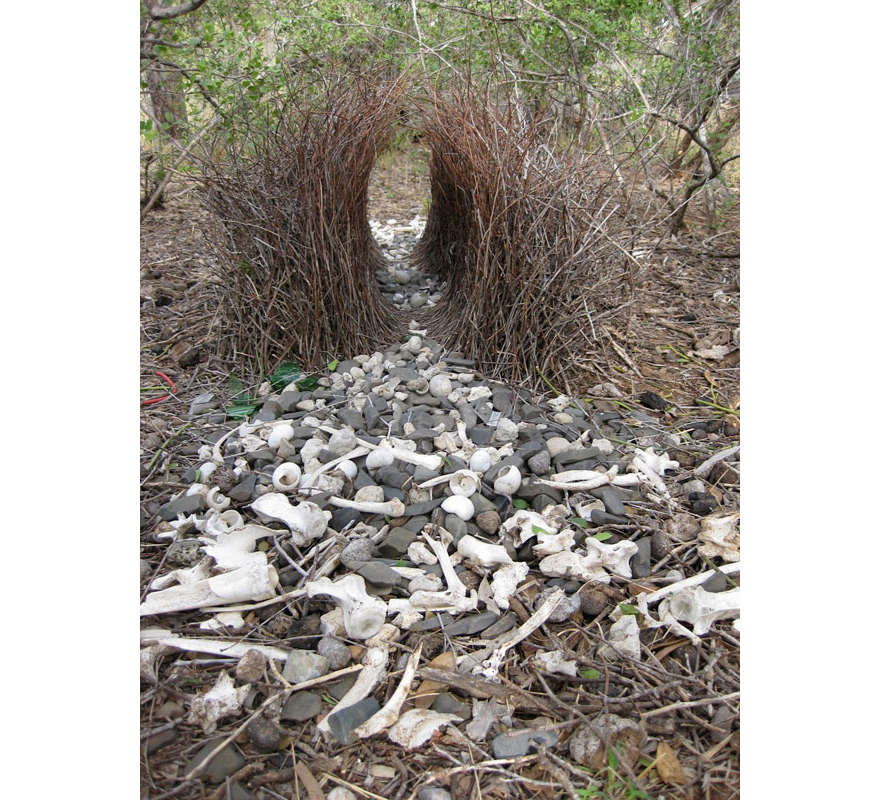 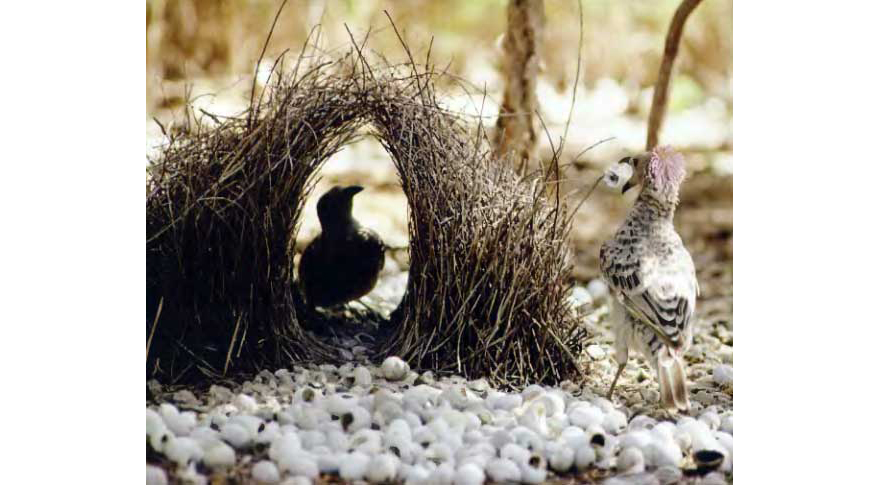 Even crazier, they then start decorating the area around the structure using colored objects. Some of them dig a little variety: 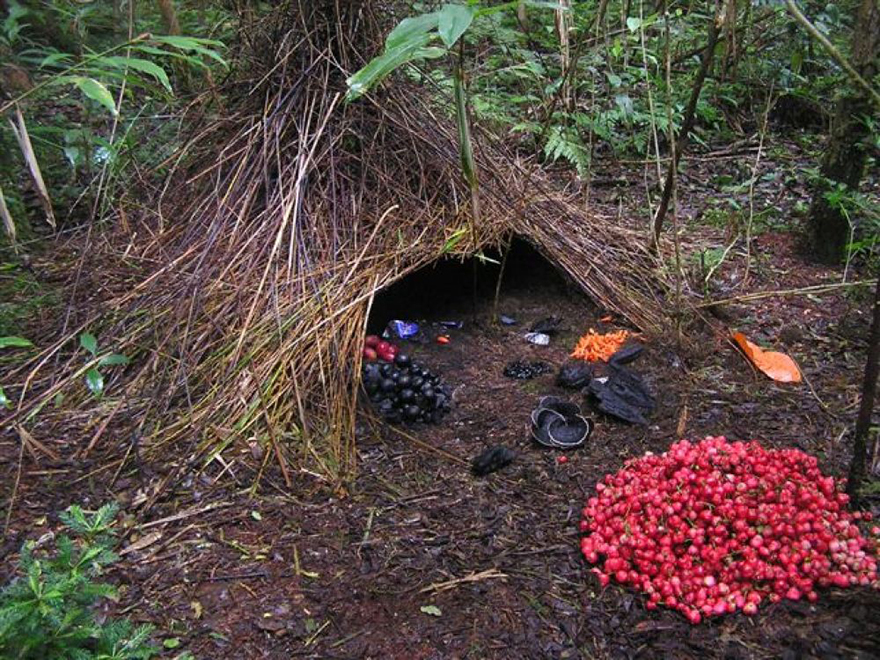 Others stick with one color—and will even use manmade objects as long as they match, like Bic pens and bottlecaps: 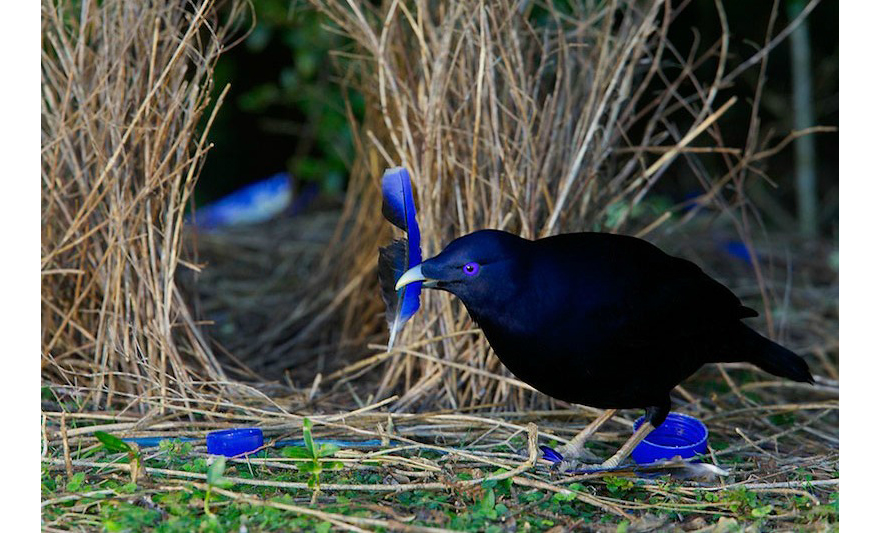 Some of them have downright bad taste, like this poor bowerbird bastard with no color sense: 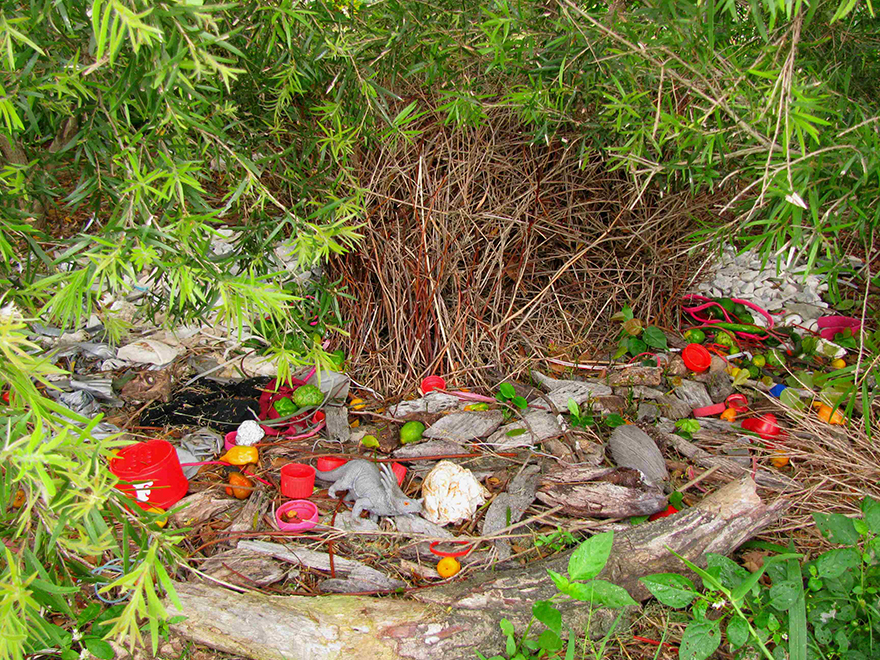 Then you've got the black turtleneck crowd, who keep it monomaterial and aesthetically stark: 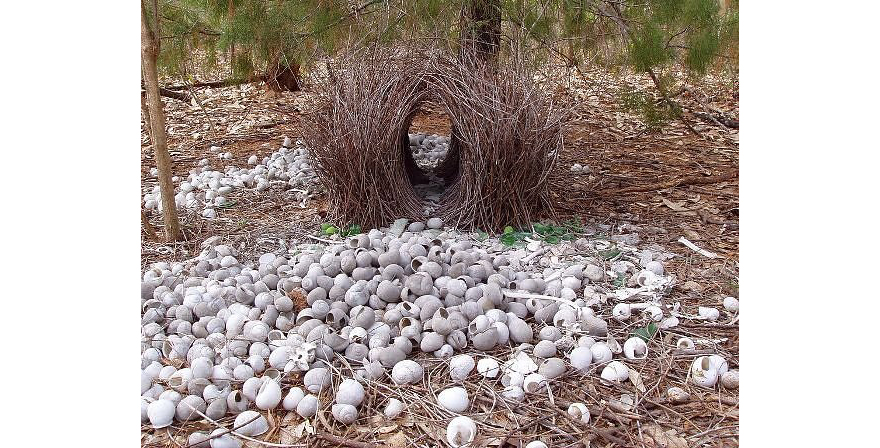 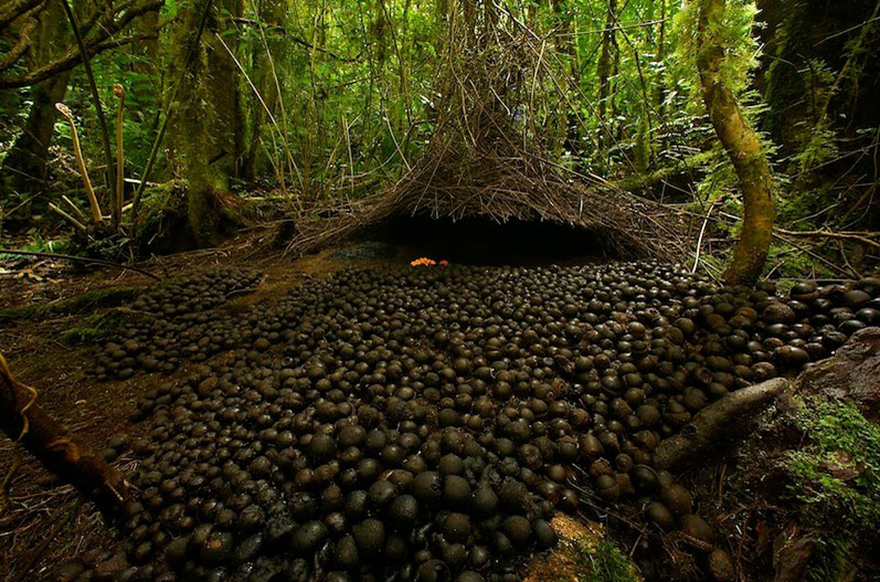 This guy, presumably disgusted with his haul of plastic bottlecap rings and a toothbrush has given up and resorted to outright bribery:

Here David Attenborough and the BBC capture some great footage of a "maypole" bower being attended to:

As you can see, the elaborate bowers are simply meant to attract females to the site. Once they land, the male starts puffing himself up and doing that ridiculous dance in an effort to seal the deal. Acting like a male jackass, it seems, transcends all species.