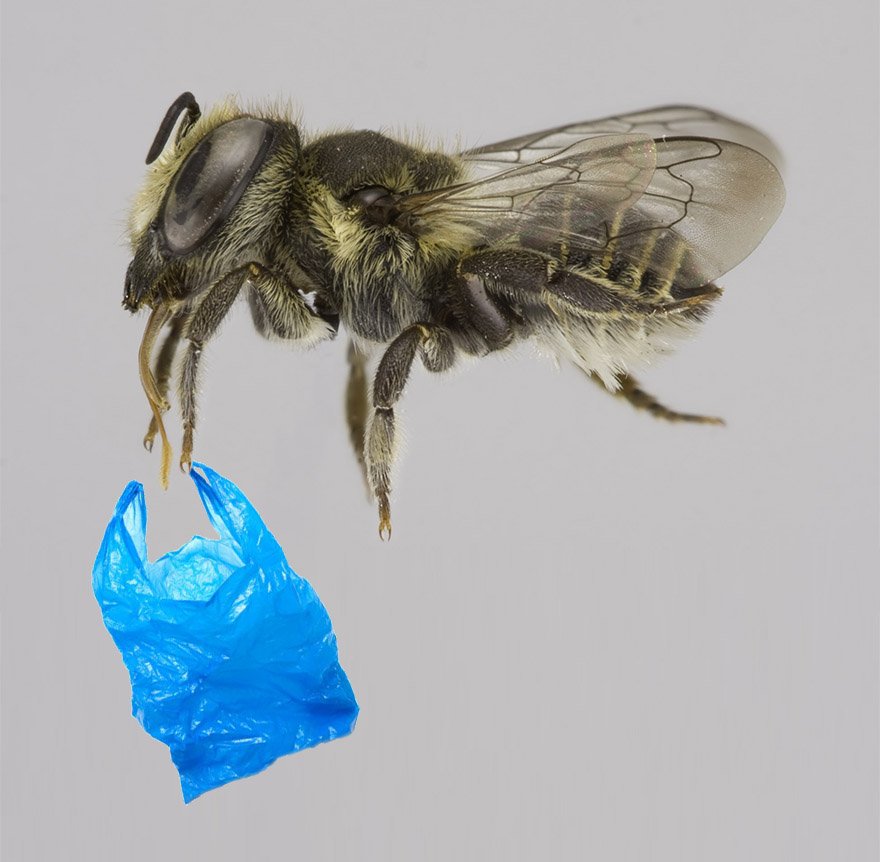 As cool as it is to see birds using manmade objects to decorate their lovenests, it's a little heartbreaking. But the reality is that the wilderness is strewn with refuse, hence bottlecaps and Bics go onto the B.O.M.

Well, turns out it's not just bowerbirds, but also bees that make use of human garbage—specifically, plastic—to spruce up their digs. The Ecological Society of America has released a paper entitled "Bees collect polyurethane and polethylene plastics as novel nest materials," detailing York University researcher J. Scott MacIvor's discoveries on the subject.

...Furthermore, since plastic pieces were found in combination with leaves in brood cells, and found only near the end of the cell series, bee naivete does not appear to be the cause for the use of plastic... It is interesting to note that in both bee species, the type of plastic used structurally reflects the native nesting material, suggesting that nesting material structure is more important than chemical or other innate traits of the material.

Interestingly enough, the usage of plastic as a nest component has both positive and negative effects on the hatching of brood. The parts of the nest made up of plastic tend to store moisture, and mold building up in those areas killed up to 90% of the brood; but on the plus side, the plastic kept parasites away from the brood, as the pests "were unable to sting through the plastic wall."

MacIvor points out a similar finding to that latter part, concerning house finches. When these birds use discarded cigarette butts to build their nests—gross, I know—the nicotine inside them tends to keep parasites away.

I can't decide if it's sad or exciting that animals and insects are finding ways to repurpose human garbage. But it will presumably continue, and at the very least, this puts quite a different spin on parents teaching their kids about the birds and the bees.