'Print the Legend,' First Feature-Length Documentary about 3D Printing to Premiere at SXSW 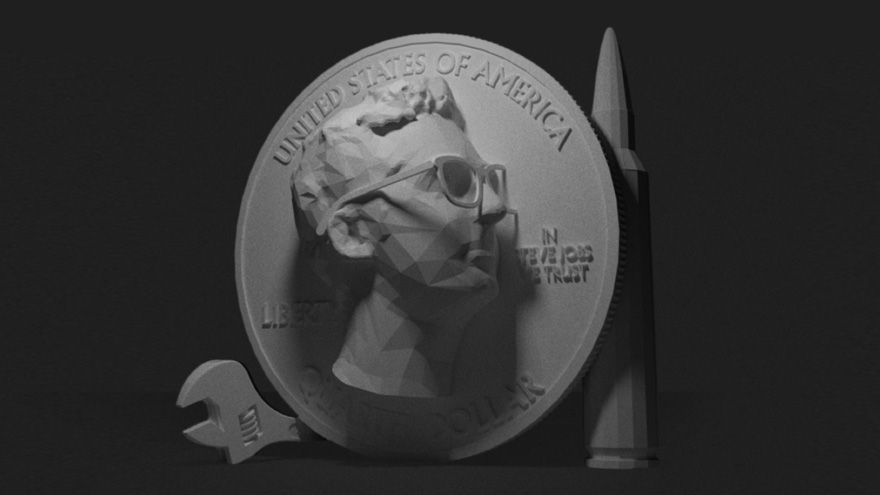 You heard it here first: "3D printing is having its 'Macintosh moment.'" So says the team behind a new full-length documentary on the subject, directors Luis Lopez and Clay Tweel and producer Steven Klein. Hollywood Reporter fills in the blank: Pettis is the Steve Jobs of the movement, a shorthand for an upstart who will bring us a product that we never knew we needed through sheer force of will. (Meanwhile, the colossal quarter that he has rendered for the website and poster features his face instead of one of our founding fathers, casting Jobs as none other than God.)

Print the Legend will premiere at SXSW Film Festival this weekend with a handful of screenings in Austin, and if the forthcoming dates are TBD, at least the press materials include a selective history of 3D printing. Between the trailer and milestones listed below, it looks like there's definitely a narrative arc to the documentary...1986: 3D Systems invents Stereolithography (SLA)—which uses a laser to cure liquid plastic in precise layers that can build up an object—to print the first 3D- printed object.

1989: Stratasys invents Fused Deposition Modeling (FDM), which uses a fine- tipped "hot glue gun" on a robot arm to deposit plastic layers onto a platform that lowers in very fine increments, building up an object.

2009: In the wake of the open-source RepRap community that rises up after FDM patents start to expire, Zach Hoeken, Adam Mayer and Bre Pettis launch Thingiverse, an online repository for sharable digital designs. Zach, Adam and Bre form MakerBot Industries.

Summer 2012: In the wake of the Sandy Hook massacre, MakerBot removes gun files from Thingiverse. In response to his files being removed, Cody Wilson launches DEFCAD.

October 2012: Formlabs breaks records when it raises $2.9 million on Kickstarter.

May 3, 2013: Cody Wilson prints and successfully fires the world's first "fully" 3D- printed handgun. (In fact, the pistol—dubbed The Liberator—requires a normal household nail as the firing pin.)

May 5, 2013: Cody Wilson posts video of The Liberator firing on YouTube and uploads the gun's design files to the Internet.

May 8, 2013: U.S. State Department demands that Cody Wilson remove his gun files from the Internet, charging him with violating arms export statutes.

Suffice it to say that we'd be curious to hear about the film, if anyone happens to make it to a screening.

'Print the Legend,' First Feature-Length Documentary about 3D Printing to Premiere at SXSW