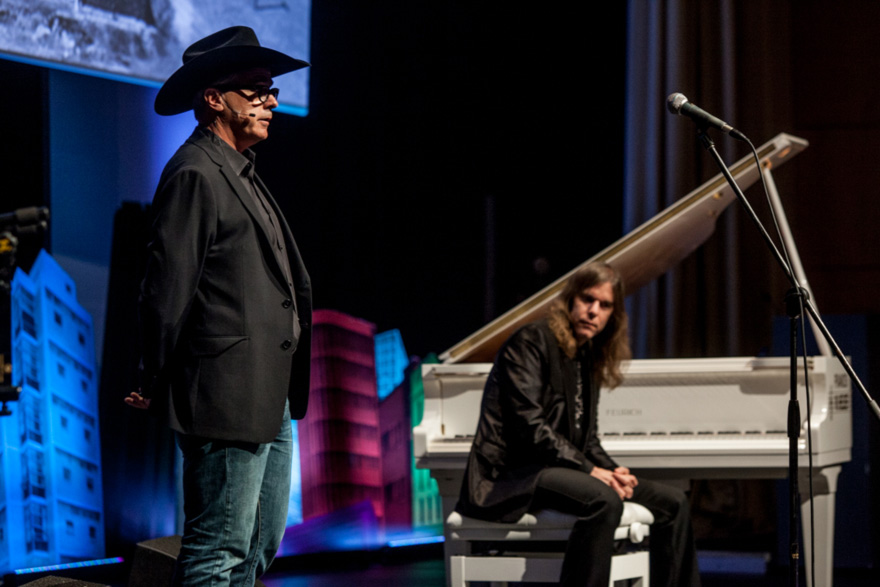 For those of us who were a bit groggy from that killer combination of jetlag and one nightcap too many, the first speaker on Day Two of the 2014 Design Indaba Conference was a trip, as though he'd clicked the metaphorical spurs of his boots to transport us not to Kansas but a nearby state. Indeed, DJ (née Doyle Jr.) Stout's talk was vaguely dream-like, featuring sobering statistics about the 2011 Texas wildfires, footage of a cattle drive, a Pecos League baseball team... and, of course, cowboy poetry. Somehow, it was the last bit that tied it all together—and to Stout's personal and professional history: A third-generation Texan, he made his name at Texas Monthly—you can see some of his work in their archive—and has been a partner at Pentagram since 2000. Stout has been based in Austin for most of the 30+ years that he's been working as a designer and he's met some interesting people along the way, including musician Graham Reynolds, who kept him company on stage, performing original piano compositions during the moving video interludes. 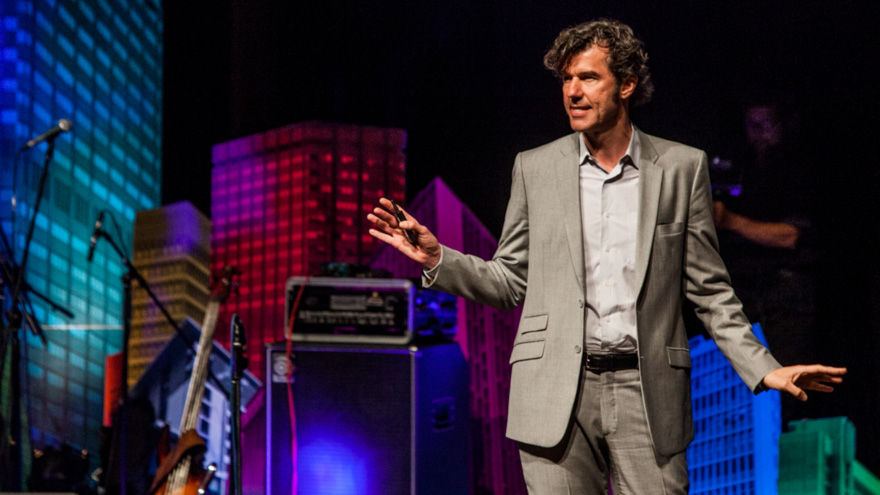 If Stout's presentation was as earnest as they come, the final speaker of the conference was rather more tongue-in-cheek with his delivery of what might be described as a well-practiced presentation to a full house last Friday. Stefan Sagmeister should need no introduction (at least not according to MC Michael Bierut) and—even if a refresher would have been nice—he did not provide one, instead commenting on an infinitesimally subtle heat pattern on the projector screen before launching into his popular 'Happy Talk.' Sagmeister has apparently been evangelizing (for lack of a better term) on the topic for at least a few years now, and I heard mixed feedback from conference-circuit veterans who knew better than to expect anything new. He acknowledged as much with a wink and a nod during the climactic sing-along portion of the talk, leading the audience in belting out the line "seen it all on TED.com." 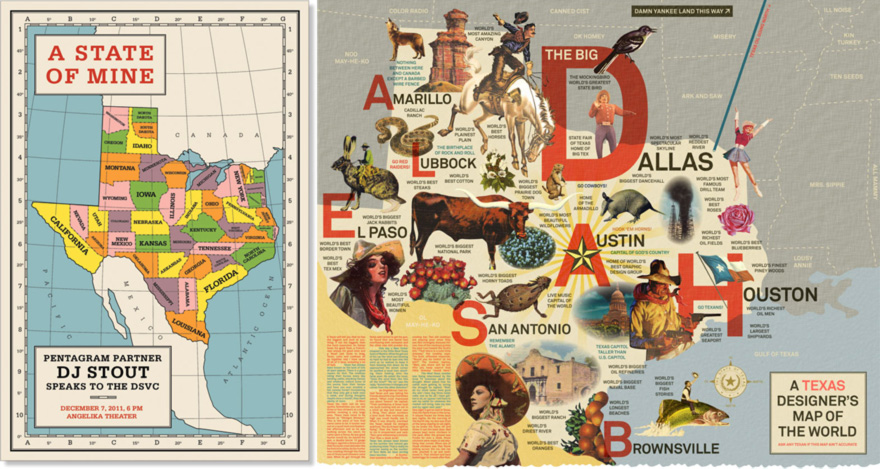 In short, the presentations were polar opposites. Stout shared an honest exploration of heritage and the pride of place; Sagmeister's pseudo-science project is both the product of and the premise for his various modes of self-expression. Stout is certainly more worldly than he let on in his presentation—he lightened the mood with a few one-liners throughout—but the fact that he spoke in his natural voice, which lacks a discernible Texan accent, only underscored the candidness of his talk. Sagmeister, on the other hand, limited the scope of his presentation to the work in the Happy Show—clever, often quotable, and always beautiful, but somewhat lacking in substance: a dose of visual culture for the here and now. 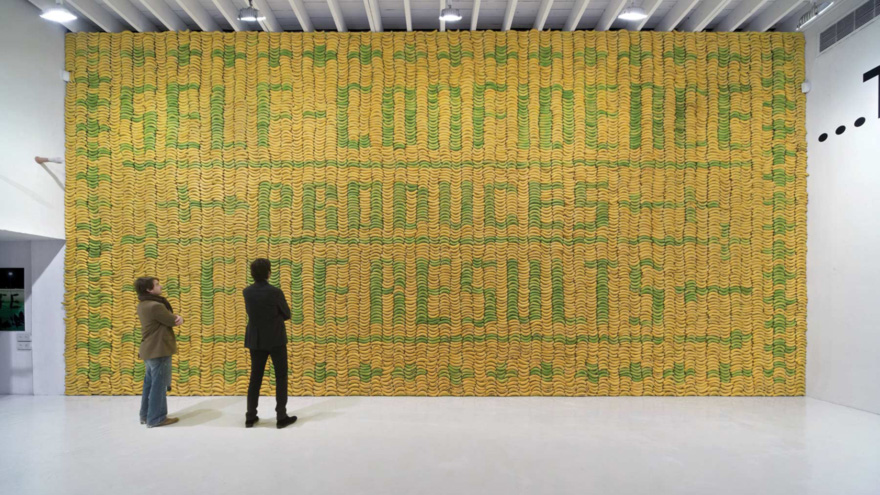 Of course, a dark sense of humor is not merely an M.O. for Sagmeister, who neatly dispensed his calculated wit in single-serving pills—after all, the very notion of "pursuit of happiness" is codified in American consciousness for more than two centuries and counting. Indeed, Stout has a major advantage in this department; his Texan bravado represents a more concentrated strain of kitsch, characterized by the endearing sincerity that comes with the territory. Even the videos of impressively mustachioed cowboys reading their poetry didn't come anywhere near the profound irony at the heart of Sagmeister's presentation, which opened by borrowing Freud's conceit to transform "utter misery" into "common unhappiness."

Yet the fact that Sagmeister is clearly familiar with the work of his fellow Austrian suggested a curious sense of time and place from the outset, per Stout's assertion that he could ballpark such origins in the work of his colleagues at Pentagram. (Besides the Pentagram Papers projects, for which the proceeds went to charity, Stout also shared a passion project, a book about a storied Texan baseball team.) Conversely, Sagmeister's oeuvre, as a whole, is a remarkably felicitous answer to Stout's quip about his father's take on graphic design practice: "Don't we have a computer for that stuff?" 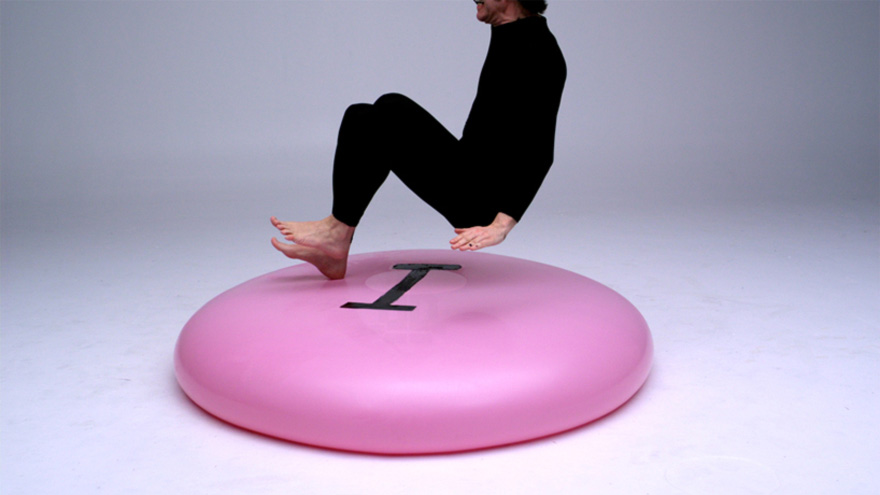 ...and the massive cushion of irony turns out to be a giant water balloon, bringing the message full circle. Sagmeister's ruse is that the 'man on the elephant'—the conscious mind attempting to harness its unconscious instincts—has undertaken a Sisyphean, if not altogether futile, mission. Although Sagmeister's time-lapse typography is rather more ephemeral than Stout's heartland imagery, the elephant-riding seeker is not so different from the cowboy on his steed. 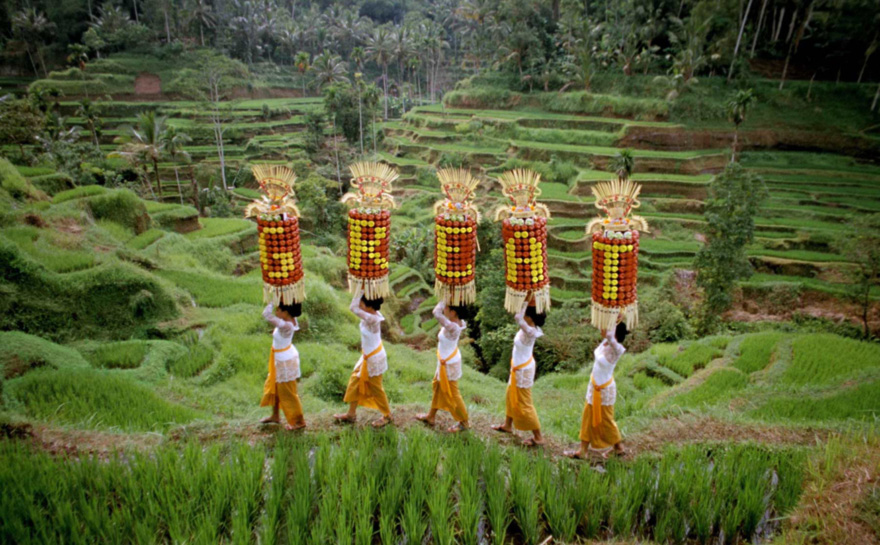 Among the platitudes that Sagmeister saw fit to omit? "Ignorance is bliss." Although I was familiar with the Happy Film and some of the work in the exhibition, I personally hadn't seen his presentation before and I genuinely enjoyed it. Fleeting though the sensation may be, the conference ended on a happy note, and I should hope that my fellow audience members at Design Indaba shared the sentiment.

Design Indaba Conference 2014:
» New Talent from Around the World
» Jake Barton of Local Projects on his Prototype-Intensive Process
» Spotlight on Thomas Heatherwick
» Sagmeister & Stout
» Experimental Jetset and Alt Group's Dean Poole
» Naoto Fukasawa on the Future of Product Design (Which May or May Not Include Bentleys)