In the Details: Behind One Company's Decision to Use a Waste-Oil Furnace for Metal Casting 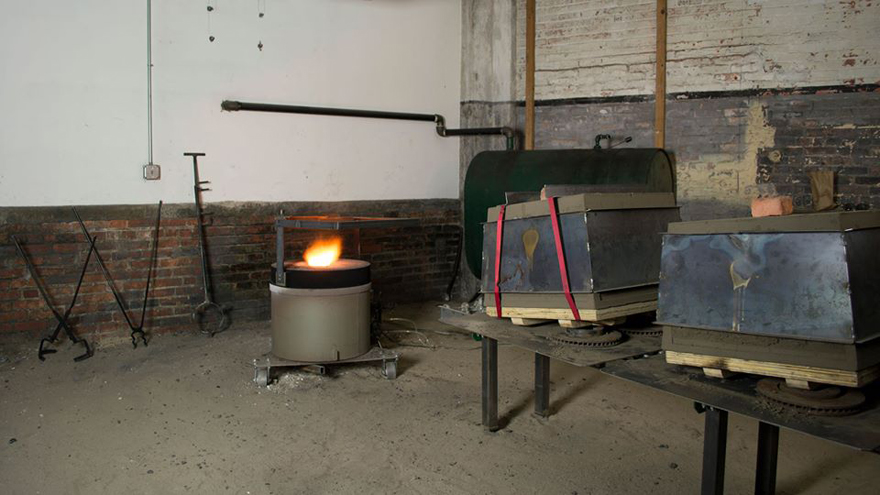 Based in Syracuse, New York, Borough Furnace is a small metal-casting workshop founded by cousins John Truex and Jason Connelly. The crux of their operation is the Skilletron, a custom crucible furnace now on its fifth or sixth iteration that melts scrap metal by burning waste vegetable oil.

Truex was first introduced to the world of iron casting via a small cupola furnace, a miniature version of the old coke-fired furnaces that were the staple of industrial iron production for a long time. "Now most U.S. iron production is done in large electric induction furnaces; a lot of Indian and Chinese iron production is still done with large coke-fired cupola furnaces," Truex says. Wanting to create a small batch of cast-iron goods like skillets and bottle openers, Truex and Connelly looked at a variety of furnaces and manufacturing options to see what would make the most sense.

The duo discovered that for the same amount of money they would need to spend on tooling for overseas production they could build out their own micro-foundry and prototyping studio in the States that would also allow them to explore new cast-iron products and objects—retooling and making their own production molds for each new piece. Investigating further, they found that existing cost-effective furnaces like cupolas were restricting in their ability to only cast iron and types of bronze; also, because of the coke fuel, they were extremely dirty. But more expensive crucibles, which can melt aluminum or any other metal cleanly, proved unacceptable in the amount of pollution and fuel the process requires.

"The waste vegetable-oil furnace was the next step, and the initial design was based on a few different home-published books about waste-oil furnaces, notably those by Colin Peck and Steve Chastain," Truex says. "Where our furnace diverged from the 'backyard casting' predecessors was in trying to get the iron hot enough to pour thin-walled castings [for skillets] and in making it repeatable and consistent." Thus was born the Skilletron.

In 2011, Truex and Connelly turned to Kickstarter to raise the funds needed to build their WVO furnace and micro-foundry in upstate New York. Thanks to 193 backers, the cousins raised $32,540 and were able to build out the custom machinery that would be the foundation of Borough Furnace.

The Skilletron is made up of a burner and furnace body. The crucible, a clay-graphite container that holds the molten metal, sits on a plinth in the center of the furnace, while the burner fits through a hole in the side and sprays heated, atomized vegetable oil into the space around the crucible. The WVO mist combusts inside the furnace, heating the interior to 2600 degrees Fahrenheit. "I've tested and revised many different burner configurations; right now I'm using a modified home heating-oil burner that has been outfitted to spray WVO rather than HHO [home heating oil], and to burn at a much higher temp than a standard residential boiler," Truex says. "Revisions to the body of the furnace have been made in order to get better insulation and to last longer under the extreme conditions inside the furnace." 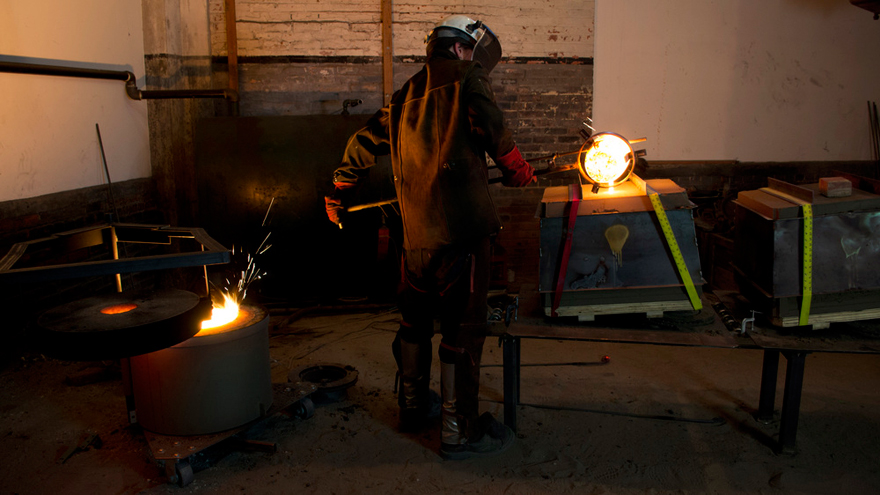 With each iteration, the Skilletron gets increasingly more efficient and easier to control. The first version of the furnace body was made from a mixed dough of sand and fire clay; it held up for lower temperature melts (aluminum or bronze) but melted itself in superheated iron temperatures. In the latest version of the Skilletron, the body is a high-tech version of that initial structure—high alumina refractory that gets packed into a form and baked in a kiln. Made up of several layers, the cylinder has an interior made to withstand the internal temperatures and an outer shell of lighter refractory with air bubbles that create insulation and increase efficiency. Once the scrap iron is melted inside of the furnace, the crucible is removed and the metal poured into sand molds to create the castings.

As for that waste vegetable oil, Truex and Connelly source it from local Syracuse restaurants—and, of course, from a friend's food truck that parks outside their shop. "We operate on a small scale compared to most foundries, but an induction furnace of comparable size would still require a 100-kilowatt power supply," Truex says. "By using waste vegetable oil as a power source, we're holding ourselves accountable for our energy consumption."

In the Details: Behind One Company's Decision to Use a Waste-Oil Furnace for Metal Casting