In this series, Matthew Sullivan (AQQ Design) highlights some designers that you should know, but might not. Previously, he looked at Donald Judd's furniture designs.

Alan Buchsbaum was a key figure in three significant, consecutive design phases: Supergraphics, High-Tech and postmodernism. An upwelling of a particular style is a communal affair, though probably really only caused by the few people that have the strength to erupt it. That strength seems to require a love and care of precedent, as well as a commitment to synthesize this knowledge into a material form. From the expressed synthesis usually blossoms what is termed a "new" style. In the case of Buchsbaum, his career took its first real form with the congealing of Supergraphics in the late '60s. Supergraphics was a style of design (most commonly realized with interior decorators and architects) where large-format text, blown-up photographs and/or oversized patterns were superimposed onto buildings or interiors to effect an augmentation of a space. The augmentation, however, is purely visual, with zero physical change to the actual structure. Perhaps Supergraphics is best understood as a marriage of ad-hocism and pop art—taking ad-hocism's additive collage technique but eliminating its often folksy handmade quality by tightening it up with pop art's assimilation of large-scale advertising. Buchsbaum had many designs that promoted this approach. His use of a giant, blown-up photo of a pink rose blossom is completely paradigmatic of the Supergraphics method—and, to my eye, perfectly beautiful. 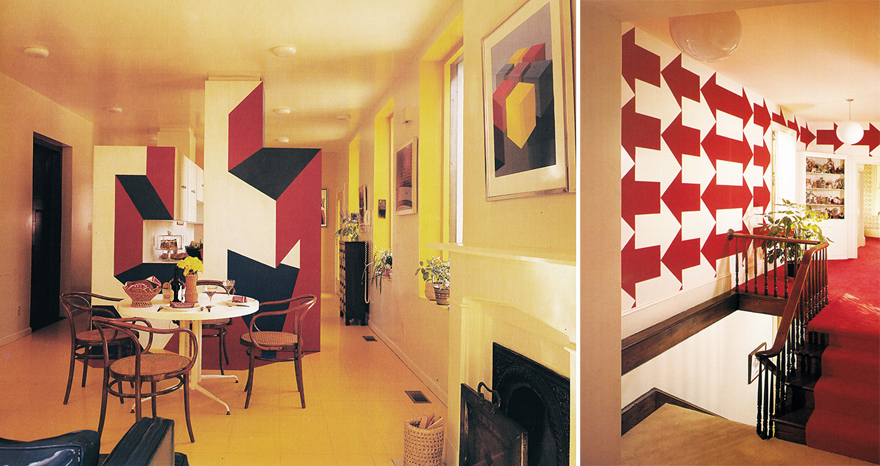 Above: interiors for the Tenenbaum house (1972). Top image: a Buchsbaum kitchen from 1978 (left) and a 1980 bedroom with a custom platform bed 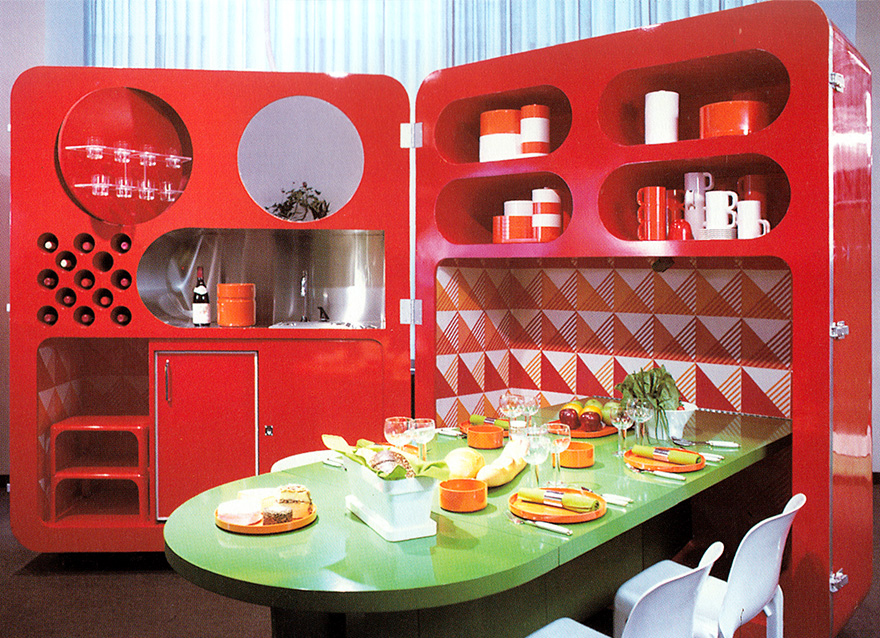 High-Tech really has two meanings, and though both are interrelated, the slight differences are significant to the larger picture. In architecture and design, High-Tech is exemplified by Renzo Piano and Richard Rogers's Pompidou Center and Norman Foster's Nomos desk. It might be said that for both, the structure of the thing is the thing; that is, both make the way that they are built candid and explicit. Piano and Rogers, with the Pompidou, made all the innards (conduits, ballast, girders, etc.) normally concealed in the architecture, the outer. They decorated the building, so to speak, with its own structure—structure becomes style. The same goes for Foster's desk: he made that which supports the desk, almost in its raw form, the look of the desk itself.

In the furniture design and interior design world, however, High-Tech has a bit of a different connotation. Here it can be pinned down to the amazing, matchless tome High-Tech, published in 1978. Within, Buchsbaum and others integrate the use of ready-made industrial materials into the domestic environment. In his various Soho loft commissions, Buchsbaum used factory walkways in lieu of standard hallways, commercial shelving instead of typical cabinetry, repurposed out-of-the-box Bank of England chairs and multitudes of industrial pendant lights—all with Duchampian flourish. 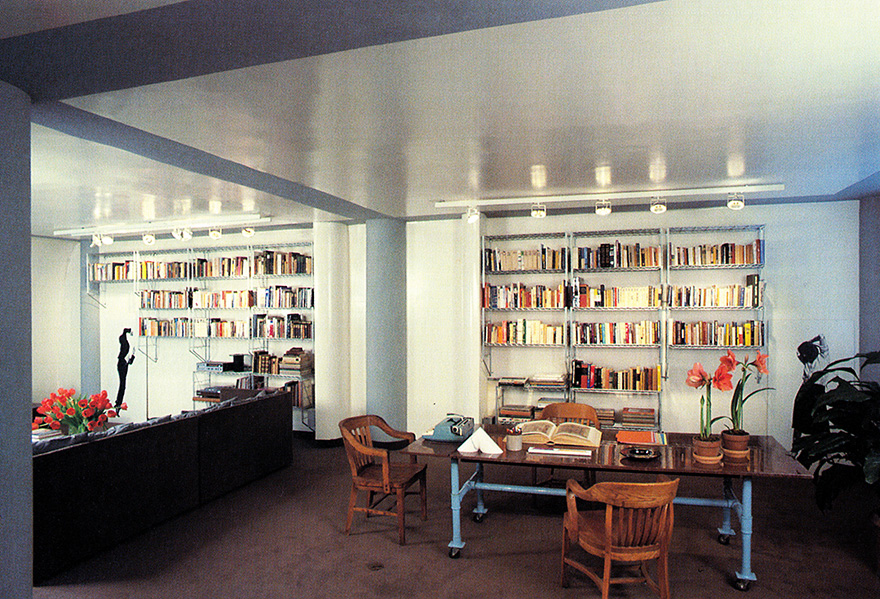 A 1978 Buchsbaum loft interior, with his signature pipe-and-stone desk 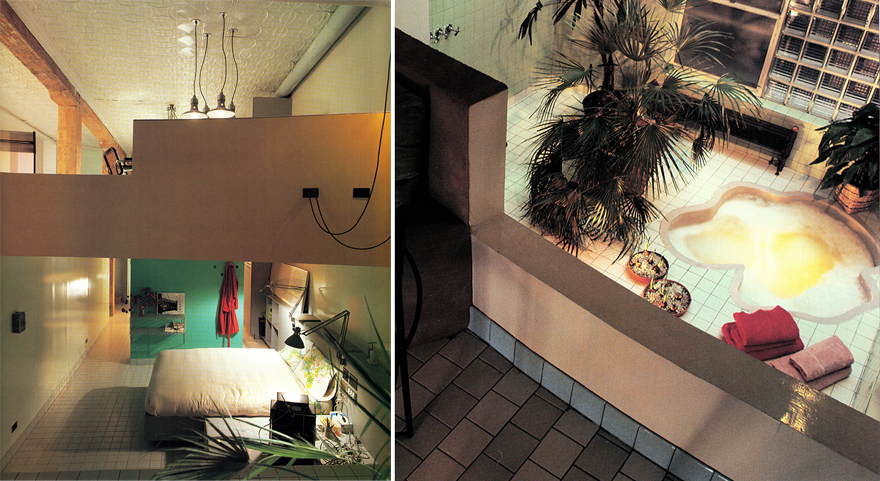 Postmodernism, something we touched upon in an earlier post on Dan Friedman, is design by equalization, brazen combination and relativism. The time of postmodernism's arrival was felt to be almost like a historical logjam in which all details were treated the same and meta-narratives jettisoned—so that neoclassical elements were juxtaposed with fifties futurism; high-end materials (like marble and brass) overlapped with fast-food architectural materials like plastic laminates; surfaces concealing hollow spaces were made to look cartoonishly volumetric; and so on and so on. Obviously the Memphis group is the key arbiter here, and Ettore Sottsass's Carlton bookcase a chief emblem. Buchsbaum at this point in his career was almost a certified master, able to take to the style of story-less cultural chimeras with apparent ease. His interiors and furniture for Anna Wintour and Bette Midler are quite different in effect, but they are both sincere, sensitive and robust affairs—everything a loving twist, including all manner of restraint, style and embellishment. Looking at this stage of his career, Buchsbaum could perhaps be called a romantic postmodernist.

Usually a designer is known for a particular style or era, and when he or she is not, there is an air of opportunism, as if the designer is just reflecting the times and not really contributing. But this is precisely why Buchsbaum is so interesting and complex and, for me, so difficult to flesh out. When I look at the three decades of his work, it is plain that separations of style are formalities of convenience; that each arrival is just a continued dialogue, each singing to each. This is not to say there aren't ruptures or combative factions, but that perhaps the differences are overdone for the sake of filing and cataloguing. Because of the contributions of people like Buchsbaum, it is easier to see that what we perceive as the divide between, say, Corbusian modernism and postmodernist-informed computational design is really a matter of temperaments in context rather than completely ideological. Perhaps invoking Hegel's notion of spirit in time will help to tie this all up more clearly—and I am sure Buchsbaum would have loved this quote:

The bud disappears when the blossom breaks through, and we might say that the former is refuted by the latter; in the same way when the fruit comes, the blossom may be explained to be a false form of the plant's existence, for the fruit appears as its true nature in place of the blossom. The ceaseless activity of their own inherent nature makes these stages moments of an organic unity, where they do not merely contradict one another, but where one is as necessary as the other; and constitutes thereby the life of the whole. (From The Phenomenology of Spirit, 1807) 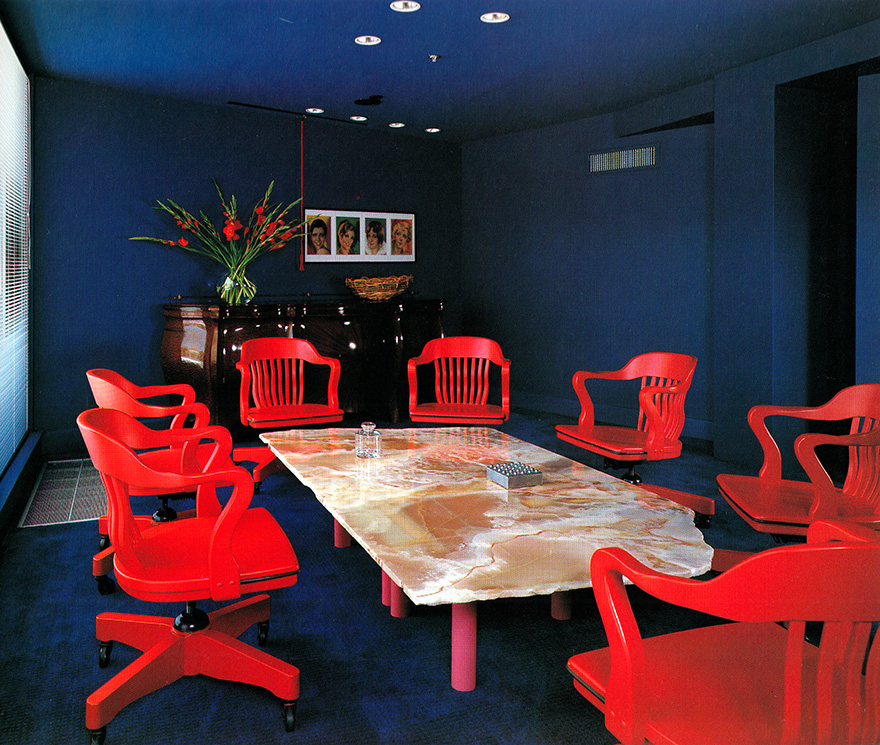 The Gennaro Andreozzi offices (1982), with a custom table and repurposed Bank of England chairs 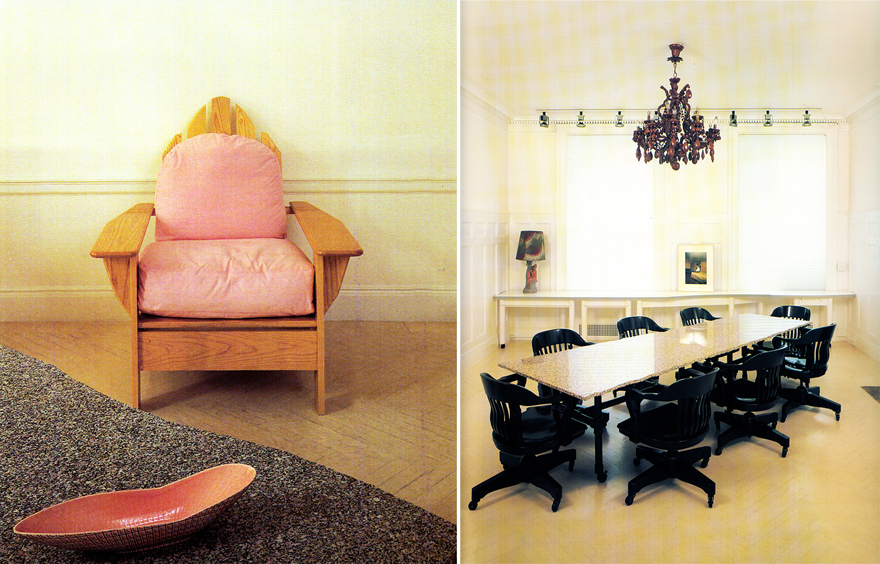 The Balaban Grossman loft (1982), with a repurposed Adirondack Chair (left) and a Buchsbaum pipe-and-steel table surrounded by Bank of England chairs (right) 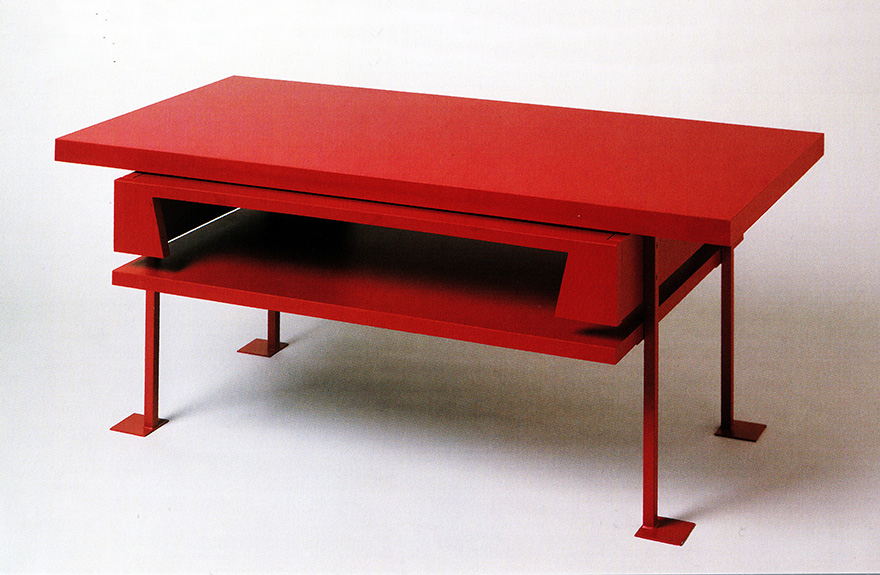 A Buchsbaum coffee table, from 1985 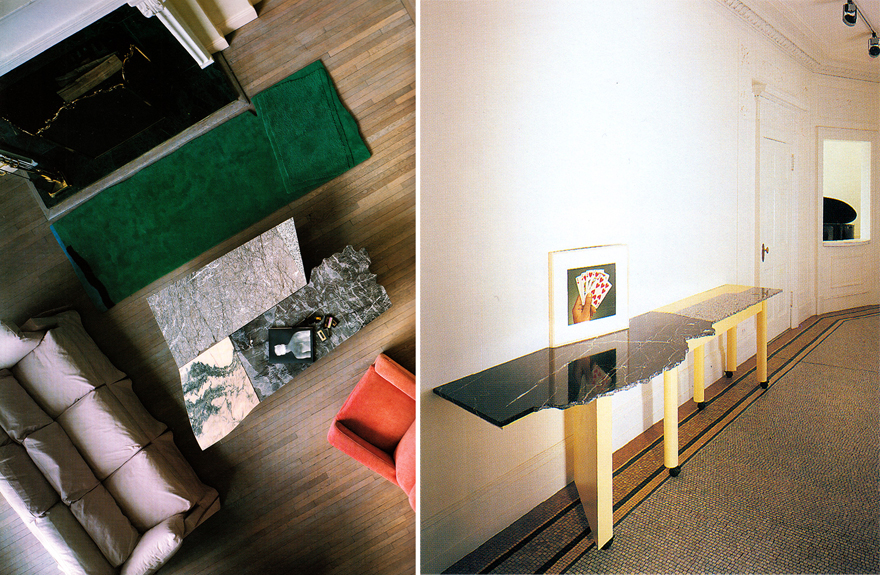 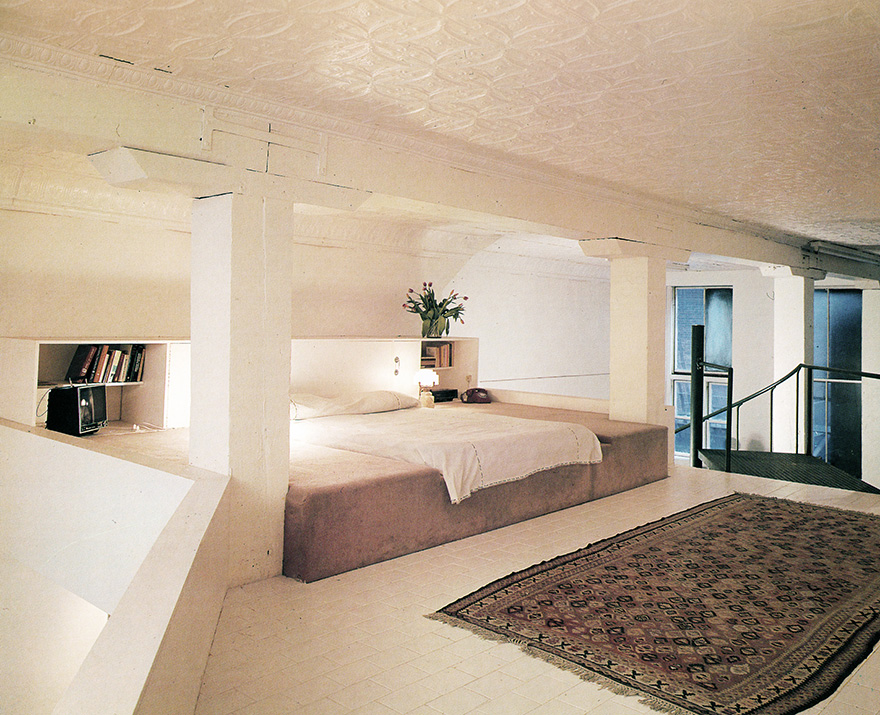 The Rosalind Krauss loft (1976), with a custom platform bed 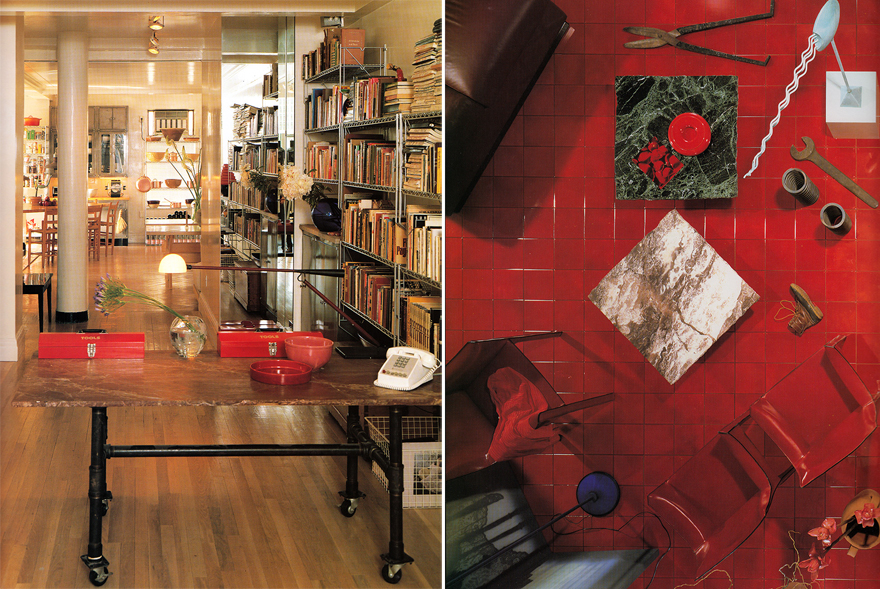 Left: the Gerber Rothberg apartment (1979), with a custom desk. Right: a 1983 installation for New York magazine 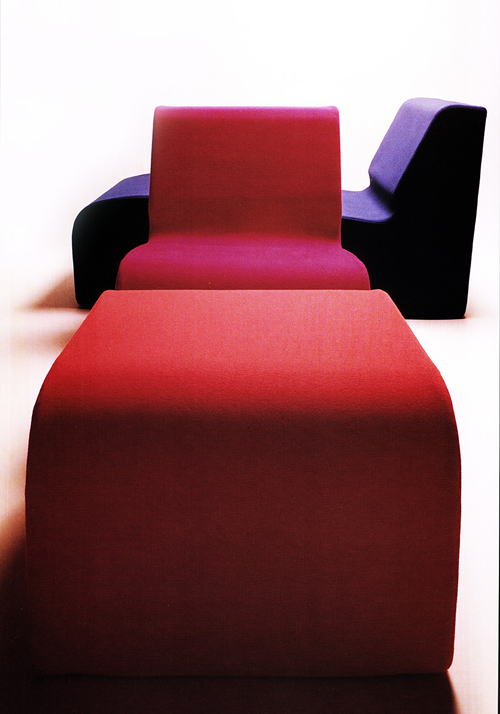