Crossing Over: Side Projects from Six Graphic Design Icons, by John Clifford 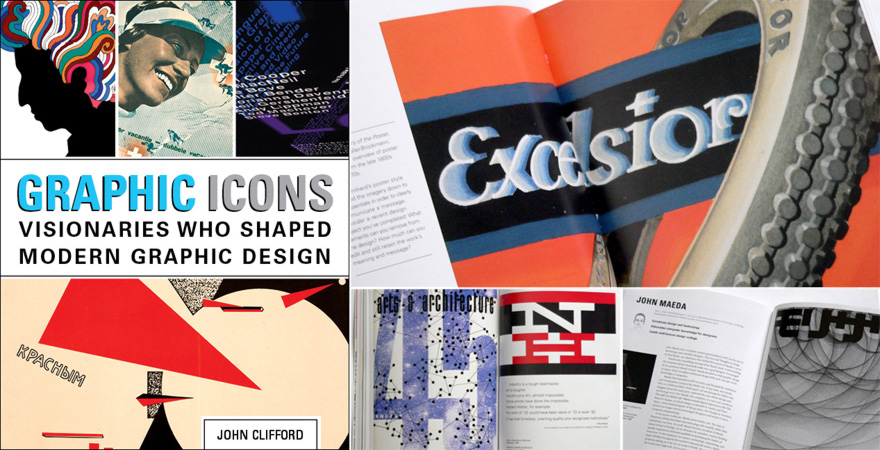 While writing my book Graphic icons: Visionaries Who Shaped Modern Graphic Design, I was impressed by how many of the legendary designers I was profiling pushed themselves and branched out to other disciplines, such as industrial design and architecture. Such explorations can inspire creativity and bring fresh perspectives to each area of practice.

Influenced by the functional Constructivist and De Stijl movements, Sutnar always worked at developing a visual language that communicated directly. Charts, graphs and images simplified information, helping busy people save time. The way, Sutnar steered readers through complex information sounds much like what we now call information design or information architecture, which has been further developed by Edward Tufte and Richard Saul Wurman, as well as by digital and web designers everywhere.

As someone who believed that design should influence every part of daily life, Sutnar designed pretty much everything: furniture, fabrics, glassware and dishes, even toys. His colorful and geometric building block set, "Build the Town," was never actually produced, in spite of Sutnar's efforts to design packaging and promotional materials for it.

Magazines, interiors, book jackets, packaging, fabrics, hotels, mall signage, the opening credits of the cartoon Mr. Magoo—even a helicopter—Alvin Lustig designed all of them. He always felt the title "graphic designer" was too limiting, and it's clear why: He designed everything. And he did it all before dying at the young age of 40.

Lustig started designing interiors while working for Look magazine in the 1940s. Work like this inspired him to design the total package for his clients, from corporate identity to office environments. Though he is best known for his book covers, his experience among many disciplines gave him more freedom and opportunities.

German-born Will Burtin consistently demonstrated that design can deliver important and useful information, and that its beauty lies in clarity and effectiveness. He designed easy-to-understand charts and graphs to present complex data for Fortune magazine, as well as for Scope, the magazine for medical professionals from Upjohn Pharmaceuticals.

During his 30-year relationship with Upjohn, Burtin designed the company's identity, packaging, communication materials, and groundbreaking exhibits. To help people better understand the human cell, he designed a walk-through model, enlarged one million times, with pulsing lights powered by a mile of wiring. Around ten million people saw the exhibit as it traveled the United States. Soon after, he designed an exhibit for the human brain, focusing on the process of thinking.

Studying under painter Giorgio Morandi in Italy transformed Milton Glaser's views on design. He learned to respect the past and to draw inspiration from ideas and movements that actually came before the Bauhaus.

Well-known for his 1966 Dylan poster and the "I Love NY" logo, Glaser is very versatile. He founded New York Magazine with journalist Clay Felker in 1968, art directing it for nine years. It became the blueprint for city magazines all over the country. To make a federal building in Indianapolis more inviting, Glaser designed Color Fuses, a mural wrapping around the building that explores the interaction of light and color. His love of food led to graphic and interior design projects for several restaurants, including Windows on the World at the World Trade Center. He has also designed packaging and store environments for supermarkets, making product information clearer and helping people better navigate through the store. His teaching and writing have contributed greatly to the field. He still works today, and recently revisited the trippy 60s to design posters promoting the TV show Mad Men.

Graphic design isn't all that Michael Vanderbyl does—he also designs furniture, showrooms and products—but it certainly informs everything he does. He proves that if you can design, you can design anything.

Vanderbyl started his design firm in San Francisco in 1973. His early graphic design work combined simple typography with playful postmodern elements like pastel palettes, diagonals, textures, and patterns. Vanderbyl was always intrigued by three-dimensional work (even though he was once told he wasn't smart enough to be an architect). When one of his major clients didn't have the budget to hire an architect, Vanderbyl stepped in to design a product showroom. His graphic-design background led the way, as he looked at the project like a life-size brochure, with an emphasis not on the space, but on the products. Vanderbyl's product-oriented solution stood out, and he gained more work designing showrooms.

As a design student, Paula Scher couldn't get the hang of working with type, of formally positioning words and letters in a layout. Then her teacher, Stanislas Zagorski, suggested that she think of type in a more conceptual way, using it as the main image in her work.

In 1994, Scher, a partner at the influential studio Pentagram, took on a defining project: a new identity for New York City's Public Theater: a big, bold typographic language that was loud and urban and distinctive. Scher's street posters for the show Bring in Da Noise, Bring in Da Funk pushed this in-your-face style even further, with brash type that actually looked noisy. For her, the best way to grow as a designer is to take on projects for which she's not qualified. After making a big splash with the Public, she was approached to design architectural signage for other performance venues. She had no experience in that field, but the work forced her to think in new ways; her fresh approach resulted in innovative and successful signage for projects such as Symphony Space, Jazz at Lincoln Center, and the New Jersey Performing Arts Center.

Crossing Over: Side Projects from Six Graphic Design Icons, by John Clifford