Drones Are SO Over: Meet MIT's Creepy Autonomous Robot Fish

New technology usually makes waves when it's flashy, but this project from MIT Distributed Robotics Laboratory takes place ominously under the waves. Its upshot is an independently operating fish that swims realistically and reacts with self-protective behaviors, dubbed the Autonomous Soft Robot Fish, which is a terrible acronym and awesome idea. Soft robots are robots whose bodies are powered by pressure within "flexible channels," rather than a rigid structure. They're also often literally softer, made of materials less damaging to spongy-bodied humans. What this all means is that the fish's silicone body is flexed and powered by pressurizing internal chambers, in this case long channels cut down each side of the tail. As they put it, "carbon dioxide released from a canister in the fish's abdomen causes the channel to inflate, bending the tail in the opposite direction."

More than just a buoyant decoy, it swims elegantly and can perform 20 or 30 "escape maneuvers," where it can display up to 100 degrees of slick escapism. So with its boneless continuously moving body, this fish is able to respond agilely to threat and hightail it in a wide variety of directions. Less attack drone, more responsive reconnaissance robot. Having proved its maneuverability, a new version will pump water instead, and be able to operate for up to half an hour. 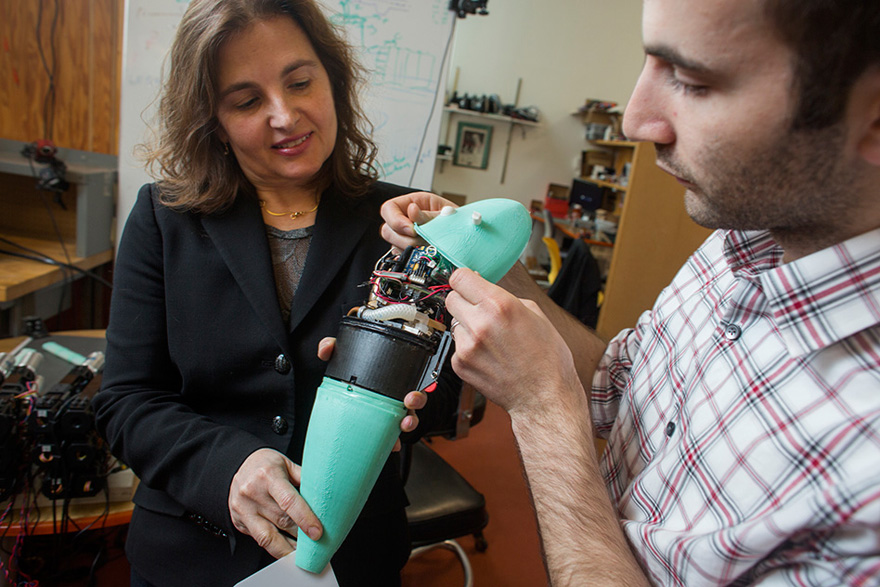 This slippery fish uses biomimetic features to great success. Like most non-robotic fish, the majority of its mobility takes place in the back half of the body, while the rigid head houses the delicates needed for computing, pumping and powering itself (à la brain, organs, etc.). For traditional jointed robots, collisions may impair strength and function, but the fish's gyrating silicone body can take simple a impact without fear of damage and even gain speed from it. Soft robots—aquatic and otherwise—are considered very promising, due to their ability to overcome numerous physical and programming limitations.

The researchers suppose this type of design can be used for tracking the behavior of schools of fish. I think they'd be better off monitoring our Cold War enemies' underwater bunkers.

Drones Are SO Over: Meet MIT's Creepy Autonomous Robot Fish