Designing an Umbrella Stand: Not as Easy as It Sounds 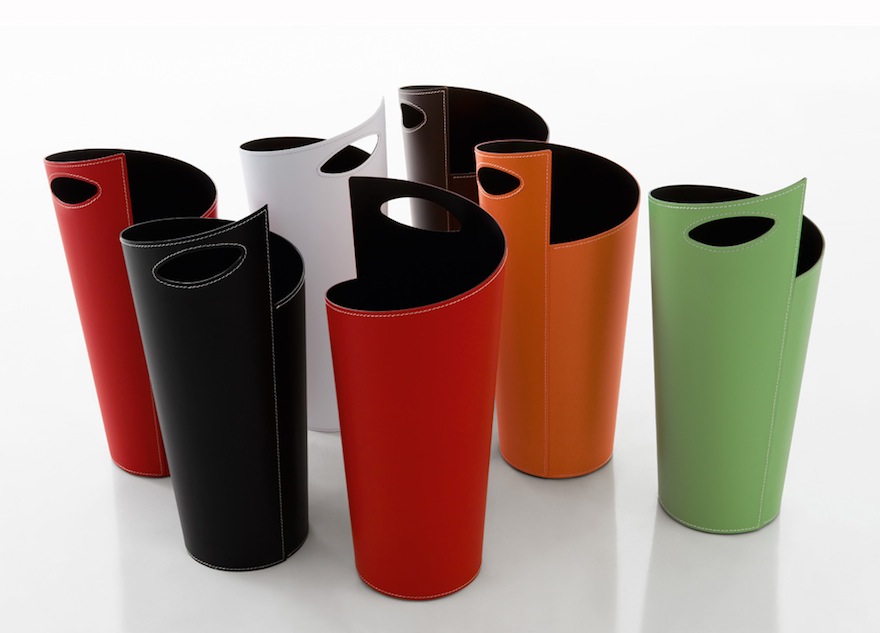 Umbrella stands find a place in homes, offices, and retail establishments. They seem like such a straightforward item, but actually a number of design decisions come into play.

For example, let's look at the Ombo umbrella stand from Com.p.ar, designed by Alberto Arter and Fabrizio Citton. It's made from black lacquered steel, covered with regenerated leather—so it should wear well, but it's definitely an inside-only item. And while it's a beautiful design, it won't work for people who use compact collapsible umbrellas rather than traditional full-sized ones. 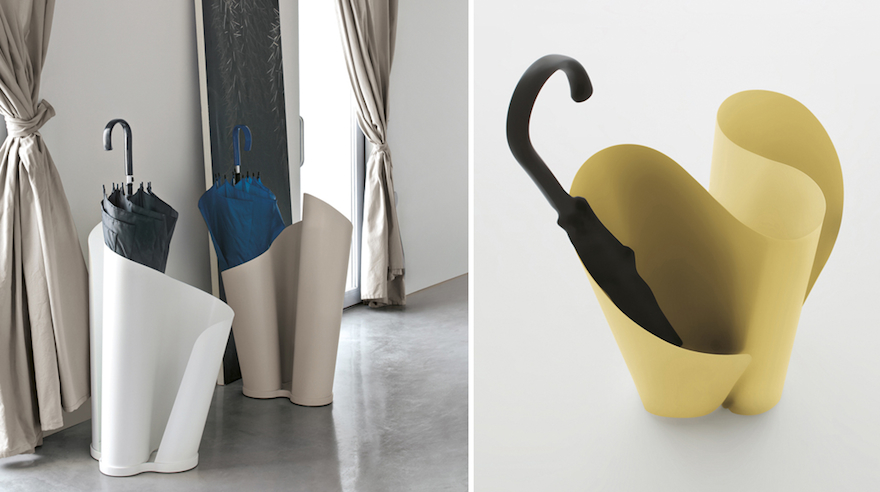 Compare that to the gorgeously curvy Narcisco umbrella stand from Tonin Casa, designed by Davide Bozzini. It's made of powder-coated steel, and comes with a number of cautions [PDF]: don't expose it to sunlight, don't expose it to the elements if it's kept outside, and watch out for "dangerous objects" which could cause scratching—not the umbrella stand for household with small children. This one is also intended for traditional umbrellas only. 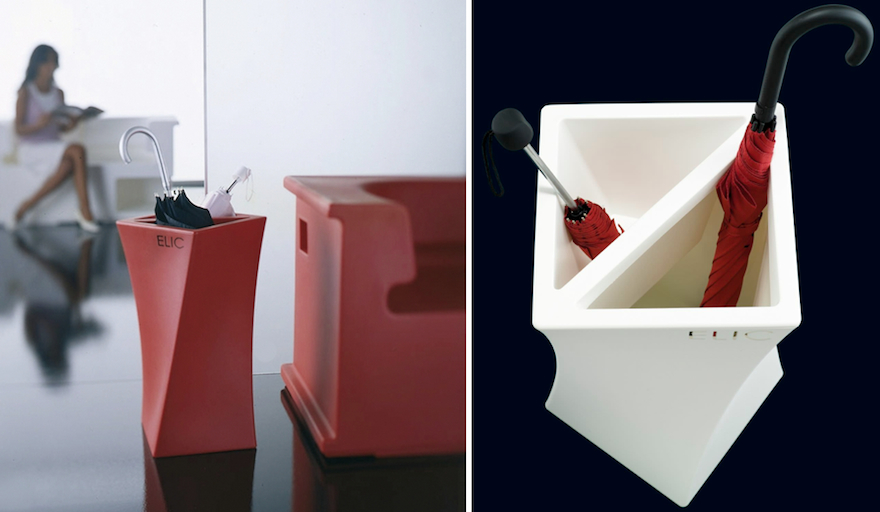 The Elic umbrella stand from Area Declic, designed by Antonio Lanzillo and Carlo Martinengo, is made from polyethylene produced by rotational molding. This is a super-practical design for end-users who aren't opposed to plastics. It's UV resistant, and OK for outdoor use. (But at only 8.8 pounds, and with a relatively high center of gravity, I wouldn't leave it outside in high winds—although, polyethylene being shatter-proof, at least it wouldn't break if it did fall over.) It has two spaces, one for short umbrellas and one for tall ones; if the end-user doesn't have short umbrellas, the short compartment could certainly be used to stash something else. 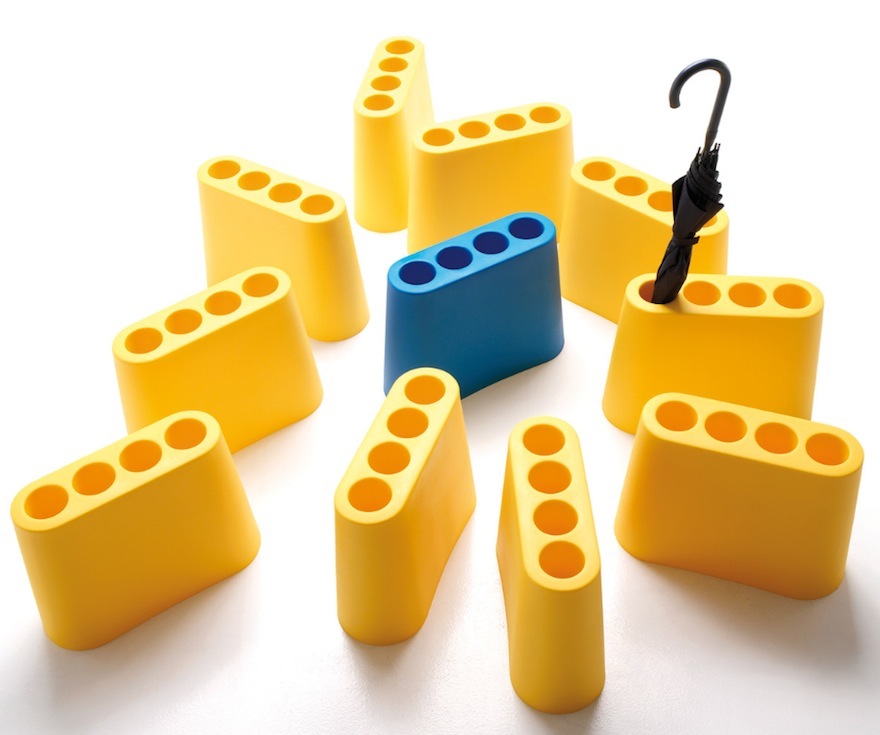 The Aki umbrella stand from B-Line, designed by Rodolfo Bonetto, is another one made from rotomolded polyethylene. It can be used indoors or out; as B-Line says, "It has no problem with water." Since it's only seven pounds, it's another one I wouldn't leave out in high winds—something we get a lot of in my part of the world. 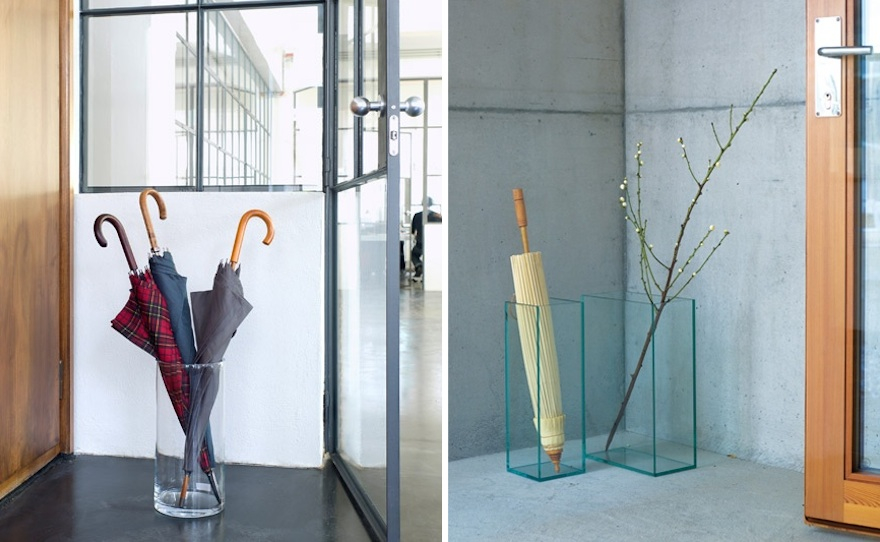 The glass umbrella stands from Sch&oumlnbuch are stunning, but how in the world would you keep them clean? 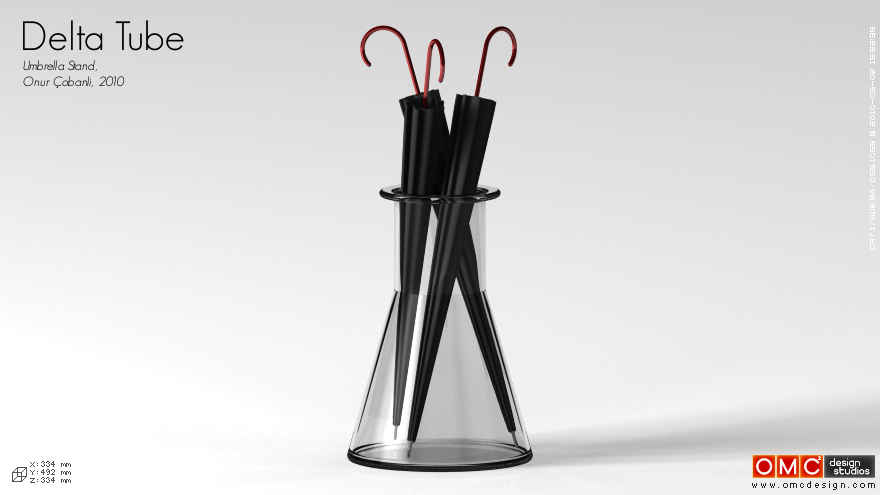 The Delta Tube Umbrella Stand, designed by Onur Müstak Çobanli of OMC Design Studios, could be made from either plastics or glass. While the transparent look is lovely, it would get a lot less lovely after some use, and it would be another hard-to-keep-clean item. 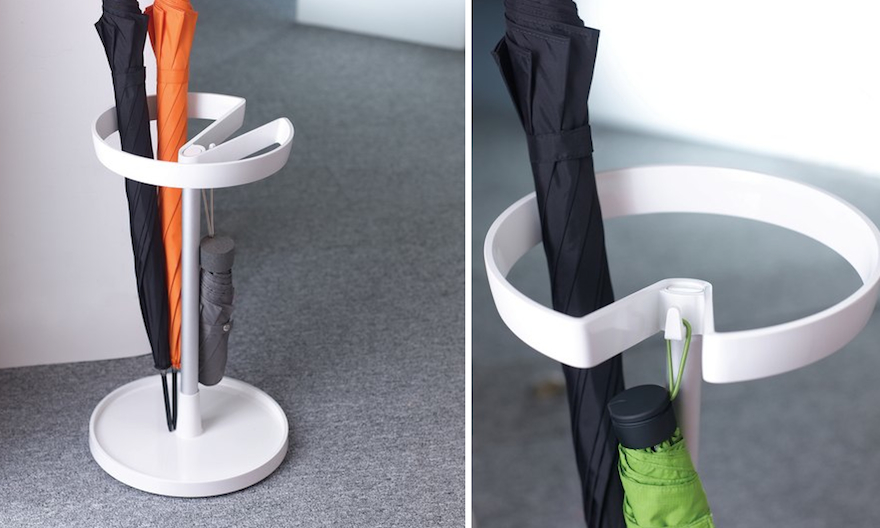 Cleaning is much less of an issue when the umbrella stand isn't a fully enclosed space—but then drip-catch solutions become a concern. (And is it easy to remove any accumulated water from the base of the stands, so they don't get yucky?) Here's the Hover umbrella stand from Studio Domo, designed by Speziell (Sybille Fleckenstein, Jens Pohlmann and Thilo Schwer). You can't see it, but there's a rubber mat, designed to control drips, integrated into the base. The little rim around the base helps control drips, too. And there's that little hook to hold the small telescoping umbrellas. 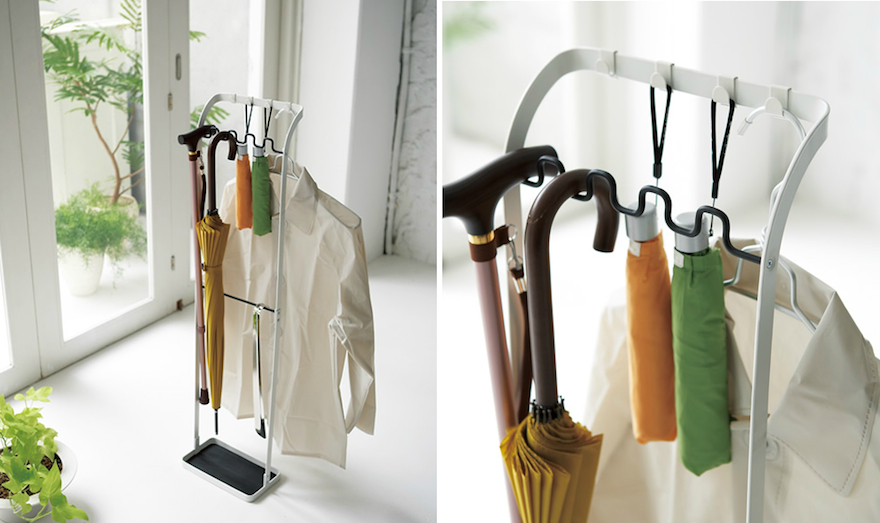 Yamazaki also uses a tray with a rim in its Hanging umbrella stand Tower. The tray has a synthetic rubber mat.

The Platea umbrella stand from Mobles 114, designed by company founders JM Massana and JM Tremoleda, is made from chromed steel. The drip pan is painted aluminum, and the company says it can be easily emptied (although the end-user's dog might drink up that dirty water first). This one accommodates different sizes by having a lower rung for support; it might not work for the shortest of umbrellas, though—ones without an extended handle. 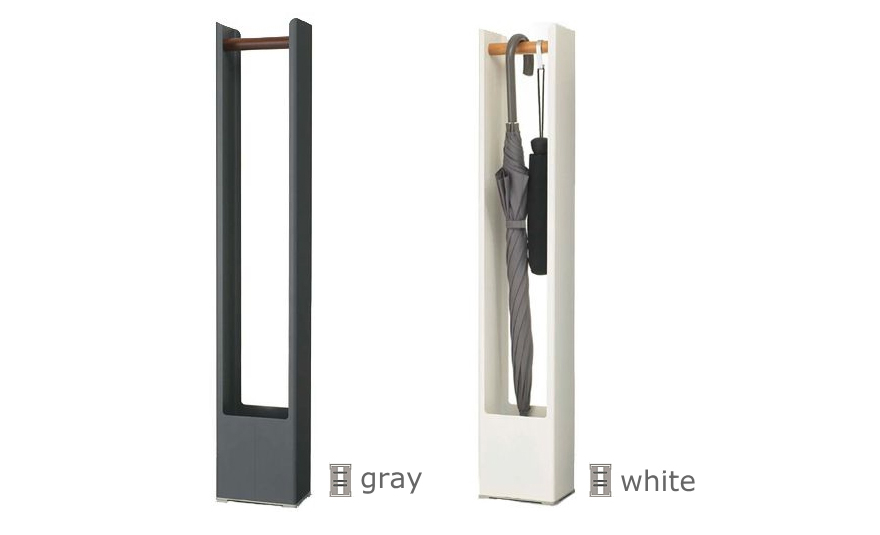 Tidy—the Teramoto Industrial Design Yard—brings us the Tetto-tall, designed by H.Miura with h-concept. The bottom tray can be removed to dispose of any collected water. This one can be used inside or outside, and accommodates shorter umbrellas with a hook that attaches to the bar. The company does warn you to put this product against a wall, or in a corner, for stability purposes. Those of us in earthquake territory might want to bolt it to the wall, once we're sure exactly where we want it. 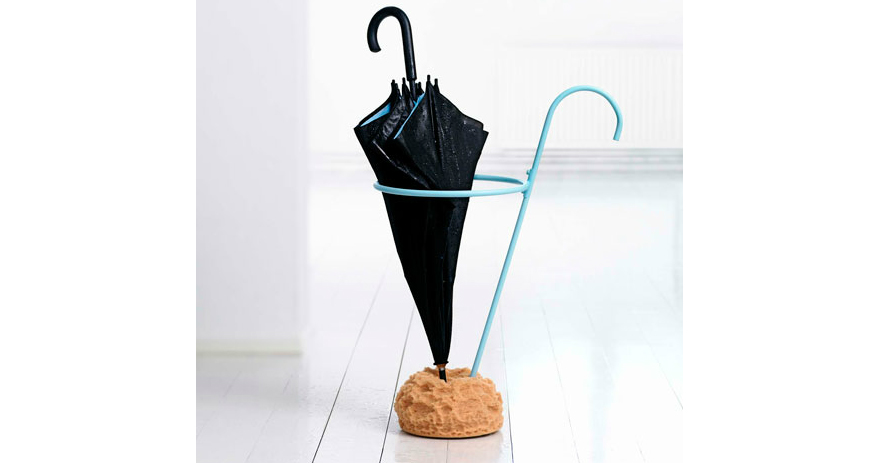 But not all open umbrella racks use the tray approach; this umbrella rack designed by Eva Schildt uses a synthetic sponge. The stand itself is lacquered steel.

And then some umbrella racks dispense with trying to collect any drips. Taichi Yonehara, the designer of this umbrella rack from the Japan Modern Collection, decided not to use one for reasons that are a bit hard to understand, given the English translation from Japanese, but seem to involve sanitation concerns. This kind of umbrella rack would need to be used outdoors, or in a room where floors are expected to get wet. But it does do a nice job of handling various sizes of umbrellas. 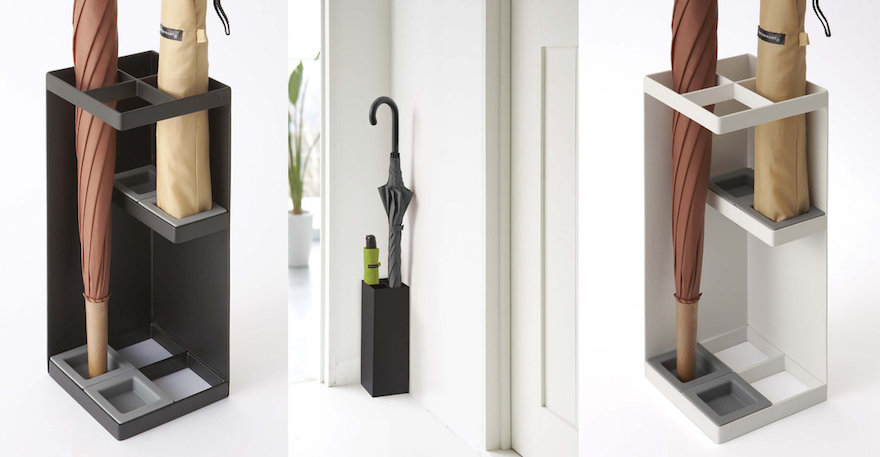 This steel umbrella stand from Yamazaki is interesting because while the design seems well thought out, accommodating both short and tall umbrellas, a number of reviewers say it's too small; it doesn't fit their umbrellas. It's a good reminder to consider the range of umbrellas the end-user might have—everything from a tiny travel umbrella to a large golf umbrella. If the stand is only designed to handle some of these, that should be made very clear to potential end-users. 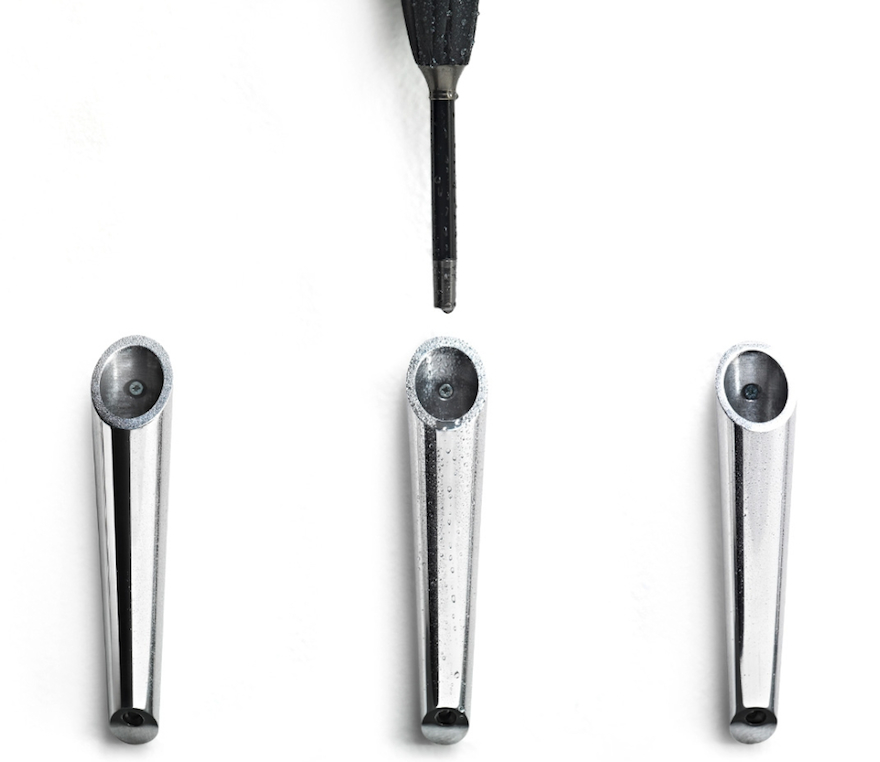 Carlo Contin designed these aluminum wall-mounted umbrella stands called Piove. Each one has a small hole at the bottom for water to drain out. While they are intended to be used inside and out, there will be drip-related issues for any indoor use. Also, since these sit very close to the wall, I'd be a bit concerned about the walls getting wet, too.

Of course, there are additional considerations for umbrella stands designed for commercial use; they probably need to accommodate more umbrellas than stands used at home, as well as a wide range of sizes and styles. Here's one interesting fixture that Tony Kadysewski wrote about on his Fixtures Close Up blog that meets those needs quite well. It readily holds a lot of short umbrellas with no handles; larger umbrellas fit in the interior section and hook over the top rail. Kadysewski says it would even accommodate a golf umbrella.

Designing an Umbrella Stand: Not as Easy as It Sounds