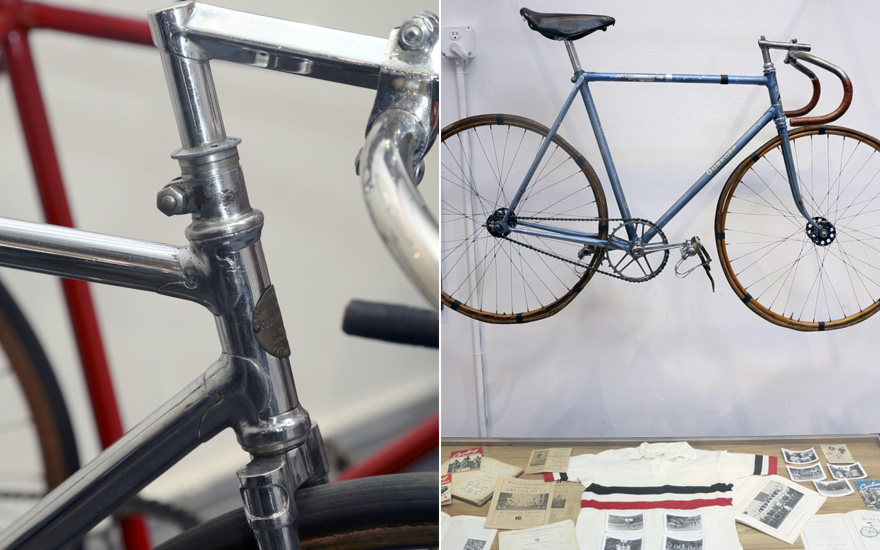 On the occasion of the Red Hook Criterium this weekend, the Rapha Cycle Club here in Lower Manhattan is pleased to present Gangs of New York, an exhibition of exquisitely preserved vintage bicycles from the collection of Edward Albert. If Jamie Swan is a "Keeper of the Flame," so too is Albert a dedicated chronicler/collector amongst the current generation of cycling enthusiasts in the Tri-state Area.

What do these bicycles, mostly from the interwar period, have to do with an unsanctioned nighttime race in a Brooklyn shipping terminal? As Albert notes in this brief history of his personal story and the bicycles currently on view at the Cycle Club, all bicycles in New York were fixed-gears until the middle of the last century, when derailleurs finally caught on in the States. So while we look forward to footage of this year's race—Red Bull will be capturing it this year—we are very pleased to have a folk historian share a bit of context for NYC cycling culture.

Albert will be present at the opening reception of Gangs of New York, tomorrow afternoon from 2–4pm at the Rapha Cycle Club at 64 Gansevoort Street, New York, NY 10014 (the Red Hook Criterium will take place later that evening).

As a Ph.D. in Sociology, I taught for 25 years at Hofstra university and retired in 2005 as an Emeritus Professor of Sociology. Many of those years were spent studying the sport of bicycle racing, about which I have published quite a bit in professional journals and edited collections.

I have always been interested in bikes—like most people, I've been riding since I was a kid. But the 60s being what they were, even though I wanted to race, smoking etc. got in the way. In 1974, I was in Toronto working on my doctorate and got involved with a local bike store and club. By the following year, at the age of 26, I was all in. Bike racing became the most important thing in my life. I quit smoking and started racing seriously as I worked on my dissertation. I moved up relatively quickly (to Cat. 2) and continued to race until around 2000. Sometimes I think I stayed in academia because it allowed me the time to train and race—I became a cyclist and continue to define myself as such.1

I started collecting when I stopped racing. Before I stopped, all I wanted was a bike that would help me do well in races. After collecting for a bit, I got talked into bringing two bikes to the Cirque du Ciclisme vintage bike show in Greensboro, NC. They were a restored pair of Dick Power bikes I had gotten from a guy who knew him, whom I had met while out training. The bikes—one track and one road—won Best in Show. I was hooked. That also started me on the path of not only looking at the bikes but (as a sociologist and social historian) looking at the stories behind them. That ended up with me interviewing countless riders from the day and my as-yet-unpublished book A Dark Day in Sunnyside about the builder and coach Dick Power. 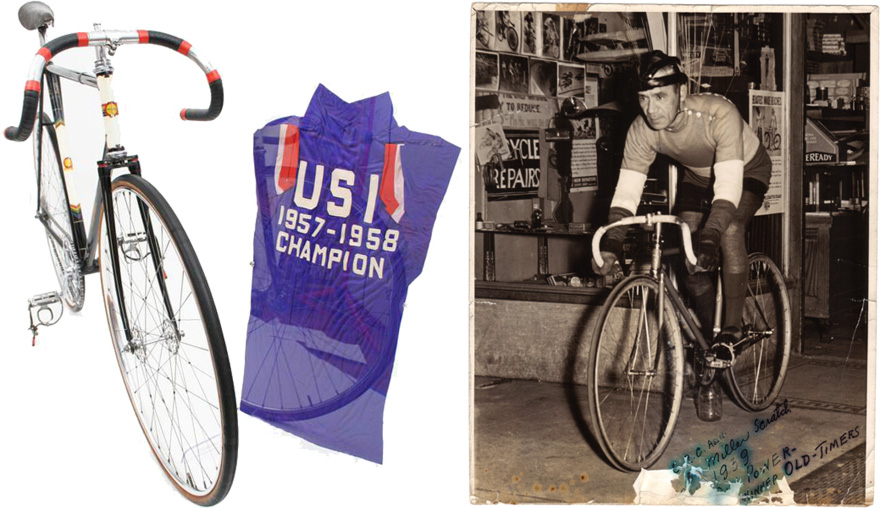 I have about 38 bikes, give or take a few, at the moment. Many of the New York track bikes and memorabilia came from the people I interviewed. After interviewing a good ex-rider and member of the German Club, Eddie Troll, I asked if he had any stuff left he would be willing to sell. He took me into the garage and showed me his bike, lots of parts, etc. He said sure, my kids are just going to throw this stuff in the dumpster. This was not an uncommon theme—I got the Drysdale that is in the show (more on that below) from a nonagenarian who had retired to Las Vegas. Same sentiment.As for grail bikes... as odd as it may sound, my favorite is my Cinelli Laser. I think it the height of design in bicycles. Not too functional, but the form, oh the form. Others include bikes I have by Dick Power and Appelhans; I am a big Masi fan and have a first year Italian Masi Gran Criterium.

Aside from a Laser that I just acquired from the estate of a friend who recently passed away, I think my prized possession would be my two Mario Confentes, one track, one road. The road bike I got as the result of a tip from another Confente fan. He said there was this guy in NYC who was into Confentes and had one he wanted to sell. I called him and arranged to meet him at a shop in upper Manhattan (Conrad's); I showed up and saw that the frame was being prepped for shipment to be refinished by Cycleart. I immediately told them to stop—I looked at the bike and said this bike does not need to be refinished, just touched up a bit (I am a stickler for originality and hate having to repaint). We closed the deal on the spot. I bought the bike and the parts, which were still in the back of the store, including Campy titanium SR pedals and a bottom bracket, as well as a stem engraved by Confente with the original owner's name, and other Confente-engraved parts.2 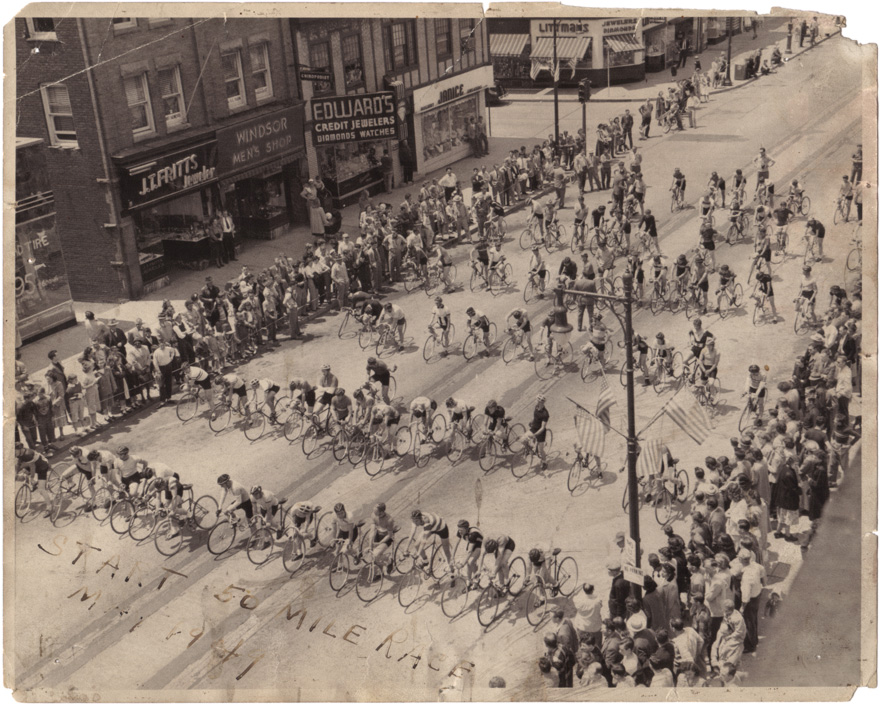 On the whole, I am overjoyed by the recent resurgence of cycling... which is a bit ironic, because when I got into cycling, it was still a countercultural sport. We were making a statement by doing it. Now that it is becoming mainstream and "trendy," that countercultural element is being lost. Same with the messengers—when they started using bikes as messengers in the late 70s / early 80s, those guys were also countercultural. Now everyone and their aunt rides a "fixie."

Citibike, on the other hand, is wonderful. It is about time that New York catches up with Europe in how to manage travel in congested cities.

On the bicycles in Gangs of New York

Four of the bikes—Dürkopp model Killian/Vopel, Drysdale Special, Appelhans, Dick Power Special—are track bikes, built between the late 1920s and the late 1950s. They were designed to be used for racing in various venues: velodromes, of which there were several in NY and NJ; flat tracks like the one that was the center of racing in NYC in the 50s, Flushing Meadows (Shea Stadium was eventually built on top of the track, which was essentially a parking lot with lines); and for road racing and training. Until some time in the 50s, all racing in New York was done on fixed-gears—everyone even trained on their fixed-gear bike, sometimes drilling a hole for a brake, sometimes just using their palm to stop.3 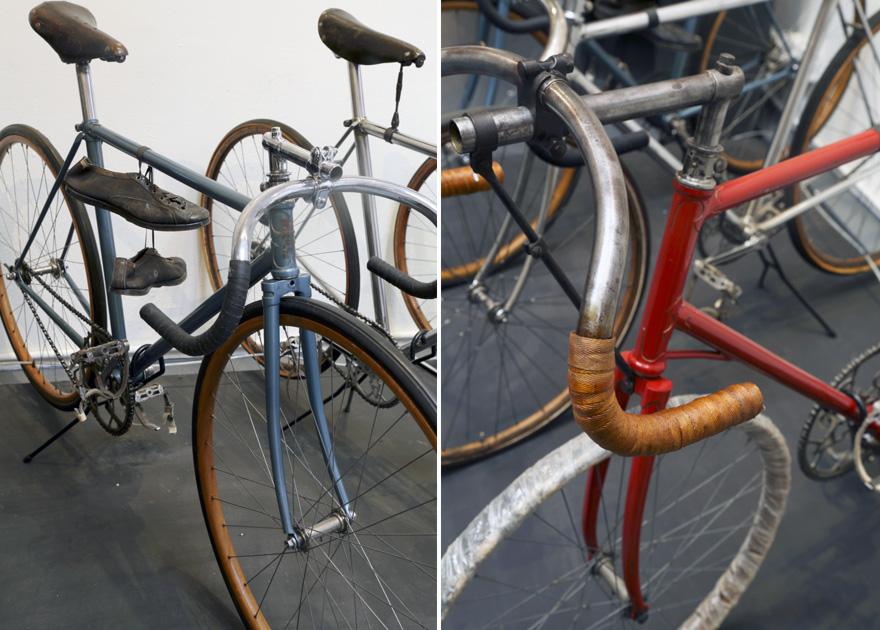 The red bike with the small front wheel is much more specialized—it is what is called a "Stayer" bike, meant only for racing on the track. Up to five racers—all on bicycles like this—would each ride behind a large motorcycle (pacer). The small wheel with the turned fork allowed the rider to get as close to the motor-pacer as possible (drafting has been a strategy since before aerodynamics became a science). The motor-pacer had a so-called "Bump Bar" behind its rear wheel, designed to spin around in case the rider accidentally overtook the motor-pacer, so he wouldn't wreck at speeds of up to 50mph.4 Stayer races were dangerous and fast... and, as you might expect, they would be the highlight of a velodrome's racing program.

Contemporary cycling fans may notice that the older bikes have slacker angles—as time went on, the geometry became steeper and steeper. The chains are "block chains," in which each link has a solid section in the middle, not "roller chains." This type of chain is more expensive but stiffer and stronger, supposedly delivering more power to the wheels.

The bikes are examples of the importance of function over form; they are simple, more like tools than aesthetic objects. The lugs are not ornately detailed, if at all. Racers were mostly working people who could only afford one bike, and they used it for racing and training. These bikes were meant to be raced, not admired.

Stayer - We do not know who manufactured this example of a stayer bike—all we know is that it was probably built in the New York area. It was owned by Lou Maltese and raced in the very early 1930s at several New York and New Jersey Velodromes including the one at Coney Island. Maltese was a long-time member of the Century Road Club Association and went on to run the club until his death in 1990.

Drysdale Special - This Drysdale was owned by a founding member of the German Bicycle Sports Club, Eric Weingartner. His name appears in the club's founding documents from 1927. According to Weingartner, who I interviewed around 2006 when he was already 90 years old, the bike was custom made for him in 1934. (Although I cannot be sure, I think the bike probably was repainted by Drysdale after WWII; Weingartner does not remember this but I believe it to be the case.)

Dick Power Special - This bike is one of a pair of matching Specials made for Robert Frey who rode for the Unione Sportiva Italiana. It was made in 1957 and ridden by Frey to five consecutive USI club championships (1957–1961). The story of how I bought them from Frey is a good one: He had three interested buyers and asked each to make an offer. One was considerably higher than mine but he took my offer because he said he trusted me to be a good caretaker of his stuff. I have tried to live up to that—this bike is totally original, down to the tires. The only thing replaced was the red tape on the bars; the black tape is original. Frey is alive and well and living outside of Atlanta.

Willy Appelhans - The Appelhans was bought by me several years ago at the one of the annual Copake New York bicycle auctions. It retained its distinctive Appelhans head badge but not much else. Most of the parts, including the front fork, had been swapped for cheap modern ones made by Schwinn and unknown Japanese manufacturers. But the bike retained its key feature, the beautiful thinned out lugs that were an Appelhans trademark. I replaced all the "wrong" parts with those that were period-correct for a late 1920s Appelhans.

Dürkopp model Killian-Vopel - I was contacted about this bike by a fellow in Cleveland who had just moved into a new house and found it in the garage. It is original down to the tires—the only thing replaced was the handlebar tape, and the leather on the saddle, which had become just powder. It is a model named after the two best six-day riders of the 1930s, the German riders Gustav Killian and Heinz Vopel. Vopel died on the Eastern front during WWII and Killian went on to coach the West German National track team for a number of years.

This Wilier is also on view; you'll have to ask Albert himself about how the early rear derailleur works... (Image courtesy of Edward Albert)

For more on Albert's collection and the history of bicycle racing in New York City, check out his site, TheVintageBikeLife.com.