In the Details: Building a 3D Sketchpad That Lets You Draw Objects in Midair 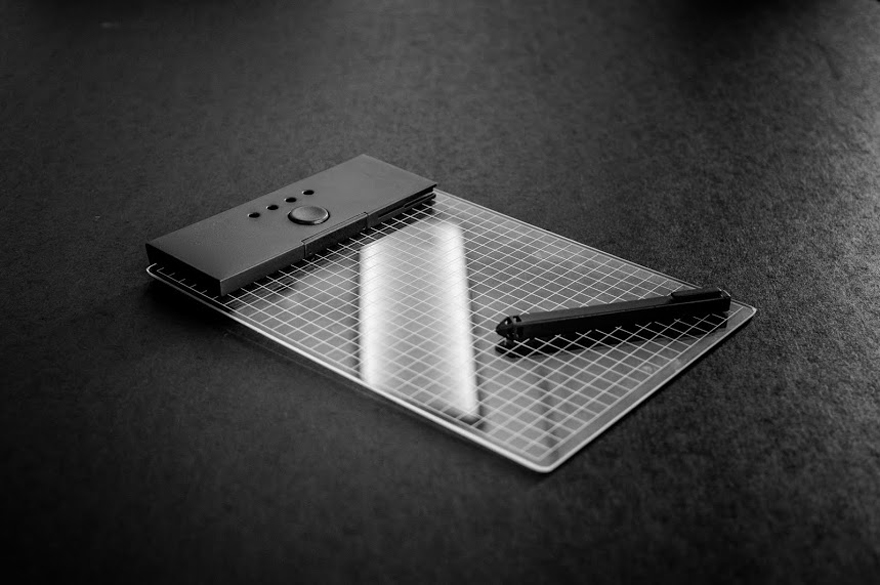 With the rise of augmented reality (AR) technology, virtual reality headsets like the much buzzed-about Oculus Rift aren't just for playing games in a simulated universe—they can actually help industrial designers do their jobs, too. Four students at the Royal College of Art recently suggested how with Gravity, a 3D sketchpad that they debuted at an RCA exhibition last February.

Right now Gravity exists as a functioning prototype—and it works pretty much exactly how you would imagine. Users don virtual reality glasses and then draw objects in space above the Landing Pad, a handheld glass platform. This space above the Landing Pad is called "GSpace," and it can be comprised of a single drawing or multiple ones. By rotating or tilting the Landing Pad, the user can control the plane the drawing exists on and build out the drawing, much like adding details to a real object in space.

Gravity works by integrating several tracking technologies to be able to pair and synchronize all of the different elements of the system together with the AR glasses, so that the 3D-generated content is overlaid on top of the user's vision in real time. The team has a patent pending on its innovation.

The Gravity team—Guillaume Couche, Daniela Paredes Fuentes, Pierre Paslier and Oluwaseyi Sosanya—is currently finishing the beta software and looking for manufacturers for the Landing Pad and the pen. Users will have to provide their own virtual-reality headsets; the developers have been working with AR glasses by the French company Laster, but they're aiming for universal compatibility. "We have recently made our software compatible with Oculus Rift and we are looking into making it work with all the leading-edge AR glasses on the market (that is, with on-board camera and LARGE field of view for immersive AR)," the Gravity team writes in an e-mail. "Gravity is a tool where augmented and virtual realities can be exploded as creation tools. This is why we are trying to make it available for as many platforms as possible. Our idea is to become the universal platform for 3D sketching in AR."The idea for Gravity was born during a group project as part of RCA's Innovation Design Engineering program. The students were exploring the abilities and limitations of creative people when it comes to quickly materializing an idea. Pen and paper work well for creating two-dimensional interpretations of three-dimensional ideas—but perspective-drawing skills are required. Likewise, the RCA students felt that CAD tools fall flat depending on the user's skill level. With the rise of the maker movement, the team wanted to create an accessible tool with a low entry point, so that even the least CAD-savvy could draw and model objects in real time. "Gravity started with a strong belief: the mediums that are commonly used for drawing, designing and making things in 3D limit people's ability to bring their ideas to reality in a fast and intuitive way," the team writes. "Gravity was meant to be simple and engaging tool that would shape a new wave of creation." 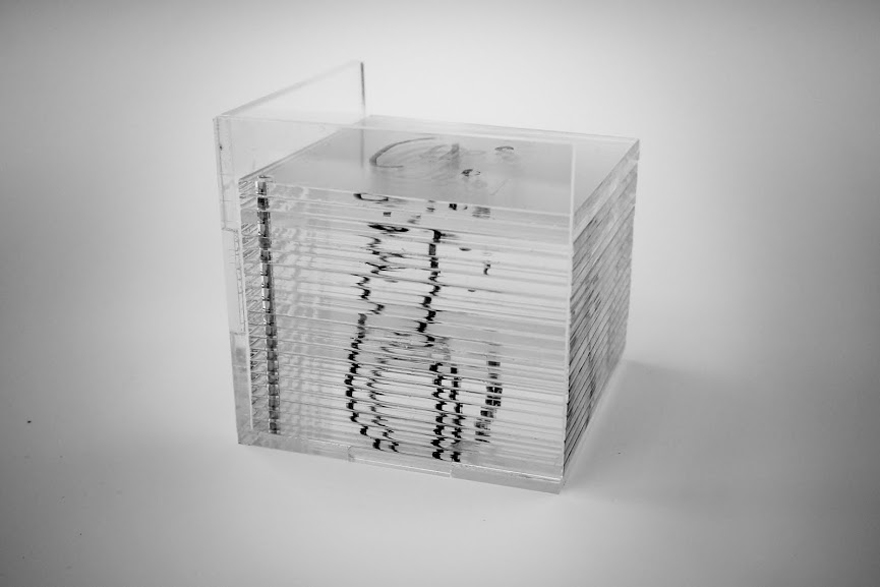 In the early stages of the project, the Gravity team asked people to draw on acrylic squares to build up forms in three dimensions. 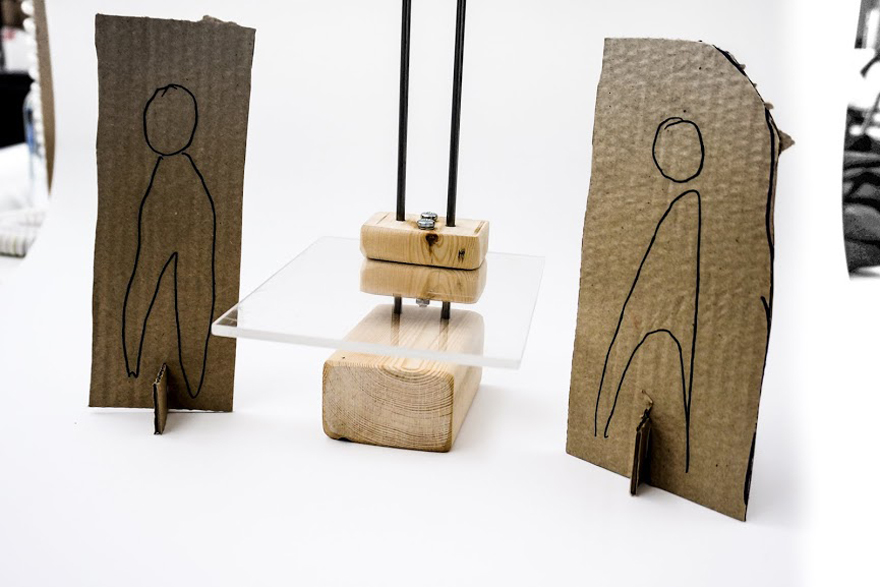 A rudimentary model of how sketching in layers could lead to a 3D form.

In the early development stages, the students used simple tests to help people quickly materialize three-dimensional shapes. Of their tests, two stood out as showing the most interesting results and best user experience. Using a pile of small acrylic squares, the students had users draw in layers to build out forms they were imagining. By visualizing a shape and then tackling it in layers, people were able to quickly and intuitively express their concepts. In another test, the students gave users a larger cube to allow them draw on a bigger scale and, hopefully, add more details. The latter, however, produced worse results due to the many layers needed to complete the shape, creating clunky and cumbersome unfinished forms.

"Throughout the whole process, we were focusing on a very important insight that we found in our research and initial explorations," the Gravity team writes. "By providing a simple set of rules, people quickly learn the limitations of the tool and work their way around them." Through these experiments, the Gravity team found that people could build their ideas out in a three-dimensional space while playing to their natural instincts and the ease of drawing in two dimensions. The cube experiment proved to be very effective for immediately visualizing and sharing ideas—and the Gravity team was surprised by how few roughly-sketched lines were required to convey an idea. Knowing that such a low resolution could be effective, they applied the same concept of rough sketching in layers to be used with AR technology. 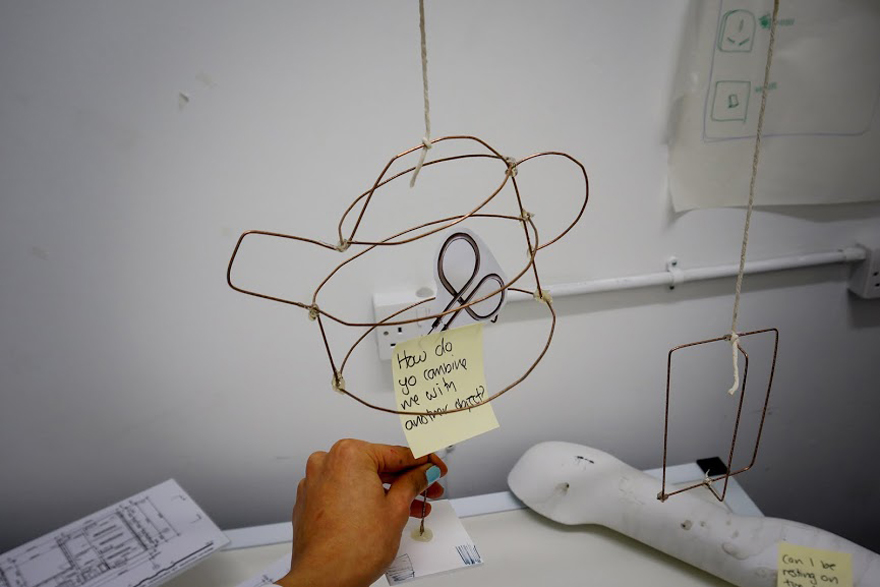 It was only after these analog experiments that the Gravity team moved to take advantage of new technologies. "We wanted to keep the drawing-by-layers experience. However, the acrylic layers had to disappear. With the use of augmented reality, we were able to use only one drawing surface and move it up and down to continue drawing the other layers. The sketched lines would then stay flying in midair," the students write. "With the development of the software and the augmented reality possibilities, it quickly became a tool to freely draw in midair. This addressed another key element that we considered in the initial stages of our project. We wanted to create a tool that would also help and enhance creative collaboration."