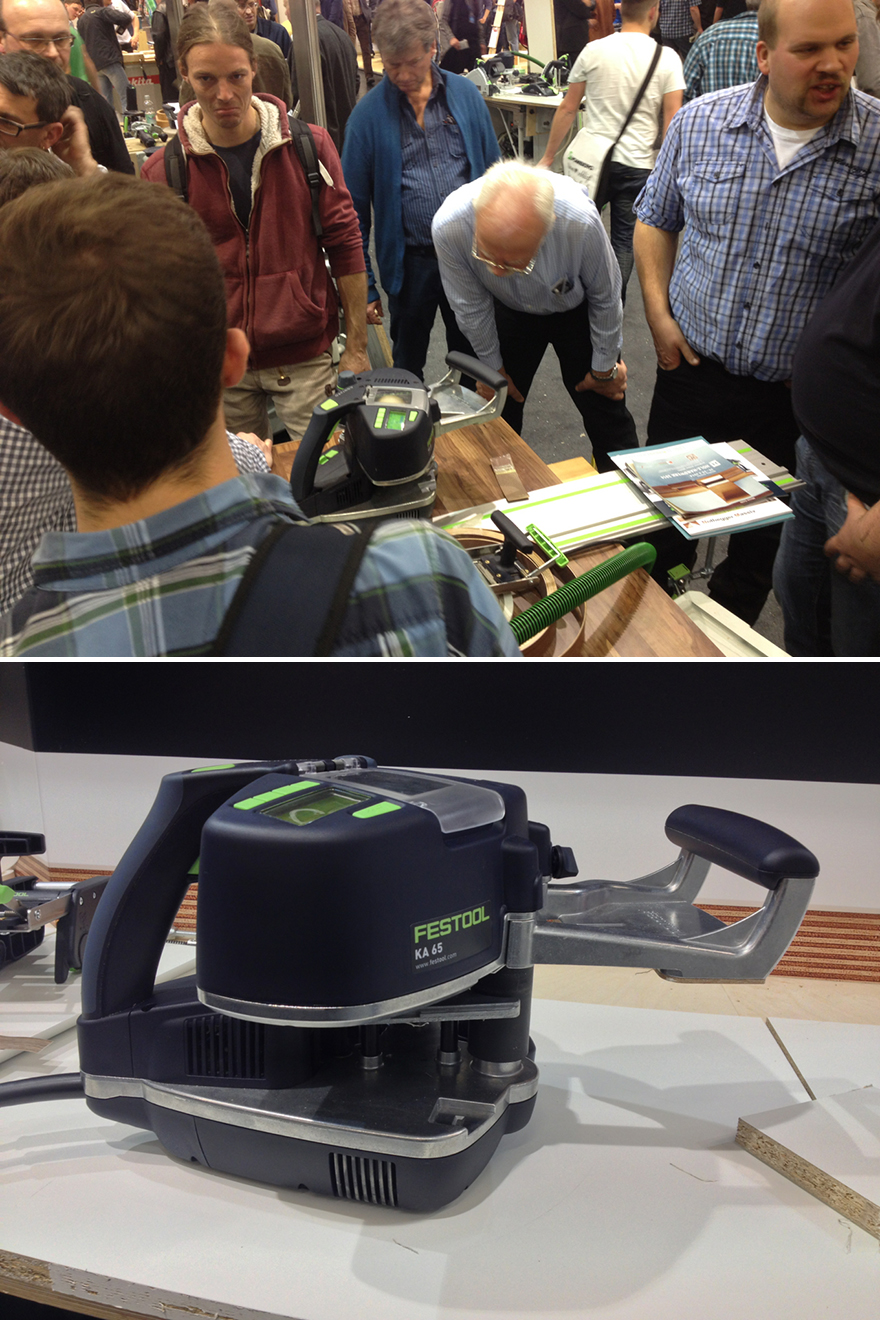 Germany's Festool makes amazing power tools, so I expected their booth to be as mobbed as it was at Holz-Handwerk. But there was one repeating demo in particular that seemed to draw inordinate crowds, that being for the machine above, the Conturo KA 65. So what the heck is it, and what does it do that caused such a stir? Well, have a brief look at the (admittedly crappy) video I tried to capture by wriggling in and out of bodies:

Yes, it's a portable edge-banding machine that can do curves (both concave and convex) as well as beveled edges! And unsurprisingly Festool seems to have thought of everything when designing it: For you furniture designer/builders who work with plywood or (shudder) particle board and need to cover those raw edges, you know how frustrating edge banding can be—you can spend $300-plus on a fiddly machine while resigning yourself to only designing pieces that have straight edges. Aligning the two guides can be like performing neurosurgery, and once it's all done you can still screw the whole operation up by making a sloopy end-trim with a pair of snips. But by designing the Conturo to have one point of contact, curves are no prob, and they've designed a handy snipping accessory to snip the waste just right.

The following, professionally-shot video shows the entire process of edge banding using a Conturo from start to finish, including the post-application role of the trim router and a handy little scraper. (By the bye, the UK-based demonstrator refers to edge banding as "lipping." Discuss.)

Now I know what you're thinking: "What if I'm working on a smaller piece, and I don't have that fancy vacuum clamp to hold it in place? With conventional clamps sticking up, it would be impossible to get the machine onto the edge, no?" Well yes, it would, and the designers have realized that, which is why you can do this:

Still more of you may be wondering how you can use this to edge band the interiors of a step-in. Yeah, they've thought of that too:

And finally, here's how the Conturo does beveled edges:

Oh, and guess what, my fellow Americans: The Conturo's not available on our shores! I'm told that the Brits negotiated a deal with the Germans to not bring the machine to the U.S. until we agree to refer to edge banding as "lipping."