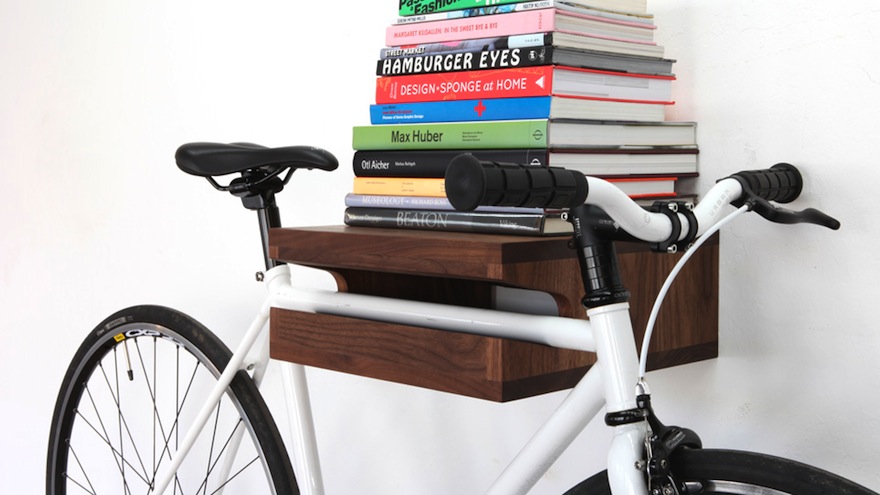 Bicycle owners with garages have an obvious place to store those bikes—but what about those without garages: apartment dwellers, etc.? Those end-users may want to store their bicycles in their living spaces, and they'll want their bike racks to look good. Since floor space will probably be limited, wall racks have a lot of appeal.

Designers are recognizing the need, and addressing it in various ways. The Bike Shelf from Knife & Saw is designed to be installed into wall studs, and will leave only screw holes when removed—another consideration for those in rented spaces. The shelf gives you a bit of extra storage, although I wouldn't put anything too fragile up there, since it seems like it would be easy to jostle things while putting the bike away. And one drawback which you'll see in many designs: the shelf works well for top-tube bikes, but not for diagonal-tube bikes or step-through bikes. 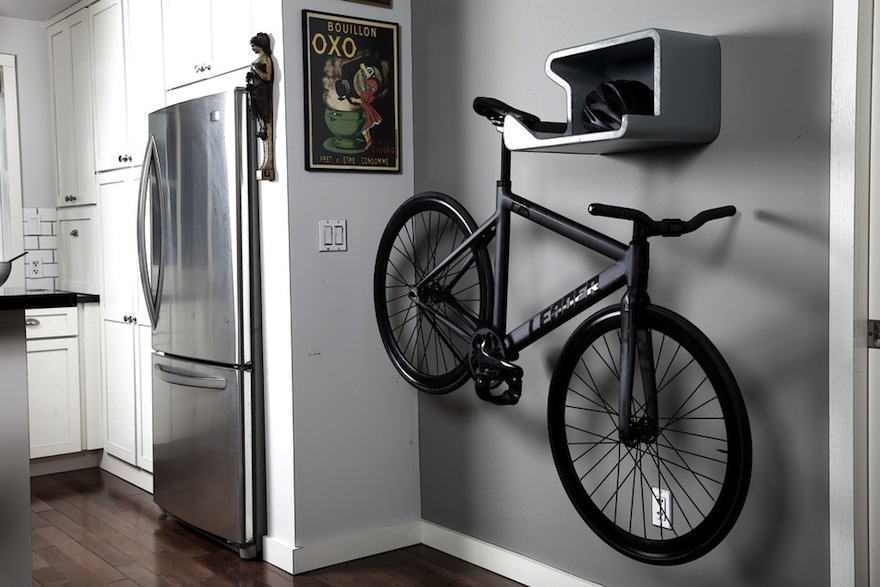 The Shelfie is an active Kickstarter project which has already met its funding goal. Juergen Beneke wanted a solution for all types of bikes, because he owns a range of them himself; he also wanted to avoid scratching the paint on the top tube and kinking the cables. The Shelfie addresses these concerns by using the seat to hang the bike. The storage compartment is large enough for a bike helmet, which is a considerate design touch—since the bike and helmet are used together, it's helpful to store them together. Shelfie comes with anchors for sheetrock, wood and concrete/block—and a paper-template with the hole-pattern, to make pre-drilling the holes easy and accurate. My one concern here is how stable the bike is; will a rambunctious child or an earthquake cause it to tumble?

The Bike All from Board by Design also uses the seat to hang the bike; it has hooks for hanging the end-user's helmet, messenger bag, etc. The top shelf has a cut-out, allowing end-users to run the cord from a cell phone (or anything else) down to an outlet for charging. One concern: If one wheel rests on the floor, cleaning the floor becomes slightly more difficult than if the floor is left bare. 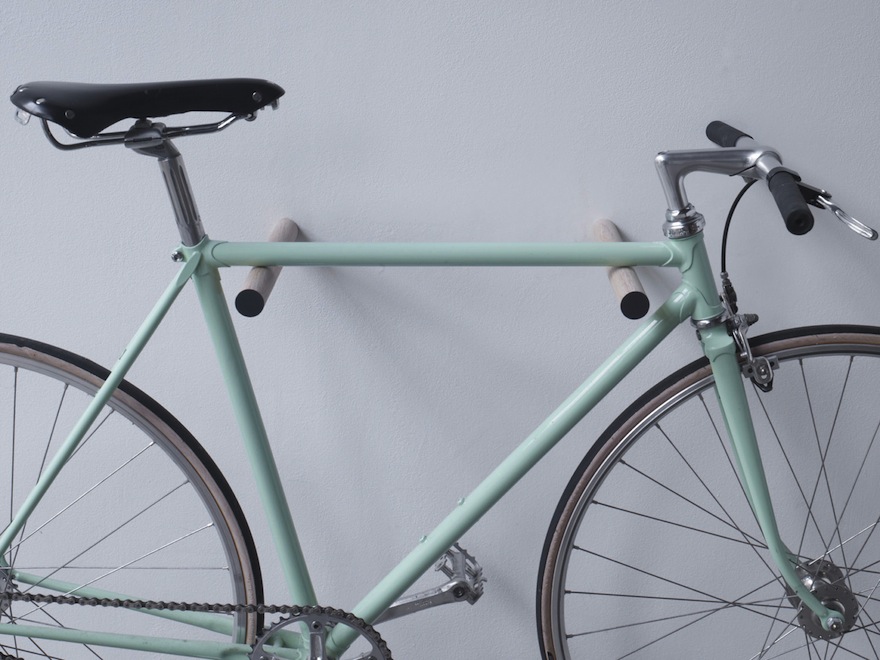 Fluo makes wall-mounted bike hooks for a specific subset of bike owners: those who like minimal design, own a light sports bike (with a top tube), and have a wall that will work with its dowels. They're suitable for walls made of brick, concrete and masonry, for those ready to break out the hammer drill; they will not work with drywall. This is another design that would make me nervous if children, pets or earthquakes were likely to disturb the bike. 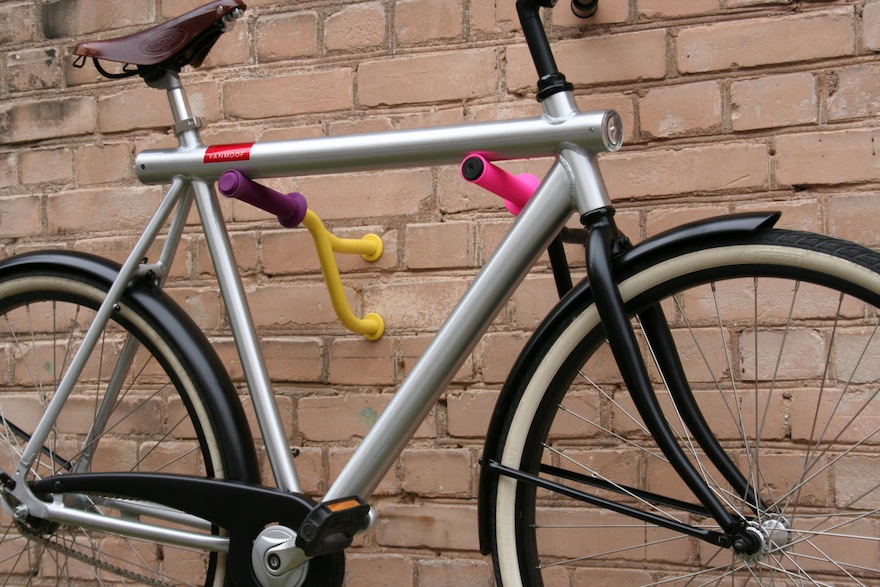 This bike hanger from Furniply is the same basic idea; it will work on concrete, brick, wood or plywood; using on plasterboard is "at your risk." The grips are added to the metal hangers to prevent scratching. 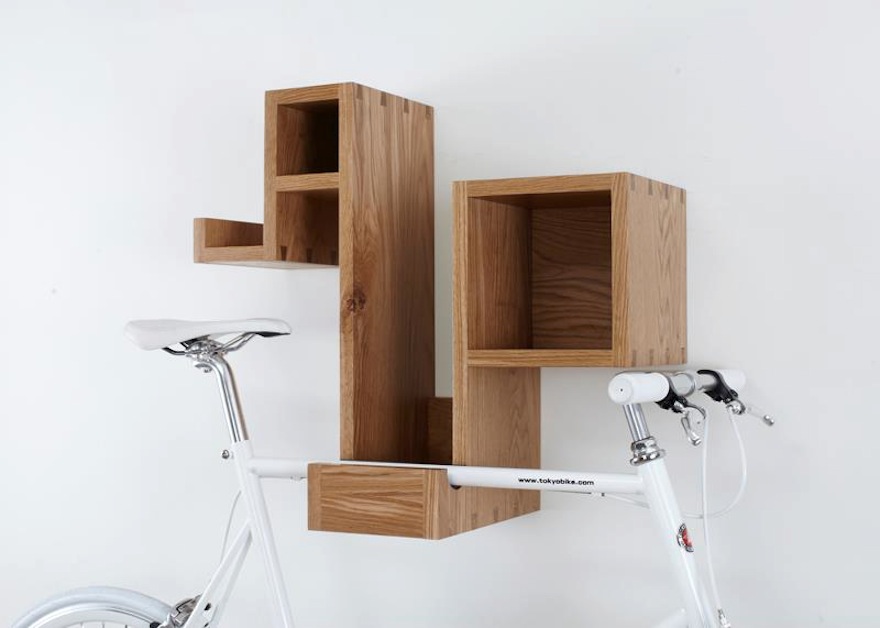 To provide more stability, many designers use some sort of notch for the bike. Tamasine Osher's Pedal Pod combines a bike rack with a nice amount of storage; the end-user would need to be sure the bike's handlebars and seat weren't going to hit those top storage units, though. 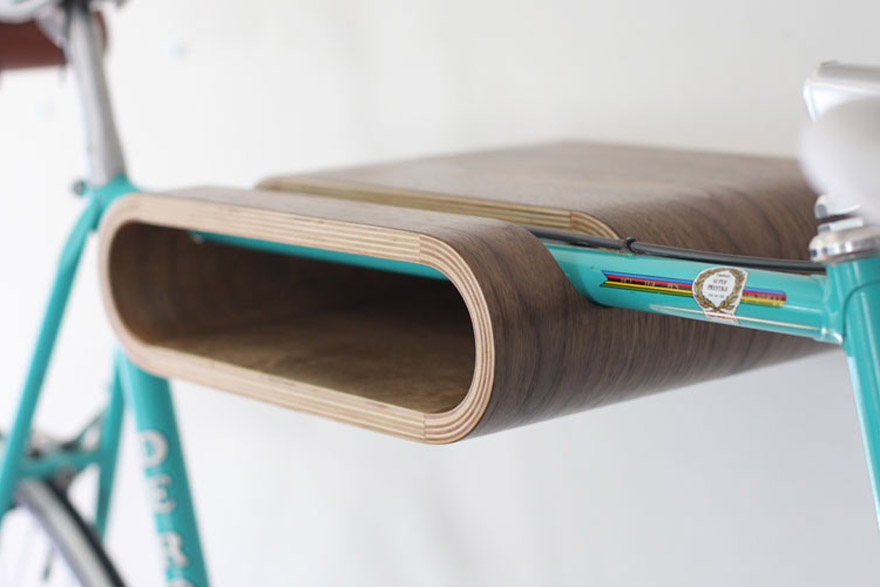 Daniel Ballou's Very Nice Bike Rack is intended for top-tube bikes weighing 25 pounds or less. The interior section here provides a nice space to store small items, with less chance of them falling off than on an open shelf. 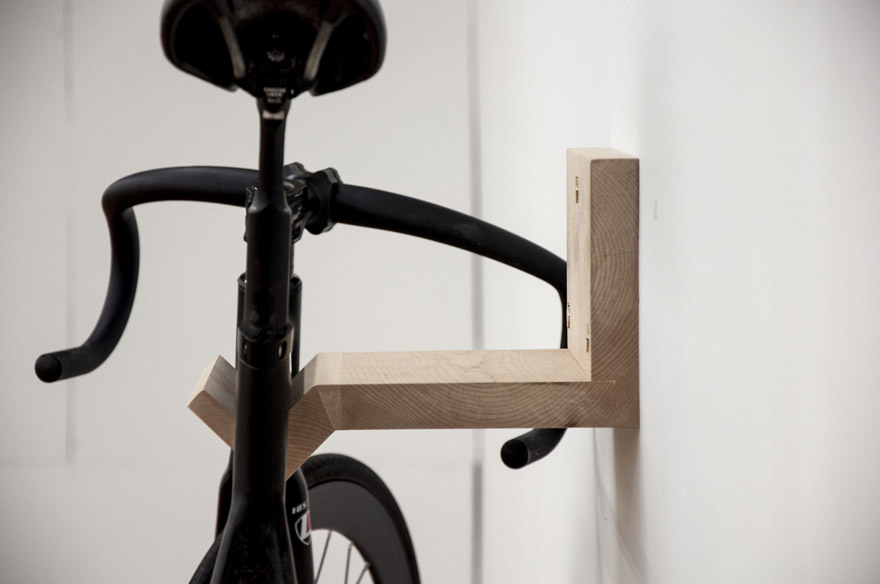 The Make Bike Rack uses three bronze screws to hide the mounting screws. Make mentions that this rack is intended for bikes with a maximum handlebar length of 19 inches—handlebar length would be something to consider on all such racks, so calling this out for the end-user is helpful. (Yes, you could figure it out from the dimensions, but an enthralled end-user might not think about handlebar width unless it's specifically mentioned.) 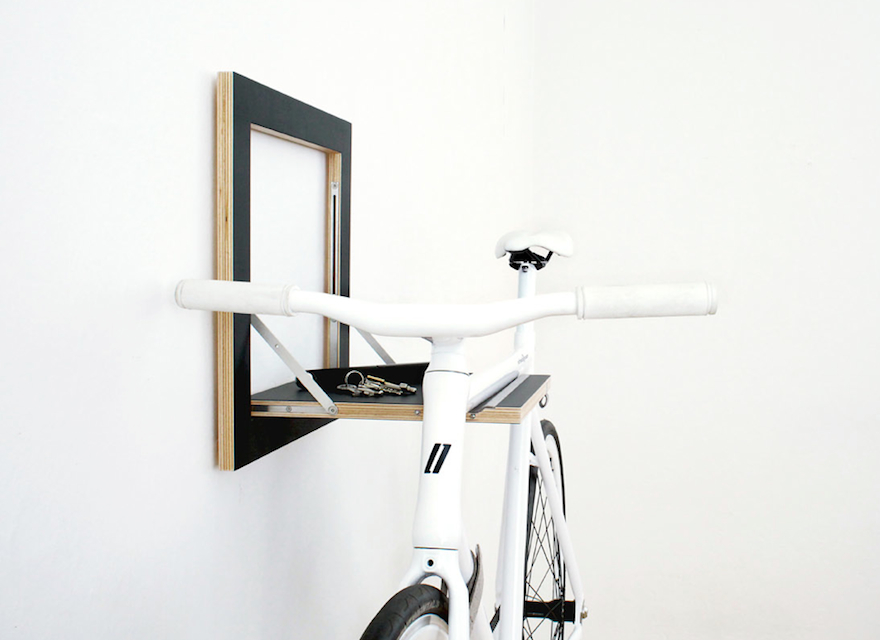 The SLÎT from Mikili folds up when not in use—so there's nothing to accidentally bump up against. The felt lining on the trough the bike sits in would help reduce any problems with scratching. 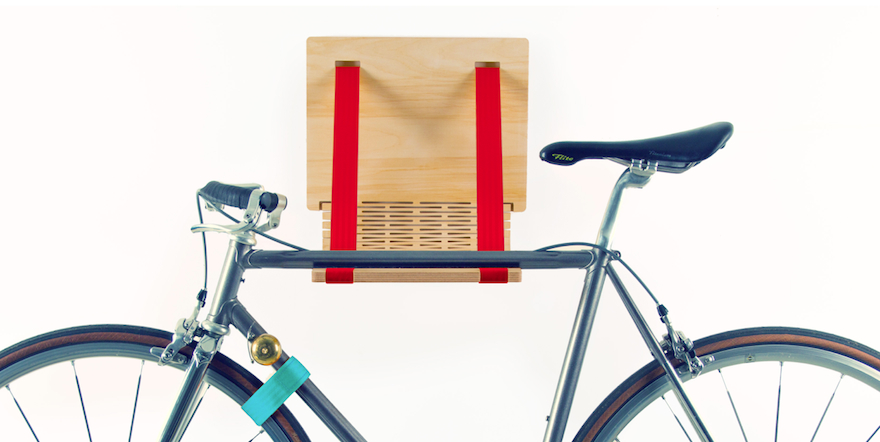 The Bike Dock from .flxble also has a trough lined with felt, although you can't see it in this photo. The straps are available in 12 colors, allowing for a nice burst of color—as long as the end-users don't do a major redesign where that color no longer fits. I appreciate that this company makes it very clear which bikes it will work for: ones with a horizontal or slightly sloping top tube at least 13.8 inches long, handlebars no more than 23.6 inches wide, and a weight of 44 pounds or less. 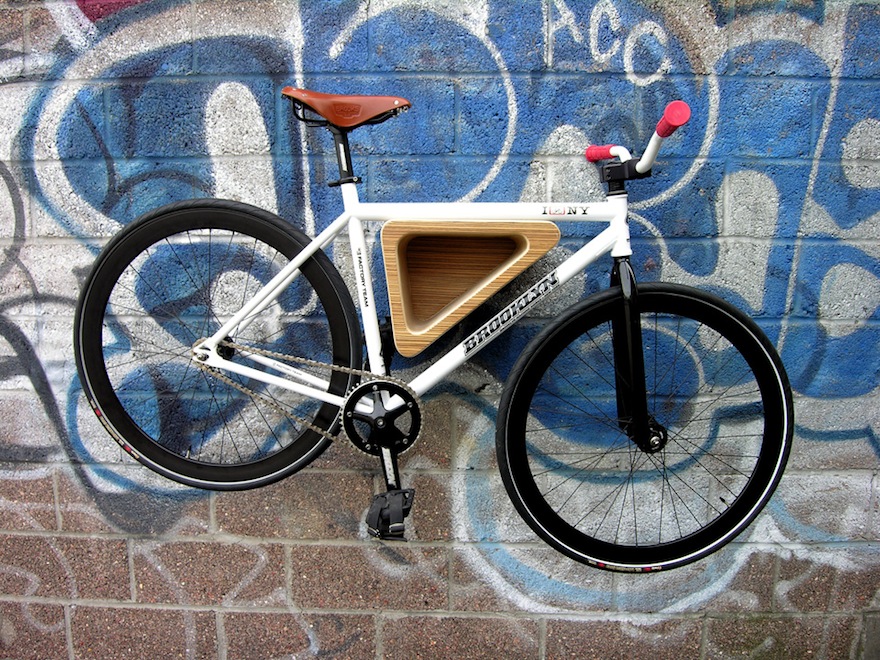 The Bedford Ave Bike Rack is custom-made to fit the end-user's bike frame, so it's something for end-users who know they'll be keeping their bikes (or replacing them with ones with the same frame dimensions) for a long time. The angle of the storage section somewhat limits what the end-user might stash in there. 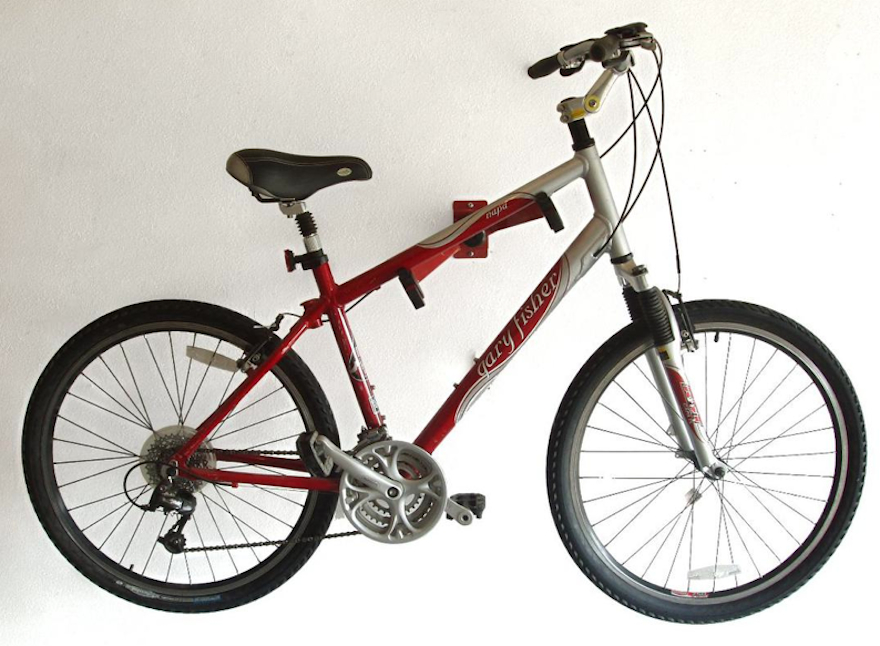 This bike rack from Gear Up has a pivoting feature that "allows cyclists to adjust the load arms to hold bikes with non-standard frames perfectly parallel to the ground." From the photos, it's hard to see exactly how the rack holds the bike in place, but I'm glad to see another design that works well for diagonal-tube bikes. 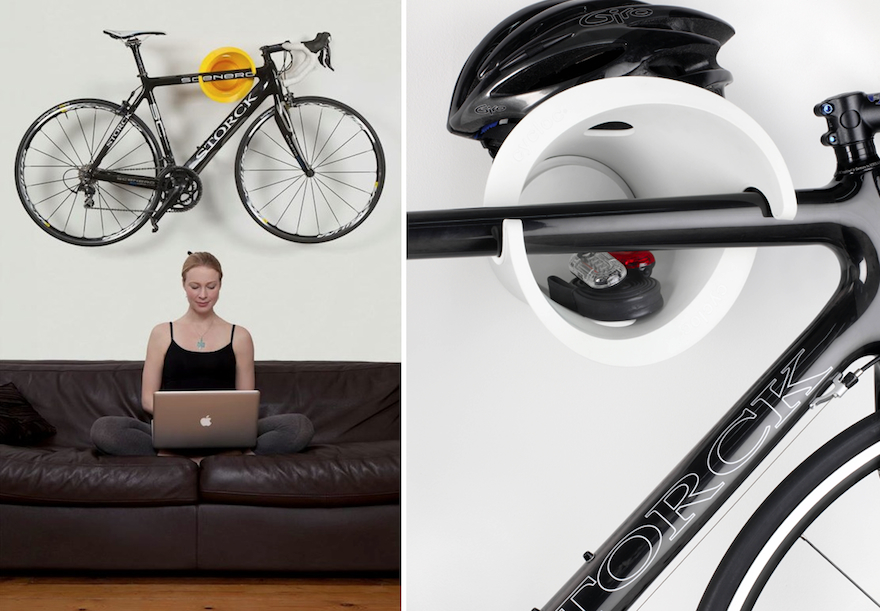 This Cycloc bike rack, called the Solo, is one we've written about before. You can tilt the Solo, and use it to mount many kinds of bikes: horizontal top tubes, slanting top tubes, step-thoughs, etc.—although there are some bikes which might not work. Since the contact points are rubber, this rack wouldn't scratch the bike's frame. 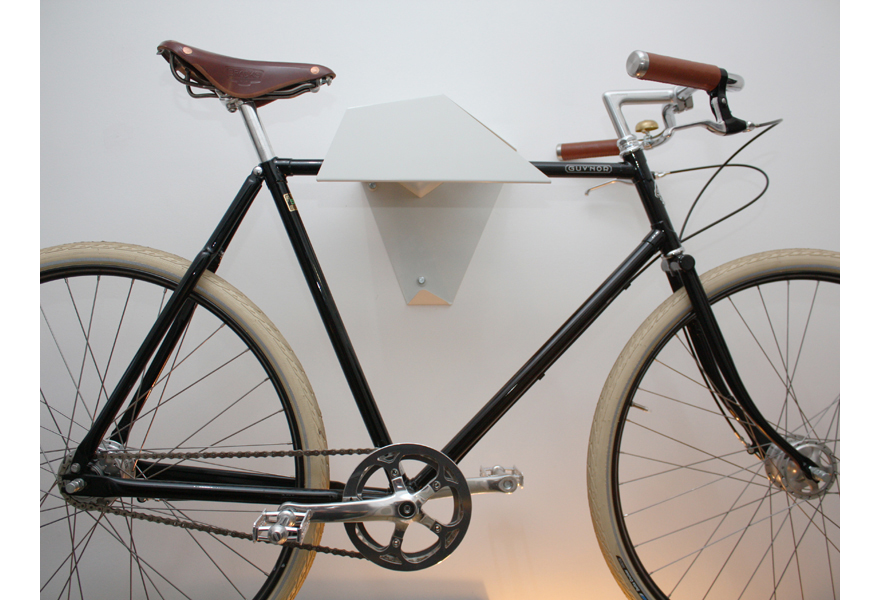 We've mentioned the Hood from Quarterre in a prior post, too, but it's another one worth a second look. A bike helmet can rest on top—always a nice touch. It's made from folded steel, and uses leather trim to protect the bike frame. All that steel would still make me nervous about scratching, though, in the process of putting the bike away; the leather is only found in the place where the bike rests.